In 2004, the world was in a completely different state. The Cubs hadn’t won a World Series since 1908, hipsters weren’t putting bacon on everything, and the Great United States of America hadn’t experienced a coup featuring giant robots. That is, until a fairly obscure Xbox (that’s right, the original Xbox, powered by Microsoft) title known as Metal Wolf Chaos dropped into international waters and strangely missed the Western market. This was during an era when From Software was making mech combat tiles and obscure Western-themed JRPG’s rather than just focusing on the latter. Now, with the publishing arm of Devolver and the legwork of General Arcade, President Michael Wilson’s cross-country story can finally be told to a global audience with Metal Wolf Chaos XD. What does the XD stand for, you might ask? Why, ‘we love RichXrD Hawk’ of course!

America hasn’t truly experienced a coup in its bicentennial history where the Vice President successfully kicked the leading member out of the White House. If it weren’t for a conveniently placed mecha combat suit left lying around the White House, President Wilson might otherwise face an impossible task of taking back America. It may be a long journey (okay, not that long. Expect about five-ten hours at most) to go from sea to shining sea to usurp control back from the antagonist Richard Hawk, but if anyone’s going to make America great once again, it’s going to be the President of the Great United States of America leading the way.

Metal Wolf Chaos XD exists in a period of time when From Software made the occasional action game in addition to the cryptically difficult Kings Quest series. Shortly after new Armored Core releases and the two Xbox-exclusive Otogi titles, From Software took those action-focused titles to create a new style of mecha combat game. Draped in the American flag and Lucas Motor Oil pumping through his mecha joints, President Wilson’s love for his country is equally matched by his prowess in battle. Through the use of a boost motor, the mech’s mobility can quickly dash side to side, jump and hover in the air, or rush towards the ground in an explosive ground pound that can make quick work of infantry soldiers. Given how early Metal Wolf Chaos exists in the modern action genre, this doesn’t quite work as well in action. The boost gauge depletes far faster than could be useful to easily evade or quick boost like in later Armored Core games. Instead, you’re routinely left plodding around with the occasional sprint that only lasts a few seconds.

Armored Core may have been From Software’s premier mecha combat game, but there’s one thing it’s certainly missing: twice as many guns. From the shoulder-mounted pods on President Wilson’s Metal Wolf, players can wield four different weapons in each hand and swap them freely as long as they have the ammo for them. Handguns, rocket launchers, railguns, flamethrowers, and more can all be mixed up. Some of the more powerful ordinance, such as railguns and sniper rifles, require to be wielded in each hand, taking up two of President Wilson’s equipment slots. With how much damage these weapons can produce, losing a slot that would’ve been otherwise wasted on a machine gun is worth the tradeoff. Once you reach the dozen mission mark, wielding one or two MG200/EN machine guns is a near requirement to clear out objectives in time.

Michael Wilson’s adventure to retake American consists of over a dozen missions from sea to shining sea. From the Chicago suburbs to the Grand Canyon, the various stages are all slices of Americana that each feels unique to one another. Some missions require a gentler approach to navigate treacherous terrain in your all-terrain mecha suit, another has you destroy poison gas dispersal tanks before the city becomes too contaminated to breathe. For as much as Vice-President Richard Hawk wants to control America, he really isn’t doing a great job of keeping his citizens alive and happy if he keeps rolling his military forces in with various types of super weaponry in hopes of crushing President Wilson and the resistance.

Metal Wolf Chaos XD doesn’t have any new, amazing enhancements such as new stages or weapons, but rather is simply the shiniest and polished version of Mr. Wilson’s vision for a reunited America. Aside from touched-up HUD elements and sharpened visuals, this Metal Wolf’s day out is otherwise just as fans would remember from the good old days of the OG Xbox. Fire and explosions simply don’t hold up after a decade and a half, and depending on how intense your attacks may be, can tank the frame rate pretty quickly. Thankfully, this only happens in a few isolated incidents and Metal Wolf Chaos XD otherwise adapts to the current generation of console quite well. It doesn't come anywhere close to looking like anything more than a smoothed out title from a couple of generations ago, but surprisingly, Metal Wolf Chaos XD does still stand up as a halfway decent action game, even if the action is more than a decade old.

In perhaps the most obvious sore spot for Metal Wolf Chaos XD, the sound can be utterly atrocious to listen to. The English dub is overdramatic and hammy, just as it was when it was released in 2004, and while there’s nothing negative about some cheesy dialogue, being able to hear it is a completely different story. Metal Wolf Chaos XD could certainly use some fixes in the audio mixing department, however. Any minor explosion or background noise can easily drown out the dialogue between President Wilson and his mission handler and without subtitles, I wouldn’t have been able to make any sense of their mid-mission banter. The same goes for the regular sounds of war: bullets and explosions never came out at the right volume and the two would regularly fight to be picked up on my headphones.

In a lot of ways, Metal Wolf Chaos XD embraces the jankiness and leans into it much like the same way that Earth Defense Force handles itself. If you’ve grown tired of hunting down aliens and want to fight something more down to Earth (and don’t worry, there *are* still aliens if you hunt for them on New Game Plus), that same over-the-top style of combat carries over from EDF into Metal Wolf Chaos XD. After Earth Defense Force Iron Rain and the half-dozen other EDF titles before it, I’ve grown fond of janky action games if they can give me enough weapons and firepower to blast through the annoying bits. While President Wilson’s weapon count barely reaches a hundred, some of them are quite powerful indeed. And, as this is a From Software title, you might even catch a couple of signature cameos from that certain Miyazaki series.

Metal Wolf Chaos XD is one of those titles that I was always surprised never got localized for American audiences, especially when it combines two of the things any American can agree on: patriotism and giant robots. As a campy and janky action game, President Wilson's course to retake America is finally available for Americans to celebrate and enjoy the explosions in lieu of lighting sparklers in the backyard. A perfect action game, this is not, but no other game can so perfectly encapsulate what makes America such a great and unique country to those outside. 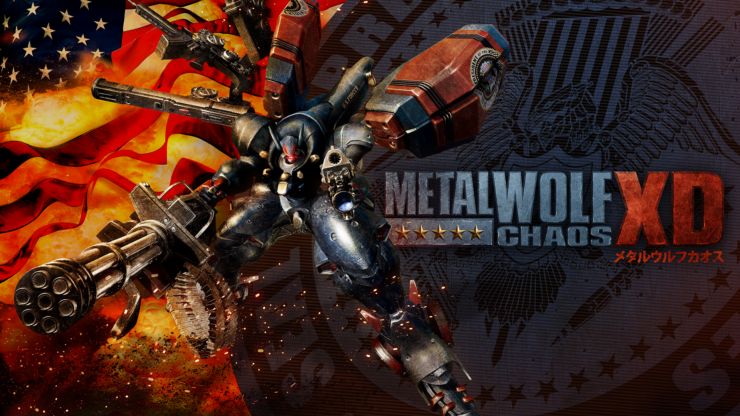 Devolver Digital and General Arcade have slapped a new coat of USA flag paint on From Software's patriotic action game without smoothing out any of the imperfections that come with a combat system that's aged less than gracefully over the past decade.

Elden Ring: 7 Tips to Survive the Lands Between