I have to admit, I’ve never encountered a game that apologises for what it is before I’ve even had the chance to play it properly. What exactly am I talking about? Well, Medieval Kingdom Wars is the game in question and Reverie World Studios, the developers, placed a few lines at the end of the tutorial. It’s something that honestly caught me off guard and had me laughing, mostly with disbelief.

So what exactly did the developers say at the end of the tutorial? “From our small indie team, we would like to thank you for playing Medieval Kingdom Wars” and "we hope you won’t judge the project created by three humble developers too harshly!”. They ended it with “We are here to tell a story and provide an alternative in the grand strategy genre. Simple animations and aged graphics aside, we hope the journey is enjoyable. Medieval Kingdom Wars is our labour of love, and we’re happy to continue developing it, bringing you free updates and expansions in the months to come…”

I’m really going to look like a cruel, heartless git if I butcher the game, aren’t I?

On that note, let’s have a look at something already covered by the developers – the aesthetic quality of Medieval Kingdom Wars. Frankly, they’re not far off the mark. The game does look pretty dated, with a fairly large repeat of models and textures, most of these can't exactly be called great quality - though I won't go as far as saying they're ugly. They are exactly as Reverie admitted they are, aged. It's something that permeates throughout the game, a sense of it being an older game, though not necessarily a game that has aged well.

This is to say that I can certainly see a wealth of potential beneath the game. There is honestly a gem beneath the surface. Maybe not a diamond, possibly an Emerald. Partly this is because of the sheer ambition of the game. Very rarely does a grand strategy title also feature real-time strategy battles with base-building and resource management. Then add onto this a city-building element, though a limited one at that.

In keeping with the aesthetics, I can't say I'm a huge fan of the world map, nor the in-battle unit or building models. The problem with having a big town to fight in is size and variety. If you don't have the variety to fill that down it all looks just a bit bland. Whenever fighting on maps of major settlements you find so many copy-pasted blocks of the same buildings and it honestly takes away from the game. It's a shame because, while the units are adequate, their effects are splendid. Actually watching the fire spread on the pitch that you have placed down, surrounding and burning the enemy is great. Indeed, the major combat elements like siege weapons, defences and unit special abilities actually look good.

It's a shame that it's all muddled out by a downright terrible UI to look at and use. In battle or on the world map, buttons are too close together, you can't easily move between selections and even hovering over a selection can take too long, or require a bit too much precision, for the game to recognise what you want. It also doesn't help that the world map is just a bit cluttered. If it isn't shadows, it's trees. If it isn't trees, it's your units. If it isn't them, it's icons, names and the majority of the UI.

The problem is how close to decent the UI is. Spacing buttons apart and defining the edges that bit more to make them pop could have worked perfectly. It's a shame because it's all perfectly in fitting with the theme and setting of the game. This is much like the audio of the game - bar the voice acting, which is laughably bad - which at least uses instruments and themes from the era but, much like the visual design, it can find itself cluttered at points. The more I think about it, the more that cluttered is the perfect word to describe the game.

I'm a proponent for the varied game modes found within Medieval Kingdom Wars. The grand strategy element is similar to that of older Total War titles, from similar functions on the grand-strategy map to jumping into a battle or allowing you to auto-resolve. Actually taking part in these battles is surprisingly engaging, particularly when you've researched further advancements in formations and units, increasing tactical options. Partly this is because you also have the ability to build up a base of sorts when laying siege to a city, having the game act more like a general RTS title with resource management elements and more.

This isn't to say it's ideal. One big problem is how unresponsive and generally wonky, for lack of better word, it can be. More than a few times I've been clicking units and telling them to go somewhere, for the game to take my commands as more of a suggestion. "Man that wall" I would tell a unit of archers, for them to stand around the gate below the wall. Thanks for that lads. Though the units don't seem to want to do anything right, ever.

As mentioned earlier, there is also a city-building element. You can jump into one of your cities at any time and build it up using resources, rather than silver which is the currency on the grand campaign map. Strangely, while you're in one of your cities or villages, their happiness lowers - no real reason given, though it's likely to stop people sitting in a city as there's no movement in the grand campaign while there. One minor annoyance for me is that you can position your units ready for a place being attacked, but every time you jump back in they've moved slightly, often cutting through walls or elsewhere. This is especially irritating when you come to defend a settlement and then have to start moving units to where you last placed them.

If anything, there's actually a little too much overlap and things going on. You have a currency that's only used on one screen. Resources that are only used on another. Top it all off with a whole host of resources that are primarily gained from specific cities or from winning battles and taking them as spoils of war. These resources are then used to research new tech that unlocks new buildings, units, upgrades and economy-boosting elements. There's no time taken in research, it's all instantaneous, as with everything else, provided you have the relevant resources.

At least something is quick because everything else is agonisingly slow. I'm all for epic, time-intensive battles and long-play titles, but Medieval Kingdom Wars seems to be aiming for this through artificial means. Regardless of where you are, units are slow. On the map, your cavalry must be riding turtleback. In battle, the armour is weighing your troops down. Until you research the tech that makes the game quicker that is. Due to how slow it is, it's hard to actually get yourself engaged in the game. Too much of the time is spent bored, rather than engaging yourself with what could be an engaging game with emergent stories as you expand from a lowly lord to the ruler of your nation, to the possible ruler of Europe.

Reverie, if anything, need to learn the concept of "less is more". The gameplay elements featured in Medieval Kingdom Wars could certainly have been made into a great game, had the basics been focused on and more focus placed on the look and function of the game. Combat is good and the campaign has the ability to grip you, for a time, the problem comes with rather pointless elements like the bare-basic city building and just how slow the game feels and gets, leading to boredom.

One other issue, which will become clearly visible in the gameplay, is just how sluggish the game gets when there's a lot on screen. Jump into a large city or a battle with a significant number of troops, you're going to notice some significant stuttering. I'm regularly able to play the latest games on maximum settings, with rarely a large hit on performance so this took me somewhat by surprise.

All in all, Medieval Kingdom Wars is a very ambitious game, one that certainly has the potential to be far better if Reverie sticks to their promise and keep up with updates and fixes. At the moment it's a little better than adequate, it can even be good at times. It just has a few too many flaws and can hit too many boring patches, preventing it from reaching that higher level.

Copy provided by the publisher. You can purchase the game on Fanatical. 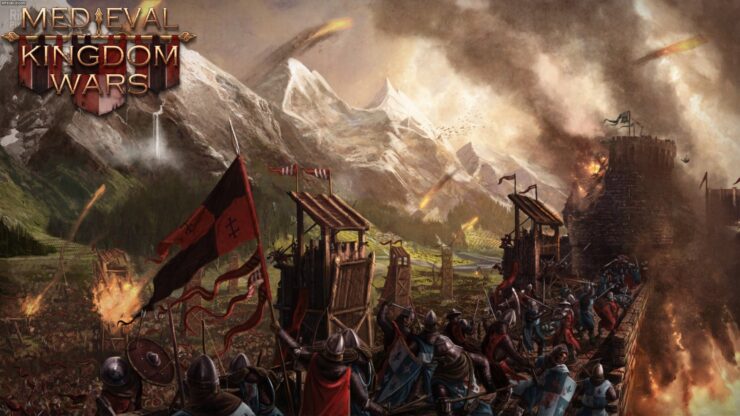 Medieval Kingdom Wars is a very ambitious game, one that certainly has the potential to be far better if Reverie sticks to their promise and keep up with updates and fixes. At the moment it's a little better than adequate, it can even be good at times. It just has a few too many flaws and can hit too many boring patches, preventing it from reaching that higher level.