Medal of Honor: Above and Beyond

Medal of Honor used to be the place to go when it came to a compelling single-player first-person shooter. EA had the market locked down for somebody who wanted a good storyline and then close-quarters multiplayer action with Medal of Honor and had the market locked down for huge open battlefields with the aptly named Battlefield series. The series dropped off, was reborn, then seemed to die again following the abysmal Medal of Honor Warfighter. Now it's time for Respawn Entertainment (Titanfall, Apex Legends & Star Wars Jedi: Fallen Order) to have a go with Medal of Honor: Above and Beyond.

Interestingly, some key names at Respawn Entertainment were involved in earlier Medal of Honor titles. Producer Peter Hirschmann has gone full circle; he produced the first Medal of Honor and is now producing Medal of Honor: Above and Beyond. Vince Zampella also returns to the series. He was involved in the development of Medal of Honor: Allied Assault before creating Infinity Ward and then Call of Duty. Is this return all you could hope for?

Well, that's a hard question. I imagine that sentence immediately answers the question. Part of your experience will depend on what VR headset you've got and if you have the patience to sit through more sequences than your average shooter, also if you're the sort of person who isn't outraged at the merest hint of a bug. You also need to be the sort of patience that can put up with your game freaking out at times and getting confused like a dog trying to get a toy through a glass table. It's comical, even endearing if you're that sort of person.

I am, to an extent. I don't honestly want to talk about the game part of Medal of Honor: Above and Beyond. Not yet. What I want to talk about is the gallery. When the original Medal of Honor was released, it was a project envisioned by Steven Spielberg, of all people, to teach people about WWII through an interactive medium. Of course, it still had to be a game, so it was never going to be an accurate telling of the war, but it made an effort and - at the time - had a gallery featuring archival footage. Above and beyond, fittingly, goes above and beyond.

As somebody who has always keenly absorbs anything possible about that period of history, the gallery feature here is fantastic. The number of veterans from WWII are, sadly, very few and far between. The team at Respawn partnered with Honor Flight to bring the veterans they worked with to Europe, to the places they fought and, sadly, saw their friends and comrades die. I'm not ashamed to say that the clips I've seen in Medal of Honor: Above and Beyond have brought tears to my eyes. Very much like the interviews from Band of Brothers.

Anthony Giacchino, the director of the gallery, the interviews, and the subsequent documentary shorts that have featured at such as the Big Sky Documentary Film Festival, should be proud of himself for the work and the incredible heart that has gone into this. Peter Hirschmann and other Respawn members also participated in the gallery side of the game. It wasn't necessary, but it is commendable. It allowed them to get a sense of what they are working with. If they were to release these documentaries as DVD, Blu-Ray, or Digital Download, I'd be the first in line.

The issue is that this moving piece of work is tied to Medal of Honor: Above and Beyond. I don't mean that as the slight it seems. Still, there's no doubt that the audience for such a documentary likely has a minor overlap in the Venn diagram of those who watch documentaries & interviews of WWII veterans and those who want to jump into the latest EA shooter. Even smaller when you include the third factor that it's a VR exclusive title.

I would say Oculus Rift exclusive title because there's little doubt that the Vive was an afterthought. The other VR it supports is the index, but as for how good the support is, I couldn't say. I mention this before even talking about the game because of the impact it has on the game. At the time of writing, a week after launch, the game doesn't even have buttons mapped for the Vive. You have to go into Steam VR and map them all yourself or, what I did, download something from the workshop that somebody else did. Otherwise, you can't even accept the terms and conditions and start the game.

Once you do get it working, there are very few VR games I've played that feel as accomplished as Medal of Honor: Above and Beyond. At least the playing of the game. For now, I'll stick to the negatives. More than a few times, I've burst out laughing, which is inappropriate considering the setting and general nature of the game. Why? The characters just look off. Their eyeballs protrude; it all adds to the mannequin-like grins and creates a horrible lifeless quality.

On that subject, the whole thing feels lifeless. It certainly is tone-deaf. Moving between the game to the gallery genuinely feels like you're moving from a Horrible Histories version of World War II (if you've seen the film, you know) to Band of Brothers. Respawn, if they wanted to focus on genuinely educating about World War II, desperately didn't need to team you up with characters that feel like they would fit in 'Allo 'Allo! There's one character, a 16-year-old who faked his way into the army, that just always looks and acts psychotic. It's jarring. He wouldn't have been out of place in a German uniform in the Wolfenstein games.

Other issues are all VR related. One primary concern could simply be due to the fact I played it on the Vive. Hand-tracking was sometimes a little off. Aiming down the sight can have guns held at a strange angle or inside your face. Also, throwing grenades is more down to chance than any sort of skill. On the camera, more than a few times, you'll find that your view isn't attached to the character, letting you see a torso with legs. The other minor concern is that there are documents and records to collect in the game. The problem is that finding the few items you want to pick up is near impossible because almost everything can be picked up.

So what is good with the game part of Medal of Honor: Above and Beyond? I've spoken a lot about the outstanding gallery, little on the game. I'm going to be stuck using the same qualifier I've used before, for a VR game. Medal of Honor: Above and Beyond's campaign is good for a VR game. If I were playing it on a flat screen, I don't know if I'd be able to put up with how stop-start it is and the sheer number of loading screens. Wait, no, let's be positive. The campaign is meaty, coming in at a good 8 to 10 hours.

Some offer a sense of scale, and the action ramps up at times, but it's not like the action is always the best part of the game. Medal of Honor: Above and Beyond brings back the beats from the earlier games; it puts you in the shoes of an OSS operative performing missions of subterfuge, sabotage, and other similar actions. Indeed, you'll have several missions that task you with staying undercover, though you can veer off to an extent. You'll even find a major returning character in the form of Manon Baptiste, with her sister Juliette taking a starring role.

A good number of levels are exceptionally detailed, and the AI, while as dense as concrete, puts up a challenge. Speaking of concrete, I mentioned how you could pick up practically everything in the game; you can also throw them at the Nazi's with the same accuracy as the grenades. Apart from knives, those little buggers seem to hate the Germans more than anything else. They home into them as if laser guided. It does add a sense of the world being interactable, allowing you to use your wits, distracting a German by throwing a pan at their face and either killing them or giving you enough time to reload and kill them.

When Medal of Honor: Above and Beyond is at its best, there's little more engaging than going around shooting the Germans. The options are highly accessible. Movement is smooth, the attention to detail in the maps is gripping, and the shooting is meaty and responsive. The game, when it's not stopping for another loading screen after a thirty-second cutscene, is genuinely fun to play. However, as I've made clear, it's when at its best.

I haven't mentioned the multiplayer yet. That's because there's not a great deal to say. You know about the shooting and the aiming issues I encountered at times. Still, I honestly had a good time with it. It's action, all action, though the number of human players seems small. The AI will fill in the gaps, but, as I've stated, it's as dense as concrete. Still, there's a sense of something more that doesn't seem to be there for me in regular shooters. I like the multiplayer.

Still, when I started to write this review, I thought this could be a 7.5. As I've written out the review, I know it isn't. I want to say it's good for a VR game, and technically, the shooting is excellent, the movement is smooth, and - even with the issues - it looks good and is immersive. However, the issues weigh the game down. It's a bit too stop-start, and, worst of all, the game does not do the subject justice, not when it's tied to an infinitely better series of mini-documentaries.

So do I like Medal of Honor: Above and Beyond? Well, I think I do, despite the flaws. Probably due to the hard work that's gone into it, not to mention the outstanding work that went into the gallery. Still, I wouldn't go above and beyond giving it six-and-a-half out of ten. 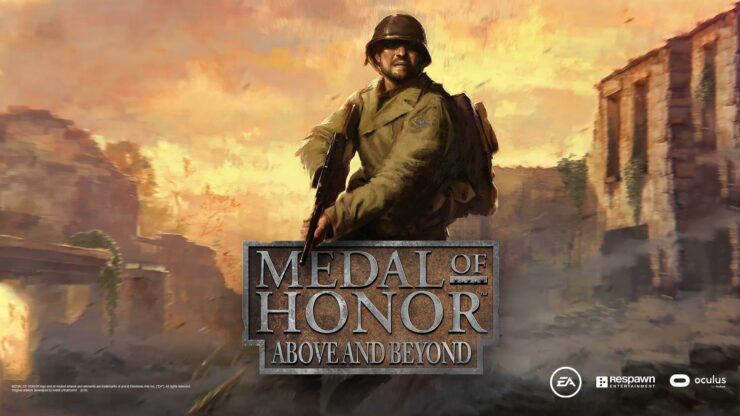 6.5
Wccftech Rating
Medal of Honor: Above and Beyond

Medal of Honor: Above and Beyond isn't the return to the series that I would have hoped. As a VR game is has a lot to offer, the gameplay is engaging, the missions varied, and both the single-player and multiplayer can be fun to play. However, the story is woefully mismanaged, with a cast of mostly unlikeable and unsympathetic characters - a tragedy when it comes with an incredibly powerful piece of work in the form of the gallery, a collection of documentaries and interviews with veterans of the war.