Mech games are a host unto themselves. They have a reputation hammered deep into the core of the games community for being difficult to play and even more difficult to understand. MechWarrior 5: Mercenaries does its best to change that perspective by cobbling some easier controls and a bit more action onto the side, but it is still a lot like those old hulking beasts at heart.

It's lightyears away from other mech games that come with their peripherals (Steel Battalion on the original Xbox comes to mind) and terrifyingly long user manuals, but still feels like it is misstepping, much like my own mech in-game.

Where MechWarrior 5: Mercenaries falls in line with the genre is in its story component. Mech games have a long history of entirely uninteresting excuses for mech combat and an unapologetic fetish for guns, and this one is no different. The galaxy is at war and for some reason, everyone is content to fight it out with giant robots. As a mercenary, you’ll be taking on contracts and choosing the sides that best benefit you, while a largely uninteresting story arc plays out with rival groups armed with equally unwieldy mechs. But they do carry the biggest guns, and you’ll spend a lot of time looking at these as you play MechWarrior 5: Mercenaries. They might all have more or less the same name, but you better learn the difference when you are arming and repairing your tank. It would have been nice to have some properly different weapons, apart from the obvious guns, missiles and lasers, but it would probably be difficult to telegraph these differences to the player in the heat of battle.

And the battles are fun, despite my misgivings. The battlefields your stomp across are surprisingly varied and the scars of wanton destruction will cut through city buildings with a lot of satisfaction. There’s even a coop mode if you want to invite up to three additional player-controlled mechs to destroy half a planet with you, just for the kicks. Outside of the fight you’ll be taking on contracts and managing your mechs, which works well and is a hallmark of the genre, though still isn’t made very interesting here. You’ll also have to seriously consider your funds because buying a massive killbot or a gun the size of a London skyscraper is going to cost a pretty penny.

The graphics are currently a bit of a letdown though, particularly since the raytracing features were temporarily delayed. While you don’t notice it during the fight itself because you’re too busy forgetting to push the brakes or change the settings so you don't have to (among other things), the extended cutscenes only serve to highlight the subpar quality of the visuals of MechWarrior 5: Mercenaries. And with screaming guitar riffs cutting over the top of the action, you’ll be forgiven for thinking this actually came out a decade or two ago, long before the industry learned the meaning of subtlety. This wouldn’t be a big issue if the cutscenes weren’t used early on to try and establish an atmosphere they just cannot hope to achieve thanks to the lackluster story.

Although the action in MechWarrior is a lot more approachable than other mech titles, the game still fails to grab the attention of more traditional shooter fans. Without the crisp maneuverability and speed of Titanfall players are still left feeling slow, clunking and very exposed in most situations. Hopefully the game will still find a home amongst the mech fans out there, although it is a considerably simpler affair than they are probably used to. For players looking to dip their toes into the world of mech combat, this is a good introduction to some of the challenges you’ll have to learn to enjoy. But, unfortunately, it doesn’t add enough to the genre nor does it excel in any particular department.

Addendum: It has been noted in the comments that the issue with the delayed braking can be corrected in the setting under 'throttle decay' so you don't have to worry about ploughing through an entire city, and it appears I missed this option in the setting when I first reviewed the game. although it doesn't mean the mech stops immediately, it does change the feel of the game. As a result, I have corrected the review score accordingly. 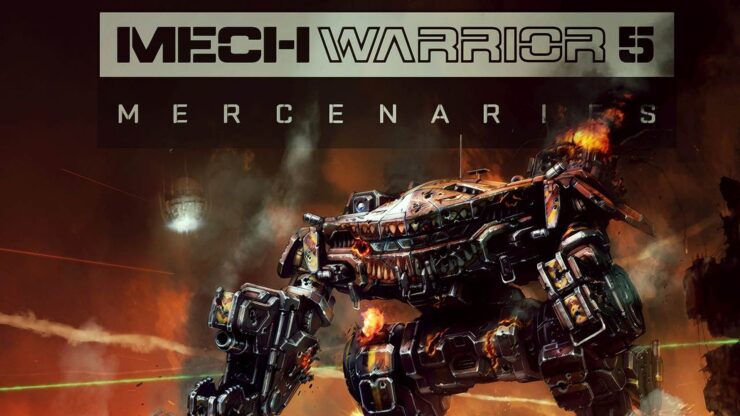 MechWarrior 5: Mercenaries tries to be inclusive but unfortunately doesn't quite succeed. Although it is fun enough to play around with, it doesn't do anything truly new or exciting to really make the genre stand out from the crowd of shooters.