The Marvel Comics universe has always been extremely popular, but the Cinematic Universe made it even more so, to the point that nowadays pretty much everybody can recognize heroes like Captain America, Thor, and Iron Man. Of course, everyone has their own favorite superhero and being able to make them team up to fight against all sorts of villains is a dream that all Marvel comics fans have had for a long time. The Marvel Ultimate Alliance series is the only one that allows this dream to come true, and with Marvel Ultimate Alliance 3: The Black Order, things are better than ever thanks to a renewed focus on the role-playing game mechanics originally seen in the very first entry in the series and a huge, varied character roster.

Marvel Ultimate Alliance 3: The Black Order features an original story written specifically for the game, so it is set completely apart from the rest of the series. From the very prologue, it's clear how the game's story takes heavy inspiration from the Avengers: Infinity War and Avengers: Endgame movies as well as from The Infinity Gauntlet storyline which featured the Infinity Stones and Thanos as the main villain.

During their regular evil curbing activities in open space, the Guardians of the Galaxy stumble upon a member of Thanos' Black Order, Proxima Midnight, exposing a plan to use the Infinity Stones to unleash cosmic chaos. Following an intense battle, the Guardians of the Galaxy are transported to the Raft, a prison which holds super-criminals, eventually managing to break out and learn through Nick Fury that the S.H.I.E.L.D. has formed an impressive alliance of super-heroes to stop Thanos from getting his hands on all of the Infinity Stones, now scattered and in the hands of other villains, and save the universe in the process. This critical mission will bring the heroes to many of the most iconic locations of the Marvel Universe, like the Avengers Tower, the streets of New York, the X-Mansion and many others to seek out the stones and take out the villains that are using them for their own ends like the Green Goblin and Ultron. 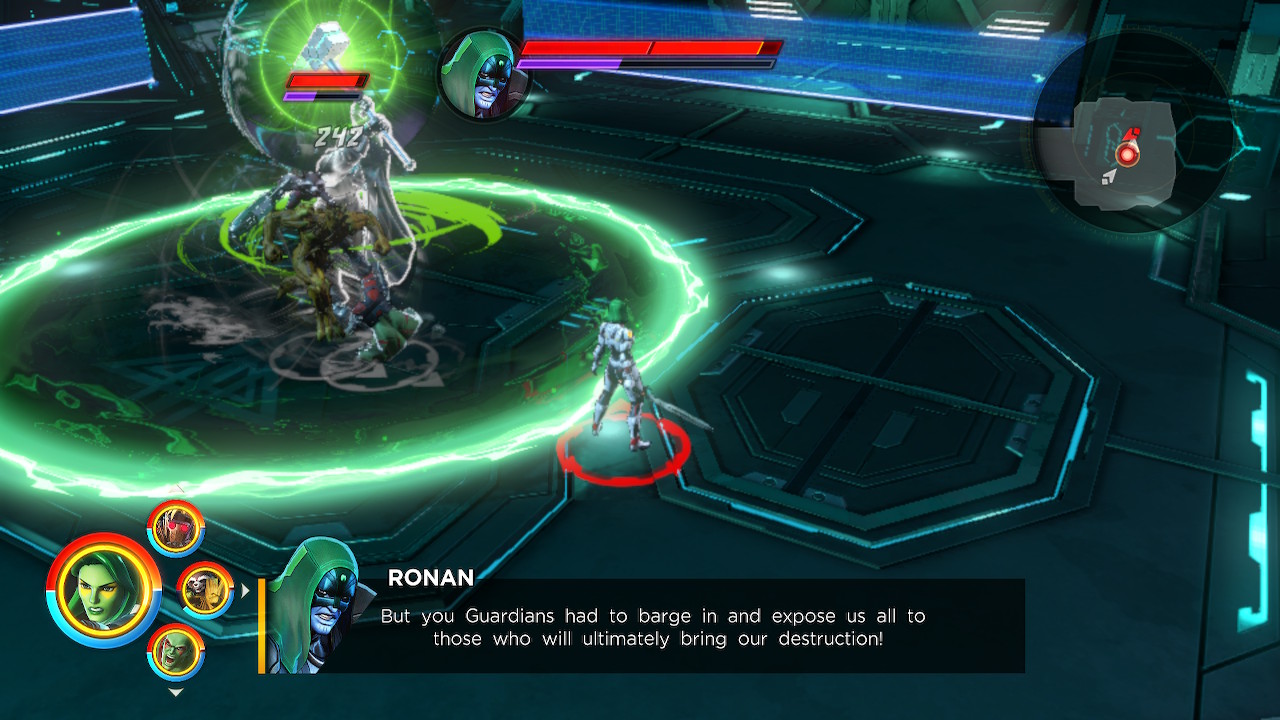 Marvel Ultimate Alliance 3: The Black Order's story is nothing particularly surprising, but seeing so many heroes and villains interact with one another will make all die-hard Marvel fans happy. The writing definitely helps, as it manages to capture the comic book-like spirit of most of the cast. While the plot lacks any real big surprise, there were a couple of interesting twists near the end of the game that definitely improved my opinion of it. Sadly, those who aren't well versed in the Marvel universe will feel lost at times, as characters are introduced extremely frequently in the first half of the game and most of the "minor" heroes don't get more than a couple of scenes in the entirety of the story campaign. An in-game Marvel encyclopedia would have helped those who are not exactly up to date.

While story enjoyment may vary depending on the player's knowledge of the Marvel universe, the gameplay of Marvel Ultimate Alliance 3: The Black Order is solid and fun, despite a couple of issues here and there that keep it from being memorable.

It's a hack and slash game at its core, featuring RPG elements with a strong focus on co-op where players control a team of four different heroes as they traverse a variety of locations, solve some simple puzzles, fight a huge number of enemies and powerful bosses. There are 36 playable heroes in total, all with a unique fighting style and four different special abilities that are learned as they level up. The heroes selection is quite good, as it includes some of the most recognizable faces of the Marvel universe, like Captain America, Iron Man, Spider-Man, Thor, Wolverine, Deadpool and the Guardians of the Galaxy as well as some of the heroes that have become more popular in recent times thanks to the Netflix-produced shows like Iron Fist and Luke Cage. 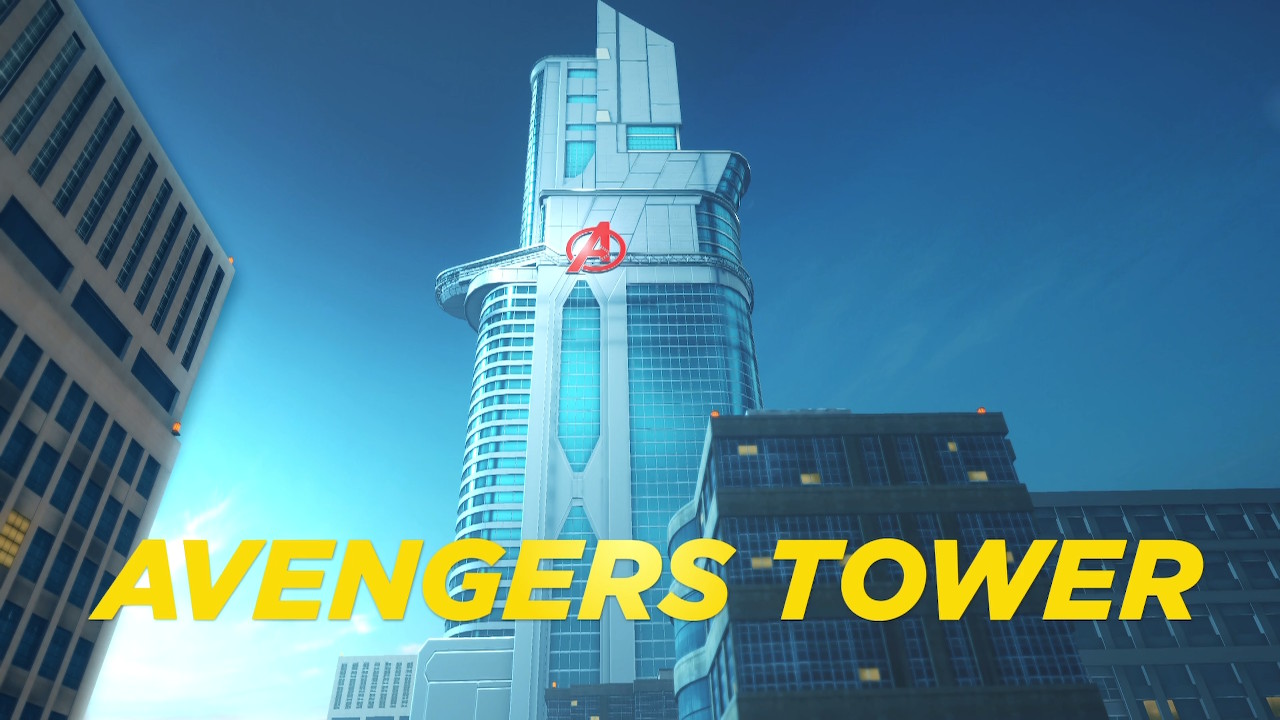 While heroes can be roughly divided into three different categories - agile, heavy and long-range fighters -, they all play quite different from one another, thanks to the improvements made to the series' battle system. For the first time in the series, all heroes can unleash light combo attacks as well as a heavy attack, which can be used effectively as a standalone attack or as a combo finisher. All characters also have an aerial attack which can also work well in conjunction with the other attack types, like Thor's air slam which combos nicely into his light attacks string, or Spider-Man's web-shooting. Attacks can also be canceled into any of the special attacks, including the all-powerful Extreme attacks, making the battle system quite varied and fun. Things do tend to get a bit hectic, favoring some mindless button mashing, but thankfully there are a few mechanics that prevent Marvel Ultimate Alliance 3: The Black Order from being a total button mashing-fest.

The most common enemy type doesn't require much strategy to defeat, but things are tougher with stronger enemies who come with a stagger gauge. As long as that gauge is full, these enemies receive reduced damage and cannot be staggered. Attacking them with heavy attacks and special skills depletes the gauge, and once empty, players have the chance to stun them and deal more damage. Stunning an enemy, however, requires synergy between party members: each of the special attacks comes with a specific property, and executing two special attacks with the same property or with compatible ones, will unleash a more powerful attack that deals additional damage and has the ability to stun enemies. Unfortunately, battles can get so chaotic that button mashing still is a good way to go most of the time.

The most interesting battles of the game are boss fights, obviously, and they are extremely well-crafted. While stunning bosses to deal damage is the primary objective, the way this is done is very diverse. In the very first big boss battle against Sandman, players need to bring him to a solid state so that damage can be appropriately dealt. Another battle sees players bait the boss to attack a specific point on the ground so that a trap is triggered. These add some welcome variation to the regular combat formula and make the fights feel epic as they should be. 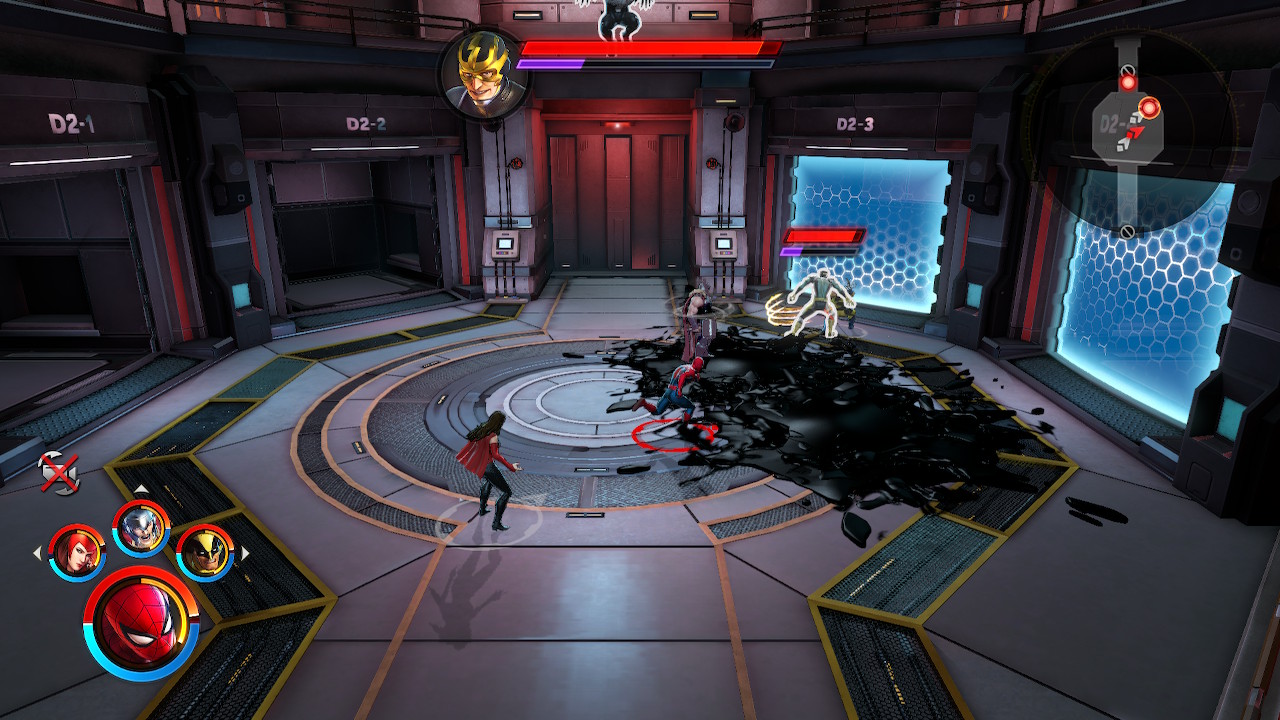 Marvel Ultimate Alliance 3: The Black Order features a renewed focus on RPG mechanics, offering players several ways to improve their heroes. After a certain point in the game, it will be possible to equip and even modify ISO-08 fragments, which grant characters stats bonuses as well as special abilities like healing which are not normally available. Stats can also be increased globally through the Alliance Enhancement system, which features seven different hexagons filled with nodes that can be unlocked with credits and Enhancement Points. Each node increases the basic stats - Vitality, Energy, Strength, Durability, Mastery, and Resilience - as well as the damage dealt to stunned enemies, Extreme gauge acquisition rate and so on.

While combat is undoubtedly the main focus of Marvel Ultimate Alliance 3: The Black Order, developer Team Ninja tried spicing up the experience a little by including some very simple yet fun puzzles as well as incentives for exploring stages. Almost all stages feature not only secret treasure chests (which contain credits, artwork pieces and other forms of additional content) but also Infinity Rifts. These rifts include special challenges granting some very nice rewards such as Experience Orbs, which can be used to gain experience points quickly in the main menu, Ability Orbs, which are required to power up abilities to the third and four rank, ISO-08 fragments, and even additional costumes. The Infinity challenges also get unlocked by proceeding to the game, offering some twists on already completed story scenarios, such as clearing stages with specific characters and cleared boss battles. While these challenges provide additional content, the rewards they offer aren't particularly meaningful outside of the additional costumes. 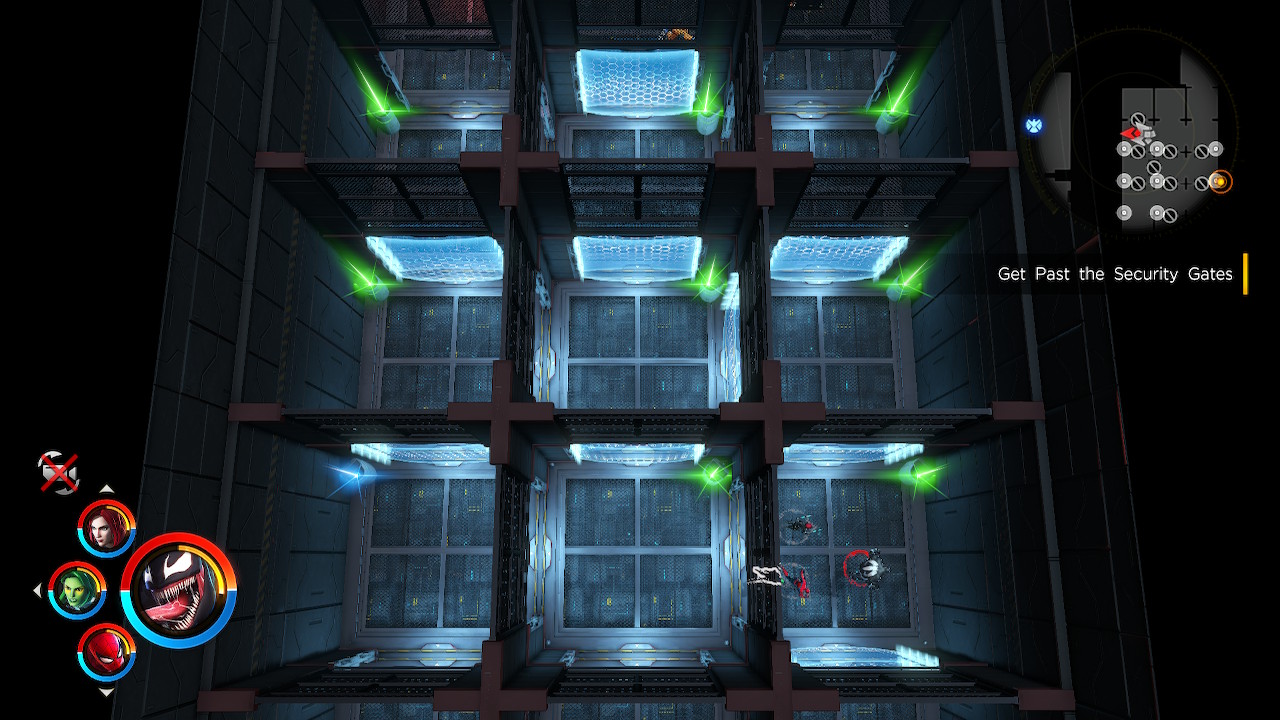 The true saving grace of the Marvel Ultimate Alliance 3: The Black Order is the co-op mode, which definitely alleviates the repetitiveness that eventually sets in. Due to the lack of players in the pre-release stage, I have not been able to try out online co-op, but local co-op works as nicely as expected and it renders the whole experience incredibly more fun than it is in single player.

Marvel Ultimate Alliance 3: The Black Order is far from the best looking game available on Nintendo Switch and comes with a couple of technical issues, like excessively long load times, that damage the experience a bit. Character models are detailed enough while remaining far from the best looking we've seen on the Switch, and stages do manage to represent iconic Marvel locations, despite a general lack of interaction possibilities which makes all corridors look pretty much the same. Everything also has a very jagged look, more in handheld mode than in docked, so playing the game on a bigger screen is much better also due to the chaos that ensues whenever the fighting begins. That's particularly problematic when you try to understand what is going on on a smaller screen. Performance is also very spotty at times and frame rate drops happen very frequently during big battles. Thankfully, drops aren't overly dramatic. The camera is flawed, too, and often fails to provide the best possible view, especially during co-op play. The soundtrack and voice-acting are serviceable but hardly memorable. 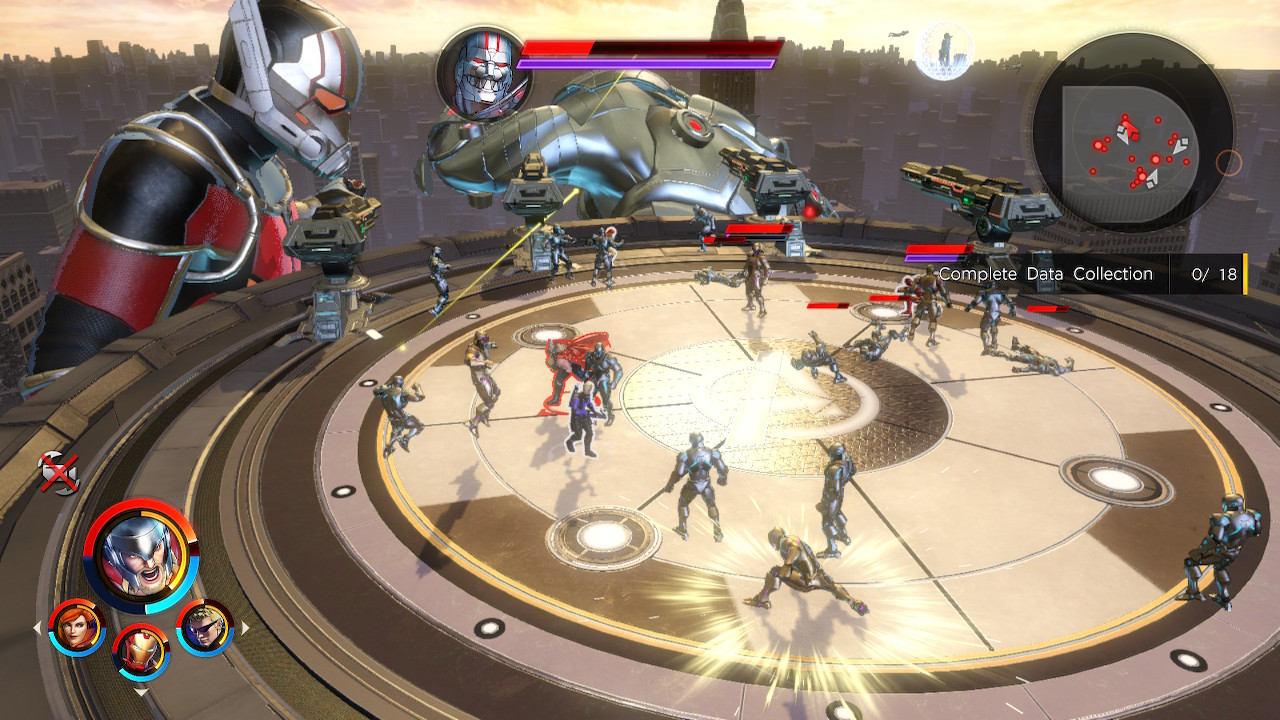 Everything considered Marvel Ultimate Alliance 3: The Black Order is a competent hack and slash game and definitely the best entry in the series. The huge and varied character roster, combat system enhancements and good amount of story and optional content are its highlights. Sadly, the game gets repetitive after a while, and only co-op manages to extend its life a bit as there's little to no incentive for multiple playthroughs. Some technical issues also get in the way at times, so only the most die-hard Marvel fans will feel like coming back to it after completing the story campaign.

Marvel Ultimate Alliance 3: The Black Order is a dream come true for any Marvel fan thanks to the huge character roster and the serviceable story involving the Infinity Stones. Sadly, the game may not be all that appealing to those who are not particularly invested in the Marvel universe, as the combat and RPG mechanics, while solid, lack depth. Marvel Ultimate Alliance 3: The Black Order gets quite repetitive after a while and the lack of content variety also means that even co-op will eventually feel old. A solid effort, for sure, but far from one of the best Nintendo Switch exclusives.