The Dark Pictures: Man of Medan

Until Dawn is one of the best horror titles of this generation. Sure, the game goes a bit heavy on the slasher movie cheese, but that’s easily pardoned given its intense set pieces, impressive visuals, and deep “butterfly effect” branching story system. Sadly, Until Dawn has yet to receive a proper sequel since its 2015 release -- only a couple of gimmicky VR spinoffs. This fact clearly frustrates developer Supermassive Games as much as the fans, as the studio’s broken away from Sony’s cozy embrace to launch The Dark Pictures Anthology with new partner Bandai Namco.

The first entry in this proposed series of quick shot horror games is Man of Medan, which aims to replicate that Until Dawn magic, but can that be done without a big Sony first-party budget? Or should Until Dawn fans put their hopes of a fitting follow-up to bed? Grab your flashlight, it’s time to find out…

Man of Medan sticks to the classic slasher movie tropes, with a gaggle of sexy co-eds hitting the high seas for some drunken debauchery and a little light treasure hunting. Pretty much all the standard horror movie character classes are represented – we have leading-man Alex, his nerdy brother Brad, uptight WASPy Julia, her horndog bro Conrad, and the ship’s unflappable captain Fliss. Everybody’s model pretty, frequently half-naked, and constantly cracking terrible jokes, but hey, Supermassive’s lack of shame is part of their charm. Overall, Man of Medan offers up a more likable cast than Until Dawn, which sometimes felt like it was tempting you to kill off its characters.

Our heroes are on a search for a legendary lost WWII vessel, the SS Ourang Medan, but their booze-soaked expedition hits choppy waters when they’re boarded by a band of pirates who are very interested in the “Manchurian gold” said to be on the wreck. Surprisingly enough, the lost vessel is actually located, but once our group and the pirates climb aboard, they find they’re not alone. The ship is packed with skeletons and everyone starts seeing ghosts and other horrifying visions, but is everything what it seems? I won’t ruin the game’s secrets, but I can assure you the game serves up a fun yarn with a few good twists.

Man of Medan’s solid story is bolstered by some fairly impressive visuals. Much like Until Dawn, this game boasts some fantastic, expressive facial animations, and environments are well-lit and appropriately moody. The game’s voice actors, including Shawn Ashmore (X-Men, The Following) and a host of seasoned TV veterans, chew through their goofy dialogue as best they can. Unfortunately, the game is beset with some fairly serious stuttering during story scenes, likely caused by some sort of loading issue. In a few cases, it almost feels like bits and pieces of scenes are outright missing. These performance problems rarely effect gameplay, but they can be distracting, so hopefully Supermassive will be able to deal with them post-launch.

As mentioned, Man of Medan doesn’t stray far from the blueprint laid down by Until Dawn. The game serves up a succession of conversations and quick-time-event-laden action scenes, during which you’ll have to make a number of hasty decisions; some life-or-death, some seemingly trivial. Often, “minor” choices will actually have the biggest effect on your story. It’s fun to see the gory results of your panicked decisions play out, but Man of Medan’s focus on player choice doesn’t necessarily mesh well with the game’s button-mashing action scenes. Keeping a character alive almost the entire game through careful decision making only to have them die because you accidentally pushed the square button instead of the circle button is more than a little irritating. That said, there’s no denying the effectiveness of some of Man of Medan’s sequences – your first encounter with the pirates and a late-game chase scene with a particularly ghastly figure are downright gripping. Supermassive clearly have a knack for cinematic tension, I just wish their action scenes were a little more skill-based.

Man of Medan also doesn’t do a great job of tracking your decisions, particularly compared to Until Dawn. Supermassive’s earlier game always made the results of your choices very clear, making it easy to intuit what you needed to do to change your fate. Man of Medan tries to do something similar, with a “Bearings” menu that records all your key decisions, but it often isn’t clear exactly why choice A led to result B. In between the decision-making stuff is some light exploration featuring fixed Resident-Evil-style camera angles. The game does a decent job of guiding the players through these bits, but they don’t offer a lot of tension, as you quickly realize nothing will really threaten you as you wander around. The goal of these sections is to find secrets, which will reveal more of the game’s backstory, but again, the menu that tracks which secrets you’ve found is needlessly complex compared to Until Dawn. It almost feels like Supermassive intentionally made figuring out Man of Medan’s story more confusing than it needed to be in order to encourage multiple playthroughs.

Why would they do something like that? Well, Man of Medan is a short game. My first run through only took around five hours, and that included lots of exploration. Focused players could probably blitz to the end in three or four hours. Granted, the game is meant to be replayed, but I wasn’t as excited to jump back in as I expected. My first time through I managed to keep all five main characters alive, but many of the game’s mysteries remained unsolved, and I wasn’t sure how to change that. I did play through the game again, finding a few more answers along the way, but some questions remain. I’m not sure if I’ll be embarking on a third playthrough any time soon.

Maybe you’ll be more eager to replay the game if you find the right folks to play with. Man of Medan adds two multiplayer modes to the mix – Movie Night is a fairly simple pass-the-controller sort of thing, while the more interesting Shared Story mode lets two people play online simultaneously. Multiplayer is a welcome touch, but it isn’t transformative, and it’s hard to shake the feeling Man of Medan is stretching its campfire story just a little thin.

This review was based on a PS4 copy of Man of Medan provided by publisher Bandai Namco. 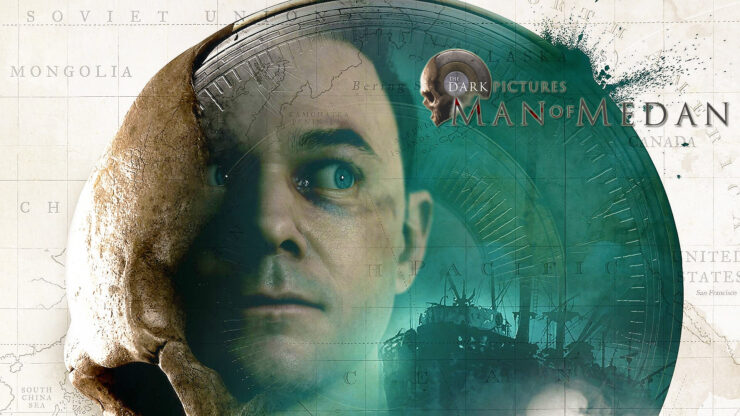 Armored Core VI Fires of Rubicon is FromSoftware’s Next Big Project, Coming in 2023 The Dark Pictures Anthology: The Devil in Me Preview – Halloween is Here