In the first ten minutes of Lost Ember, an indie game funded on Kickstarter three years ago, you are treated to a small floating orb and a wolf. As the wolf, you explore a dank cave as the game hints at some wider, spiritual journey to come. It's perfectly alright. The art style is nice enough, the sound design is pleasant, the story is interesting. But nothing quite hooks you in.

Until you escape the cave. In the very first valley, you get to leave behind the overabundance of grey and tight corridors, to be introduced to a large explorable area, a beautiful palette of colours and some fantastic level design. The sightlines in each valley draw your eyes to the painstakingly well-crafted landmarks that the area revolves around. These can be anything from simple trees on a hill that catch the light just right, or silent and sombre ruins nestled into the shadows of a hillside.

Your floating orb friend will continue to try and characterise himself, a spirit unable to ascend to heaven, but the landscape immediately becomes by far the most interesting character in the game. It evolves as you explore, beginning in luscious valleys and changing into terraced hills and old townships as you move further from the dank cave you began in. But this doesn’t detract from the story though, as a large part of the game revolves around the wolf learning about the old inhabitants of the world, and you can get a lot from the ruins left behind, as well as the fragments of memories you’ll find inside them.

The gameplay reflects the gorgeous environments and thoughtful story, too. There is no time limit and therefore no rush to your adventure, no great evil you have to defeat or town you have to save. Instead, you can take as much time as you want to wander through the world. Despite the long claws and sharp teeth your wolf is equipped with, there are no real dangers to face in Lost Ember, or enemies to fight. This is an entirely peaceful experience that wants the players to connect to the character and world, not dash through it and destroy everything you come across.

But there are obstacles to overcome, and this means that you’ll have to swap out of your wolf form. Dozens of animals roam the valleys you’ll travel through and the wolf can possess them if she needs to. These can roll through small holes as lemmings, dig under ruins as moles or fly over the cliffs as birds, and more. Each animal has its own unique ability that helps you not only progress through the game, but see each area in different ways. As a wolf, your route through the world is fairly obvious, but once you find new animals to connect with, you’ll spot new avenues and areas to explore down.

That being said, the flight mechanics are a bit awkward for most birds and it doesn’t work as you would imagine. Most birds can only go so high above your starting point and will quickly lose altitude which probably means you’ll miss a few ledges as you get used to the strange controls, but there’s no punishment for death, so it's not much of a worry.

This does mean you can really experiment and explore though, without having to worry about being sent back to the start. And there are plenty of collectibles to reward you for combing through the whole map. There are loads of mushrooms and relics to find, legendary animals to meet. There are even some hidden minigames as well, like a strange version of Flappy Bird. The sheer beauty of the scenery will often get you to stop and just look around for a moment as you take in the new valley you’ve wandered into, and this also provides the time to spy out any glinting relics on the horizon.

The music does a fantastic job of settling you into the world. Although sometimes it does seem to leave you with nothing but the sounds of the wolf padding through the glades, which can be a little too quiet. But when it is around it matches the pace of the game wonderfully, complimenting the visuals without making the player feel too rushed or sluggish.

Given the absence of combat, Lost Ember might not appeal to everyone. But its focus on the exploration of a beautiful, perfectly designed series of valleys is not one that can be so easily overlooked. There is a growing library of games that focus on this kind of interesting, introspective adventure, and Lost Ember is surely a highlight amongst them.

Reviewed on PC (code provided by the developer). You can get the game on Steam. 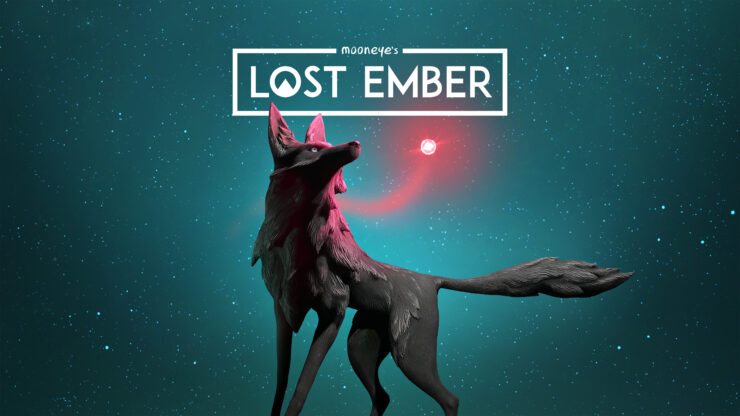 Lost Ember is a game that wants you to take your time and take in the beauty around you, and it absolutely nails these goals. The entire design of the game is used perfectly to awe-inspire the player and give them the chance to explore at their own pace.