Developer Game Freak is primarily known for creating the Pokemon franchise, but they also like to take advantage of their independent status (contrary to popular belief, they are not owned outright by Nintendo) by releasing various quirky side projects. Games like Pocket Card Jockey, Giga Wrecker, and Tembo the Badass Elephant aren’t nearly as successful as the exploits of Pikachu and pals, but they all have their followings, and developing these weird experiments undoubtedly helps the folks at Game Freak stay sane. Game Freak’s latest side thing is Little Town Hero, an adventure that takes place entirely in your standard humble village so many JRPGs start off in.

So, is Game Freak’s latest destined to become another under-the-radar cult hit? Or will you want to pack up for the big city after playing Little Town Hero? Let’s find out… 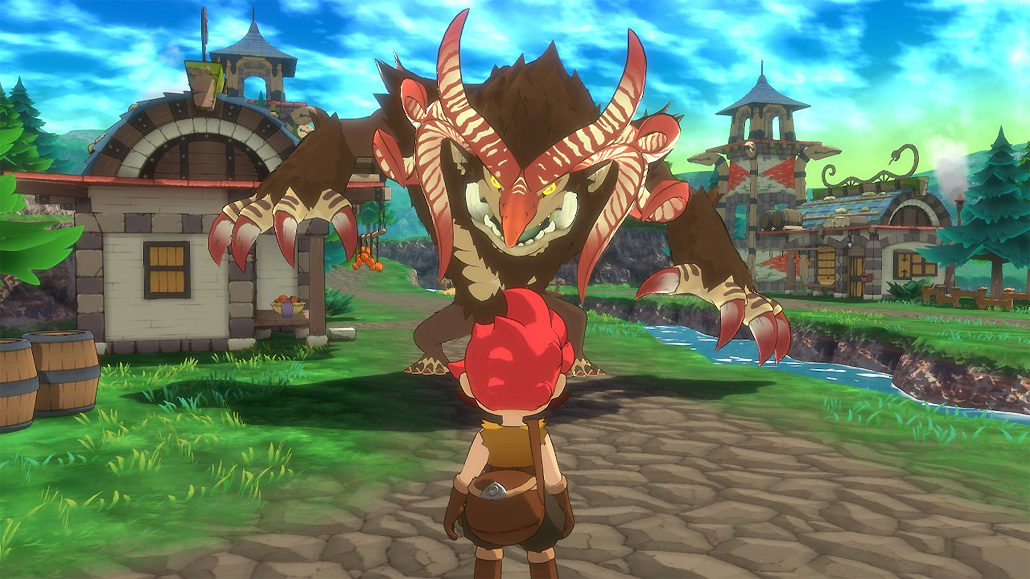 Little Town Hero casts players as Axe (or whatever you choose to rename him), who’s pretty much your prototypical Game Freak protagonist, which is to say, a headstrong doofus with a slightly overbearing mom and a mysteriously absent father. Axe wants to get out of his little town and see the world and figures becoming a soldier is the easiest way to do that, so he begins training with the drunken knight Angard. The training proceeds quickly as Axe happens to stumble upon a magical red crystal, which grants him powerful abilities. This all comes in handy when giant monsters start appearing in the previously peaceful town. It’s up to Axe to fight off the beasties and figure out who or what might be creating them.

As with most Game Freak titles, Little Town Hero has a fairly simple and predictable story, but isn’t without its charms. Most of the game’s characters are likeable, and it’s interesting to see Game Freak break free of their usual E-rated box (this game is rated T and features drinking, smoking, and some surprisingly freaky monster designs). That said, the story can get a bit repetitive – carrying on a Pokemon tradition, Axe has a rival in the game, who you end up fighting at least seven or eight times before the game is over. Your rival isn’t a terrible character, but the way they use him is overkill. 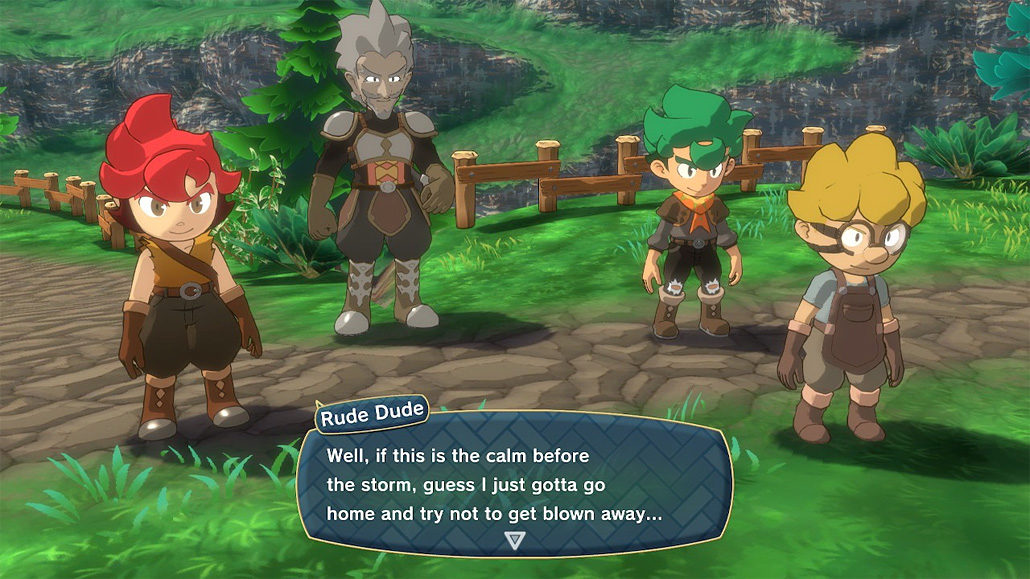 As with the story, there just isn’t that much going on in Little Town Hero’s titular village. This isn’t Harvest Moon or Stardew Valley. The town is small, not terribly interactive, and only a few of its residents are unique, with most being copy-and-pasted clones. There are sidequests you can take on, but most of these are of the very simple “run around town and talk to random people” variety. There’s no money in the game, so there’s no buying new clothes, sprucing up your house, ect. Really, there’s very little character building in general. Little Town Hero only barely qualifies as an RPG, as there’s no leveling up, gear, or anything like that in the game. There is a skill tree you can gradually unlock with “Eureka Points” you gain from battles, but that’s as deep as it goes.

At least our quaint village looks nice. Little Town Hero is no technical wonder, but it has a nice, crisp, cell-shaded look that really shows off the work of Game Freak’s fantastic character and monster designers. There is some odd stuttering here and there, but framerate doesn’t matter that much in a turn-based game like this. The attractive visuals are accompanied by a low-key, yet pleasant soundtrack composed by Undertale creator Toby Fox. 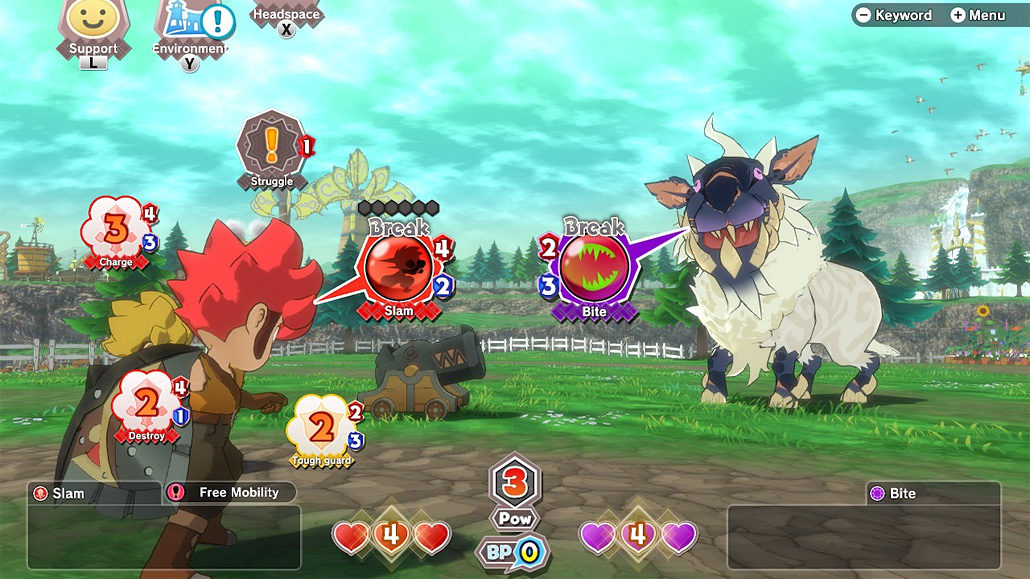 Ultimately, the real core of Little Town Hero are its battles. The game’s trailers and PR have touted a system where you “fight with ideas,” but that makes the game sound a bit more creative and abstract than it is. Your “ideas” are just standard RPG commands (Charge, Slam, Guard, ect.) and you pull from largely the same pool of ideas every battle. The whole fighting with ideas thing is just a fancy way of saying “this is a card-based RPG.” Every turn you and your opponent are dealt a random selection of ideas/cards, or “Izzits” as the game calls them. There are three different kinds of Izzits -- red (attack), yellow (defense), and blue (specials) -- and all red and yellow Izzits also have set values for attack and defense. If the attack stats for your card is higher than the defensive stats of your opponent’s card, you can break that card. The goal for each round is to break all your enemy’s cards, triggering a “Chance Turn” where you can inflict a chunk of damage on them.

That may sound simple enough, but there are complicating factors. You can’t immediately deploy all the cards in your hand – you have to spend action points to convert “Izzits” to “Dazzits” (this game’s names for things are sometimes a tad silly) before you can use them. The number of action points you can spend each turn is limited, so you have to carefully choose which cards you want to activate. Furthermore, each color of card is governed by different rules – yellow cards can be used multiple times as long as their defense points hold out, while red cards can only be used once per turn. Only red cards can be used to inflict damage once you trigger a Chance Turn, so each round you need to break all your opponent’s cards and keep at least one red card in reserve. This isn’t an easy task, and a large percentage of turns will end with you falling juuuust short of being able to damage the enemy. 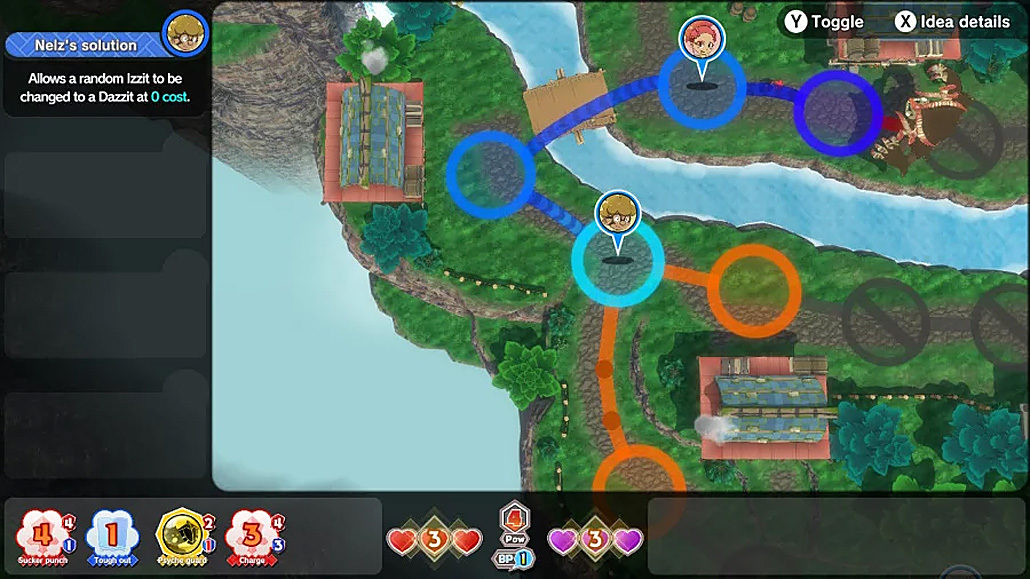 Thankfully, there are some strategies that can turn the tide in your favor. Dazzits will remain activated into subsequent turns as long as they’re not consumed or broken, so you can leave some unused, perhaps even intentionally taking some damage, if you think they’ll be of more use in the future. Between turns, you’ll also roll a die and move around a Mario-Party-esque map representing various points in the town. Some spaces contain support characters, who can be called upon to unleash powerful abilities than can turn the tide of battle. There’s a lot of to keep track of in this game, and if you’re not thinking a couple steps ahead, you will taste your share of defeat.

Little Town Hero’s battle system is certainly unique, almost feeling like a table-top board game at times, and like a lot of board games, the action unfolds at a rather leisurely pace. Bosses can drag on for as long as an hour as turn after turn ends in stalemate. These epic showdowns can be absorbing and ultimately satisfying when you pull off a victory, but it’s more than a little frustrating to sink 45 minutes or more into a battle only to fall short. Protip – if a fight doesn’t seem to be going your way, don’t be afraid to quit. Game Freak is clearly well-aware of how badly battles can drag on, because you still get Eureka Points if you lose or quit, so your time is never totally wasted. As with any card-based game, there’s a degree of randomness at play in Little Town Hero, so if you haven’t inflicted any damage on a boss within 10 or 15 minutes, just peace out and start again. Hopefully you’ll get a better mix of cards on your next try. 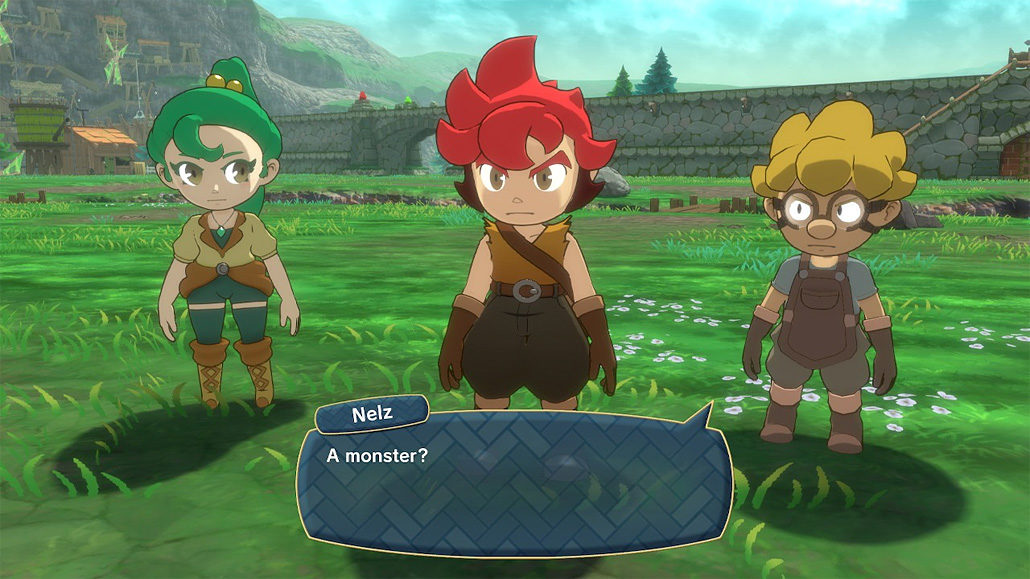 As you may have picked up on, I’m a bit split on Little Town Hero. The game’s issues are hard to overlook, and yet, I still happily gobbled up the game’s 10-to-12-hour story in only a couple days. For all the game’s shortcomings, I still found it strangely compelling, although I realize I might be an outlier. For many, if not the majority, or players, a little of this game will likely go a long way.

This review was based on a copy of Little Town Hero provided by publisher Game Freak.

Your enjoyment of Little Town Hero will largely depend on your patience for quirky JRPG systems. The game’s battle mechanics are unique and surprisingly deep, but can be frustratingly random and time consuming. Add in a story and world that have their charms, but are ultimately rather simplistic, and you have a Little Town that will only appeal to select tourists.