Ever wondered whether expensive ultra-short throw laser projectors (the LG HU85LA 4K UST in this case) are actually worth the price tag? While there are tons of reviews of brand new devices (you can check out our original review of the LG HU85LA here) there are almost no reviews after "burn-in" time for a projector has passed. This is usually where most DLP and non-laser light source projectors will start to show something called lamp fade. Good quality projectors boast color accuracy even after lamp fade but could you have a projector that shows no lamp fade during its life?

This is why we wanted to do a special review after burning in LG's HU85LA 4K Ultra Short Throw (UST) Laser projector for 6 months and seeing just how it compares to the specs on paper. As far as we know, this is the only 6-month review of the LG HU85LA 4K UST and should let you know if it is *really* worth the investment.

Using the LG HU85LA 4K UST projector for 6 months: how does it hold up?

The LG HU85LA 4K UST projector is a living room projector (with full cinema projector capabilities) that boasts the highest lumen count we have ever tested and is ideal for scenarios where setting up a long throw projector would be difficult or not practical. While most DLP projectors (the vast majority of projectors in the mainstream segment) have a light source that lasts at most 5000 hours, LG is using a laser light source that will last for at least 20,000 hours.

Not only that but while other vendors use a single laser source passing through a color wheel, LG instead relies on a triple-channel laser system (which counterintuitively only houses two lasers - a blue and a red one) for this particular projector. The biggest promise of this projector, however, is the fact that it can be used as a living room projector. When coupled with an ambient light rejecting (ALR) screen, and its high lumen count, you would have a TV-like experience at up to 120 inch. Considering the fact that the light source is laser-based you should also see no lamp fade and the device should outlive any use you have for it. Or at least that is what the manufacturer claims and this is what this review aims to find out.

The LG HU85LA 4K UST uses a Texas instruments 4x XPR chip to achieve true 4k resolution (at a maximum of 30 fps). A note here about XPR: unlike 4K enhanced projectors, an XPR projector does actually project a true 4k grid on a screen. It achieves this by projecting all of the pixels in rapid succession (kind of like a CRT TV) and continuity of image in your brain makes it appear as a cohesive image instead of four different parts. It works sort of like how CRTs of old used to work (with progressive lines being scanned on the monitor and your brain making them into a single image).

The company has rated the projector at a peak brightness of 2700 ANSI lumens and a contrast ratio of 2,000,000 to 1. HDR10 with Dynamic Tone Mapping is supported and the min-max screen sizes are 90 inch to 120 inch. It is worth noting here that this is a "smart" projector and contains Google Assistant, LG's native app drawer, and more. It features a DTV tuner, Bluetooth, and a USB connection that should be able to play most video files. Furthermore, it comes equipped with a somewhat lacking 5W + 5W dual speaker system. Although if you are putting this much into a projector, chances are you will have a dedicated audio system anyways.

Our testing methodology was fairly simple. We ran test patterns on the projector for an average of 5 hours each day (sometimes as long as 10 hours) for 6 months. This is what we would consider extremely heavy use (amounting to 35 hours per week of viewing time) and generally higher than what most users would do. This is a total of roughly 900 hours of use over the course of 6 months. To put this into perspective most DLP projectors start to show lamp fade by the 250-hour mark. Good DLP projectors don't show it till 500 hours.

All DLP projectors would have shown lamp fade by 900 hours. Projector companies usually use extensive color science to account for the lamp fade and adjust the colors accordingly so the only thing you see is lowered brightness. LG's projector, however, should show very little lamp fade during this time and while DLP projectors usually last 3500 hours on average, this one is supposed to last 25000 hours. At an average of 1800 hours per year, which is very heavy use, this should theoretically last up to 13.9 years!

We tested the projector at a screen size of 110 inches and measured the different color channels and compared them to our initial recordings. If there is any lamp fade that is not visible to the human eye, our sensitive lux meters would be sure to catch it. The white, red, green, and blue channels were tested using pure test color patterns. Since this is a UST projector, recordings were taken at a 45-degree angle to coincide with the light rays.

The results surprised us. We saw zero fade across all the different color channels and actually saw slightly more lumens than our last recording (although that is within noise and does not mean anything). This is something we had already expected considering the technology inside but seeing it first hand is very impressive. Unlike DLP lamps, which fade in an analog fashion, you can think of lasers as more digital in nature. When they are working, they will likely work at full power. It also means that I can safely say this projector will last a very very long time and will not require any lamp replacement as DLPs do. You are likely going to replace this device well before the laser runs out of juice.

If you want the full deets on the color reproduction and picture quality, read our full review of the LG HU85LA over here.

I am not a very heavy tv user. While the projector mostly ran test patterns during this time, I also shifted much of our Netflix-ing and casual watching to the LGHU85LA to get a first hand feel for it. I would estimate I spent at least 400 hours out of the 900 hours actually watching content on it. The magic remote is very easy to use and the intelligent light-on feature is very handy when you are fumbling around in the dark.

The speakers are just as good as any TV (probably better) and can be tuned to a small degree, although I would still advise using a dedicated soundbar with a subwoofer with this projector. Probably the only caveat associated with the use of this projector is that setting it up is pretty hard. At 110 inch (which is the largest size I would recommend considering the edges start to lose focus after that point), you would need an extremely flat screen to get a rectangular picture. Pairing this with a motorized standing ALR screen would be much better as that automatically applies tension to the surface.

The content experience on the other hand was absolutely flawless. HDR works great on the projector thanks to its high brightness (most computer monitors can't even cross 400 lumens let alone 800 like this projector) although calibrating the image does sacrifice some of this impressive lumen count. The input lag is not really noticeable to me and the projector has a very extensive software menu for calibration. Netflix and Prime video are available out of the box although you will have to sign up with LG for that and are just a click away on the remote. The wifi receiver is a bit weak so you would want to have an access point nearby or unobstructed line of sight at the very least.

All in all, I am very impressed with the LGHU85LA. I have dabbled in projects for a very long time and not having to worry about lamp fade is a great feeling. Normally I would be worried about watching something for 10 hours on end on a DLP projector but this is not an issue with the LG UST.  The colors are maddeningly vivid and should please everyone from cinephiles to casual watchers that just want to watch sports. And of course, the fact that is a UST projector means you do not need to set anything up on the roof or floor and it makes for a brilliant conversation piece as well. This is one projector that will add to your decor.

So what is the value proposition here? At over $5.5 grand, this is a very steep price tag so what exactly is LG's target market?

The projector already has enough lumens to use in an ambient light setting (which most projectors cannot do) and coupling it with an ultra-short throw ambient light reflecting screen (UST-ALR) would amplify the punch massively and make this the perfect living room companion. Note: ALR screens and UST-ALR screens are completely different! While we do have UST projectors on the market

If you start from the TV market, you will see that a 100 inch 4K TV will usually set you back $8000. A 120 inch TV will set you back $11000. The LG HU85LA coupled with a 100-inch UST-ALR screen (which costs around $800) will set you back $6300. This is a direct saving of $1700. You can also go for a motorized UST ALR screen that pops up from the floor to have a living room entertainment system that completely vanishes after you are done using it and is STILL cheaper than a 120inch TV. The price of the projector is also fair, considering its dual-laser system and exceptional brightness. To put this into perspective, Sony's laser 4k UST projectors cost upwards of $20,000.

There are some slightly cheaper 4K UST projectors that compromise a bit on the color accuracy and shave $500 off the price (the Optoma CinemaX Pro for eg) but we think the ratio of color accuracy and brightness that LG has gone with is in the sweet spot to use with an ALR screen (and absolutely perfect for a darkroom).

With a product this expensive, we understand that it is not for everyone (unless you have $5500 burning a hole in your pocket) but if you are on the market for a TV that is larger than 100 inches than the LG HU85LA is a very good option for you to consider. It is a much cheaper alternative to a TV that large and is easier to setup. It features vivid modes (for TV fans) and pre-calibrated expert modes for the cinephiles that want a true-to-film experience.

If you have a budget in this range, then the LG HU85LA offers incredible value, allowing you to save upwards of $1500 on setting up a viewing experience this large. If you can get over the one-time hassle of finding a flat surface with enough tension then you will love what this projector has to offer. This is almost certainly an investment and not an impulse buy but it is one that will last you for well over a decade. 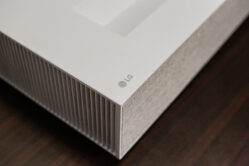 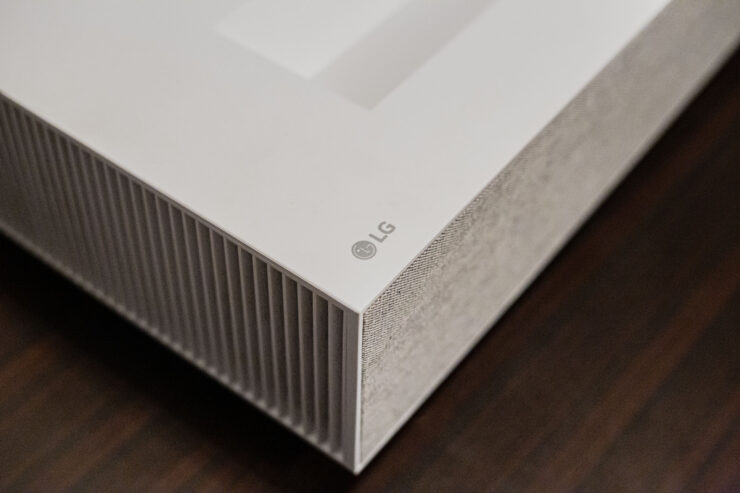 We revisit the LG HU85LA 4K UST Laser projector after 6 months of heavy burn-in (cand casual use) and found absolutely no fade off (a trait that is common in DLP projectors). The exceptionally vivid colors are certainly going to last for as long as you want them too (our conservative estimate puts it at 20 years with regular use).