Legrand Legacy: Tale of the Fatebounds Review – Diving Deep Into The Past

JRPGs have been around for quite some time, but their golden era came a few years after the first few games of the genre got released. While many considering the SNES era as the golden era for JRPGs, with games like Final Fantasy IV and VI, Secret of Mana, Chrono Trigger and so on, there are others who see the PS1 era as the best one for JRPGs. The latter has been a great influence on Legrand Legacy: Tale of the Fatebounds, a new title developed by SEMISOFT (and funded on Kickstarter) to properly give homage to JRPGs released between the mid-90s and the early 2000s. This is, in truth, the game's greatest achievement and greatest flaw at the same time, depending on how the player sees the lack of true innovation.

Legrand Legacy stars an amnesiac young man named Finn, a slave who is forced to fight inside the arena found in the town of Juble. Following an intense match where Finn emerges victorious, his freedom is bought by a mysterious old man who asks Finn to accompany him in a dangerous area. Little does Finn know that his journey will bring to discover his nature of Fatebound and his destiny as the world's savior. 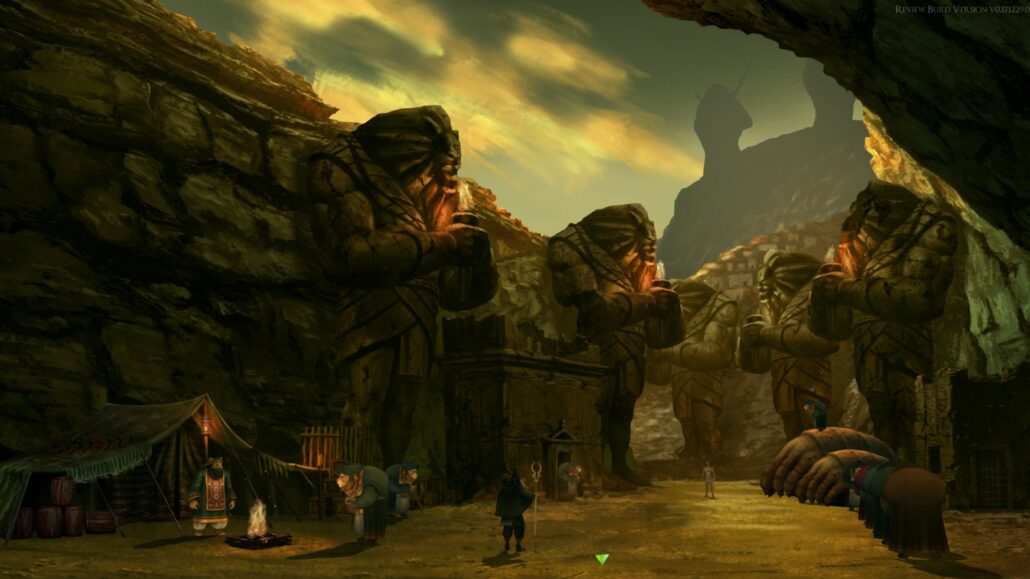 Legrand Legacy has all the tropes that fans of the genre have seen in the latest fifteen to twenty years: amnesiac main character, tomboy heroine, a mysterious old man with strange powers, a great war between nations, otherworldy powers aiming to destroy the world and so on. Despite this, both story and characters manage to be enjoyable, but mostly as a tribute to older games since they are not terribly original, as already mentioned. Special mention has to go to the world, which is quite well crafted: all of the locations, while generally having a very somber atmosphere, have a distinct feel to it, which is heightened by the impressive hand-drawn backgrounds.

Legrand Legacy's homage to PS1 era JRPGs doesn't stop a story and characters, as the game plays like one released shortly after Final Fantasy VII. Players control Finn as he explores towns and dungeons, all coming with static camera angles and visible enemies. Touching an enemy from behind allows players to initiate combat with a sound advantage while getting touched from behind an enemy will allow them to attack party members at the start of the battle. Completing the homage are treasure chests scattered all over the locations and secret exits which can lead to the discovery of rare items and more.

Legrand Legacy employs a turn-based battle system with some interesting tactical and action elements which make it quite involving. At the start of each turn, players can choose to perform a regular attack with the equipped weapon, use items, defend and unleash skills which are called Grimoires. With the exception of using items, all actions, when performed, bring up a circle with a highlighted area: if the player manages to hit the shown button at the right time, the action will be more effective. Pressing the wrong button will decrease both strength and accuracy of the regular attack or Grimoire, or make the defensive action way less effective. 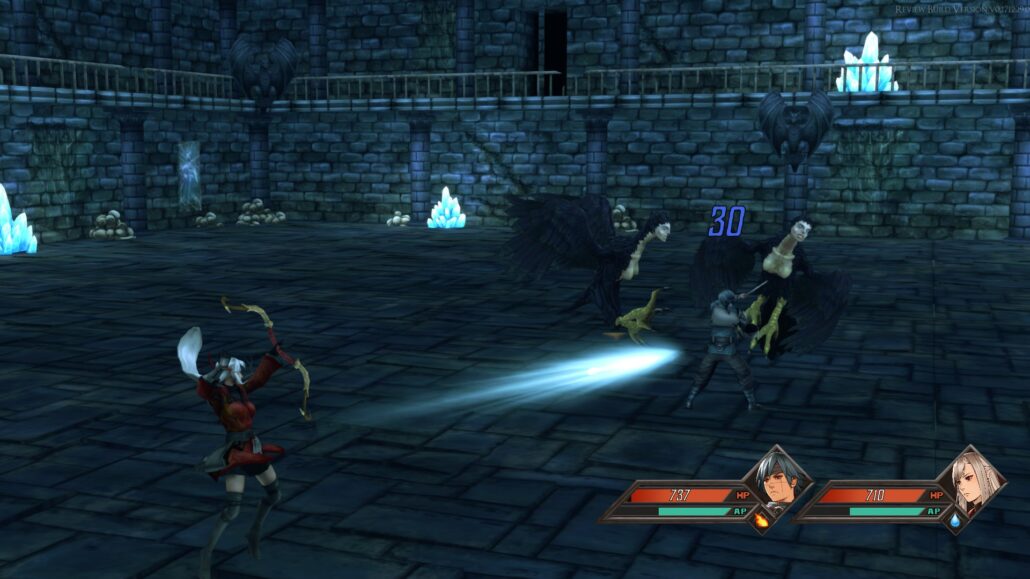 Alongside these small action elements, the Legrand Legacy battle system also comes with plenty of tactical ones. Even before battles begin, players have to decide the party formation: characters in the front can only attack enemies in the front if they have a short range weapon, while those in the back can only attack with long-range weapons or Grimoires. The formation can be changed during battle, allowing players to adapt to the situation. Additionally, all enemies come with resistances and weaknesses, adding yet another tactical element to the battle system. All these action and tactical elements mesh quite well, so it doesn't take too long to get acquainted with the battle system intricacies.

The growth system is also quite interesting, even though it's not something we haven't seen before. Upon level up, characters receive an HP and AP increase as well as ATPs that can be spent to increase stats. Increasing stats to certain points also unlocks Grimoires, opening up some interesting customization possibilities: while Finn, to make an example, is mostly a short range, powerful fighter, players can choose to make him more balanced by allowing him to learn a variety of supportive Grimoires, which are learned by improving stats other than strength. Leveling up and learning Grimoires aren't the only way to make characters stronger in the game, as a crafting system also allows players to craft weapons that are not available in regular shops.

Adding more variety of the experience are also some true tactical battles, which have definitely been influenced by another great JRPG series which started on the original PlayStation, Suikoden. During the course of the game, players will get involved in some tactical battles, moving units on a battlefield and fight enemies. There are a different set of mechanics behind these battles, adding more variety to the experience.

Most of the JRPGs from the PS1 era came with a lot of mini-games, and, being a homage to them, Legrand Legacy features plenty of them, ranging from some fighting mini-games to fishing and so on. They are not particularly difficult to complete, so they are a welcome change of pace. The game also features a town-building mini-game where players recruit craftsmen to rebuild the abandoned city of Dumville. Not terribly original, but definitely a welcome diversion. 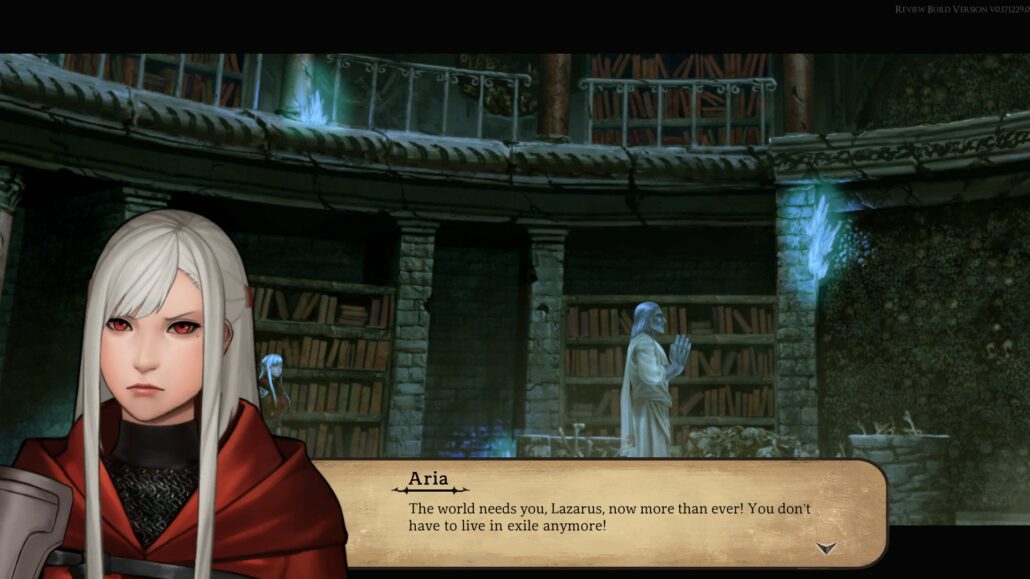 If there's an area where Legrand Legacy truly shines and manages to be fairly original as well, is in its presentation. As already mentioned, the hand-drawn backgrounds are very beautiful, enhancing the unique atmosphere of the game's world. Characters and enemies also evoke the feel of the PS1 era: models are far from being the best we have seen, but they do their job decent and mesh well with the beautiful backgrounds. The soundtrack is also quite well done, with select town themes being standouts.

Legrand Legacy: Tale of the Fatebounds is a difficult game to score properly. While the game is definitely enjoyable, there isn't anything new that hasn't been done by other games in the past fifteen years. For this reason, those looking for something new may be disappointed in Legrand Legacy, as the game doesn't go past tributing the golden era of JRPGs.

Legrand Legacy: Tale of the Fatebounds is an enjoyable JRPG which brings back features that are difficult to find in modern games, such as a turn-based combat system enriched by action and tactical elements, mini-games and more. Sadly, SEMISOFT didn't bring anything truly new to the table and, as such, fails in being more than just a well-crafted tribute to the golden era of JRPGs.