For the first time in the series, a Mana doesn't begin and end with a Sword of Mana leading to the Mana Tree's eventual destruction. That should perhaps be the first sign that Legend of Mana might be something completely different from the norm. With the SaGa creator taking top bill on the fourth Seiken Densetsu story, players should get ready for a Mana unlike any other. Now nearly two decades after its initial release and a fresh set of backdrops, is Legend of Mana worth replaying and getting that catchy theme song stuck into your head all over again? 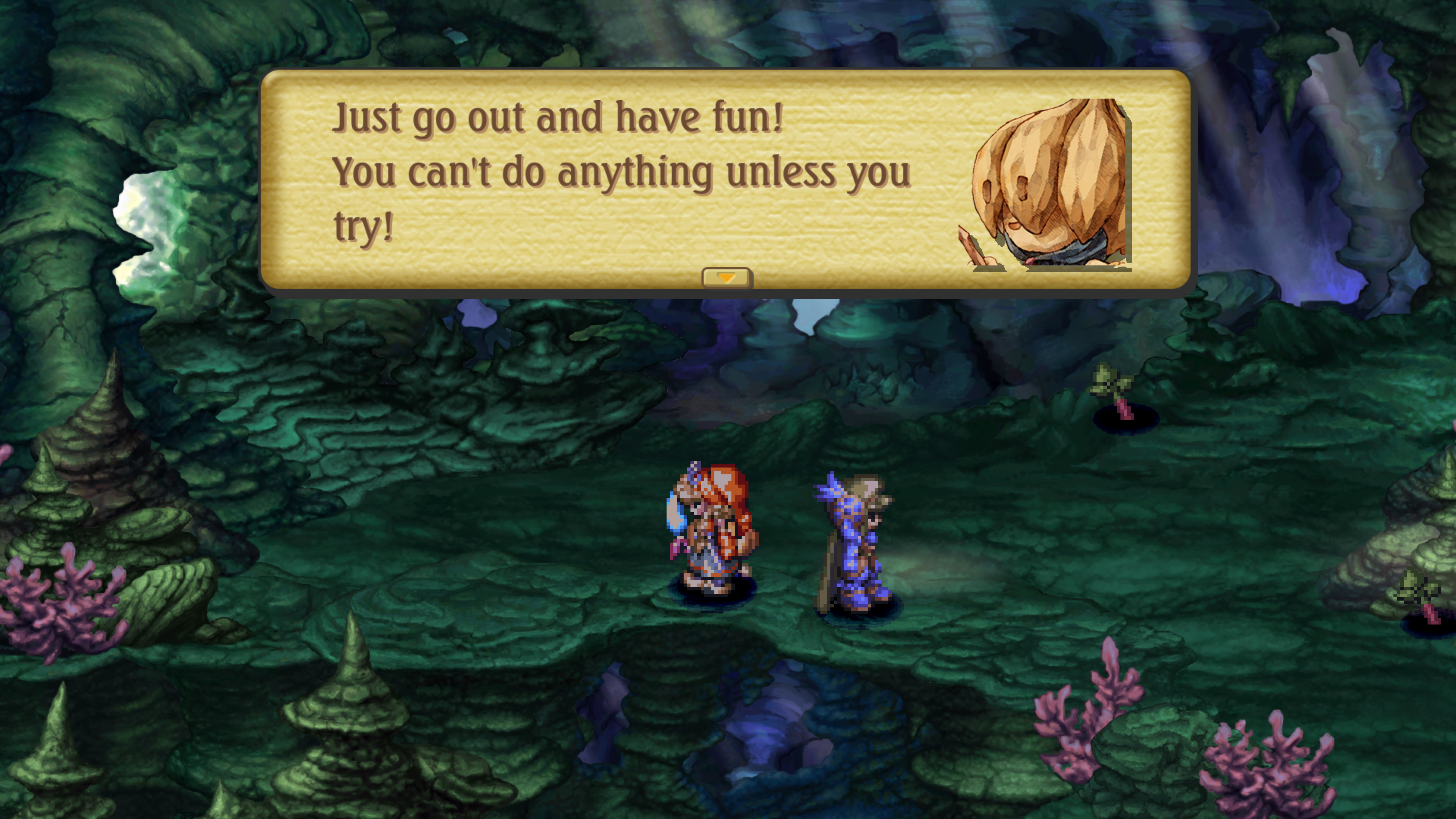 Legend of Mana begins much differently from any other title in the series or even other RPGs in general. After sitting through the opening movie and opting for a fresh game, the player is given only the briefest of hints as to what to do: pick a gender, a name, and a preferred weapon to begin. After that, you're brought to the world map and told to select a region in the world to begin your grand adventure of reviving the Mana Tree. That region you pick remains the entire hub of the full game and the 6x6 grid of destinations is about all you might ever see in the world at large unless you play again on New Game Plus.

Director Koichi Ishii and Producer Akitoshi Kawazu waste no time throwing players into the world of Legend of Mana with little more than a life preserver of an artifact to the player acclimated and then off on their own. When that first artifact is placed and the player's home is revived in the world, the story opens up and the player is given nearly free reign to determine their fate and how and when to return the Mana Tree to its former glory. 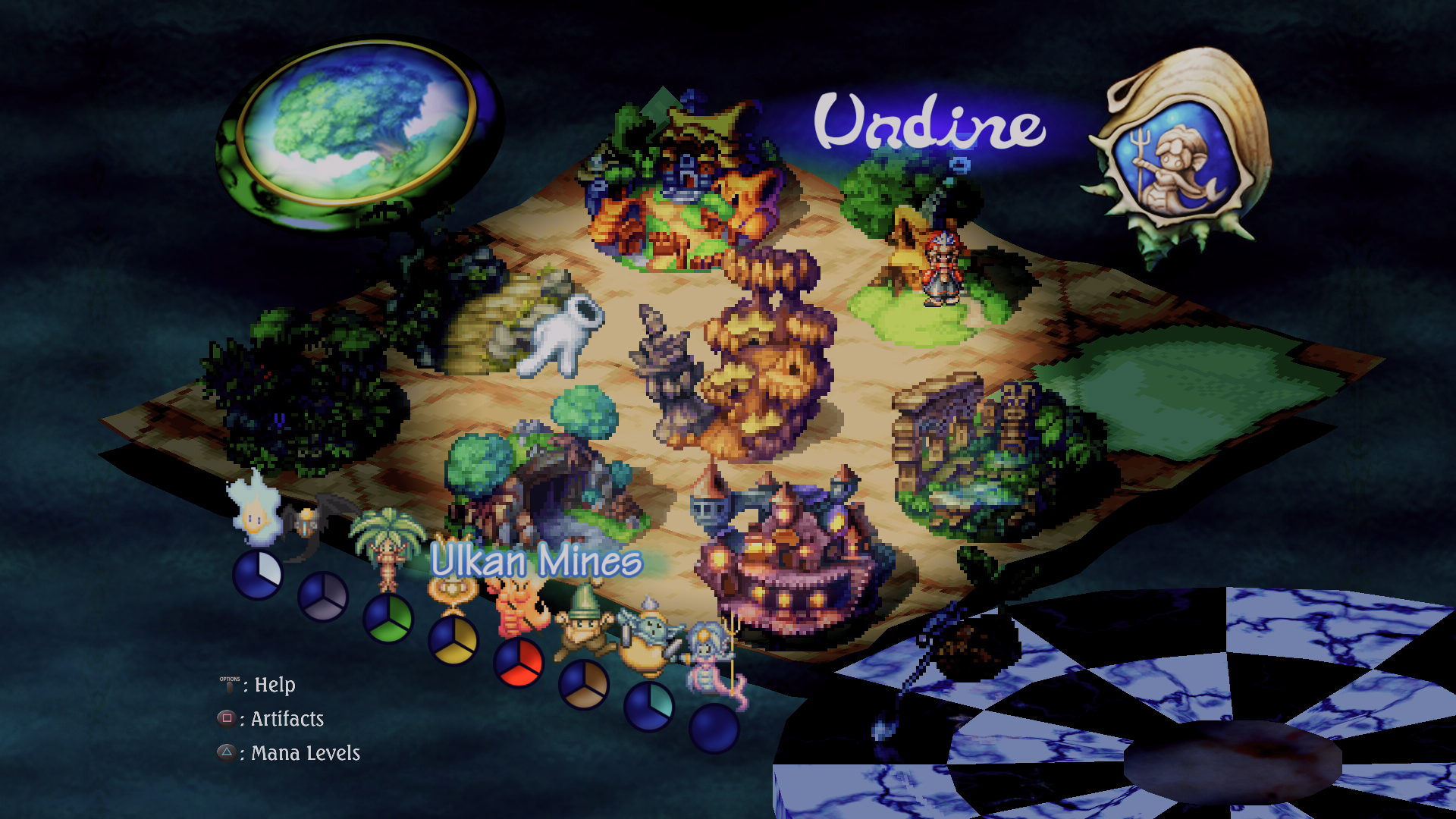 Laying down one artifact often leads to another as players explore the dungeon or cities laid bare and everything the player does helps to restore the Mana Tree to its former glory. The paths players chart forward are their own but the game does offer some invisible guidance as players try to discover the mysteries of the Jumi and other races. There are three main storylines that players will come across during their adventures but the non-linear style of storytelling will often mean that players won't see the same events in the same order as other players.

That non-linear nature of the story is also one of its biggest downfalls. The player is given little direction on how to actually proceed through the story beyond placing new artifacts once in a while but even then, finding a story thread that pulls the player into these arcs can be an exercise in blind searching. Even worse are the side quests that can lock the player out if they explore the world in the wrong order or talk to specific NPC's at the wrong time (something I learned the hard way more than halfway through my first playthrough when I couldn't figure out why an NPC wasn't showing up to begin a new side quest).

Combat is the majority of what will take up the player's time in Legend of Mana, although thankfully you don't have to engage in as much as in the original game thanks to a newly added toggle to disable enemy encounters. When it does come time to do battle, the combat flows very similarly to Secret of Mana and the non-remake version of Trials of Mana. Your basic normal attacks come out sluggishly with a delay between being able to unleash the next combo. However, it's all of the other tools in the player's bag of tricks that make combat much more enjoyable.

You can link together normal and heavy attacks together in limited strings but it's the two unlockable submoves that give the player control of combat, unlike any other Mana title. These two additional moves range from a variety of movement and evasive moves as well as blocking and countering skills or my personal favorite, the ability to crouch down and regain HP over time. Investing time with these abilities often leads to unlocking more moves, twenty-six in all. Powerful weapon skills can be unlocked for each of the eight weapon classes and unlocking them usually requires spending enough time with these moves. At times, you'll have an AI party member with you (who can be controlled by a local 2P), but unless you're taking a monster with you on your adventures, you're going to spend much of your time in Fa'Diel solo.

Legend of Mana does a number of interesting ideas as an action RPG but the years have not been kind to the experience. What was once a widely celebrated and experimental RPG feels dated with only a fresh coat of background paint added to enhance the natural beauty of a Mana title that's given less attention than the recent SaGa Frontier release. The content on offer is identical to that of the PlayStation 1 offering plus the inclusion of what was once a PocketStation exclusive minigame and lesser additions such as the ability to save anywhere and a completely remastered soundtrack (with an option to switch back to the PS1 original).

Nearly all of the other changes brought to Legend of Mana are purely aesthetics in general. The original 4:3 presentation is brought up to modern 16:9 presentations with most designs touched up in some form. The most glaringly obvious of changes is how the backgrounds have been handpainted and look gorgeous but look so starkly different from the chunky pixels of the player characters and enemies. Special attacks are a mess of particle effects and very early PS1  The backgrounds themselves look fine but I was constantly at a loss for where to travel through and could have certainly used some of the exit markers that frequently pop up in other remasters.

In contrast with Square-Enix's recent remasters, Legend of Mana is among their weaker offerings. This cryptic and exploration JRPG remains just as unintuitive as it once was two decades ago. For fans that want a pure look into the JRPGs of yesteryear, there's something special to Legend of Mana that still remains after all this time but it remains a title that only those looking for less handholding in their role-playing games would truly appreciate.

A timeless classic marred by conflicting visual identities and a disjointed formula, Legend of Mana is an experimental PS1-era title that planted the seed for many of Square's greatest RPGs to come in future years.