Layers of Fear: Legacy Review – How To Get Scared Everywhere

There is always something slightly worrying about a game, or any piece of art, depicting the hardships of an artist. While I’m sure most enter the concept with the best intentions, their desires can quickly turn to arrogant self-aggrandizing. Luckily, that isn’t the case with Layers of Fear: Legacy.

Released now on Nintendo Switch after the debut on PC, PlayStation 4 and Xbox One, this game follows the uncomfortable breakdown of a tortured and tortuous artist. This is not a game about the inherent suffering that comes with creating art, or anything else creators might accidentally bring to their creations. Instead, this is a game about something much more sinister and delivered very well.

The Nintendo Switch doesn’t have a lot of horror games at the minute, and Layers of Fear: Legacy right now is probably the best example of the genre on the console. Unfortunately, not everything can easily be translated to the mobility of the Switch. Trying to play on the bus or anywhere with natural light robs the game of its atmosphere, and frequently its tension. While the game did make me jump, there was nothing scarier than seeing my own hunched visage reflected in the dark screen.

When I’m not busy avoiding all the reflective angles of the Switch, Layers of Fear does a great job of keeping up the fear through good old fashion misdirection. The smaller screen is nice for moving around the house, but it can be much trickier to read the in-game text on the shorter screen. Without getting into the plot, you’ll find yourself exploring a creepy old house, complete with terrifyingly gothic artwork and haunted library. In the beginning, you can quickly explore the home in its normal state. Scattered around the home are half-finished paintings, notes between an unhappy couple and a quiet children’s room. Once you enter the workshop, however, the house shifts. Suddenly hallways twist and wind in unfamiliar ways. Rooms and surprises appear from behind impossible doorways. 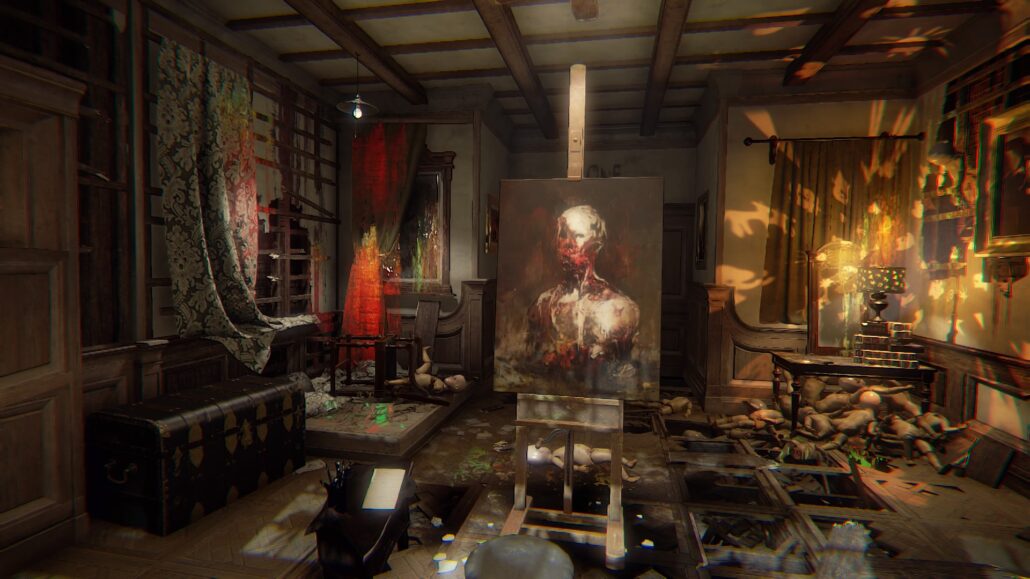 It’s a horror game through and through. It's an emotional fear that permeates through Layers of Fear. You won’t be looking for weapons or hiding in the cupboards, but you might be scared to look over your shoulder.

And the soundtrack only undermines whatever confidence you had left. At times it's sorrowful and understated, but as the game started to descend into the supernatural madness, the soundtrack plays as many tricks on the mind as the visuals.

Layers of Fear: Legacy is all about tricking the audience. Building upon its foundations of the tortured creators, the most surreal and creepy moments of Layers of Fear are all based around the houses many paintings. The terrifying otherworldly nature of the paintings start normally enough, we’ve all felt that strange unnerving realization that a painting is watching you from its position on the wall. But it doesn’t take long for these paintings to start doing more than simply following you around the room.

These pieces of disturbing artwork are portals to difficult and dangerous worlds. Worlds that keep sneaking into your own distorting home. The moments when these creepy paintings bleed into the real world are the highlights of Layers of Fear, they use unconventional tools to create deeply creepy situations.

Walking around the impossible architecture of Layers of Fear is surprisingly satisfying as well. The walking animation is really impressive as you stomp and shuffle your way through the game. It hints at a wider part of the game, but even without that, it's just a really nice touch.

On top of all of this, the Nintendo Switch version comes with the Inheritance DLC that gives you another perspective on this haunted home. It’s another good story that delves into the unpleasant side of the mind, and the creepy that it can create.

Layers of Fear: Legacy doesn’t have the budget or action of Resident Evil 7, but it creates an impressive, claustrophobic environment works for its short playtime. As a narrative horror game, the story isn’t that original, but it does play well with the setting and the way the mechanics twist the world. PT might be the hallmark of the domestic horror, but Layers of Fear takes a similar design and adds an impressively unique design. Although being mobile doesn’t add anything to the game, it’s a lovely addition to the Switch’s growing indie library. From playing on the big screen to the smaller one, you can see the loving detail built into the game.

Layers of Fear: Legacy is a scary reflection of humanity, but perhaps not as scary as your own reflection on the Nintendo Switch's screen.