Konami’s been a major player in the coin-op business for longer than I’ve been alive. While their output of gaming has waned in recent years, there’s still a long lineage of shmups and games designed to eat up those quarters otherwise saved for laundry day. With a major anniversary looming for Konami, the publishing studio has worked together with HAMSTER Corporation to release the first of three planned compilations on PlayStation 4 and other modern consoles.

HAMSTER Corporation’s assortment of arcade collections has all popped up in one form or another on the PlayStation 4. If you’ve missed the whole arrangement of Konami titles at $8 a piece, finding just three classic Konami arcade titles more than covers the price of admission. Among the roster of side-scrolling STG’s are some gems that still hold up even three decades after release. Any self-proclaimed Gradius fan should be excited to get their hands on NEMESIS or the oft-forgotten VULCAN VENTURE. Two of the STG’s in particular in the Arcade Classics Anniversary Collection, Scramble, and TYPHOON, are both important parts of Konami’s arcade lineage but aren’t particularly great to play on a modern console. The most surprising addition to the collection is that of HAUNTED CASTLE, a Konami arcade title that came out a year after I was born and established many of the enemy tropes and song selections that remained staples of the Castlevania series even today.

When playing the various STG’s back-to-back in Konami’s Arcade Classics Anniversary Collection, it’s common to see just how much these arcade releases were cut from the same cloth. The sequential upgrade systems that Gradius was known for persists through so many of the later titles in Konami’s library. I knew that LIFEFORCE was developed as a spinoff of the Gradius series, but to see the selection bar and upgrades work so similar to the original Vic Viper adventure was quite surprising. It also offered some basic voiceovers announcing the areas that players will do battle in, such as the stomach muscle zone.

The whole collection of eight Arcade Classics in this Anniversary Collection each built off of the original HAMSTER Corporation releases, minus some interesting caveats. Players only have access to a select number of options to each title. These include difficulty, starting lives, aspect ratio, controls, and smoothing filters. Any of the finer tweaks like dip switches to unlock bonus ships are locked to their default states. It’s an unfortunate oversight and I would’ve loved to see Konami treat these arcade titles as the definitive versions with all of the customization options previously available in the other virtual releases.

One incredibly important addition to the Arcade Classics Anniversary Collection is the use of instant save states to save and rewind your progress. While it isn’t as progressive as the rewind and fast forwarding options that Digital Eclipse coded into their SNK collection, it serves as an important tool to achieve a high score in each Arcade Classic. With every PlayStation 4 trophy tied to your score achievement, being able to roll back to a previous moment can save those crucial ship upgrades that you’ll need in order to get the high score on just a single credit. As a sort of failsafe, you do have to jump into the pause menu and manually choose to save or load a savestate as there isn’t an option to rebind this feature to a controller button.

Joining the collection is a virtual PDF sourcebook of design documents, advertisements, and just about any other paper document that Konami could get their hands on to. For the sake of digital preservation, the extra gallery is reason enough to pick up Konami’s Arcade Classics Anniversary Collection. I was rather surprised with some of the original ship designs and deeper cuts that had never been released in a digital format before.

Depending on what region you pick up the Arcade Classics Anniversary Collection in, you’ll be subjected to the difficulty and balancing tweaks specific to that region. Many of these games were notoriously more difficult in North America and the likes of LIFE FORCE still little the entire screen with enemies and bullets in an attempt to steal your virtual quarters. Unfortunately, if you want access to the Japanese builds of these games, even on the Nintendo Switch, you’ll need to purchase a second copy of the Arcade Classics Anniversary Collection released in that region.

Konami’s first release of Anniversary Collection focuses on the scrolling shoot’em ups (and the unusual but essential addition of HAUNTED CASTLE) that built the foundation for their decades of arcade lineage. While not every title holds up three decades after release, Konami’s Arcade Classics Anniversary Collection is an essential celebration of previous titles and is only the first step towards the Castlevania and Contra collections soon to arrive in digital forms. It’s a tough sell to get in on this Arcade Classics collection if you already own a couple of the HAMSTER releases on PS4, but the added sketches are worth browsing through if you’re a fan of rediscovering long lost design documents. 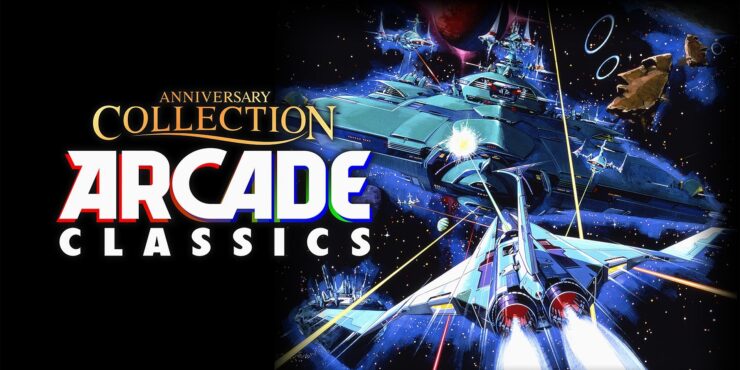 Konami's first anniversary collection for their 50th anniversary contains some notable arcade classics, but the fact they've been previously released digitally with more options should appeal to only the most ardent of nostalgic fans.