What’s that? Another side-scrolling cutesy Nintendo platformer? You’d be forgiven for writing most of these off entirely, following releases like Chibi-Robo. Often mediocre and simple, slow paced with the usual variety of three-special-collectibles in each stage to make you go an replay them. Well, quite a bit of that is true for Kirby: Planet Robobot too, except one thing: Planet Robobot is not mediocre, in fact, it might be one of the best platformers on 3DS.

The game begins with Dreamland under threat from the planet-sized ship Access Ark, housing a mechanized race that wish to dominate Kirby’s homeland. King Dedede is understandably vexed, and Meta Knight even boards his giant airship in order to meet the invaders head-on. Needless to say, it doesn’t go well, and it’s down a plump pink puffball to save the day.

So Kirby: Planet Robobot is your usual Kirby formula, taken straight from Triple Deluxe. Kirby floats, blows enemies away with air, and absorbs enemies and their powers – zero shock to anyone who’s ever seen Kirby before, then. What gives Planet Robobot a fresh take on the formula is a surprisingly good use of the system’s 3D (remember that?) and some new powers which switch the gameplay up in fun ways.

The use of background and foreground is noticeable and welcomed in Planet Robobot – often items or enemies swooping in from the back will give you the necessary couple of seconds to prepare and retaliate, with some stages giving you the option to flip between the two scenes at will. In these moments, there are flashes of genius – those rare moments that actually encourage me to flip my console’s 3D slider to the top and briefly enjoy a stereoscopic experience. And those moments are genuinely fantastic, though even the power of the New 3DS isn’t enough to stop 3D gameplay causing frame rate drops.

There are some genius moments at play here, seamlessly woven into the stages. At one point I absorbed an enemy to gain the Jet power, allowing Kirby to blast about the screen and tear through enemies – little did I know this power allowed me to access a small shoot-‘em-up stage where Kirby flew over buildings and blasted enemy robots who were coming in for the kill. These stages play out similarly to another unique power-up based stage where you use the Wheel power to speed past enemies and jump over obstacles – these stages are always over far too soon and I found myself partially hoping to miss secrets and collectibles, just so I have an excuse to revisit the stages later on. 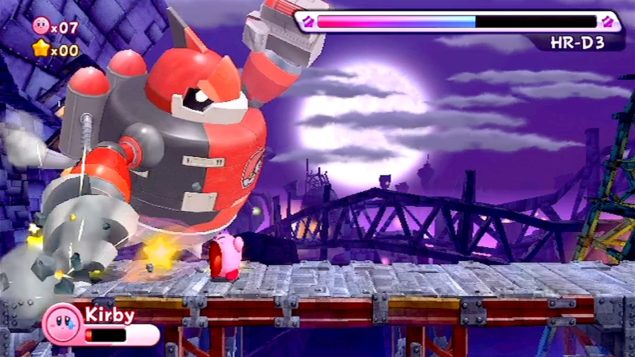 The amount of love that’s been put into Kirby: Planet Robobot is clear, although that cliché of 3DS platformers being too easy is very much present and accounted for. It is, after all, why Kirby became so big in the first place, offering simple platforming experiences that pretty much any player can enjoy, though it does mean more experienced players will have less reason to be invested. Many stages feature mini-bosses, for example, which are lovingly created, but easily dispatched – Kirby’s powers are likely to tear through most enemies with relative ease, making the screen-wide health bars much less intimidating than they should be.

But even the ease of play can’t detract from how much fun there is to be had here. Each World has five stages, and it’s easy to get sucked in and end up playing Worlds from beginning to end ad infinitum. The only real criticism I can find of the world design is that, for a game titled Planet Robobot, there’s not actually much in the way of robotic areas. Early stages mainly follow archetypal platform themes, such as Water stages, Fire stages, et cetera, with some robotic fiends wandering around them. But of course, the highlight of the game has to be the Mech suit.

Robo Kirby? Mecha Kirby? I’m not sure what to call it, but Kirby’s latest ride is brilliant. What at first appears to be an overpowered game-ruining feature actually turns out to be an overpowered game enhancing feature. It cannot be denied that swiping your robot’s laser sword arms about and cutting up enemies is a brilliant experience that put a smile on my face. Each of Kirby’s unique powers to be absorbed take their own form when combined with his mech, resulting in the same powers you may expect, but taken to the extreme. Wheel power up? That mech is now a hot rod. Jet power? Well, it’s basically a plane. Sword? That’s giant laser sword arms alright, and it’s awesome.

So the sum it all up, is Kirby: Planet Robobot worth it? It entirely depends. If you’re interested in a fun aside, something to keep you mindlessly busy for a few hours, Planet Robobot cannot be beat. For this purpose, it’s fantastic. But if you’re looking for a fresh challenge, something to keep you guessing, then this just isn’t it. Kirby fans know what to expect and they’ll love it.

Smart, simple and loads of fun - there's plenty to enjoy about Planet Robobot, though many gamers will be deterred by the lack of any real challenge.