I feel that I can't be too harsh on Kirby. Kirby was created for simplicity in almost every regard. He is small and round, making him simple to draw. He has a cute, friendly expression on his face at all times. Even his first game was designed from the ground up to be approachable for younger and less experienced players, thus the decision to give Kirby a near-infinite jump, allowing him to sail right over difficult platform challenges and enemies. As a result, I have a lot of patience for the tiny warrior, as I know what he was created for, and what he continues to represent in gaming. But that doesn't mean I'll grin while sitting through a fairly tedious game.

Kirby Fighters 2 is a very basic brawler obviously aimed at a younger crowd. While there's a lot of adorable Kirby goodness to love in this fighter, it won't have too much longevity unless you have a lot of patience. In this game you'll be fighting against a variety of enemies from the Kirby universe, using loads of different Kirby powers from the main franchise games, and you'll fight them again, and again, and again. The game is cute and polished but doesn't exceed my expectations in any aspect, and that's disappointing.

Let's start with the combat. In Kirby Fighters 2 you do battle against other Kirby powers and enemies that will be familiar to Kirby fans, including Waddle-Dee, Gooey, Meta-Knight, and King Dedede. You will be able to take control of essentially any Kirby power from the series, and all of those powers have a variety of unique moves. The idea is that the gameplay variety comes from the range of Kirbys you can choose from, and while playing a bunch of different Kirby characters is fun, it gets old fast. 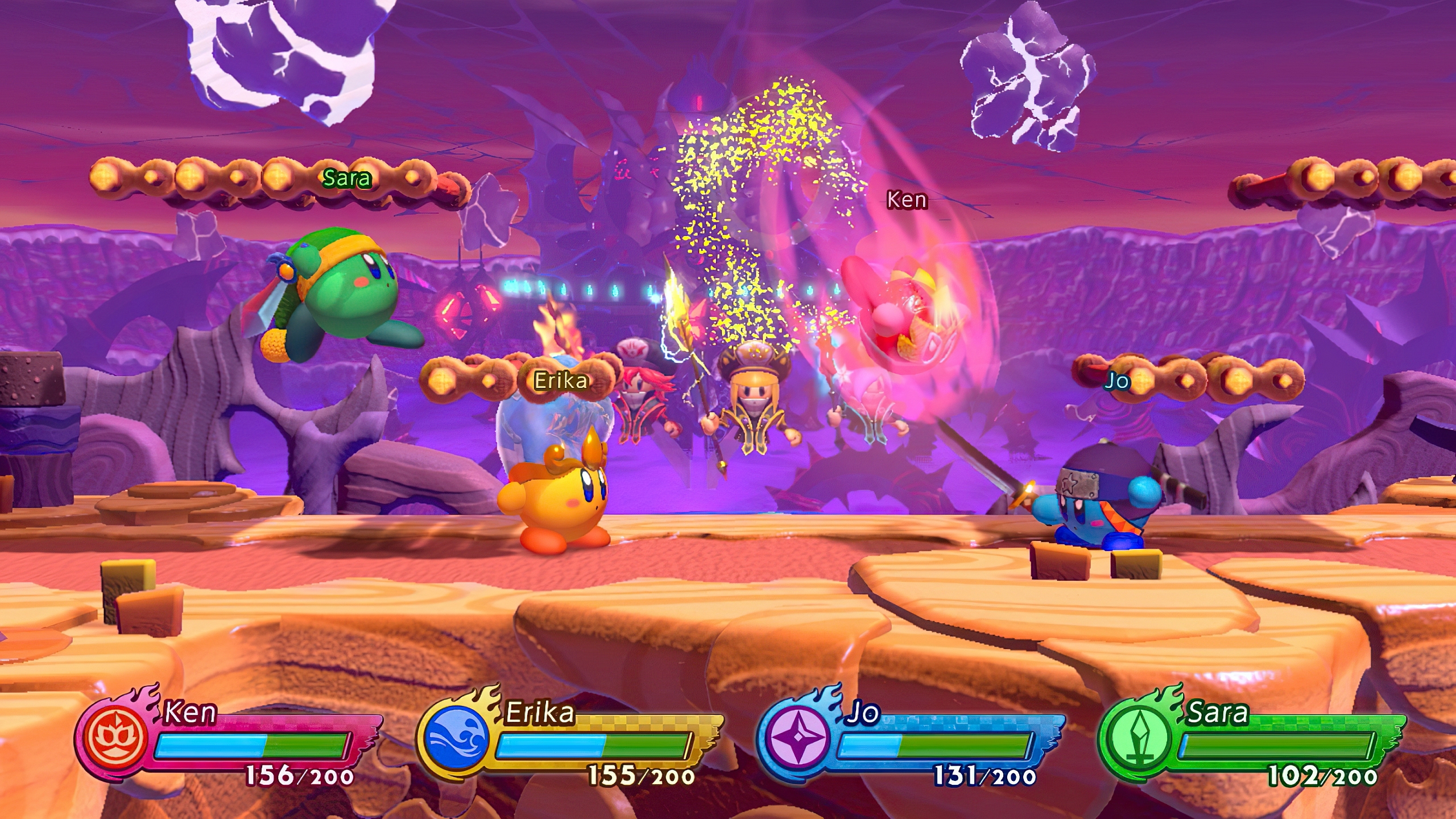 While moving through a variety of stages and using a whole bunch of different Kirby abilities against enemies, Kirby games are a great experience. But there isn't any of that here. Instead, you should play Kirby Star Allies or Planet Robobot, because Kirby Fighters 2 is just the brawling, over, and over, and over again. In the story mode you are introduced to a tower grind. You ascend a tower, with each floor being a new enemy to take down, some with mild modifiers, such as high speed or damage. For each floor you clear you'll earn yourself a permanent power-up of some sort, enhancing your speed, attack, health, etc. And it just keeps going.

Each fight take place on a Super Smash Bros.-style stage, minus the falling off. Instead it's just about beating your enemy until they give up, and you will - depending on what Kirby ability you're using - be able to combo enemies, pushing them from one side of the stage to the other, comboing them against the wall, teaming up with a friend to take them down. It has its moments, for sure, but those moments quickly lose their lustre when you're doing it for 20 floors in a row. And no, you can't swap what Kirby ability you're using as you ascend the tower, you're locked in and using it until you get sick of it.

This repetition is just devastating, honestly, because the fights themselves aren't bad, and the Kirby abilities are fun to use, but in this scenario, you're forced to use them until all of the fun wears away. You will be able to take on the story mode with a friend, luckily, but even then your friend is probably going to get bored long before you get to the end of the tower, and even more sick of the fact that a second player may only control either a Waddle-Dee or a Gooey, and not one of the actual Kirby abilities. This is all absurd. 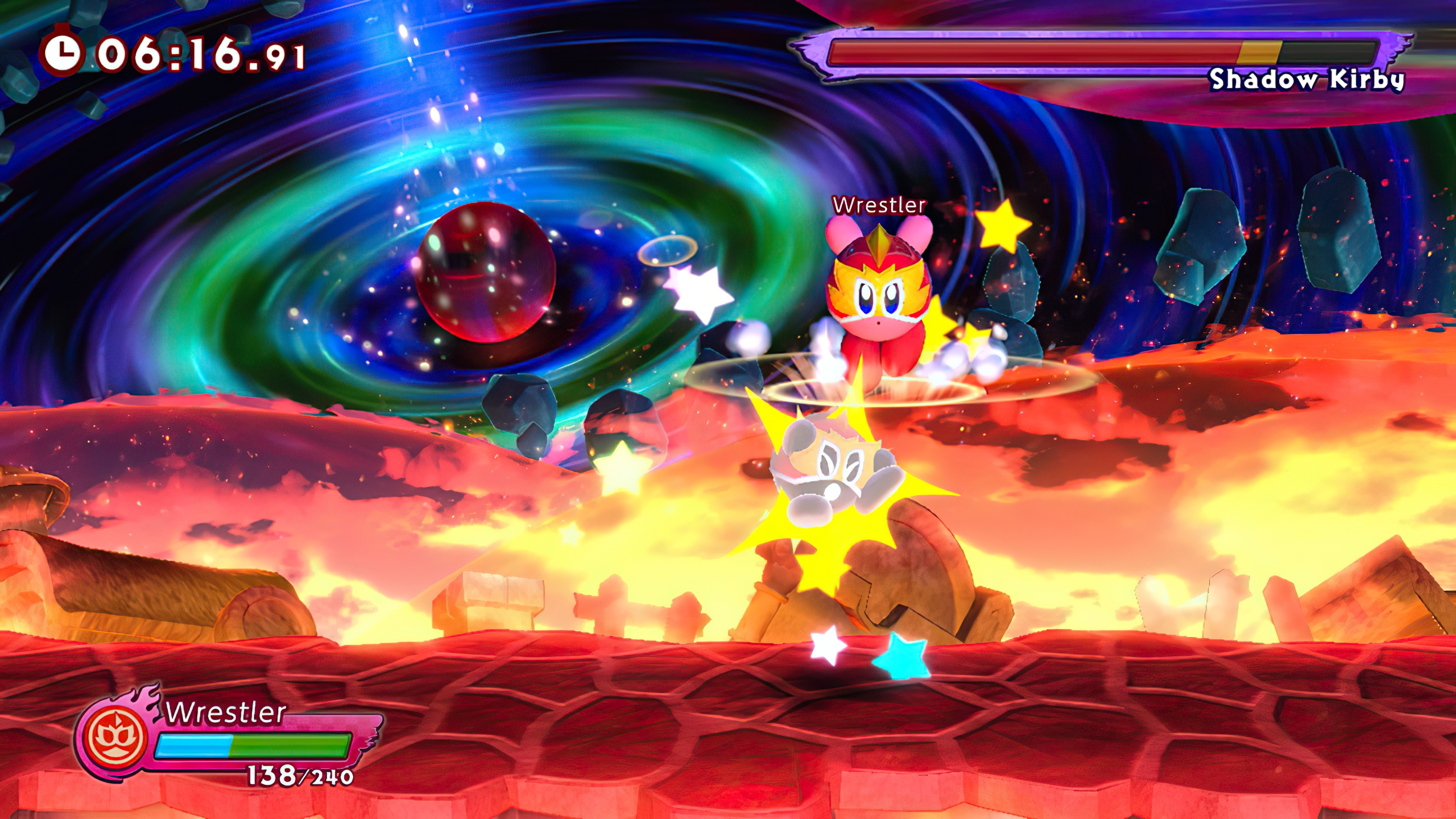 Outside of the story mode, there's a battle mode where you can fight with or against your friends - again, fine, but the combat isn't deep enough to carry a competitive VS experience. There is an online play mode, which a little over a week after launch has barely anyone online to play with, and a one-handed play mode which is just… Well, it exists. This is the definition of slim pickings.

But in fairness to Kirby, this is a reasonably budget-priced game. It's also one which is entirely boring. But this isn't a game for me. It's clearly a game aimed at much younger, less experienced gamers who want to have some fun with Kirby. But even for those Kirby fans, I can't help but think paying a bit more money and instead investing in Kirby Star Allies would be a far better use of time and money. Younger gamers would still have all the same fun, but with more variety, and of course parents could get involved too.

And that's where Kirby Fighters 2 sits. It's a game that essentially exists either to solely be a simple time-waster or a shared experience with a far younger gamer. And both of those are fine, but there are also better games for either of these purposes - heck, there are better Kirby games for those purposes on the same system Kirby Fighters 2 is available on. And that's what this boils down to. Kirby Fighters 2 is just too simple and too repetitive to really be recommended. But Kirby really is cute. Lucky bugger.

Kirby Fighters 2 is an adorable, polished brawler that is sure to make you smile - but not for long. The game is great while you're unlocking and using new abilities, but you'll soon be forced into repetition after repetition while playing, and that'll suck the fun out of things. Good for young gamers and less experienced players, but there are better options.