Kirby and the Forgotten Land

Kirby fans are nothing if not patient. Nintendo franchises first started making the leap to 3D over 25 years ago, but while the likes of Mario, Link, and Samus got to stretch their legs in the third dimension, Kirby has stuck to charming yet simple 2D platformers and the occasional quirky experiment like Kirby Canvas Curse and Kirby’s Epic Yarn. Some of those games were a lot of fun, and yet, Kirby fanatics couldn’t help but dream about what it might be like if the pink puffball got his own Mario 64 moment.

That question is finally answered as Kirby and the Forgotten Land sees our inflatable hero float into the third dimension, and perhaps back onto the Nintendo A-list. Is this a fully-rounded adventure, or will it leave fans flat? Time to bite into Kirby’s latest. 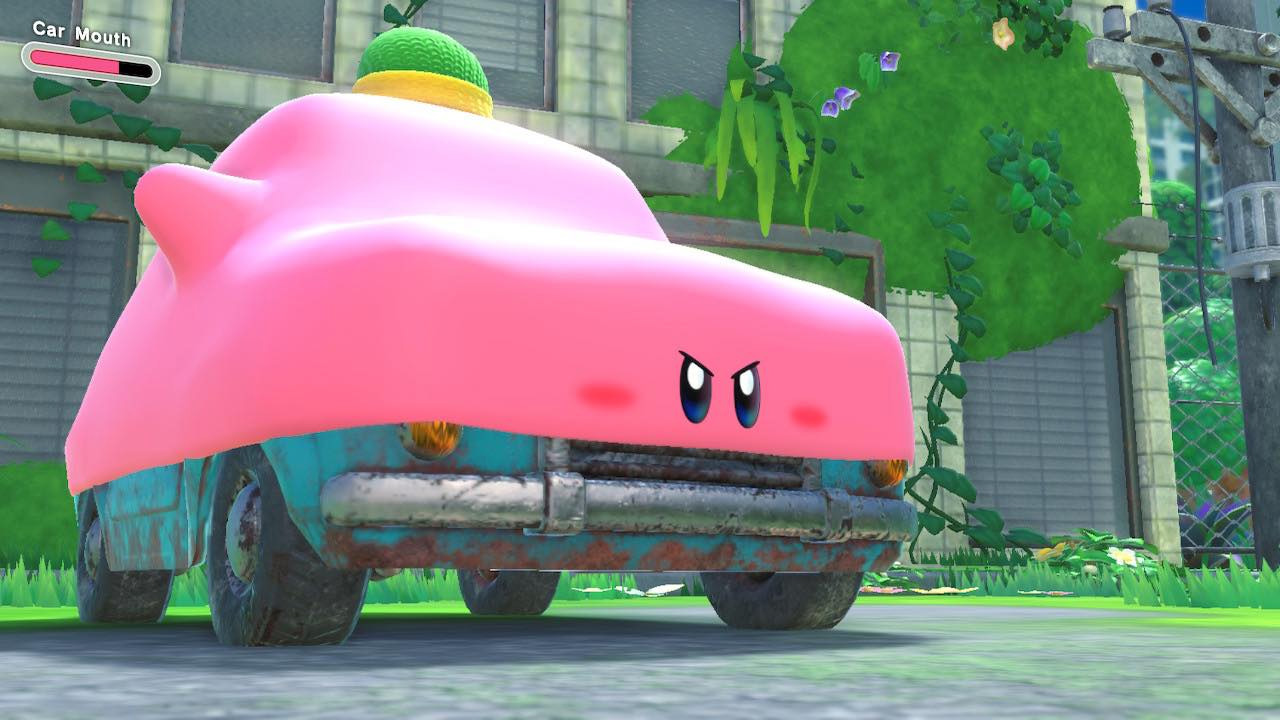 Kirby and the Forgotten Land begins with our titular marshmallow being sucked out of his usual pastel-colored surroundings and deposited into a mysterious post-apocalyptic world replete with the crumbling, overgrown ruins of some lost civilization. Unfortunately, Kirby doesn’t have time to take in the sights, as an unruly (yet still adorable) group of animals called The Beast Pack are wreaking havoc, busting up the local Waddle Dee village and kidnapping its inhabitants. It’s up to you to get those Waddle Dees back and figure out just who (or what) is behind The Beast Pack’s dastardly deeds. You’ll meet some familiar faces along the way, but for the most part, this is a whole new world to explore.

If you’re looking for recent 3D Nintendo platformers to compare Kirby and the Forgotten Land to, it’s really more Super Mario 3D World than Super Mario Odyssey. The game features a traditional overworld map and is broken up into individual stages, rather than the sandbox-like playgrounds of Odyssey, although they’re typically longer than those in 3D World, lasting up to 15 minutes apiece. In addition to the main levels, each world also offers a number of bite-sized “Treasure Road” stages, which task players with completing challenges as quickly as they can. 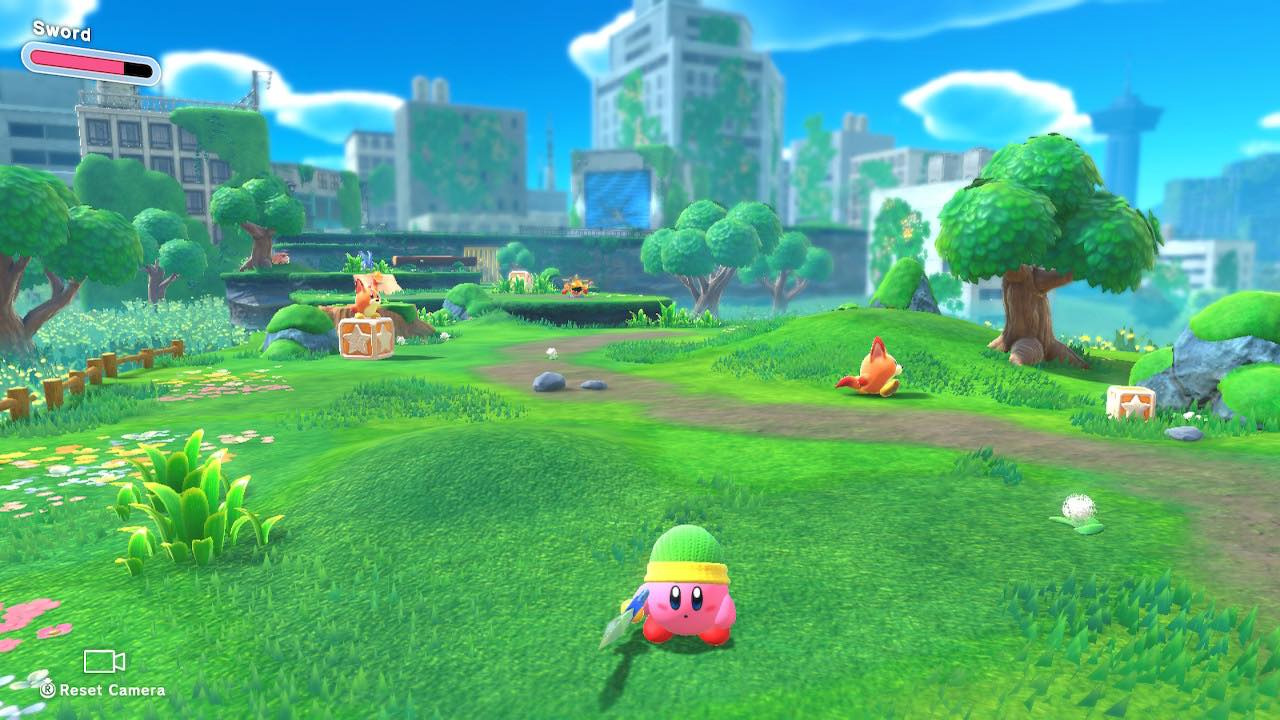 It may have taken Kirby nearly 30 years to make the jump to 3D, but worry not, playing Forgotten Land feels just as good as any other Nintendo platformer. Once again taking notes from 3D World, the game mostly sticks to set camera angles. While there are very occasional moments where the view of the action isn’t perfect, not having to fiddle with the camera stick is appreciated most of the time. Kirby is easy to maneuver, and all his basic moves, including his trademark enemy inhaling and flying, remain intact.

Of course, Kirby can still mimic many of his enemies, with classic powers like Fire, Hammer, and Sword returning. While most of the game’s copy abilities have been seen before, they can now be upgraded. As just one example, the basic Bomb ability can be powered up into a multi-bomb that lets you chain explosions and eventually homing bombs that actually sprout little wheels and chase down enemies (it’s as cute as it is deadly). 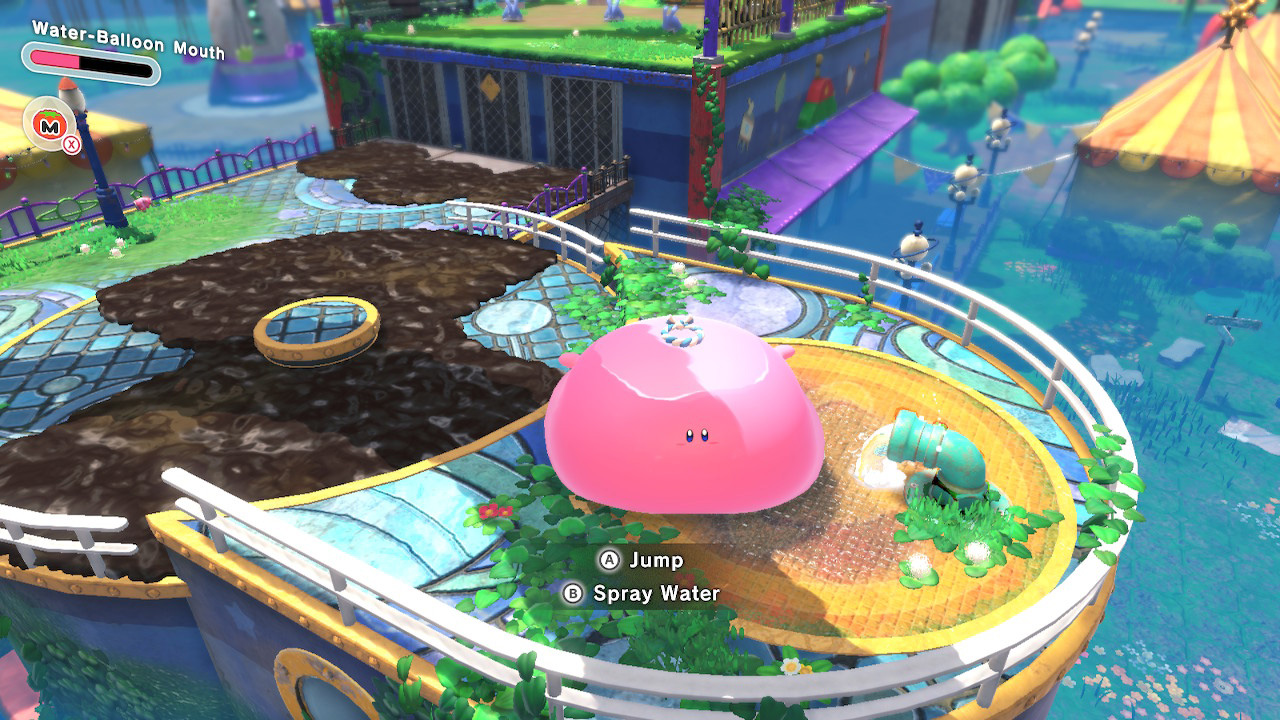 All new to the game is the much-memed “Mouthful Mode,” which lets players stretch Kirby’s unnervingly-rubbery body over larger objects such as cars, vending machines, traffic cones, and more. While the traditional copy abilities grant Kirby different attacks, the Mouthful Mode transformations completely change how he moves and interacts with the environment and are often the key to opening up new paths forward or discovering secrets. For instance, the car transformation can crash through walls while the traffic cone can break through cracks in the ground. Certain Mouthful transformations even change up Forgotten Land’s core gameplay, allowing Kirby to soar through an aerial obstacle course as a hang glider or take control of a roller coaster cart. 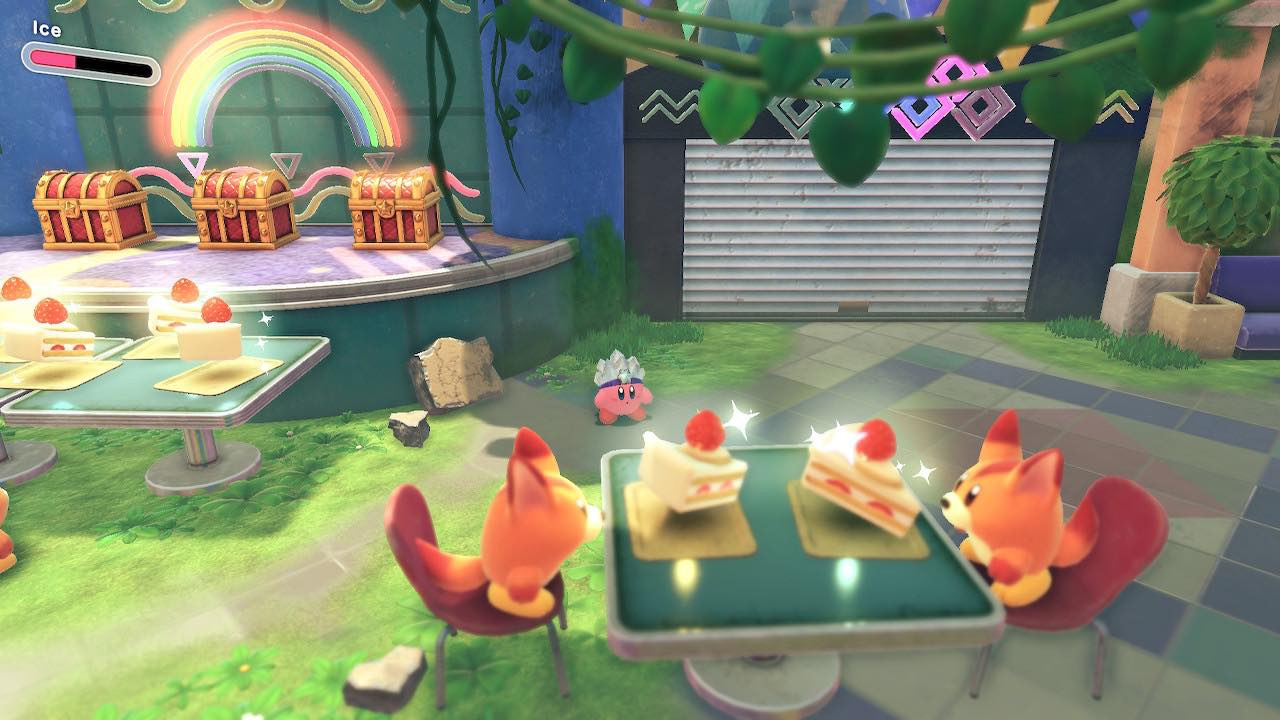 Kirby’s new abilities are put to great use by Forgotten Land’s wonderful level design. Not only are the game’s stages fun and varied, but there’s a logical consistency to them that you usually don’t see in Nintendo platformers. Forgotten Land’s first world takes you through a series of connected locales, from the downtown of a ruined city to a subway tunnel, to an abandoned mall, and onward. Each stage is full of great little touches as well. The mall stage is done up like an actual 90s-era mall, with chintzy carpet and decorations, a variety of shops, employee break rooms, and security stations. You’ll even catch enemies sitting down to a meal in the food court. Exploring every inch of each level is rewarded as they’re packed with secrets and collectibles, including Waddle Dees, capsule toys, copy ability upgrade blueprints, and more. Meanwhile, the game’s bosses are big, bad, and surprisingly intense. Some old favorites like King Dedede and a tropical variant of Wispy Woods return, but some of the new additions like the dizzy Sillydillo and hulking Gorimondo are actually my favorites. 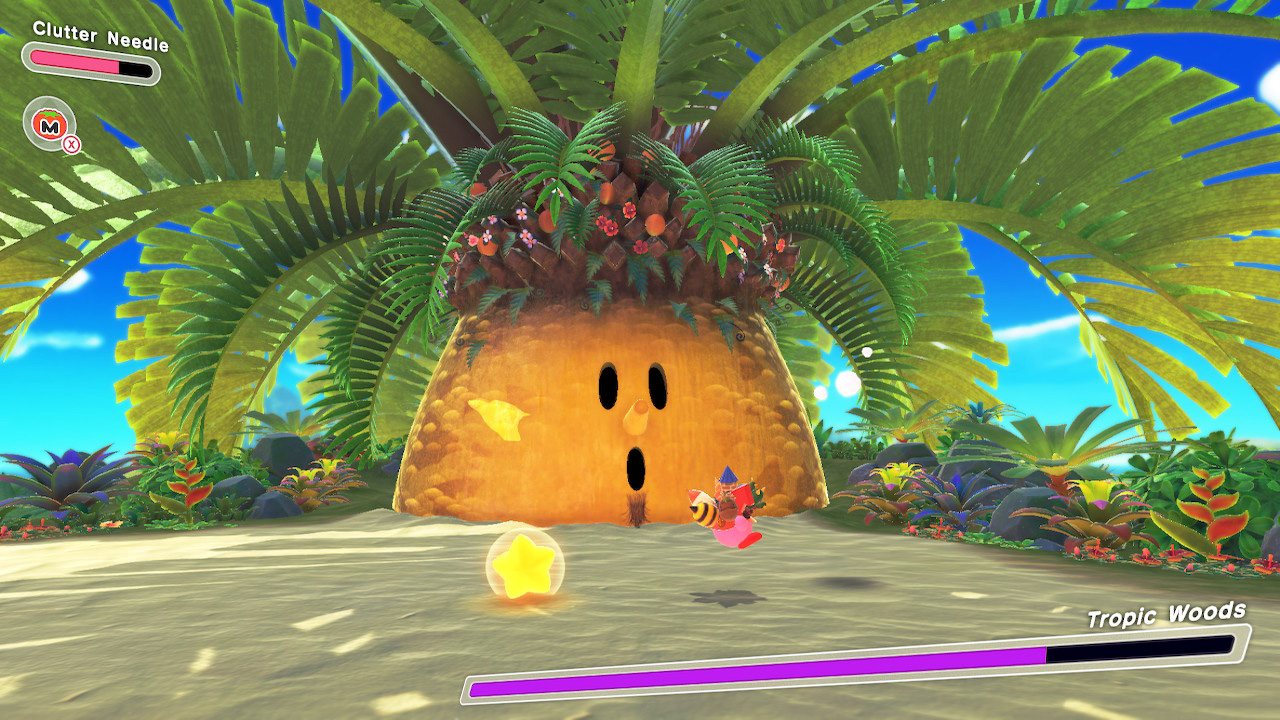 Kirby and the Forgotten Land’s stages are brought to life with some of the best visuals yet seen on the Switch. Each location is bright, colorful, and intricately detailed, and as a bonus, load times are surprisingly brief. Forgotten Land’s world isn’t just a collection of platforming challenges; its world feels lived in. Granted, the game only runs at 30fps, but it’s a consistent 30fps, and Kirby games aren’t really about split-second timing, so it doesn’t feel like a major drawback.

It should be said that the quality of Kirby and the Forgotten Land’s level design does slacken slightly through the game’s middle stretch. The creativity of early worlds gives way to common platformer themes (ice level, desert level, etc.) and some elements start to be reused. The mall theme mentioned above reappears in the desert world, and there are some relatively straightforward boss-run stages. Don’t get me wrong, Forgotten Land’s middle section is still a lot of fun, it’s just not quite as brilliant as what comes before and after. Thankfully, the game rallies in the home stretch, delivering a climactic series of stages and boss battles that are as bombastic as any AAA game I’ve played in the past couple of years. 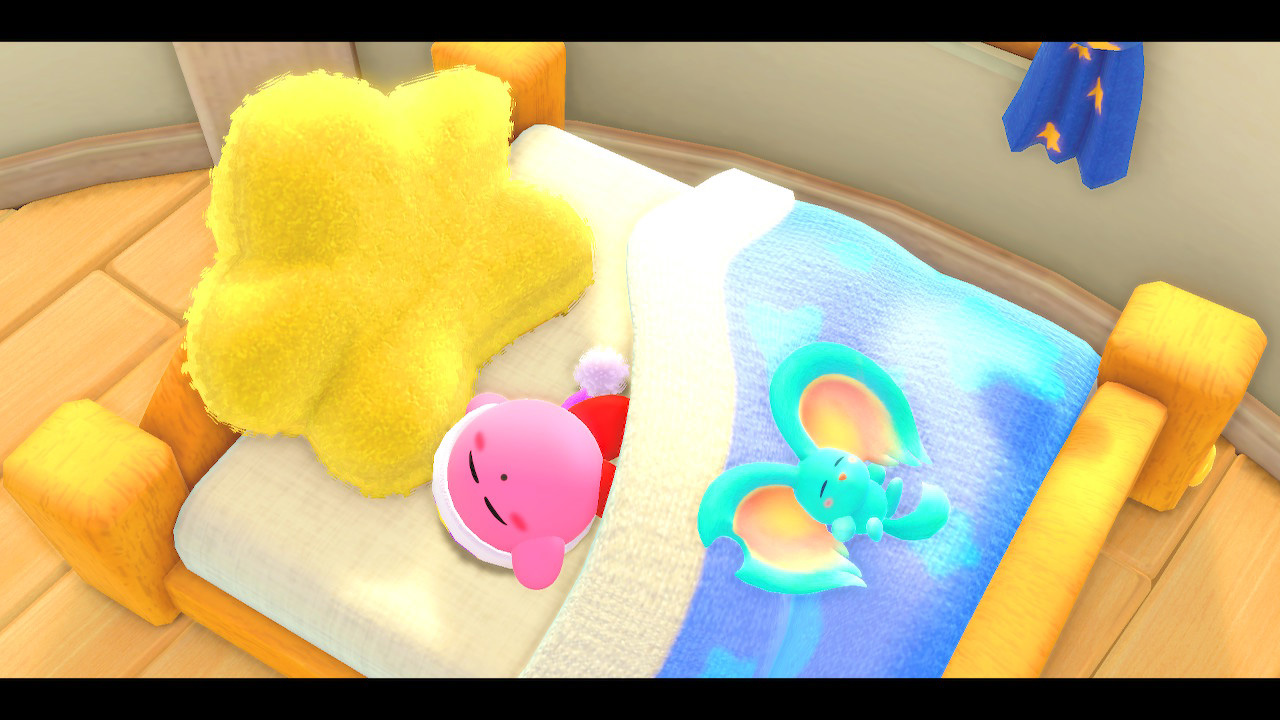 Yes, it’s a big, bad, dangerous world out there for Kirby, but thankfully he has a base to call home. Rescuing Waddle Dees brings their village back to life, with fun extras like Kirby Tilt-and-Roll and other minigames, an arena where you can re-fight bosses (and perhaps some guest stars), and shops that will sell you items to help you through levels. Kirby even gets his own house where he can take naps if he wants (at last, a video game protagonist I can truly relate to).

Overall, this feels like the most tightly-packed Kirby game to date. The main story will take most players a solid 7 hours to play through and those who want to tackle all the game’s challenges for 100 percent completion could easily spend 12 to 15 hours (or more – admittedly, I still have a few stay things to collect myself). And hey, the game also supports co-op, so you can replay the whole thing with a friend. Honestly, you could probably fit several of Kirby’s past games inside this puffed-up adventure.

This review was based on a copy of Kirby and the Forgotten Land provided by publisher Nintendo.

Kirby and the Forgotten Land is one of the absolute best first-party titles the Nintendo Switch has to offer. The game feels great to play, looks lovely, and introduces a vibrant and surprising world packed with new mechanics, challenges, and content. Kirby fans have been waiting a long time for his first 3D game and Forgotten Land truly is the pink one’s Super Mario 64 or Zelda: Ocarina of Time, so puff out a sigh of relief and eat heartily.