Kingston has kicked things off with another go at the NVMe market and this time they’re doing it with the new KC2000 NVMe PCIe SSD. The Kingston KC2000 lineup is using a Gen 3.0 x4 Silicon Motion SM226EN controller taking the lead on Toshiba’s 96-layer 3D TLC NAND. They’re claiming read speeds up to 3200MB/s and write speeds up to 2200MB/s. The KC2000 is targeting more of the professional and high powered computing markets first while still being a solid option for enthusiast builders and gamers. Security has been all over the news lately thanks to certain chipmakers and is a primary focus on the KC2000 with their 256-bit AES Hardware-based encryption and compatibility with TCG Opal 2.0 security solutions along with built-in support for Microsoft eDrive support.

The packaging of the Kingston KC2000 is a bit underwhelming coming in a blister pack rather than a nice box like so many others.  While this surely doesn't reflect the quality of the product it can be a bit offputting to those who live to collect their boxes for future use, this one will end up right in the trash for most. It does come with a bundled key for Acronis True Image so you can easily replace your existing storage solution with this one, a welcome value add that isn't advertised on the package.

The drive itself is jam-packed full of the Toshiba 96-layer 3D TLC NAND dies with the top facing side managing to squeeze in the Silicon Motion SM226EN controller and be wrapped up in one of the more questionable stickers that manage to nearly hide the fact that Kingston did a good thing, aesthetically, by choosing a nice black PCB to build the NVMe drive on.

Our test bench is now using the EVGA Z370 Classified K paired with an Intel Core i9-9900K at 5GHz paired with 16GB DDR4 3200 RAM and decided to go sans dedicated GPU.  The reasoning for this was simple as I had to remove the GPU to access the secondary m.2 slot so that I could run the tests.  Before starting the tests I loaded the NVMe drive up to 60% capacity so that the testing would not be run on a clean empty drive.  One metric that we're working on plotting is sustained transfer over the size of the drive as we found the Kingston KC2000 to be a very solid performer when moving data and sustaining a constant 1.1-1.3GB/s transfer rate over 600GB folder move putting it on par with the fastest drives we've tested when moving the files for loading up the drive.

Right off we see the KC2000 stand up with the best when it comes to reads following the same ramp curve as the EVO 970 Plus while being faster at reading smaller than 8KB sizes.  The write performance isn't quite as fast but is considerably faster than QLC drives like the Crucial P1 resulting in a very good experience overall. 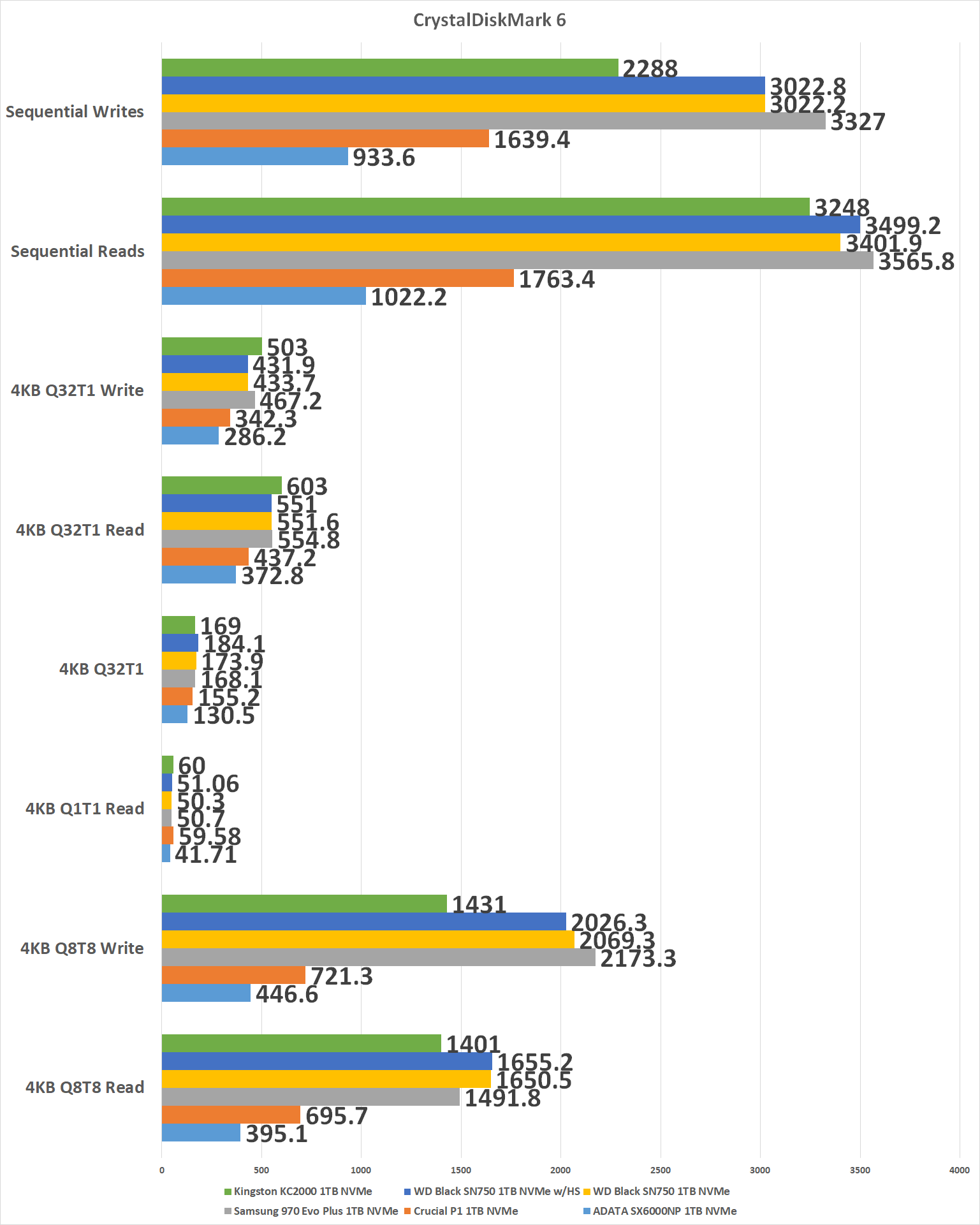 CrystalDiskMark 6, which we'll start breaking into more digestible charts after this one, shows a very similar story as the ATTO benchmark in where the KC2000 sits in terms of performance. Hitting its advertised sequential reads and writes the KC2000 shows itself as rather competent.

AS SSD continues to show the KC2000 sitting right in the expected performance category that it prices itself into.  While it's easy to look at the SN750 and the 970 EVO Plus and think they're wildly faster at times, it's really only in the absolute peak that they are, otherwise the KC2000 stands up well. 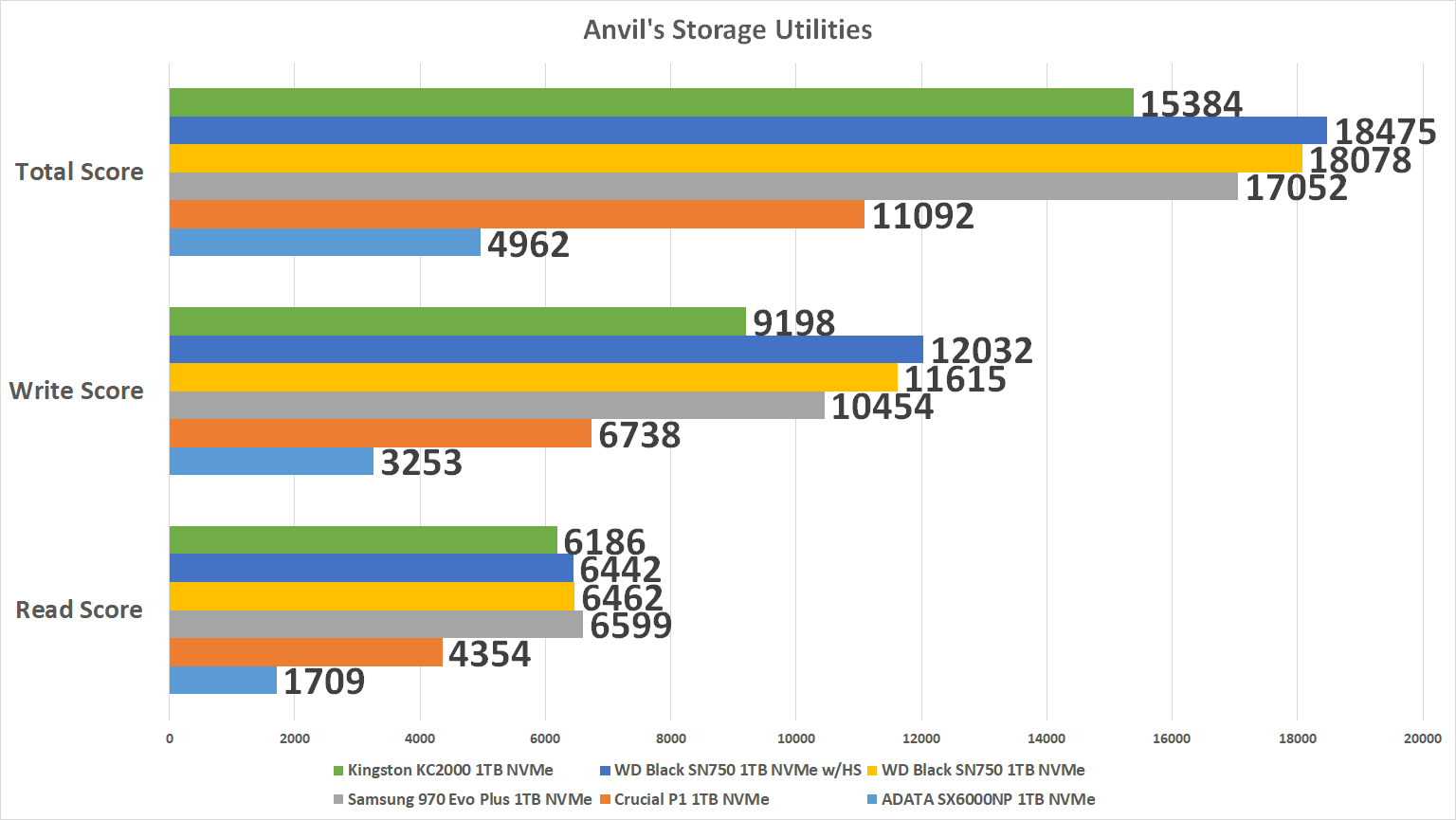 Anvil shows the whole performance story fairly well.  The KC2000 stands up there the fastest when files are being read, which is your more often used experience.  While it falters in the writes category it's still substantially faster than drives like the Crucial P1

The Kingston SSD Manager is the software that is available for the KC2000, among other Kingston SSDs, and while it's not very deep it is a useful utility that I would recommend everyone with the drive install.  The software gives you access to important information like drive temperature and health, the ability to update the firmware of the drive, as well as a tab to let you know what security is enabled or disabled.

Security is one of the main features of this drive with the inclusion of 256-bit AES Hardware-based encryption and compatibility with TCG Opal 2.0 security solutions along with built-in support for Microsoft eDrive support.  This means you have the ability to setup a password for the drive that will keep its contents safe from prying eyes who don't have that password even if they remove your drive from the computer and install it into another.  This may seem like an arbitrary add on for people who aren't too concerned about security, but those who are it is a huge value add, especially for people on the go with sensitive work data.

The Kingston KC2000 1TB NVMe SSD proved itself to be a very competent contender in the NVMe space and is a much better option for overall performance than their A1000 lineup for not a whole lot more money.  This drive isn't aimed squarely at the gaming and enthusiast market but rather the business and security conscious consumer and with features like 256-bit AES Hardware-based encryption and compatibility with TCG Opal 2.0 security solutions along with built-in support for Microsoft eDrive support it delivers.  That is not to say that gamers and enthusiast builders won't benefit greatly from this drive as well.  The overall performance is solid and stands toe to toe with the best when it comes to reads, which will be felt in startup and load times.  The writes, however, will suffer a bit compared to drives like the SN750 and the 970 EVO Plus, but you're also going to save in the range of $50 at the 1TB level by going with this drive, a tradeoff that isn't a bad one in the least.  Kingston has delivered a solid performing NVMe drive that I have no problem recommending for its performance and price.

A solid and secure drive that doesn't give up too much performance but still falls a bit behind the fastest.