Today we are going to be looking at Kingston's 1TB SSDs in their new DCR and KC series. The company sent over the two flavors to us a while back and while they seem to be pretty similar, there are certain differences in the drive which would make them shine in different areas. While the DC450R is part of a (entry-level) data center series, it is actually a perfectly feasible commercial SSD because it lacks most of the sophistication that make up a good server SSD (like power loss protection capacitors). The KC600 on the other hand is targetted dead center at the mainstream consumer market.

The DC450R will set you back $160 and the KC600 costs $121. The DC450R has 894 GB of usable space onboard while the KC600 can use the full 954GB. The difference is due to significantly more over-provisioning on the DC450R. Both SSDs use the same type of Toshiba BiCS4 96L TLC NAND although they have different memory controllers. The DC450R uses a rarer Phison PS3112-S12DC memory controller while the KC600 uses the tried and tested Silicon Motion 2269 controller. According to the manufacturer the DC450R has been tuned for read-centric performance and has reliable performance.

The KC600 makes no such claims and is marketed in a very general manner. Both drives featured full hardware-based self-encryption suites. The DC450R has a write endurance of 582 TB while the KC600 (surprisingly) clocks in at 600 TB. The DC450R does have twice the MTBF however at 2 million hours with its KC sibling rated at 1 million hours (although in our opinion this is usually under-rated).

Both SSDs are shipped in blister packs with the details published on both sides of the pack. The DC450R is by far the better (and professional) looking drive with the full colored logo and further details on the back. The KC600 has a black and white imprint (probably to save costs) and nothing on the back.

Both drives are housed in the standard light-weight metal enclosure that we know so well.

The first test we always run is CrystalDiskMark. This is the easiest test in our portfolio and it quickly establishes a baseline against manufacturer claims. The DC450R and KC600 both achieve the expected 500 MB/s+ read/write performance in sequential loads with almost no significant difference between the two. The DC450R takes a slight lead with the first round of random 4k tasks with the last volley being split between the two devices. Interestingly, even though the DC450R is touted as a read-centric drive, it loses to the KC600 in 4k random reads and wins in writes.

ATTO benchmark is one of the most thorough benchmarks in terms of testing profiles and we see an interesting pattern begin to emerge. The Kingston DC450R consistently underperforms in terms of read performance. That said, it does consistently outperform in write performance - which is a pleasent surprise. 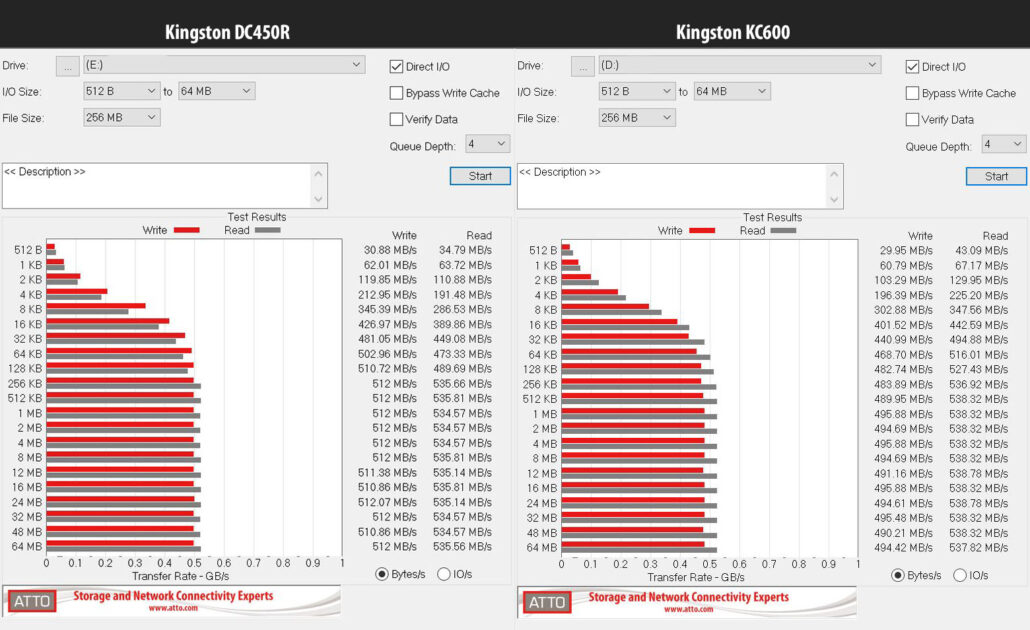 When we get to the IO tests we start to see the reason behind the disparity in performance. The KC600 is almost 17k IO faster than the DC450R on 512 bit (the most IO intensive task) file transfer test. The rest of the IO tests are pretty similar but we see consistently better read results on the KC600. Write performance of both drives is pretty similar with a slight advantage going to the DC450R. 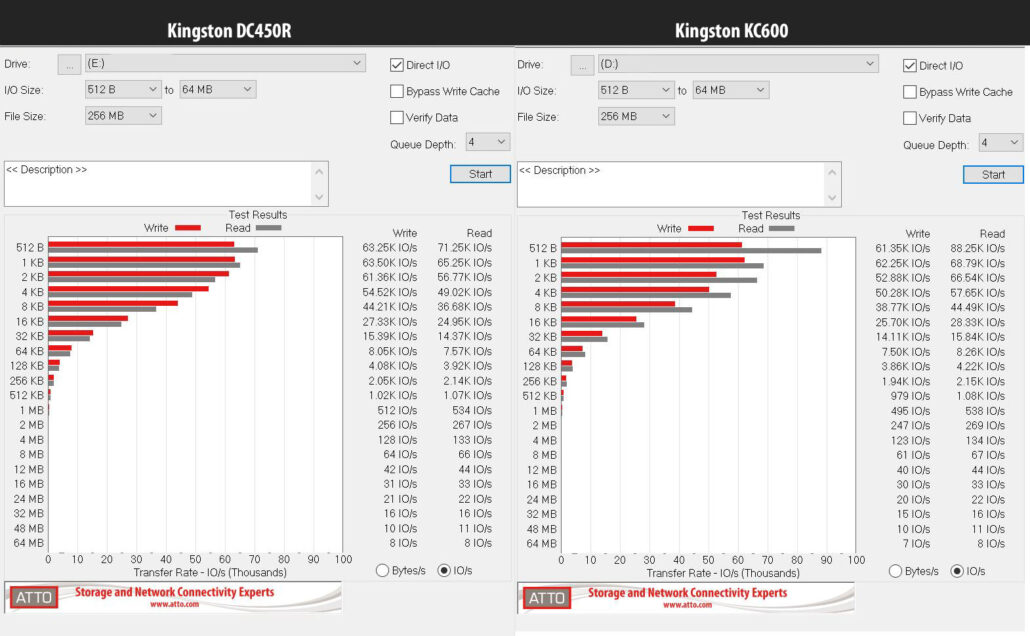 Finally we have one of our most trusted tests. We load the disk drive up to 50% with randomized data and then run a complete sector speed test using HDTune. This shows us not only the health of the TLC NAND but also how it performs. The KC600 exceeds expectations once again with consistently great performance although it has inconcsistent access times. We saw three tiers of access times scattered in the results.

The DC450R on the other hand did not fare well under the load test and had a very inconsistent result with spikes going up to 376 MB/s and the average hovering round 187 MB/s. That said, the access time was extremely tight and consistent across the board. We think the performance inconsistency of the DC450R has to do with the memory controller being used although it still has some features which might appeal to some entry-level data center efforts. The lack of a power capacitor, however, makes this pretty much a normal SSD with a high MTBF.

Both the DC450R and KC600 are designed for a particular market and at the price being offered, both have their own value propositions. That said, we were extremely impressed by our sample of the KC600. It exceeded expectations in every regard, to the point where it made the stable-by-design DC450R look slow in comparison.

If you are a consumer or even an entry-level data-center venture looking for a reliable SSD, you really cannot go wrong with the KC600. Yes, it is rated at 1 million hours of MTBF but remember - both SSDs have 5 year warranties and the memory controller used in the KC600 is more reliable. It is also cheaper and punches above its weight class with excellent load performance and virtually no degradation with load - not to mention you get a few extra GBs worth of storage. For all these reasons, we gave the Kingston KC600 our Editor's Choice Award.

The KC600 represents surprisingly good value and is packed with a ton of features that make it the perfect "affordable" drive for many. The DC450R on the other hand is only recommended for very niche scenarios.