Journey to the Savage Planet

The Metroid Prime franchise is a rare case – a series of successful, critically-acclaimed games that somehow haven’t spawned many direct imitators. Sure, there are plenty of Metroidvania-style titles out there, but they’re mostly inspired by earlier 2D games. Metroid Prime’s unique combination of non-linear level design and first-person platforming has largely gone unreplicated, which makes the ever-receding release of Metroid Prime 4 all the harder to take. Thankfully, Typhoon Studios, a new team founded by Montreal-area devs who used to work for triple-A publishers like Ubisoft, EA, and WB Games, has stepped up to carry the Metroid Prime torch with Journey to the Savage Planet.

Of course, when something successful hasn’t been copied incessantly, there’s often a good reason. The Metroid Prime games were lightning in a bottle, and recapturing their magic is no easy task (Nintendo itself seems to be struggling at it). So, is Journey to the Savage Planet worth exploring? Or will you want to nuke it from orbit? Let’s find out…

Crime Boss: Rockay City Is a Star-Studded Co-Op Crime FPS Due in March for PC, Later for Consoles

Journey to the Savage Planet casts players as an unnamed employee of Kindred Aerospace, the 4th-best interstellar exploration company in the galaxy. You’ve been sent to check out the “uninhabited” planet AR-Y 26, which turns out to be anything but. In addition to a gaggle of strange critters ranging from disgustingly cute to just plain disgusting, it seems an advanced alien civilization once called the planet home. The main evidence of this is a very big, very important-looking tower, which you eventually discover to be occupied by some sort massive (probably unfriendly) living entity. Don’t expect a ton of complexity from Savage Planet’s plot. In true Metroid Prime fashion, you’re alone on a hostile planet with one simple goal you never deviate from -- find out what the heck is going on in that tower. That said, Typhoon Studios enhance this basic plot with plenty of whimsy and little bits of worldbuilding.

Savage Planet’s humor is being sold as its main defining feature -- the game’s trailers focus almost exclusively on comedy -- and for the most part, the funny stuff is pretty tolerable. The live-action commercials that play in your spaceship extolling gag-inducing genetically engineered foods and alien blob sex lines are cute, but do start to grate after you see them for the 10th time. I’ll admit I did enjoy the company of the smart-alecky AI assistant that natters in your ear throughout the game, which is good, because it would have been a game-killer if she was too annoying. Basically, if you can watch this butthole-themed Savage Planet trailer (yes, really) without cringing too hard, you should be able to roll with the game’s humor. Worst case scenario, there’s actually an option to dial down your AI assistant’s chatter, at which point, you can pretty much ignore most of the game’s sassiness.

Oh, and don’t be put off by Savage Planet’s proliferation of buttholes – it’s actually rather nice-looking. Yes, the game has a cartoon art style, but it also delivers some moments of real beauty, like the first time you stumble upon a tree made up entirely of butterflies or climb to a high point and really take a moment to take in the view. Savage Planet serves up a variety of environments, from frozen glaciers to lush, colorful swampland, to floating ruins, all of which are strikingly unique. On the audio front, Savage Planet eschews typical sci-fi sounds in favor of a memorable bluegrass-flavored soundtrack.

As for how Savage Planet plays, well, not to belabor the point, but it’s Metroid Prime. You jump around and explore in first-person and blast baddies with a beam gun, all while steadily upgrading your abilities. First-person platforming is always a tricky prospect, but thankfully, Savage Planet’s surfaces are very “sticky.” You’ll latch onto most platforms as long as you’re at least close, and if I did miss a jump, it very rarely felt like it was an issue with perspective. Most of the time I was just being careless. This might be the best example of first-person platforming I’ve ever come across – yes, even better than Prime.

AR-Y 26 is a wonderfully layered, interconnected world that slowly unfolds as you unlock new capabilities like a rocket pack that allows for double (and eventually triple and quadruple) jumps, a grappling hook, and the ability to handle bombs and other helpful items. In classic Metroid fashion, most of your key abilities are gained by simply finding and absorbing alien tech, but the game also features crafting, collectible alien fruits that will increase your max life and stamina, and various achievement-like challenges that will allow you to “rank up” if you complete enough of them. The wide array of different ways to improve your abilities makes Savage Planet feel a touch less restrictive that your typical Metroidvania, even if the core of the game’s campaign remains fairly straightforward.

At its best, Journey to the Savage Planet really captures that Metroid magic. That excitement of seeing a temping ledge, cave, or cracked wall just out of reach, and then, bit by bit, figuring out how to get there. Unraveling Savage Planet’s secrets almost always feels rewarding, as there’s very little collecting for collecting’s sake. Everything you find has a purpose. Often, I would try to play the disciplined reviewer and set myself hard goals, only to lose hours just happily exploring AR-Y 26 with no specific mission in mind. That’s the measure of a good Metroidvania. As a nice bonus, Savage Planet also includes two-player online co-op. The game’s world isn’t specifically designed around it, so you lose nothing by playing on your own, but it’s always fun to explore with friends.

That said, Savage Planet isn’t without its issues. The most glaring problem is the complete lack of a map. You don’t even get a minimap – a basic radar that shows you which general direction your currently-marked mission objective is in all you get, which often isn’t terribly helpful given AR-Y 26’s twisted layout. The game’s Dark-Souls-inspired elements aren’t particularly well-developed either. I suppose being able to retrieve your crafting supplies after you die is nice, but often they would show up at the wrong place, or as happened to me a couple of times, completely drop off the map. I don’t think Savage Planet would be any poorer off if it cut the roguelike stuff altogether.

Then there’s the game’s bosses, which will likely divide players. Personally, I quite enjoyed them, as they’re big, bad, and complex, but they also serve as steep difficulty spikes. For the most part, Savage Planet is a fairly low-key experience that’s more about exploration than combat, but I guarantee you will die against the game’s bosses. Probably quite a few times. Again, nothing inherently wrong with that, but those hoping this game will be one long chill session may be a bit put off.

Finally, I’d be remiss if I didn’t mention Savage Planet’s general bugginess. During my playthrough I found myself stuck inside enemies, and enemies stuck inside me. As I mentioned, sometimes my loot would disappear and often mission objectives wouldn’t update properly. I never came across anything game-breaking, but I wouldn’t be at all surprised if something like that is hiding in the game. So, maybe back up your save file every so often. Ultimately, I’m willing to cut Savage Planet some slack given its small development team (Typhoon Studios has less than 30 employees) and ambitious scope. This game is every bit as big as any entry in the Metroid Prime series, delivering a solid 10-to-15-hour main quest (depending on how focused you are) and many hours more of collectible hunting. Taming this Savage Planet is no quick or easy task.

This review was based on a PS4 copy of Journey to the Savage Planet provided by publisher 505 Games. 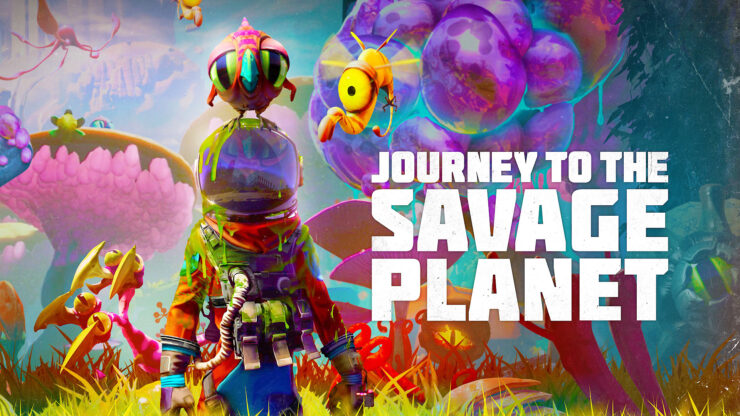 Anybody pining for more Metroid Prime needs to put Journey to the Savage Planet at the top of their list. The game has a few rough edges and its sense of humor might not be to all tastes, but it captures that inviting, adventuresome Metroid spirit better than anything I’ve played in a while. This Savage Planet will pull you into its orbit if you give it half a chance.