I was the first person to wonder if a slow-paced strategic shooter in the vein of XCOM was a good fit for the fast-paced action of the John Wick movies. Having John Wick slowly move through corridors and weave between cover, as opposed to being a fast-paced ass-kicker, shouldn't work. But it works so incredibly well, and John Wick Hex ends up being one of the best movie licensed games I've played in a long time.

John Wick Hex has been developed by Bithell Studios. Mike Bithell and his team made a name for themselves with Thomas Was Alone and Volume, and John Wick Hex is set to be the team's biggest game yet. The game has been realized in this wonderful neon cel-shaded art style, which really pops and makes the environments feel striking, and makes it obvious which parts of the stage are darkened and out of your view. It's a really nice style, one which fits with the storyline which is in place, taking place before John Wick dropped out of the hitman game and had a puppy killed.

The way the team has blended John Wick's choreographed and cathartic violence with this slow and strategic style of gameplay is simple and ingenious. Consider this: John Wick himself is a combat master, capable of tearing people apart whether he is armed or not. The button presses of an average man could never compare to a master of the arts like John Wick - at least, not in real-time. When things are slowed down and taken more methodically however, even I can feel like the kind of skilled martial arts master that John Wick is.

But each action takes time, and that is your key resource in John Wick Hex. As you move, reload, shoot, attack, time is taken away from a meter at the top of the screen. On the meter, you will be able to see exactly how long each action you perform will take, in addition to how long enemy moves will take.

Using this knowledge, you can swiftly and nimbly duck and dive into cover, bait enemies into ambushes, shoot them down, throw your guns at them, and much more. Since you'll essentially always be able to see the moves enemies are using, and how long they all take, a particularly observant player can predict enemy AI perfectly, and will be able to move through stages without taking any damage - that is assuming you stay perfectly aware of where all enemy units are, lines of sight, and more. To perfect the system, the game allows you to witness replays at the end of stages which play out all of your decisions in real-time, unveiling the fast-paced action that John Wick Hex has your carefully choreographing each step of the way. It feels like planning an action scene and then watching it unfold before your eyes.

You will still have to take chances, since depending on your range and situation, you may only have a low chance to land a shot when shooting an enemy, or throwing your gun to stun them, which is shown to you with percentages next to each action. That means if you're playing fast and risky, you may quickly find yourself in an awkward position. If a single enemy spots you and is about to shoot, throwing your gun to stun them so you can move in and perform a takedown sounds like a good idea. And often, it is. But then suddenly a second enemy spots you, and you're left without a weapon to retaliate. Simply put, take too many chances, and you may end up paying for it.

Once you adjust, the way John Wick moves and performs actions feels smooth and natural, but when you first play it's all a bit alien and awkward. You will initially make mistakes before you learn how to master the game's mechanics. Although admittedly, the game can feel frustrating at times. You are likely to find yourself without health and perhaps low on ammo and focus, all while surrounded by enemies. Of course, this is to be avoided, but it might be hard to do so. And that's partially because before you start a level, and the several missions contained within, you'll be asked to spend coins. You can spend them on perks, or spend coins to stash bandages to restore your health in the stages - which you will want to remember to grab.

Your ammo, health, and focus do not restore between stages, and if you haven't purposefully stashed health items and ammo stocks in advance, then you are likely to find yourself running low. Of course, even if you only have a single health segment, you can retry a mission endlessly and can, with proper strategy, overcome it, but doing so can be frustrating, and the only alternative is to play through the entire selection of stages over from the beginning, if you wish to respend your coins on bandages.

That means each level has a decent amount of challenge, especially if you act wastefully on your first few missions. But as mentioned, the frustration does add up, and I can't help but wish there was a way to get an extra bandage without having to replay the missions from the start - as I usually found myself only lacking resources in the last mission or two. But each mission you complete feels incredibly rewarding, and the replays you watch afterward are a much-needed catharsis after getting through a tricky stage. This really is the best movie license game I've played, but not everything is perfect.

My complaints are petty, but they stood out to me. Each level has a music track that loops for each of the missions within, and it gets tiresome. When you complete a stage, an abrupt clear screen just flashes up. It's strange, and a ridiculously petty complaint to make, but it's the stage clear screen of a lower-quality game. To find these odds bits of polish missing is strange when so much of the game is so good. Not to mention, certain objects in the environment are somewhat unclear. A barrel in one stage will allow you to completely hide from enemies while standing, while a barrel in another stage doesn't conceal you even if you are crouching down. When making tough choices, this lack of clarity can be costly. 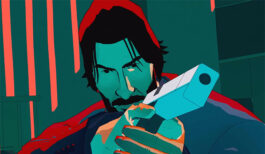 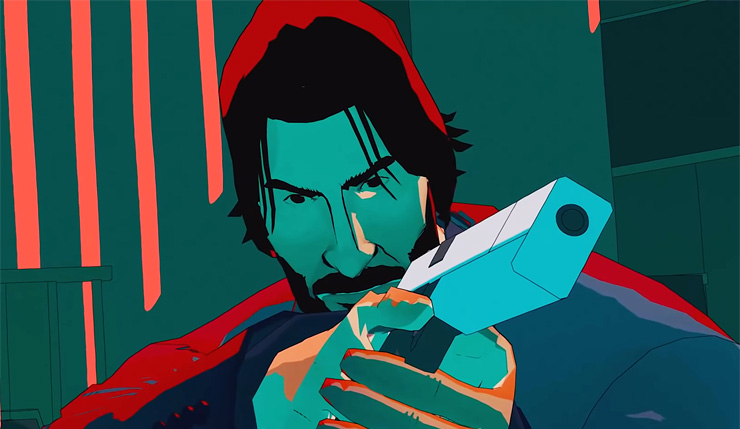 When all is said and done, John Wick Hex is an exceptional licensed game, and a wonderful strategic shooter even away from that. It's the kind of game that's high quality and enjoyable, even if you are clueless about the John Wick movies themselves. The perfect kind of licensed game, that works as well as an introduction to the franchise as it does as an extension of it. Absolutely worth playing.