The world of 1920+, what Iron Harvest is set in, is an interesting one. Set in an alternate timeline, post-World War One, you have a story and world inspired by the oft-forgotten Polish-Soviet war of 1919-20, the one that halted the Bolshevik advance west as the Polish (with Ukrainian support) halted and countered a Soviet advance that reached as far as Warsaw.

This relatively unknown war is surprisingly one of the most important in recent history, stymying the advance of communism in western Europe. In real life, ten years later the Molotov-Ribbentrop pact was signed, and the USSR got some of the gains sought here. Anyway, that's another world, another timeline. Here, you have wafer-thin pseudonyms, a worldwide conspiracy, a cabal looking to rival the Brotherhood of NOD and great hulking mechs. Welcome to the universe of 1920+.

What I don't understand about this universe is how it wants to both be a "what if" in our world, but also wants to be something different. You've got several major names from real-life making an appearance, such as Grigory Rasputin and Nikola Tesla, but the nations are called something different. We have the Rusviets, Saxony and Polania. I hear Russia, Germany and Poland. Simple enough, even if not fully accurate, and you can enjoy the story without the pretense.

I remember, when I previewed Iron Harvest back in March, that I was slightly concerned that a campaign split between three factions could end up feeling quite disjointed, essentially feeling like three mini-campaigns stitched together. I didn't write this fear down in my preview and I'm glad I didn't because my fears have been proven incorrect.

Even though each faction is the feature of a third of the campaign, it all works well, and effort is made to link it all together. Think of each campaign as a shorter story that makes up a part of the whole. Now, some of the links feel a little contrived. For example, the majority of the Rusviet campaign is simply one character telling another what they did up until that point.

Still, I'm going to let it slide because it's engaging and interesting, particularly so when you remember it's a strategy game, a genre rarely known for its storytelling. Iron Harvest certainly draws you into the world. I'd be more than happy to spend more time in 1920+, particularly because I like some of the characters and the arcs they go through. Also, it's early 20th-century warfare with mechs.

Let's face it, the story is a decent addition for a strategy game but not what you're here for. It's all about what Gameplay brings to the party and here, gameplay brings a fair amount of challenge. Even without looking at the bonus objectives in any of the campaign missions, you're going to find later missions an absolute pain in the arse. Now if you want an even bigger challenge because you're the sort of person really into sadomasochism, each level has bonus challenges that are perplexingly not made clear in-mission, but you can check them out in the menu before jumping in.

These are just for personal gratification. Well, they give you increased experience too, which goes into your overall level as well as your level with the respective faction. Again, all of that is really for show, you just getting perks like portraits, banners, and more for your profile for when you start playing online. Speaking of online, the game will feature seasons, tasking you with completing specific challenges like killing so many units with a particular character, building a set number of structures in one of the specific mission types, that sort of thing.

That reminds me, mission types. As well as the campaign, you also have a skirmish mode, online and also specific challenge missions. These are To the Last Man, Hold the Line and Fortress City, each of them having you defend a base, location, or city, respectively, with limited resources. They're difficult enough on medium mode with no modifiers, but you can add modifiers that act as the equivalent to the campaign mission-based challenges.

Before I move on, talking about the campaign. In addition to the story being interesting, and with some compelling characters, the campaign also features a good variety of missions. You've got everything from your traditional build up a base, capture resources and capture areas to others where you have to fight with limited units, ones where you're just controlling the one hero unit, sneaking into an area and avoiding detection, and others that are essentially escort missions. Often, they'll lead from one style to another. It keeps you interested and makes the most of the genre.

It's all good talking about the different mission types and modes you get to play, but what about the actual gameplay? As a real-time strategy game you'd probably expect it to have you building bases or doing set missions in a war-based setting, recruiting or building units to kill your enemies, eventually succeeding in whatever tactical - or personal - objective is right before you. If you do expect that from Iron Harvest, you'd be completely right.

The closest link you can make to another series is Company of Heroes. The number of structures is limited, as are the number and variety of units, but they're all well-balanced thanks to their respective strengths, weaknesses, and costs. Popping out 200 iron for the regular infantry may seem like a bit of a waste of iron, but since infantry units are the only ones that can capture the Iron Mines or Oil Pumps, to gather more resources, they're essential. They're also useful distractions.

Even more useful is that every non-mechanised infantry (some wear exoskeletons) can pick up the weapons of other infantry units, making them very versatile in combat. Make a few MG infantry to wipe out the fleshy soldiers of your enemies, before picking up the anti-tank weapons of an enemy you just mowed down, now you can inflict a decent amount of damage against that lumbering mech heading your way.

These mechs can genuinely feel massive too. Like the infantry, they have their own types, strengths, and weaknesses. One of my favourites is the scout mech (Śmiały) for the Polonians, it's fast, agile and does a reasonable amount of damage. Four of these and you can flank a much stronger opponent. The only issue is that they're pretty damn susceptible to attack. On the other hand, you have the Gulay-Gorod, which would give Metal Gear a run for its money.

When I first played the game, I was worried that they'd struggle to get the balance right and that fear hasn't completely abated. When it comes to the units, I can't honestly think of any way to balance the units better, but I also don't look into everything the same way a champion Starcraft player would, so I could have missed something. The only things that do seem somewhat overpowered are, strangely, bunkers and fences.

You can build a bunker almost anywhere and once fully upgraded to have a cannon inside, which you'll then add a group of MG gunners or flamethrowers to wipe out infantry, you can then just put a wire fence to stop units getting passed and you're going to find it a defensive position worthy of the Maginot line. Mechs can crush the wire, of course, but the AI seems to forget that and the units just sit in front of your bunker helplessly, getting mowed down. It's the only downside to what is an otherwise challenging AI, even on medium difficulty.

Simply put, combat is challenging and well balanced. The units offer a great sense of size and scale, the biggest and strongest ones feeling like superweapons, all of them having reasonable tradeoffs so you're going to have to think tactically. From using cheap and relatively weak infantry to capture areas and slow down enemy attacks to the massive behemoths to slowly trudge towards an enemy, wreaking havoc on the way, there's a lot to think about. This is particularly true while playing multiplayer and honestly, this plays great online. It's also a game that values tactical thinking over clicks-per-minute, though of course the faster you are, the bigger the advantage.

Aesthetically, I'm finding Iron Harvest a mixed bag. I find it strange that in-game, it looks decent enough, though zooming in fully makes the texture work look a little uneven. Still, you're going to be fighting from afar, where rubble, smoke, flames and more are going to be obscuring the battlefield. Fortunately, the use of colour lets the units stand out, never making the game look confusing even in the middle of a heated battle. However, the pre-rendered cinematics look, well, poor. Muted colours and more make them look much worse than the in-engine alternatives. A minor issue, but it just glaringly noticeable.

As for bugs, there are a few that I keep noticing. From enemies that, once killed, stay stationary on the map, showing as alive but not targettable which means you're going to get a few warnings of enemies sighted. I've also had areas where the lighting messed up, some localised constant flashing like somebody unhealthily fond of flash-bangs. There are a few other minor bugs, but nothing that honestly impacts the enjoyment of the game, speaking to the fine work of KING Art Games.

That's the best way to describe Iron Harvest, a piece of fine work. It's got a lot to offer and I'd argue it's clearly one of the best RTS' of its kind since Company of Heroes. The gameplay is engaging, the AI is challenging, the levels and maps all well designed, and it even has a decent enough story to draw you into the world it presents. Do I recommend Iron Harvest? Yeah, I do, more than a little. 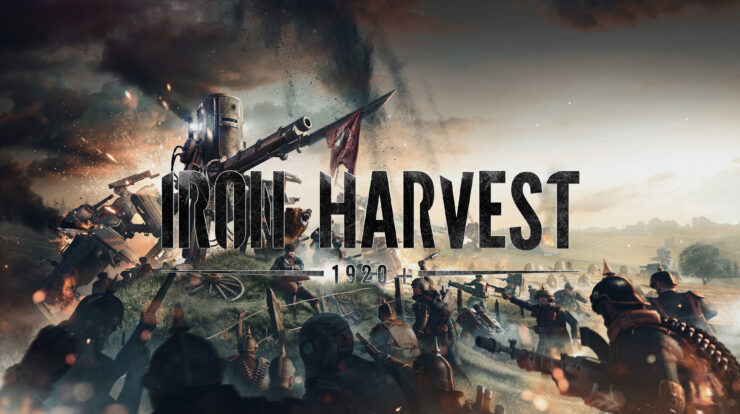 Iron Harvest could be best described as Company of Heroes with Mechs. That's high enough praise in itself and Iron Harvest lives up to it. Featuring great RTS combat across an extensive and engaging, campaign, skirmish levels, challenges, and multiplayer, you'll have a lot to bite into and enjoy. It's well balanced and at a pace which rewards tactical thinking over simple fast gameplay. There are a few slight issues, aesthetically it does feel like more could have been done, but it's still a decent enough looking game. There are also a few very minor bugs here and there, but nothing that can mar your enjoyment. Iron Harvest is a game I heartily recommend for strategy fans, particularly those who like the Company of Heroes style gameplay.

Dead Island 2 to Be Revealed Again Later This Year; Game Is in A “Decent” State of Development – Rumor