The Intel TM105A is an old tablet at the time of testing but it has only been introduced in our country as the first tablet from Intel Pakistan. The tablet is aimed towards budget users and costs around the $150 range which is a decent price against the competition. The Intel TM105A is actually manufactured by ECS (Elite Computer Systems and powered with Intel hardware. Let's take a look at the details!

As an Intel Tablet, it should be no doubt that the hardware it features is also made by Intel itself. Under the hood, the TM105A packs a Atom Z2460 (Medfield) processor which is a Dual core CPU clocked at 1.6 GHz and coupled with the PowerVR SGX 540 series graphics chip.

The 10.1 Inch tablet sports a LED display panel which boasts a resolution of 1280x800 enabled with 5 point multi-touch capability. The 10.1 inch panel is more than enough for any tablet and provides enough room for easy and accessible maneuverability across the screen. Before we go into the details, You can see the specifications listed below:

The tablet is supposed to be a entry level product in the tablet market and Intel went in straight and forward with the packaging keeping it as simple and plain as possible. The box keeps the blue and white theme which represents Intel's product marketing and comes with no additional accessories. 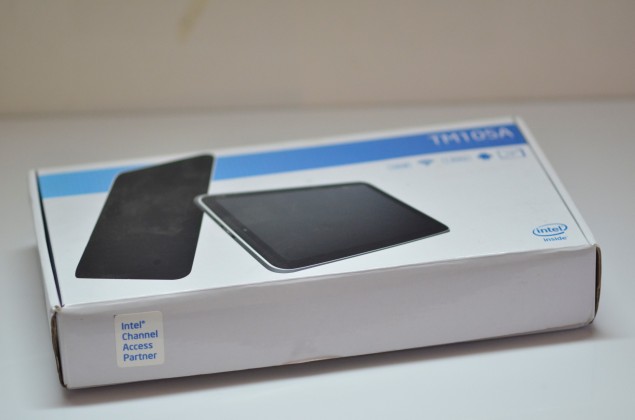 The only stuff the box includes are the tablet itself, a Micro USB cable and a wall socket charger. You can take a look below to see what's inside the package: 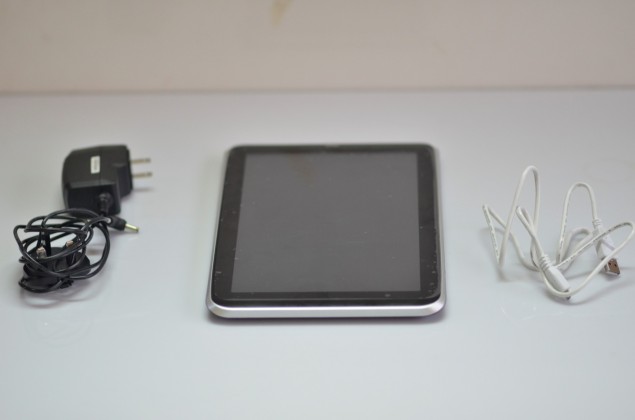 The TM105A has a total weight of 600 grams which is heavier than the Ipad 4 though it cannot be compared against it. The weight however isn't that much of an issue as its design. The large tablet is hard to hold some times although the curved edges help maintain some control but it just isn't enough. 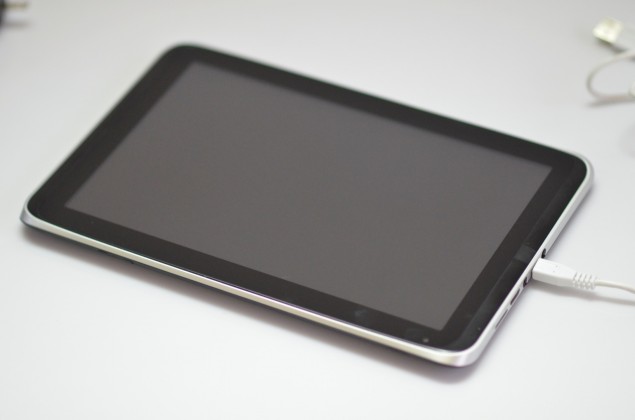 The front is mostly covered with the display which is surrounded by thick black bezels, a metallic silver frame runs through the sides of the tablet. The bottom side has the soft rubber touch feel which is useful while holding the device but it would end up with a lot of finger prints, scratches easily. 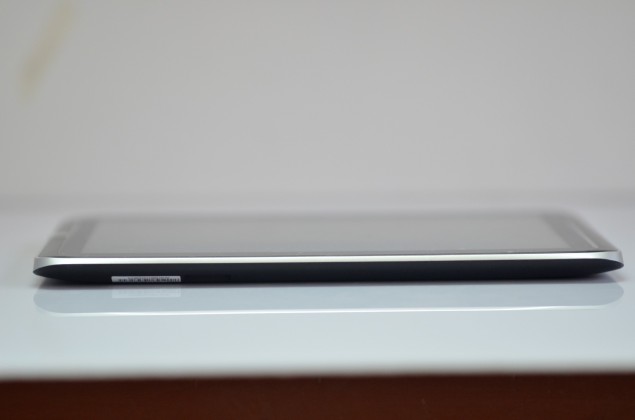 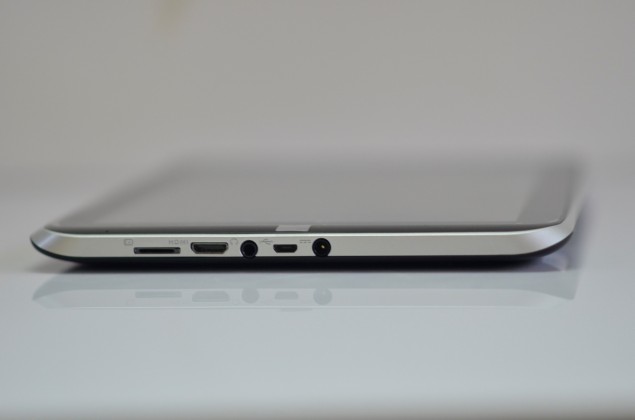 The rest of the input and output ports such as HDMI, Micro-USB, Audio Jack and Micro-SD card slot have been placed on the top and are easily accessible. 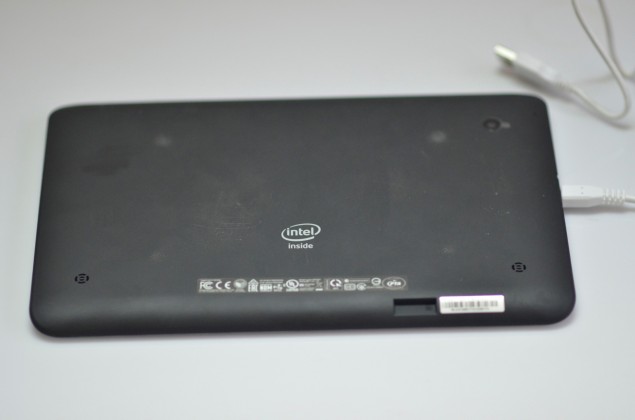 On the rear, there are two speakers which, rather facing towards you, direct the sound towards the people that might be in front of you. The back also sports a rear 2MP camera and unlike many tablets on the market, this variant does not come with any flash.

The 10.1 Inch tablet sports a LED display panel which boasts a resolution of 1280x800 enabled with 5 point multi-touch capability. The 10.1 inch panel is more than enough for any tablet and provides enough room for easy and accessible maneuverability across the screen.

Size wise, this is a 10 inch widescreen LCD with a resolution of 1280 X 800 pixels and 1080p video playback. But there’s a downside to the story as well. You would find any display to be vivid and sharp in color in the case it comes with a high pixel-per-inch (PPI) density. Now normally, all the latest generation tablets on the market have been shipping with a PPI of at least 200+ whereas a tablet of this mammoth size has a mere PPI level below 200 which would seem to be quite a disappointment for those for expecting the VIPER Z10 to be eye candy material.

For where it loses ground, the Z10 makes up with its speed thanks to its Intel Atom powered processor. The Atom Medfield Z2640 chip idles at 600 MHz and goes up to 1600 MHz under normal operation. This is a fare amount of performance for the price you pay for this tablet but is nothing compared to the tablet's that are currently available in the market.

I had ran AnTuTu Benchmark v3.3 on the device with it achieving a score of 10788; that’s faster than an ASUS Transformer Prime AND is a deal breaker when you compare the pricing on both devices.

Gaming performance wise, the PowerVR SGX 540 with the Intel CPU is able to give out quite a decent frame rate maintaining an above average for 40-45FPS per gaming benchmark. At Nenemark, it scored around 29 Average FPS.

The Intel TM105A itself comes stock with 16 GB storage (12 GB usable) which is quite enough for the average tablet user out there OR if you’d like, you can add an additional of up to 48 GB of storage via it’s microSD slot.

Besides that, the Z10 has a 3.5 mm jack, WiFi, Bluetooth 2.0, a mini HDMI out, and a micro USB jack for data transfers or hooking up an OTG cable.

The tablet comes with the stock Android 4.0.4 Ice Cream Sandwich as stock. It runs great and you can install a tons of applications through the Google app store. Though, im used to Jelly Bean on my mobile devices and using ICS again felt like a last generation experience on the mobility front. This however would remain an issue until Intel provides an update.

Besides that, the rom isn’t exactly stable enough as it has a tendency of crashing apps from time to time or force closing them altogether.

In terms of camera quality, there isn’t much to appreciate about it. The quality is just okay and bearable if you plan to Skype with video with a friend or plan to Instagram pictures (with their filters making most of the high image noise seem as art itself). 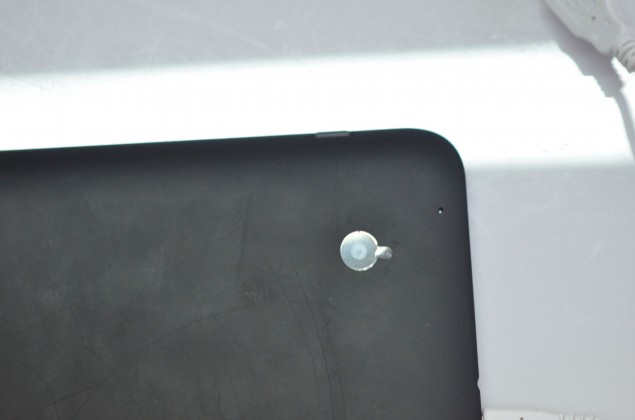 Video recording is at 720P and is mediocre as well whereas the tablet can handle playback of upto 1080p.

The Li-Ion 6600 mAh battery to be exact isn’t any joke when it comes to battery life. On a full charge, I had used the TM105A for my university notes, gaming, web browsing, movie watching and music streaming over WiFi given 1 hour each every day and still had 18% battery left by the end of the week. So roughly, the TM105A has a decent battery life but i was expecting slightly better performance since this equates only 7 hours of usage over WiFi.

The Intel TM105A costs just around $150 in the South Asian market where tablets are yet to become a norm. The price seems fair enough for the hardware although last-gen but still good enough to give the competitors a hard time.

The tablet performs really good for its price but has its fare share of issues which are related with the older Android Ice Cream Sandwich operating system. Most of the applications now available on Google Play Store either won't work or are incompatible with the older OS version. And we aren't sure whether Intel will ever update the tablet to the Jellybean version.

Secondly, the display isn't sharp and the camera quality fails to impress. This is also backed by the fact that Intel sends no additional accessories in the package.

However, the Intel TM105A proves to be a worth-while tablet experience for those looking for large screen PC devices which pack just enough performance to get their work done such as watching movies, surfing the web or playing the casual games on android.