PC Mark 7 comes from the same people who make 3D Mark. Rather than testing 3D graphics subsystem, PC Mark is a jack of all benchmark focusing on day to day computational tasks.

All the minnows are pretty much bunched up together. The Core i3-530 leads the turtle race but they are all in the bottom half of performance table

There is more separation here. The new Pentium is faster than the old Pentium. The Core i3-530 leads the pack.

Some might argue against using 7-zip’s compression and decompression benchmark as a ‘real world’ test. But if you try and think about it for a minute, the benchmark does show how fast the program will either compress or decompress, while negating the impact of disk transfers. The chart below shows the total score achieved. 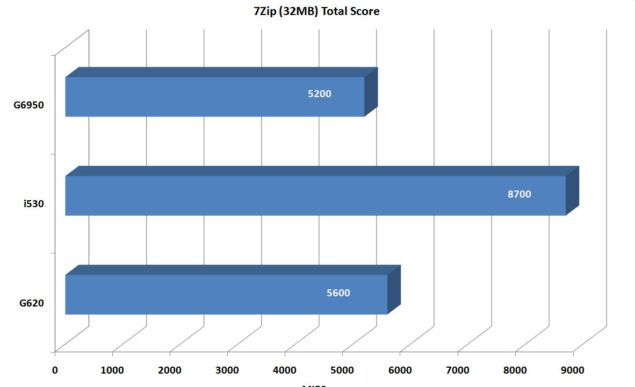 The i3 530 is clearly in the lead while the Pentiums follow their hierarchy (the new is better than the old!)

Both gaming tests show that the i3 530 performs better than the two Pentium offerings.