Intel DZ77GA-70K. Hmm. Sounds more of a title for military hardware rather than a motherboard! This ladies and gentlemen is the first Intel board that has a full GUI based EFI interface. Intel has come rather late to the party, but it has made a rather bold entrance. The 7 series boards are old news; released before its companion the 22nm refresh of Intel’ 2nd generation core architecture. Thus rather than boring you with a preamble into the qualities and goodness of either we will jump to the review proper!

Remember the Z68? If you don’t you, can refresh your memory by reading our review of Asus’s Z68 offerings here (insert Asus Z68 deluxe link here). Think of Z77 as Z68 plus integrated USB 3.- support, support for PCI-e 3.0 (if you have the latest Intel CPU), Lucid MVP (depends on OEM; if they have paid Lucid requisite license fee they can include Lucid middleware to enable MVP), support for up to 3 simultaneous displays from the integrated GPU (again the board manufacturer must include the requisite outputs). Throw in support for Intel’s thunderbolt and higher speed memory and you have the Z77.

That makes a handful of upgrades, but if you look at them closely, none of them are must have features. PCI-e 3.0 extra bandwidth offers next to nothing in single or dual GPU configurations and is more of a CPU feature than the PCH. USB 3.0 offerings have been available by employing third party controllers. Higher speed memory offers minimal tangible real life gains and again requires the presence of the new Ivy bridge processor in the socket (otherwise you will be restricted to 1333MHz support officially). That leaves thunderbolt. The actual hardware is still an optional extra. Finally Lucid MVP, while looking good on paper again has questionable real world potential and can be qualified for use on 6 series boards as well (now is the time to cry heretic!). The figure below is the official Intel diagram to show the Z77 PCH.

The traditional Intel ‘Skull’ logo is ever so prominently displayed on the box on a black background. Rather than flashing text on the box, Intel neatly lists what the board can do for you on the bottom left hand side.

Apart from the mandatory board, back plate, disk and large foldout color coded map, you also get an external Bluetooth module, a Wifi module with antenna and a USB 3.0 front panel box as most chassis of yester years do not ship with USB 3.0 ports.

The board (again) has a black PCB (yawn) with blue and black colored components (double yawn). Boring, boring, boring; the contagious spread of black and blues amongst motherboard manufacturers is getting really old really fast.

The 24 pin power connector is in its usual place, flanked on the side by power and reset switches. Not the best place on the board for placement of these switches (the lower left edge is the easiest to access), but they are there for you. Continuing along the front edge (a break from my traditional style of reviewing boards; lest I get boring as well!), we have the SATA ports -4 SATA 6 Gbps (grey and blue) & 4 SATA 3 Gbps; extra SATA 6 ports are powered by a Marvell controller. The LED diagnostic display completes the tour of the front of the board.

There are four 4pin PWM fan connectors on the board; 3 around the CPU area, one at the rear left edge of the board (looking from the front).

The Z77 PCH lies under a low profile ‘skull capped’ heatsink which should not interfere with long GPUs. Right behind the PCH is a PLX chip which provides extra PCI-e 3.0 lanes to power the second x16 PCI-e connector (electrical x8).

The board features two PCI-e 3.0 x16 slots one at full and other at half speed (i.e. X16 and X8 electrical). It also offers a single x4 PCI-e 2.0 port as well as 2 PCI-e x1 connectors as two conventional PCI ports. One of the x1 slots will be occupied by the bundled Wifi adapter.

The left edge of the board features front panel, USB 2.0 (6) and USB 3.0 (4) headers, as well as headers for audio and IEEE 1394. Right next to the PCI-e x4 slot are the set of diagnostic LEDs. This is the best place for these as it is the most visible area if your case has a window. They will tell you, at a glance, the health status of various onboard components. The HDD LED blinks to show activity and is blue in color.

Apart from the rather odd positions of the power and reset switch the board features a rather user-friendly layout. The diagnostic LEDs are easily visible (if you case has a window). All the headers are neatly organized on the left edge. What Intel could definitely do is include some form of “Q”-connectors to make the life of end user easy. Icing on the cake would be if Intel coud form a ‘standard’ for all motherboard manufacturers to follow so that when one switches board, one does not have to fiddle with teeny frontal panel connectors.

One of the high-lights of the board is the inclusion of a GUI EFI. Intel calls this the ‘Visual BIOS’ and though Intel was one of the last manufacturer to bid adieu to the text based BIOS (Gigabyte comes to mind), its entry is right up there with the best (at-least in terms of what is displayed on-screen).

The home screen offers the basic board, processor, system and chassis info. While this is not the best home screen it does offer quiet a lot of useful information. Intel could add temperature information to improve the home screen experience while removing chassis and system info as most end-users will find these tabs least useful (and empty) most of the times. 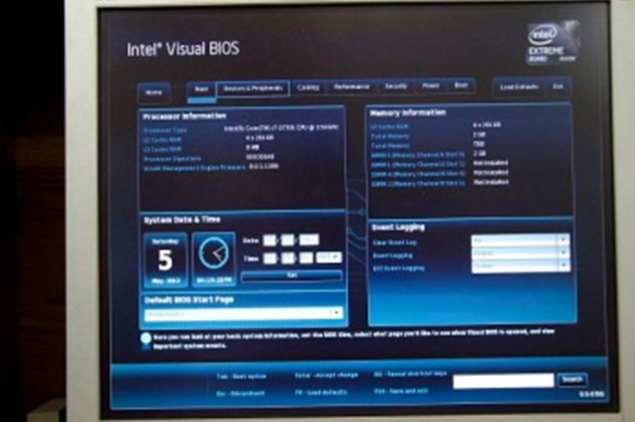 The main screen lists processor (clocks, cache, ME and signature), memory (Cache, onboard), event logger and system time and date. Again not the greatest main screen but a step in the right direction. 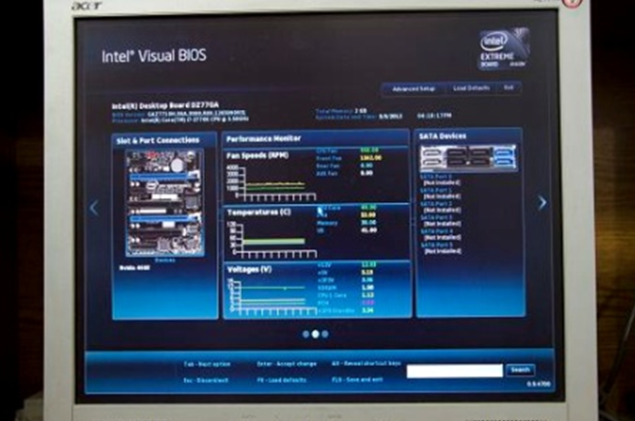 The devices and peripherals screen is divided into 3 sections; USB, SATA and Graphics & Others.  The first two are self-explanatory, while the third offers control over integrated GPU functions as well as other peripherals on the board (LAN, Audio, IEEE 1394).

The performance screen is where all the over-clocking controls are located.

The summary screen shows the processor, memory and integrated GPU clocks, voltages as ‘proposed’ (what has been set), ‘active’ (what is achieved) and default (default setting). This is true for all settings shown here. While this is useful information, it is very different from other EFI implementation and do feel a little alien and confusing at first.

The processor tab of performance settings allow for a simple slider control of processor speed (think of this as idiot over-clocking), while the panel above the slider and the right panel allow for an in-depth control. When using the slider the CPU parameters are automatically setup by the board.

The EFI is definitely an improvement over the drab BIOS that Intel has produced in the past. In fact it seems as if for once Intel has really put some thought into design of the UI as it is actually very easy to work with. Some of the performance screens are still typical ‘Intel’, but once you get to know the ropes, even those are not that hard to figure out. 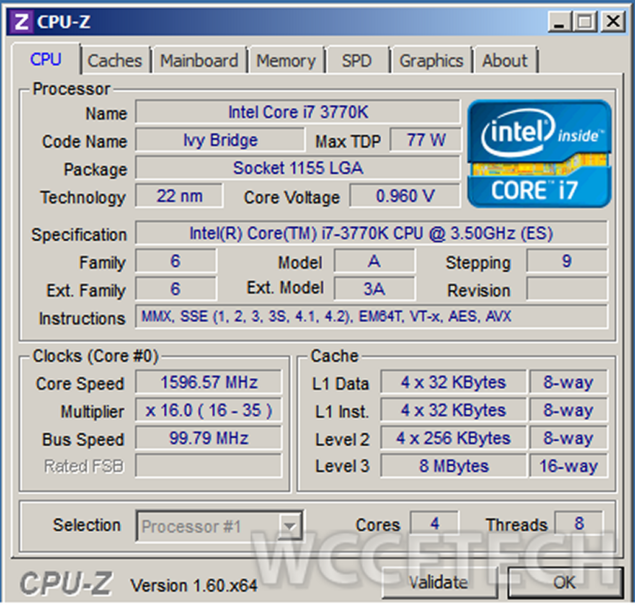 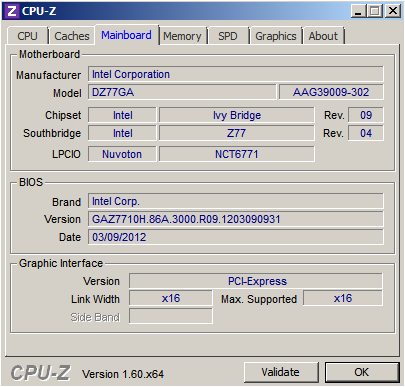 We could achieve 4.5GHz with relative ease. Any higher and the board would simply balk. We tried higher voltages, different memory types, but try as we might 4.5GHz was the highest stable over-clock we could get. We know our processor could do better (as it did on board from ASRock), so the limiting factor was the board. 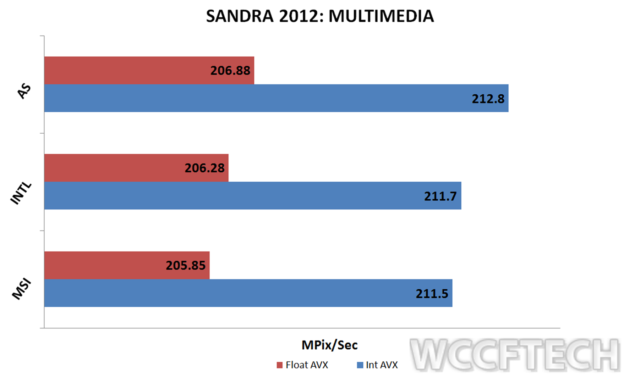 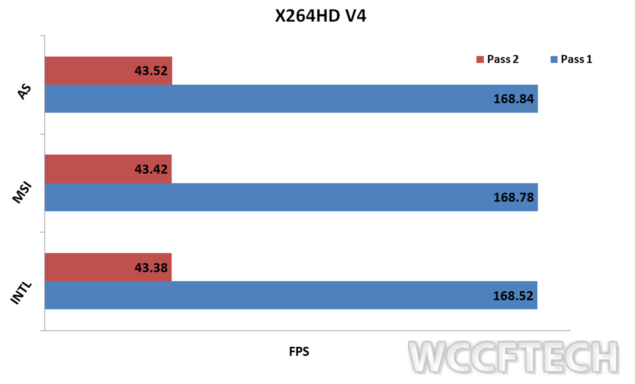 Try as you might, you will not be able to tell the boards apart if we were to remove the legend! The CPU determines performance. 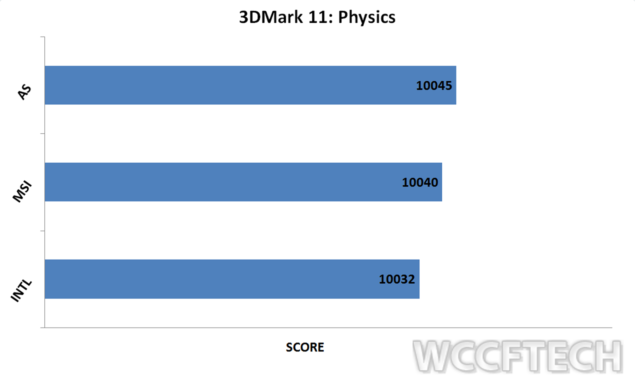 Yawn…. They are (nearly) all the same. 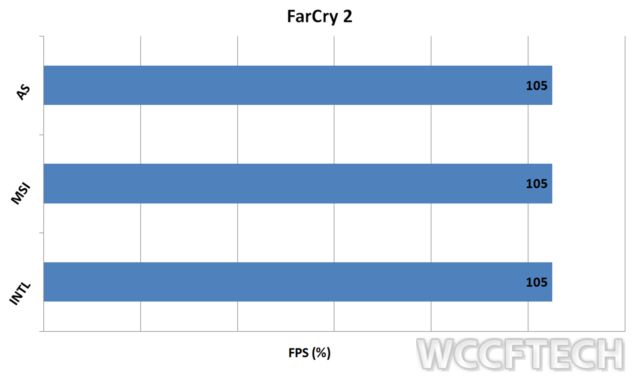 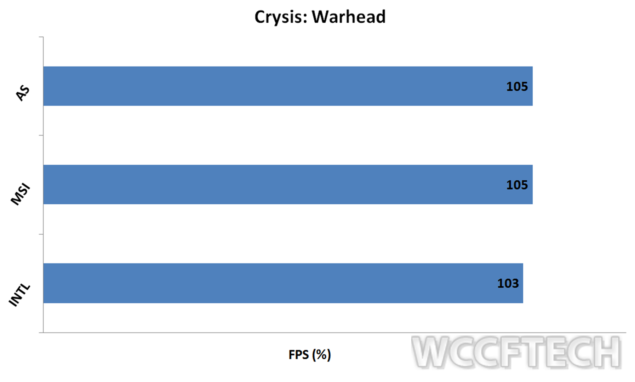 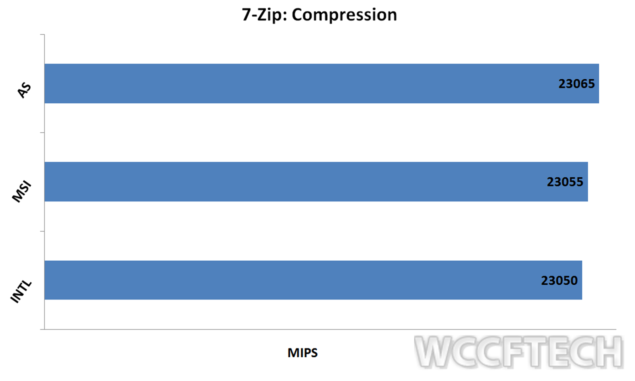 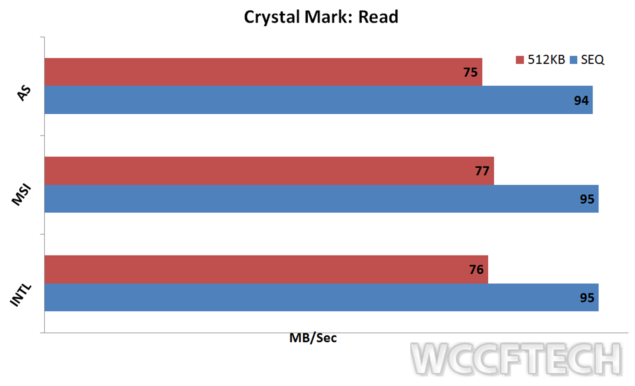 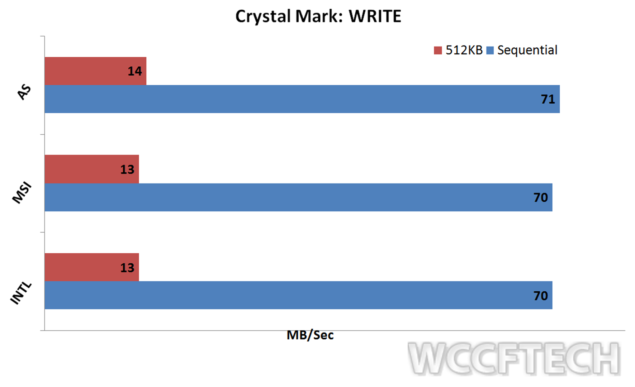 As you can it is difficult to base purchase decisions on results of benchmarks alone. What will help you decide are features that the board has and you might have use for and maybe the over-clocking potential. The Intel board comes with enough goodies (USB 3.0 front panel box, Wifi adapter, Blue tooth module) and features (2 PCI-e 3.0 slots; LEDs; onboard buttons; 8 USB 3.0 ports; dual gigabit LAN, visual bios) to be considered a viable purchase option. However it is not the best over-clocker available (maybe a restriction of our preview board?). But deciding a motherboard purchase on over-clocking alone is not the wisest thing to do.

One thing that I would like to add is that this board was stable throughout the tests, both at stock and over-clock. We did not have one single crash which is something I have come not to expect out of enthusiast class Intel boards in their review-sampling stage.