Immortals Fenyx Rising may not be among the most original open-world games released in recent years, but it is a solid offering that can provide a few hours of fun thanks to its inventive puzzles, solid combat, and a story that never takes itself too seriously.

Fenyx's story has been moved forward, albeit only slightly, by the first DLC expansion, A New God. The expansion did not offer anything substantially different over the main campaign and showed how the formula needed a good shakeup to become exciting again. On paper, the second DLC expansion, Myths of the Eastern Realm, had the potential to make the open-world formula created by Ubisoft Quebec feel fun and exciting again, but this is sadly not the case, as the expansion basically retreads old ground, and without some of the features that made the main campaign enjoyable.

Immortals Fenyx Rising - Myths of the Eastern Realm brings players to ancient China, featuring characters and events inspired by Chinese mythology. Awakening as the warrior Kun, players will have to help the Goddess Nuwa heal the Rift that has appeared in the sky, restore Heaven to its former glory, and battle the forces of Chaos. Right from the get-go, the feel of being there, done that already is extremely strong: this whole setup is pretty much identical to that of the main campaign.

Things do not get much better as the campaign proceeds. Once again, players will be sent all over the new map to meet a colorful cast of characters and complete some tasks that will prepare Ku for his final confrontation. Which could have been enough if it weren't for the writing.

The main campaign was far from memorable, but the hilarious banter between Zeus and Prometheus and the gods' over-the-top nature made everything quite enjoyable. None of it is present in the new campaign: the main character's guide, the Goddess Nuwa, is not a particularly interesting character, and so are all the others Ku meets during the adventure. Jokes are few and far between, and they are not particularly funny either. Ku himself is a more restrained version of Fenyx that ends up being way less interesting than the Greek hero. It's a shame that the writing is so weak, as the setting was exciting on paper and had a lot of potential. 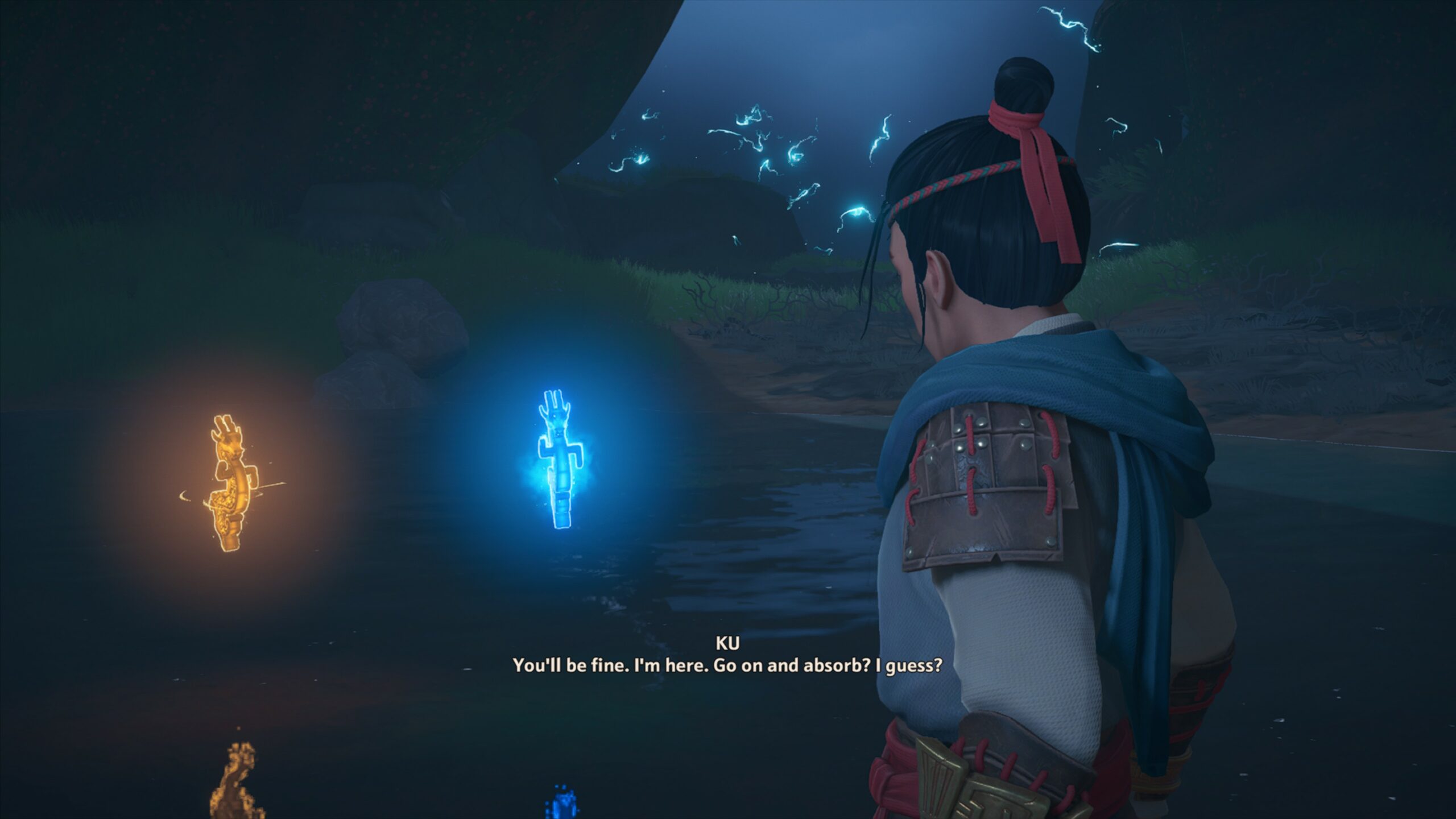 While definitely disappointing, the mediocre story and characters wouldn't have been much of a problem if the campaign featured new gameplay mechanics or major tweaks to the formula. Unfortunately, this is not the case, as Myths of the Eastern Realm plays exactly like the main campaign, not counting some very light changes to combat and new puzzle mechanics.

To be completely honest, the campaign even feels worse than the main one, despite sharing pretty much the same formula, due to a few reasons. For starters, the sense of discovery that drove the players to complete the Vaults of Tartaros or explore the entire map is almost entirely gone, as Ku not only starts with a decent amount of Health and Stamina, but he also comes with all abilities already learned and maxed out. Making matters worse is the fact that he plays exactly like Fenyx, not counting some new versions of the Ares' Wrath and Hephaistos' Hammer Godly Powers that feature some additional effects that can be powered up by spending Jade Coins via the God Seal of Huang Di and God Seal of Yan Di. The effectiveness of these two Godly Powers is also influenced by another new mechanic that tweaks the regular combo counter: the longer the combo goes, the more powerful these new effects will be.

These new effects, however, do not make much of a difference in combat. Most of the enemies you will encounter in the Myths of the Eastern Realm are pretty much a reskinned version of the main campaign enemies, so the same old strategies will continue to be effective. There are a few new bosses, but they do not stray all that far from the main campaign bosses' design. 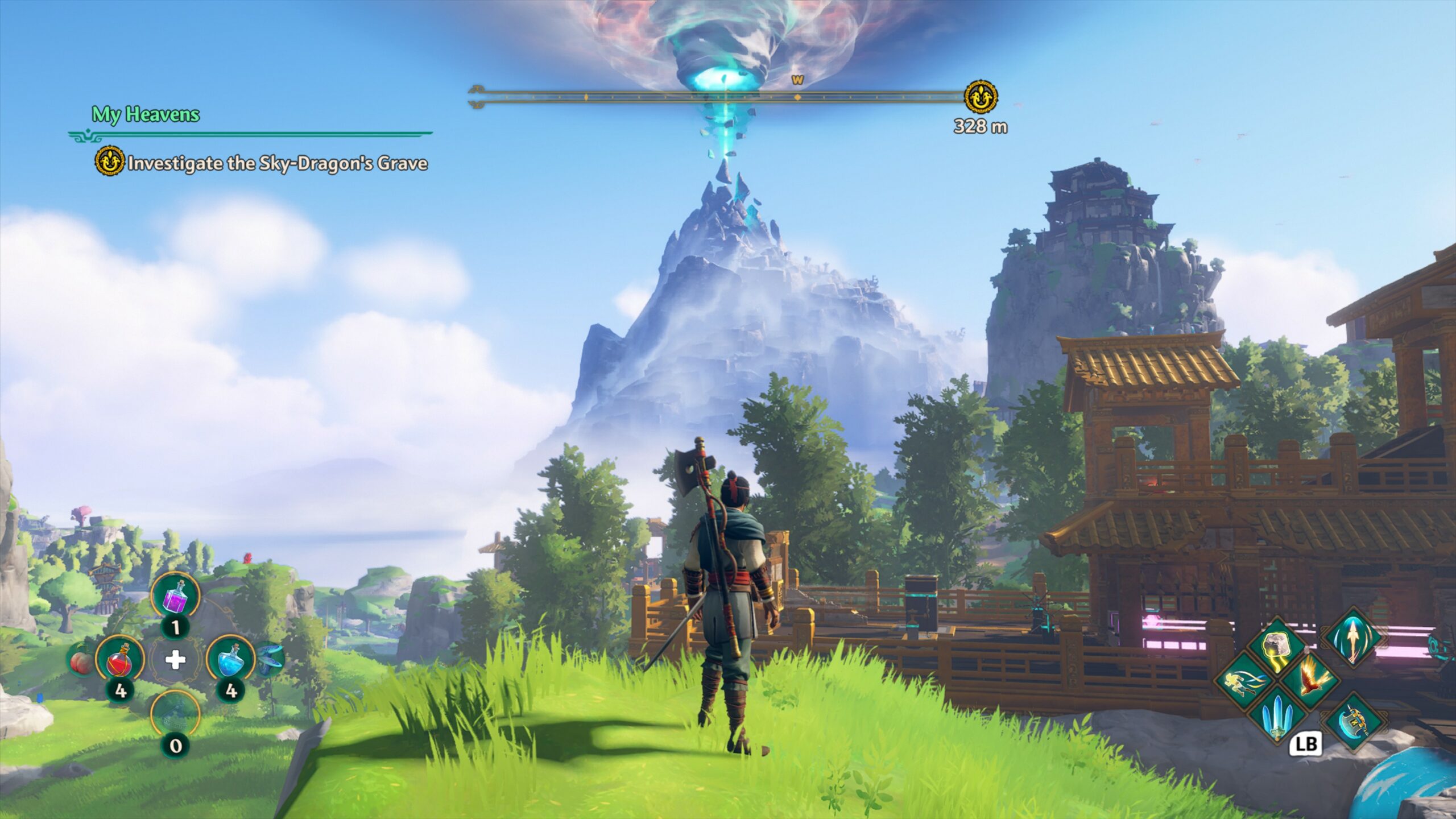 Having taken away the excitement that came with unlocking new abilities to play with, exploring the new map, and completing the new types of challenges mostly feels like a chore. The new weapons and equipment work pretty much in the same way the ones in the main campaign ones do, and the fact that the player should have mastered combat at this point makes the passive effects pretty much pointless. The new map design definitely doesn't help as well: it is basically a smaller rehash of the main campaign map, with only a few distinct locations making it possible to tell the two apart. The theme-park-like design seen in the main game is also nowhere to be seen.

Like combat, puzzles haven't seen any significant change. There are some new mechanics that involve controlling the wind to activate switches, riding clouds, and Morph Blocks, a new type of block whose size can be changed by hitting them. Those who loved completing the puzzles in the main campaign and first DLC will surely love the new mechanics, even though the game doesn't provide any real incentive in completing the optional ones found in the Ruins of Heavens, the Eastern Realms'  version of the Vaults of Tartaros.

Having liked Immortals Fenyx Rising quite a bit last year, I was eager to see what Ubisoft Chengdu came up with to spice up the formula in Myths of the Eastern Realm, so I was quite disappointed to see how very little actually changed. The experience is still solid enough, no doubt about it, but the small changes are not enough to make the new campaign a must-have for most players. Only those who truly loved Immortals Fenyx Rising and haven't had enough of its formula will love Myths of the Eastern Realm as well.

With its ancient China setting, Immortals Fenyx Rising: Myths of the Eastern Realm could have expanded the main game's experience in a lot of meaningful ways, but Ubisoft Chengdu preferred to play it safe, presenting an expansion that expands very little. Lacking the good writing and the hilarious characters of the main campaign, not to mention any major gameplay change, this DLC expansion is a worthwhile purchase only for those who haven't had enough of the puzzle-solving seen in Fenyx's adventure. Everyone else will find this adventure in the Eastern Realm a little stale.