Ivory: a natural substance that drives innovation and is held up as the lifeblood by a nearly fanatical religious sect. Taking up the groundwork of an unfinished sidescroller by the name of Ivory Springs, this source of energy is what drives a world where citizens live in ever fear of penance and divine retribution. Robin’s adventure in Iconoclasts is an undertaking nearly nine years in the making and the PlayStation 4 debut for developer konjak is something I’ve personally been anticipating for quite some time.

As a spunky young mechanic named Robin, her biggest crime is that of pursuing an illegal hobby in One Concern’s eyes: being a mechanic. Crimes in the church’s eyes are routinely metered out with a common punishment: penance. To repent for ones’ cardinal sins, sinners are ordered to return to their homes and await judgment that often comes in the form of retribution raining down from the cracked moon in the sky. That pursuit of passion for being a mechanic will lead Robin all across the two-dimensional world and explore some of the deeper rifts that are brooding within the One Concern.

There’s not a single pixel in Iconoclasts that doesn’t showcase the blood, sweat, and ivory that konjak has spent the better part of a decade perfecting. Every little-nuanced expression of Robin, from her idle animations to the muted expressions in one-sided conversations, has such a flow that goes far above and beyond what pixel art settles for in the modern age. I’m often reminded of Paul Robertson’s bouncy art, albeit with far less grotesque body explosions and creepy bits (of which there are some pretty prominent moments in Iconoclasts that reach this level of disgusting). 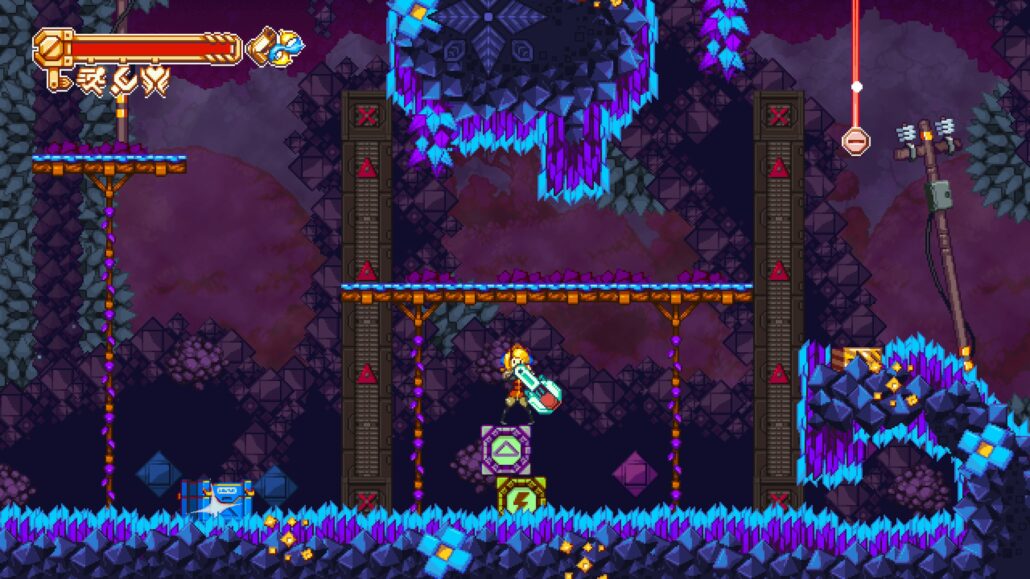 Robin’s stun gun is fully equipped for four-way directional shooting and each of her various subweapons can be used for more than just incapacitating enemies. Every weapon serves a secondary purpose for traversing the Metrovania-esque landscape and uncovering the hidden secrets within. Typically through the secondary, charged firing modes on each weapon, these can be used to blast away specially colored boulders and bypass whatever obstacles are in Robin’s way. It wasn’t until more than halfway through Iconoclasts that I figured out that the charged shot on Robin’s initial stun gun could be fired downwards as a sort of double jump which helped to get that tiny edge up onto ledges that were just out of reach (and something I’m sure will be taken advantage of for the speedrunning community). Robin’s wrench also features a similar

More often than not, the secrets of Iconoclasts are right in front of the players’ eyes, often just a few pixels out of reach or locked behind electrical contraptions. Every screen that the player’s come across leaves a mark on the minimap as a constant reminder to the player that there’s plenty more for Robin to uncover (as well as a percentage rank for tweaks uncovered in each region). Even with shooting at every suspicious wall section or bombing most sections of floor space, I barely broke 60% item completion during my first playthrough of Iconoclasts. Thankfully, konjak was kind enough to include an option to keep playing with all of Robin’s upgrades and continue searching the world and completing sidequests that I had missed the first time around.

Most of the side quests in Iconoclasts are centered around being a courier and not just a simple mechanic, delivering goods and letters to specific citizens around the world. Having a tracker of who I’m supposed to talk to would’ve been a nice touch, as it wasn’t until unlocking a certain method of fast travel that I bothered playing matchmaker and delivering letters back and forth between a couple that couldn’t have picked places farther apart from one another. Of course, the rewards were nice, being a unique tweak for Robin, but that was only one of the first quests I was able to complete and there was a number more to track down within the world. An entire little zone was left out of reach without the Breathless tweak that would allow Robin to breathe underwater for longer, so I know there’s still plenty more hidden in the land of Ivory. 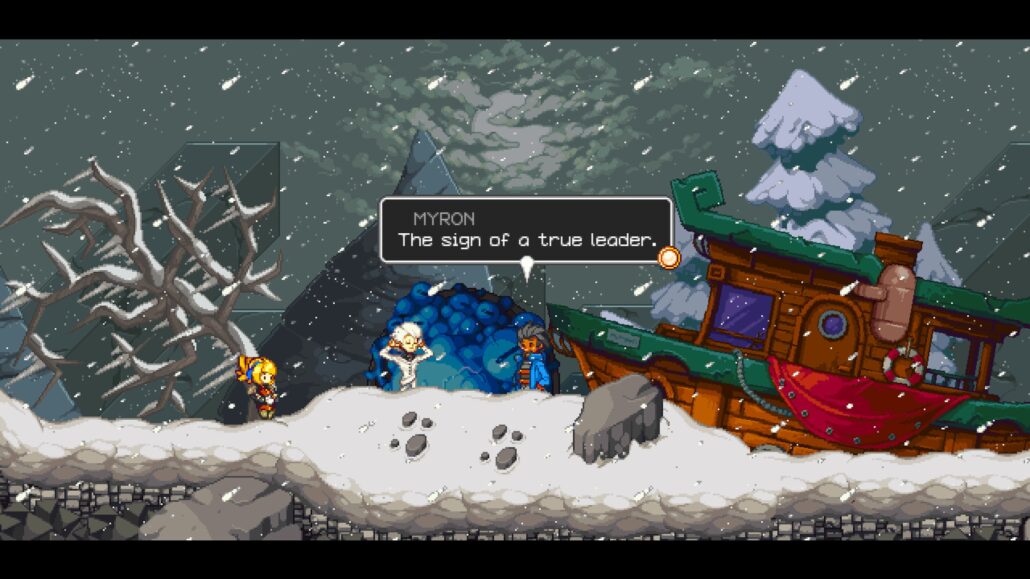 If I had anything negative to speak about Iconoclasts, it would be feeling punished for using Robin’s charged shots in combat. Missing a shot with her stun gun takes more than a few seconds to recharge, all the while I’m left dashing about to try and wait for that bar to refill. Iconoclasts feels built for swapping Robin’s weapons around to counter that, but I’ve grown rather fond of her basic stun gun for most every encounter, save for the ones that need something a bit more explosive.

My first playthrough of Iconoclasts clocked in at somewhere just under eighteen hours and I found much of the time to be enjoyable when not blindly rummaging around trying to figure out just how to reach the next objective that konjak is leading me towards. While not every boss fight was rewarding on their own, the ones that worked better for the run and gun gameplay were the fights that require quick reflexes and proper dodging and not trying to solve a puzzle mid-fight. 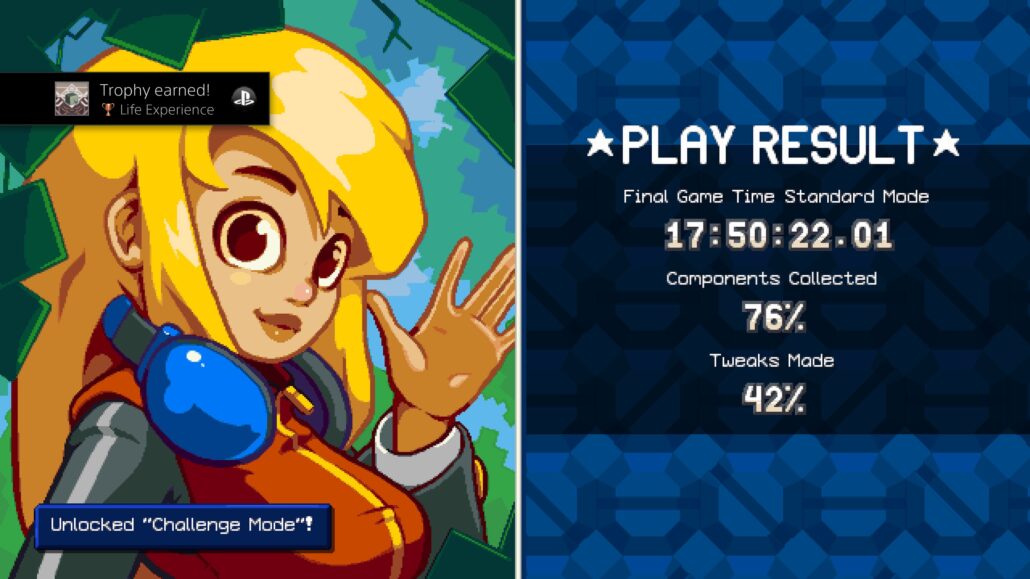 Indie-developed sidescrollers have become a genre that’s become more and more saturated in recent years and it takes something extraordinary to stand out from the rest. Iconoclasts is one of those rare examples and shows that innovation can still strike a genre that’s sometimes stumbling over its own identity. If you enjoy scouring the four corners of the world map for secrets and want to save the world with a giant wrench in hand, Iconoclasts is a shining achievement for the genre.

Iconoclasts takes the Metrovania genre to a new level of polish and charm, with plenty of secrets and a story that's surprisingly refreshing for the genre. It may not reinvent the wheel but rather shows that there's still plenty that can be uncovered when you apply seven years worth of polish to the sidescrolling standard.