I Was a Teenage Exocolonist

Have you ever wished you could relive your teen years? Yeah, I know, me either. Although, what if you got to do it on a distant planet, surrounded by trippy landscapes, weird-ass aliens, and genetically-altered classmates? What if you had real control over how you grow up and an endless supply of lives to get it right? That’s the pitch for I Was a Teenage Exocolonist, a unique mashup from Canadian indie developer Northway Games that combines elements of anime-flavored social sims and collectible card games.

It’s an interesting premise, but is this a galaxy you’ll actually want to spend time in? Is I Was a Teenage Exocolonist a compelling coming-of-age story or about as fun as navigating your old high school lunch room? Time to dish on this teen drama…

I Was a Teenage Exocolonist initially casts players as 10-year-old passenger aboard the colony ship Stratospheric, which has just arrived at a new planet Vertumna IV after a rather rough trip through a wormhole. Your people form the first human colony on another planet, but there isn’t much time for back-slapping and victory marches. Aliens threaten your colony and your parents are under particularly intense pressure as they’re in charge of the hydroponic gardens, which were damaged in the voyage. Thankfully, you don’t have to worry about all that too much… at least not at first.

The game doesn’t give you any real control over what your character looks like beyond choosing your gender, although you can decide on a handful of variables, such as your best friend and main genetic modification. That said, while everyone who plays Teenage Exocolonist will look more-or-less the same, once you get into the game proper, you’re given a lot of freedom to roleplay your character as you see fit.

I Was a Teenage Exocolonist clearly takes inspiration from anime social sims like Princess Maker, with the game taking place over 10 years, each of which is divided into 13 months. During each of these months, you can talk to other characters which may lead to branching conversations or small sidequests, but your main objective is to take on various tasks which will boost one or more of your 15 different stats and progress time to the next month once completed.

There are a wide variety of things to do, with most of them falling under five broad headings – education, food production, military service, administration, and recreation. On any given month you can study robotics, work the kitchens, pull guard duty, or polish up your sportsball skills (yes, it’s actually called sportsball). Eventually, you’ll even be able to leave the colony and go on sometimes-treacherous expeditions. There are 25 “jobs” in all, which are unlocked depending on your strengths and story choices. Not only are there a lot of jobs, the game keeps them lively with a variety of different scenarios. Doing something like working in the colony’s store will rarely be the same twice. One day you may face a moral quandary when you discover your friend illegally replicating items on the side, the next you may have to deal with somebody trying to discreetly buy fart medicine. All the jobs are like this, with Teenage Exocolonist’s devs promising over 800 individual story events.

At this point, you’re perhaps wondering where I Was a Teenage Exocolonist’s cards come in. A significant portion of the game’s story events will reward you with a Magic-the-Gathering-style virtual card, with your deck steadily growing as the in-game years pass. These cards are in turn used for basically all tasks in the game. Whether you’re defending yourself from an alien or competing in a talent show, success or failure depends on completing a card challenge. The rules are fairly simple – you have a score to achieve and a randomly-selected hand of cards from your deck you can play. Each card has a point value and you get bonus points for combinations of the same number, flushes, and straights. Some cards also have other special effects. Hit the target score and you “win” at whatever you were trying to do.

The card system is easy to learn, with some room for strategy and mastery. It provides enough challenge to make Teenage Exocolonist feel like more than a straight visual novel and the constant flow of new cards provides an engaging incentive to tackle as many story events as possible. I can imagine the system might start to feel repetitive if you were to replay the game multiple times, but developer Northway Games wisely give players the option to either jack up the difficulty on card challenges or drop them entirely, depending on your taste. Overall, Teenage Exocolonist is a very structurally solid game, offering a ton of control over your character and a smartly-designed card system brought to life by simple, yet expressive 2D visuals. That said, this sound foundation wouldn’t mean much if the game’s writing and worldbuilding wasn’t up to par. Thankfully, it is.

I Was a Teenage Exocolonist’s characters a fully fleshed out, developing and changing in sometimes unexpected ways based on their own well-defined personalities and your decisions. My character’s main crush and eventual romantic interest, Marz (yes, there is dating in the game) eventually transformed from a bit of a self-centered mean girl stereotype to perhaps the colony’s best advocate. My other best friend Annie began as a wild-eye ragamuffin only to become a no-nonsense soldier.

Some interesting issues and contradictions also bubble beneath the surface of the colony itself. Teenage Exocolonist’s devs wear their politics on their sleeve, which is fair, and their vision of the future is a fascinating and plausible one. At first, I was afraid issues may be handled a bit heavy-handedly, but the game is willing to interrogate its world and characters. At first the society of Vertumna IV seems egalitarian to an almost parodic degree, but fairly early on you discover the colonists were actually part of a cult of sorts that practiced forced cultural assimilation and eugenics and escaped Earth as fugitives. One of the game’s early civics classes is a multi-page dissertation on why capitalism is the root of all evil, but in my first playthrough, Marz, the most materialistic character in the game, was the colony’s greatest visionary. So yeah, there are some interesting things going on here, and you’re largely free to chart your own course. I would wager most of the folks who worked on this game aren’t in favor of exploiting the environment, but if you want to be Cyril Sneer, you can if you want.

Ultimately though, I Was a Teenage Exocolonist is primarily a coming-of-age story, and a very good one at that. The game perfectly captures many universal adolescent moments – that feeling of disillusionment when you realize your parents don’t really know what they’re doing, your first crushes, the wistfulness that comes with leaving your childhood behind. This passing into adulthood is well-captured in gameplay as well. Early on, you’ll bounce around aimlessly, trying out whatever new job pops up, but as you become more confident in the person you want your character to be, you’ll focus in on specific things. And just like in real life, some heavy stuff happens in the game. I Was a Teenage Exocolonist has an entire multi-heading content warning page, which strikes me as a bit excessive, but make no mistake, the game is unafraid to deliver solid gut punches. These moments don’t come off as cheap dramatics, they’re integral to the building of the game’s characters and world, and hey, you may have a chance to fix whatever bad thing went down eventually.

Without giving too much away, Teenage Exocolonist can be played through multiple times, and certain things you’ve learned in past playthroughs can be used to change the course of future ones. Save that loved one who died or learn more about what’s really going on with those aliens that keep attacking you. There are almost 30 endings in the game, and when you take into account each playthrough can take up to 7 or 8 hours, there’s a lot to keep you busy amongst the stars. Of course, a perfect adolescence is truly is the stuff of science fiction, but I have a feeling some folks may spend a lot of time pursuing it.

This review was based on a Switch copy of I Was a Teenage Exocolonist provided by publisher Finji. 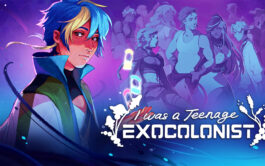 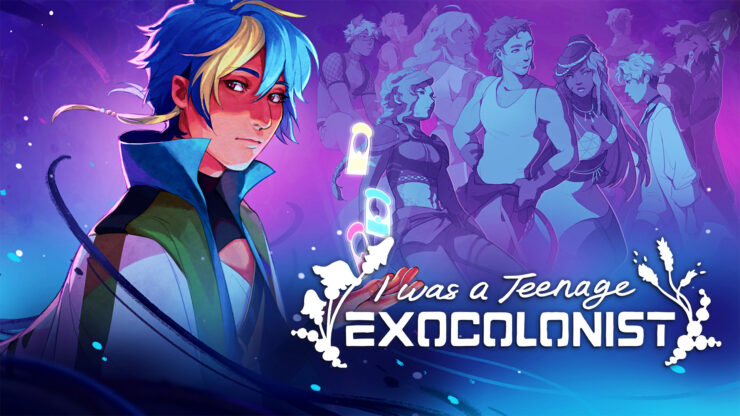 9
Wccftech Rating
I Was a Teenage Exocolonist

I Was a Teenage Exocolonist is an engrossing social sim that offers up deep roleplaying and a wonderfully-realized universe, with fun collectible card game mechanics as a bonus. Perhaps more importantly, it’s one of the best distillations of growing up I’ve ever encountered in a video game. It doesn’t matter if you’ve left the era long behind, don’t miss out on getting these teenage kicks.