As the old saying goes, brave sir Robin stole from the rich and gave to the poor. For his first video game venture on new consoles, Robin Hood himself isn't afraid to engage in a bit of larceny to redistribute the wealth from the State and instead give it to those in need. In Sumo Digital's latest multiplayer title, players will take up the mask of Robin's cause in Hood: Outlaws & Legends. Is Hood's take on PvPvE worth your coin, or is this one title that's robbing you of a good time?

The unique hook to Hood: Outlaws & Legends is that instead of merely facing off against an opposing team to engage in a medieval heist, both teams are actively fighting against the State and the imposing Sheriff of Nottingham. By snatching a key from the Sheriff and unlocking the corresponding vault, players will have to work together to extract the chest of riches and bring it back to their base camp to redistribute the wealth to those in more need; in Hood: Outlaws & Legends, that cash will go to the players themselves and their modest basecamp. The enemy AI is often just as dangerous as actual players and can kill an unaware Marianne in only a few brief hits. To get around this, players will spend much of each match sneaking around in bushes and creeping up behind enemy NPCs and players alike for quiet assassinations as they move to loot a chest from the State's vaults back to their home base.

Once a key is looted, the key carrier will get a notification on what building and floor the chest will be stored on. The room itself changes every match, so learning the layouts to each building helps with a speedy extraction. After discovering a vault and unlocking it with the Sheriff's key, players will have to dedicate one of their four players to hoise up the chest and carry it to a particular extraction point. John is best suited to this purpose, as he can carry the chest faster than other players. Carrying the chest to an extraction point is only the first part of the match; afterward, players will have to actively winch the chest up and out of the battlefield. The winching process requires a player to stay on the winching point and fill it past each progression pip. Whichever team makes it past each pip will be rewarded with an extra bit of gold, so even if someone snatches it from you at the last minute, you'll still be rewarded for your efforts. If you're knocked from the winch, the progress resets to the last filled pip. This last stand of winching the chest up in the final moments is the highlight of each match as both teams keep throwing themselves at the final objective after each timed respawn in a last-ditch effort to steal the victory away from the other team.

Each of the four playable champions to Hood: Outlaws & Legends have drastically different skillsets that fit a particular role in a 4v4 match, but you aren't required to play with a balanced team. If you want to just go ham on the Sheriff of Nottingham with four Little Johns, that option is available right from the start. But by not including a Tooke, you're missing out on his active ability to scan the surrounding area and seek out any wolves that might be hiding in the bushes, or the unmatched bow skills of Robin Hood himself. Each character can further be specialized by leveling them up and investing cash into perks for one of their three skill slots. In addition to the melee and potential ranged abilities, each character also has a unique ultimate ability and an equipment slot that can be specialized through perks later on.

One of the more frustrating features of Hood: Outlaws & Legends is the lack of healing after a slight skirmish. Expect to limp around at half health for lengthy periods of time without having any way to heal back up to full even when staying out of combat for minutes at a time. Tooke can specialize and utilize his stamina-sapping grenade to instead heal teammates within its cloud of smoke, but even this ability requires playing numerous matches with Tooke before you can even purchase the perk that allows for healing. By then, you'll probably just have to get used to limping around the battlefield with just a fraction of health at all times.

Unless you're playing the role of Robin or Marianne and have a keen awareness of where all of the ammo chests are to keep yourself topped off, chances are you're going to need to engage in some melee combat to save your hide. This is Hood: Outlaws & Legends' most contentious feature that no matter how hard I tried, I never felt like I properly grasped the way Sumo Digital intended me to approach it. Characters typically have access to both a light and heavy attack and can mix up their strikes with sprinting and attacks. Unfortunately, the stamina pool for each character is so limited that you're lucky to pull off two light attacks and one heavy before the entire pool is limited, even for the titles' heavy hitter Little John.

Perhaps the most obnoxious character to play with/against is the shaman Tooke whose skill with a censer on a chain can be either your favorite or your worst experience, depending on how you can adjust to his playstyle. Tooke's unique heavy attack launches the censer out straight in front of him, causing an absurd amount of stamina drain in just a single hit. To compensate for this, it has utterly terrible tracking if facing off an opponent that can strafe or dodge out of the way if they can predict the attack. The worst part about Tooke's ability is that even against John, blocking against his attack will still drain John of all of his stamina and seemingly can't be parried even if you know it's coming. I can't even begin to count how many times I've fallen prey to a proper 1v1 with John vs Tooke and getting knocked out by that single move time and time again.

Despite the five maps to choose from in Hood: Outlaws & Legends, the objectives always remain the same: steal the key from the Sheriff, locate and pillage the vault of its lone treasure chest, then safely extract the chest via one of the extraction points. Each map has a different layout to memorize, and knowing the lay of the land is key when it comes to controlling vantage points that give a broader overview of the landscape to see when an enemy team is headed your way long before you can even hear them. The extraction points are always in fixed locations and numbers, with the locations of control points and treasure vaults rotating around each game. As you pick up the quirks to each map, you'll naturally pick up a preferred path to move through and even preferred extraction locations that can benefit from a closer spawn location or a longer run for the enemy team that seeks to disrupt your efforts to plunder the loot and escape to see another day.

Hood: Outlaws & Legends' biggest fault is in the lack of variety to the content available for players here on day one. No matter which map you play on, there's only a single gameplay mode to choose from. No team deathmatch, no king of the hill, no multiple treasure chests, just the single heist mode. I've had a couple of matches that devolved to just throwing our endless spawns at the other team for some melee brawls that wound up being far more exciting than actually playing to the objective.

Upon finishing a match, players are rewarded with a tidy sum of cash for their efforts. Players can toss a coin to members that plundered the vault key, opened the vault, and carried the chest to its final extraction, offering that player a bit of bonus XP for their efforts. Afterward, they've given the choice to contribute the coin to their own coffers for personal upgrades, distribute it to the people to upgrade their hideout, or a sliding scale between the two. Beyond the perks to unlock for each character that are earned with each rank up (you'll still have to purchase the perk itself before you can equip it to one of your character's three skill slots), the only other things to spend your hard-earned coin on are cosmetic upgrades which are typically locked behind accomplishing specific tasks. None of the weapons offer unique abilities and the character skins are all pretty close to one another beyond a fresh coat of paint or some new accessory. Because of this, there's little incentive to tempt the player into stashing their coins up for some unique gear to show off in future heists.

On PlayStation 5, Hood: Outlaws & Legends takes well advantage of the console's unique features to give a bit of a different experience that you won't see on other platforms. As each map begins with a flyover to showcase the objectives, players will feel the heavy thump of the Sheriff's every step. Once in a match, stamina ties directly into the resistance of the DualSense triggers. As players consume their limited stamina pool, the triggers will become stiffer to pull. This gives a solid bit of feedback if the player is too focused on combat to avert their gaze long enough to notice how much health and stamina they have remaining. A feature that's shared across all platforms is the wonderful implementation of 3D audio with spatial awareness. With visual information at a minimum, wearing a good pair of headphones can be more effective than anything else in brave sir Robin's bag of tricks. While sneaking about, the player is nearly muted, but there's still just enough noise to know when someone is sneaking up on you for a cheeky assassination.

What's available to players that pick up Hood: Outlaws & Legends today is unfortunately a fraction of what's planned in the roadmap to come. Perhaps one day we'll revisit Sumo Digital's PvPvE adventure but what's available at launch feels less like a proper standalone release and more along the lines of the multiplayer mode that would accompany an annual Assassin's Creed release. Unless you have a crew of three other merry men to accompany you, perhaps save your riches for a more deserving experience. 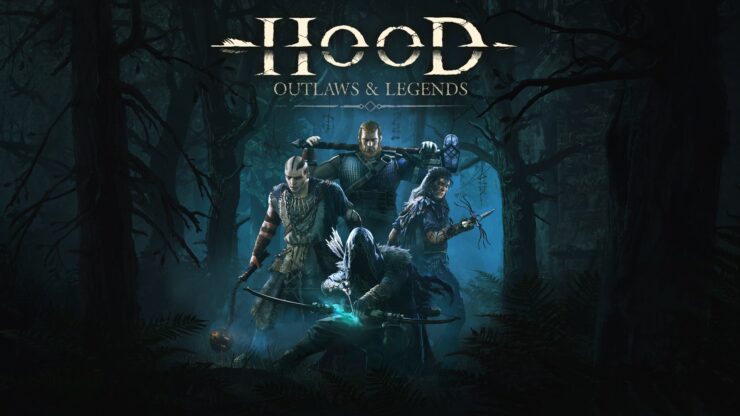 Hood: Outlaws & Legends offers a barebones experience that is best played with a dedicated team of wolves. Those seeking fame and riches on their own may find themselves lamenting the lack of content both available day one and what's to come in the first year roadmap. Hood may certainly grow in the future, but the first impressions leave much to be desired.