Hey! Pikmin Review – Fun, Though Not Quite Great

Captain Olimar really needs to have his spacecraft license taken from him. This is the third time the little man has come out of a perilous crash-landing, and once again, the minute Pikmin are here to help - but this time Olimar’s adventure takes place on a 2D plane, eschewing the series’ Action-RTS roots in favour of a puzzle-platformer affair, and it actually works quite well.

This time Olimar’s bad driving has once again landed himself on a familiar planet, with the wee carrot-like Pikmin happily offering to help in any way they can. This time, the ship’s supply of Sparklium has run low, and a vast quantity of it is required in order to take off and get back home. Luckily, Sparklium turns out to be found in pretty much everything - fruit, seeds, an old watch, a lost engagement ring - all of these things can be collected and harvested for Sparklium, and this is essentially your goal throughout the game. 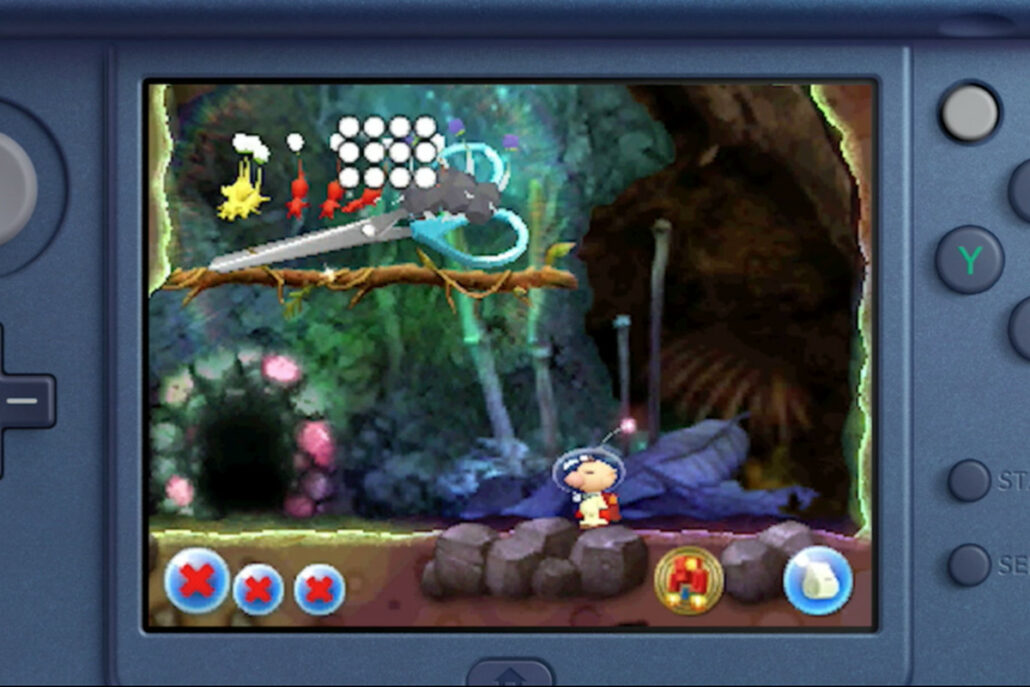 Approaching this game, you’re either going to be a Pikmin fan or not, and which of those camps you fall into will likely impact the amount of enjoyment you’ll be able to glean from Hey! Pikmin. For fans: No, this isn’t really like the Pikmin games you’re used to. Exploring the overworld in search of new secrets and collectibles is basically gone in favour of the 2D perspective, and searching for items is less about building and securing pathways back to your home base, but instead about spelunking in a 3D environment where cave systems can have many levels - in a way similar to Metroidvania games.

This Metroidvania-but-puzzles approach actually works fairly brilliantly when mixed with Pikmin. Whereas in a full-fat 3D Pikmin game you’d spend your time exploring, clearing out enemies and securing routes, Hey! Pikmin is a more linear affair, but with plenty of secret pathways and items hidden along the way.

Each level is self-contained - this isn’t one big overworld or anything like that - with up to three treasures to find in each stage. When levels begin you start as Olimar with no Pikmin - no taking your reserves out on an adventure or anything like that - and you find the Pikmin you need within the stage itself, giving you a pretty strict limit on the maximum number of Pikmin you’ll be exploring the level with. Should you haphazardly lose Pikmin along the way, the game will provide you with new ones - to a certain point. Some levels may have extra areas to explore, if you are able to survive the entire stage with your full team of Pikmin, for example, giving each stage plenty of replayability. 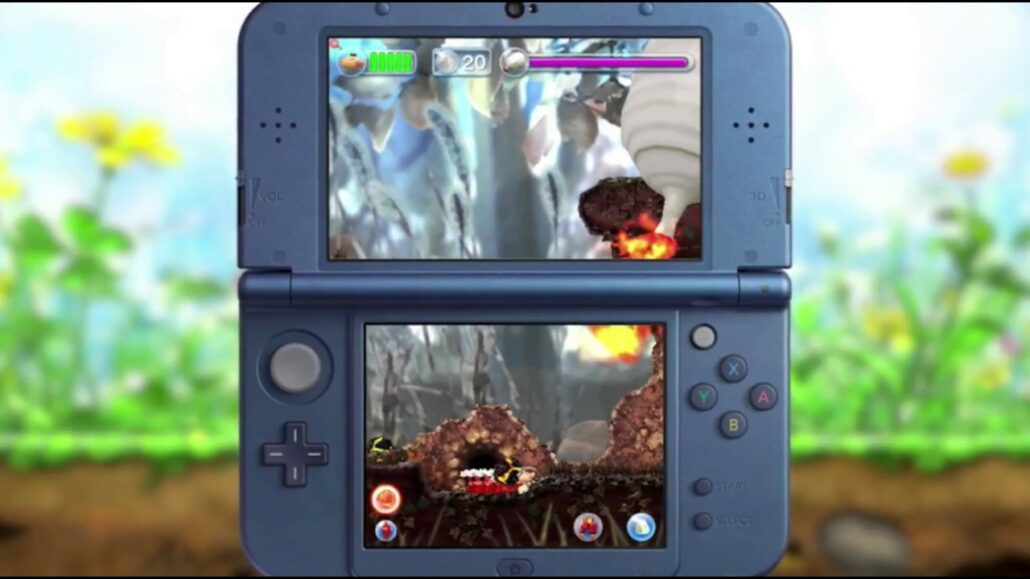 In stages, you’ll find the usual obstacles that’ll be familiar to veteran Pikmin players. Yellow Pikmin can conduct electricity, so you might need them to complete electric circuits, red Pikmin can survive fire, blue Pikmin can swim, and the Rock Pikmin can smash through glass and crystal, clearing paths and blowing apart enemies. It’s the same type of small puzzles you’d find in a console Pikmin game, just adapted for the smaller screen.

What’s refreshingly nice about Hey! Pikmin is that it attempts to use 3DS features in ways that most games simply haven’t bothered with for far too long. For example, this game is played entirely with the Circle Pad and Touch Screen - no buttons required whatsoever, instead placing some action buttons on the screen itself for you to activate with the touch screen while tapping to throw Pikmin about. The top screen is put to fantastic use too - well, the game doesn’t support any sort of 3D feature but is instead used almost as a portrait extension of the bottom screen, allowing for some fantastic views of the levels above you when you spelunk deeper into cave systems. 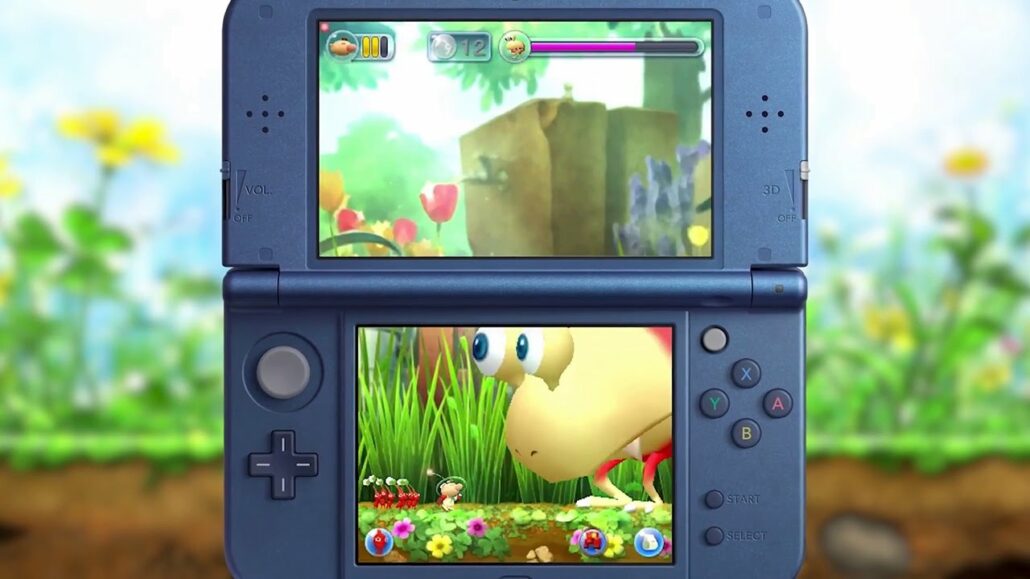 The only factor where Hey! Pikmin is significantly worse than its 3D predecessors has to be combat. In Pikmin combat has always been a key part of the game but in Hey! Pikmin it really feels like an afterthought. Most enemies you’ll find in levels can be dispatched with a single thrown Pikmin, and the slightly larger enemies usually just require you to tap wildly at the beast as Olimar throws his Pikmin as fast as he can. And, unfortunately, that’s all the strategy you can really expect. Boss battles are a highlight, and actually feel like bosses, but as one would imagine, they’re more akin to action-puzzles, where Olimar must navigate his Pikmin out of harm’s way while biding his time ready to fling Pikmin at a weak spot - probably three times to win the fight.

So is Hey! Pikmin worth your time? Honestly, it really depends. Pikmin fans aren’t all going to be pleased by Hey! Pikmin, purely down to how very different it is. This is, ultimately, one of those more slow-paced, chilled out platforming affairs from Nintendo - we’ve had loads of them - but this is possibly the most unique and interesting one. Pikmin’s gameplay fits into the 2D space surprisingly well, and although neither the puzzles nor the action are particularly challenging, exploring areas and collecting items is an addictive and fun diversion.

Hey! Pikmin is a fun 3DS game, one of Nintendo’s better handheld platformers recently, but still not up to the quality and polish we’d expect from console Pikmin titles. Pikmin fans might be a bit disappointed by this one, but anyone willing to give it a shot will find a surprisingly deep and fun little adventure to while away the hours.