Arrowhead Studios are a strange bunch. You needn't look further than their first release, Magicka, to see exactly how quirky they are. Helldivers meets this and, with reckless abandon, blasts off into space to extend the utter insanity to the rest of the universe. The goal? Spread 'managed democracy' to all parts of the galaxy, defend Super-Earth and do Starship Troopers proud by blasting everything you see.

"What is managed democracy?" I hear you ask. Honestly, I don't know, I don't care and neither should you. If you do, when you inevitably buy Helldivers you can look it up in the in-game encyclopedia. Me? I'll be killing everything that has the misfortune to breathe while on the same planet as me. 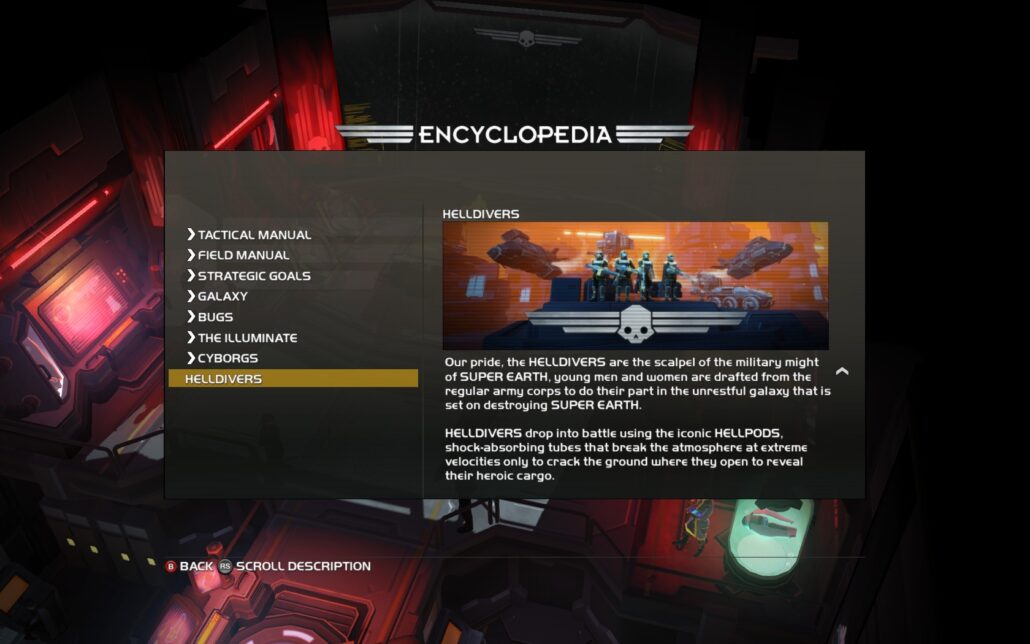 It's easy to misjudge Helldivers. The first few missions are your tutorial, they'll teach you how to shoot, run, crouch, use stratagems and, most importantly, die. It's essential learning for new recruits and you are likely to forget the latter. I was perfectly happy clearing my first few planets solo, thinking I would be able to avoid the scourge that is multiplayer gaming once again. This soon changed, dying became both hilarious and terrifying and doing it with three others is one of the most satisfying experiences I've ever had in multiplayer gaming.

As you move your way through the missions, watching the sheer insane number of kills, deaths and accidentals rack up as you and the myriad of other players online at any one time, you start to encounter the more challenging difficulties. There's no way around it and, true to their name, some are nigh on impossible even with you and three others making up a full squad of Helldivers. It's a testament to the game that even when losing I find myself laughing as a result of the comical ways me and others die, the mistakes we make and how the game seems to revel in the chaos.

This is where the game feels most like Starship Troopers, particularly so when facing the enemy bugs faction. You'll be fighting your way through a planet, completed a few of the objectives with no real issues. It leads you into a false sense of security, thinking that the hard difficulty isn't that hard at all. Suddenly you can find yourself under siege, bugs swarming from all sides and huge tank-like bugs are stomping in. In the panic mistakes are made, allies fall to errant grenades and another ally dies through walking under the falling hellpod carrying reinforcements. The sheer insanity is brilliant. 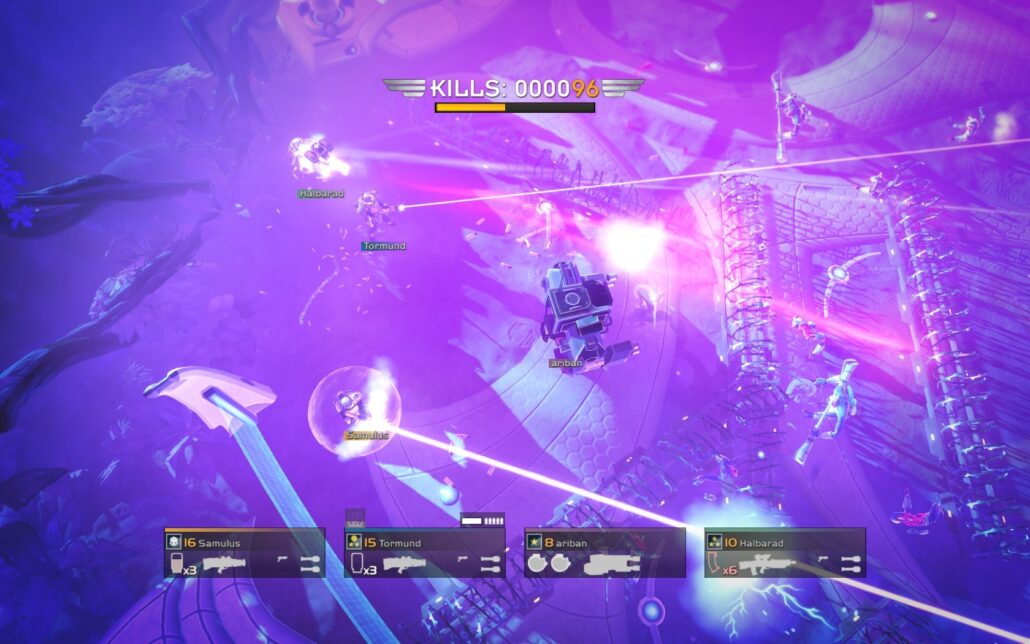 The fun of playing Helldivers isn't merely through this fast paced chaos. There's a genius in the mechanics, how they allow you to go solo if you like, but making multiplayer an incredibly rewarding experience, particularly so when you're in a team that works together and communicates well, often even assigning yourselves into specific roles through the stratagems you load out with.

Stratagems are limited to four when you head into a mission. You will start with a basic set with more unlocking as you advance and complete. A number of these stratagems allow you to bring in features that make teamwork a key component. As an example, one brings down an armored vehicle that can seat all four members of your squad, making you a match for any enemy. Another brings down a rocket launcher that can be used and reloaded by yourself, but taking valuable time. However, another member of the squad can carry the resupply kit and reload it for the launcher to be fired again almost instantly. Rarely does working as a squad, with such simple but effective mechanics, feel so good.

Where the combat, teamwork and stratagems come to their logical conclusion and the most effect is when you get to the extraction point once all objectives have been completed. You call down the shuttle to extract your team, but you have to hold the point for 90 seconds. This can feel like the longest minute-and-a-half of your life as the Cyborgs, Bugs or Illuminates throw everything they've got at you. You bring out your big guns, moving away isn't an option so you will hold your ground or die trying. Only one of the squad needs to be extracted for the mission to be successful, but bonus xp is gained when everybody makes it. 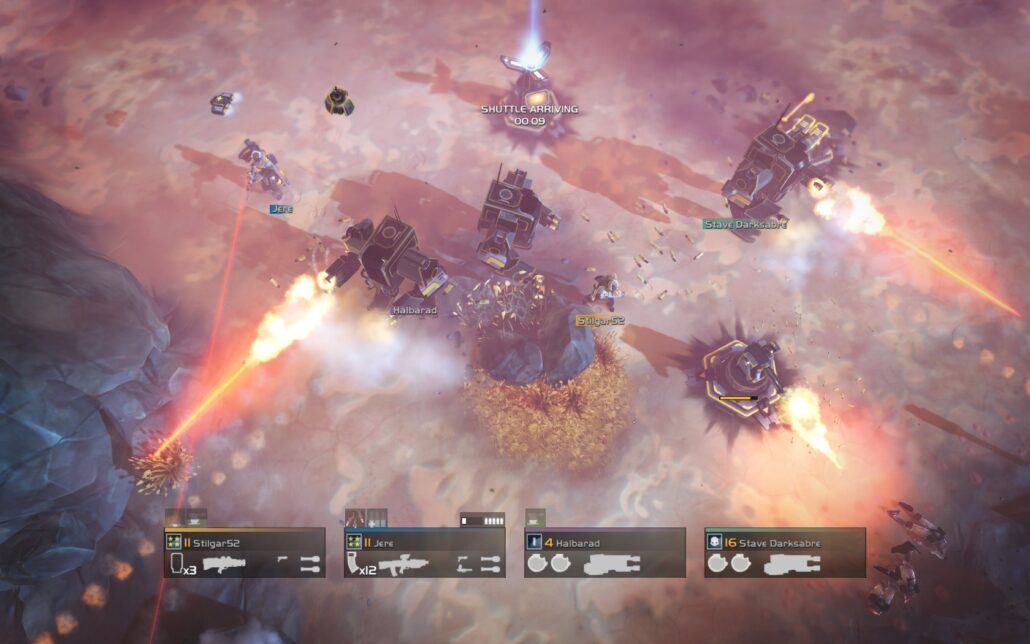 Possibly the major downside to Helldivers is how the stratagems are called, and generally how the vast majority of objectives are met. You are tasked with entering a certain number and sequence of buttons while under threat of attack, which acts as its own timer and inevitably leads to mistakes. While this is a very effective mechanic and a good test, it soon gets repetitive when a new sequence of buttons to press is practically around every corner.

This repetitive nature can also be found after playing any prolonged period of time due to how the objectives and missions repeat themselves. The planets you fight on are procedurally generated and features a wide variety of terrain, scenery and small features that will keep it looking different. However, there only seems to be a handful of objectives, from capturing an area, escorting survivors and killing a certain amount of enemies, to around five or six objectives that all require you to resort to the button-entry task mentioned previously.

One other issue, that barely feels like it should be an issue considering the theme of the game, is that your actions can seem inconsequential when looking at the overall meta-campaign. Every mission you complete feeds into an influence bar, but the influence required is so huge that your actions alone seem unimportant at best. This isn't a problem now, while literally thousands of people are playing at the same time, but if the community ever dies down the later stages of the game and actually defeating an enemy will be locked out for everybody. 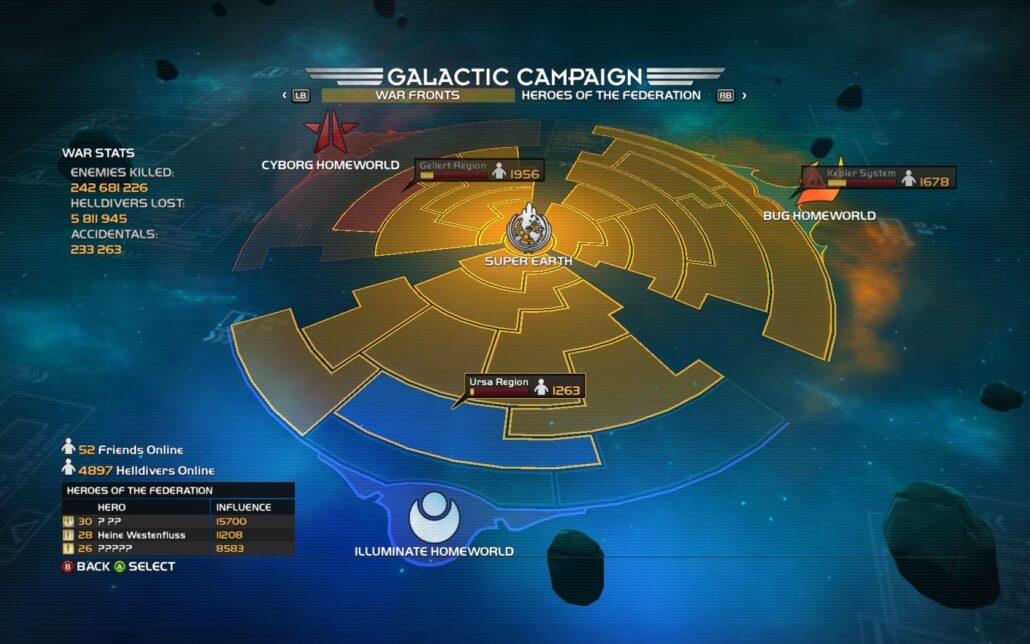 Considering that one of the issues I have with the game is if the community dies down, and it's a big if considering how fun Helldivers is, it shows just how well Arrowhead have done. How good Helldivers is can be gleaned through this next sentence: even though I own Helldivers on Steam, I'll be buying it for the PS4/Vita as well. At £16, or your local equivalent, you'll more than get your money's worth.

Helldivers is an fast-paced, funny and, most importantly, fun game. It has the same strange sense of humour found in Arrowhead's previous titles and is one of the few games that makes multiplayer worthwile, even when dropping in with random teams.