Until Elon Musk’s Neural Lace becomes reality (or at least a reality that consumers can buy), humanity needs to rely on more primitive human interface devices for our computing needs. Keyboards, mice, joysticks, controllers and VR touch interfaces are the weapons of choice and right now I have a nice new weapon which has been gracing my desk for the past couple of weeks, the Razer Naga Trinity.

Before we get into the detail of usage, let’s talk about what the Trinity actually is. For those who are slightly overwhelmed by the selection of mice available in the razer line-up (Mamba, Lancehead, DeathAdder, Abyssus, Atheris, Orochi, Basilisk) and even more complicated by the multiple editions of any given model (Tournament, Elite, Hyperflux, Epic, Hex, Chroma), let me clear it all up for you. Actually wait, no sorry, I simply can’t. Basically, there’s a lot of different mice made by Razer, without much logic, rationale or obvious hierarchy to the range. The positive spin out of all this is that there is kind of something for everyone and are also some deals to be had and the Razer Naga Trinity feels like one of those.

The reason it feels good value (despite being £100 for a mouse) is that the “Trinity” in its name isn’t referring to the Father, Son and Holy Ghost, but rather to the fact that this is a 3 in 1 kind of deal. It’s effectively a Naga with three options for magnetically interchangeable side panels, these being:

Although £100 isn’t particularly cheap for a mouse, the Naga Epic Chroma (a Naga with the 12 button panel only and an 8,200 DPI laser sensor instead of the Trinity’s 16,000 DPI) currently sits at £125 although it is wireless (blech).

I start out with the familiar 2 button panel to begin with and brace myself to install the latest version of Razer’s Synapse software. For those unfamiliar, Synapse is the name of Razer’s software configuration utility. It lets the user setup things like colour, profiles, macros, button shortcuts etc. It’s been a while since I used it and I see that Razer are now onto what they’re calling the Beta of version 3. I’m quite glad Razer are calling this a Beta though as it’s a sign of intent that they know it has shortcomings and needs further refinement. 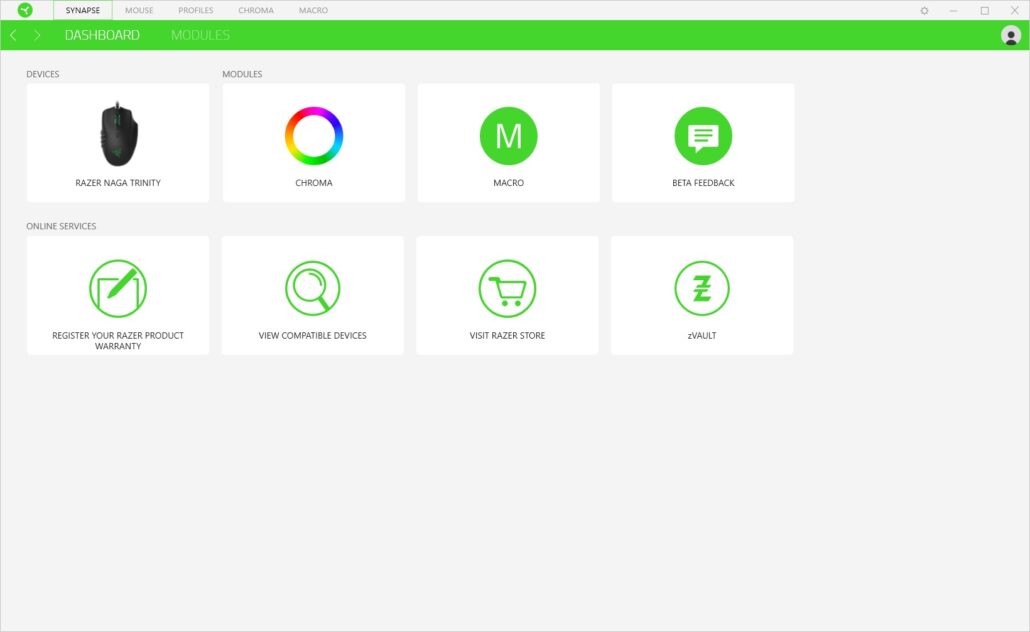 Synapse, it's improving but still not amazing...

In general I don’t particularly get on with gamer hardware company software packages. They tend to be an unintuitive, mangled mess of tabs with slow response to usage, badly designed and semi-regularly crash. This holds true in my opinion of both major competitors in the gaming hardware arena, namely the Corsair Utility Engine and Razer Synapse. Both have major shortcomings, although they have been slowly improving their software packages but they still have a long way to go to catch up to their hardware, realistically pretty much any version of CUE or Synapse I’ve ever used has felt like a beta.

With Synapse 3, Razer starts to feel like it has gone further than Corsair on the software front. If nothing else, it LOOKS better designed. Slightly confusing to me is the reasoning behind Razer deciding to call the tray icon “Razer Central” which then lets you launch Synapse. Once you’ve opened it, there are tabs for Synapse, Mouse, Profiles, Chroma and Macro with sub tabs which change depending on which top level you’re in. Still confusing is why there is a tab called Synapse when I thought the entire piece of software used to be called Synapse but hey ho.

Many of the other frustrations remain however in terms of performance, stability and ease of use, but it’s the first time I’d say there has actually been a bit of daylight visible in the gap between the two companies software offerings.

Specs of the Razer Naga Trinity itself are suitably impressive as you’d expect for a mouse of this price, including:

The above is basically a fancy way of saying it is fast as hell with lots of buttons and colours. I use a 32” UHD monitor and anything over about 7000 DPI feels unusable.

Razer Naga Trinity – In the Box 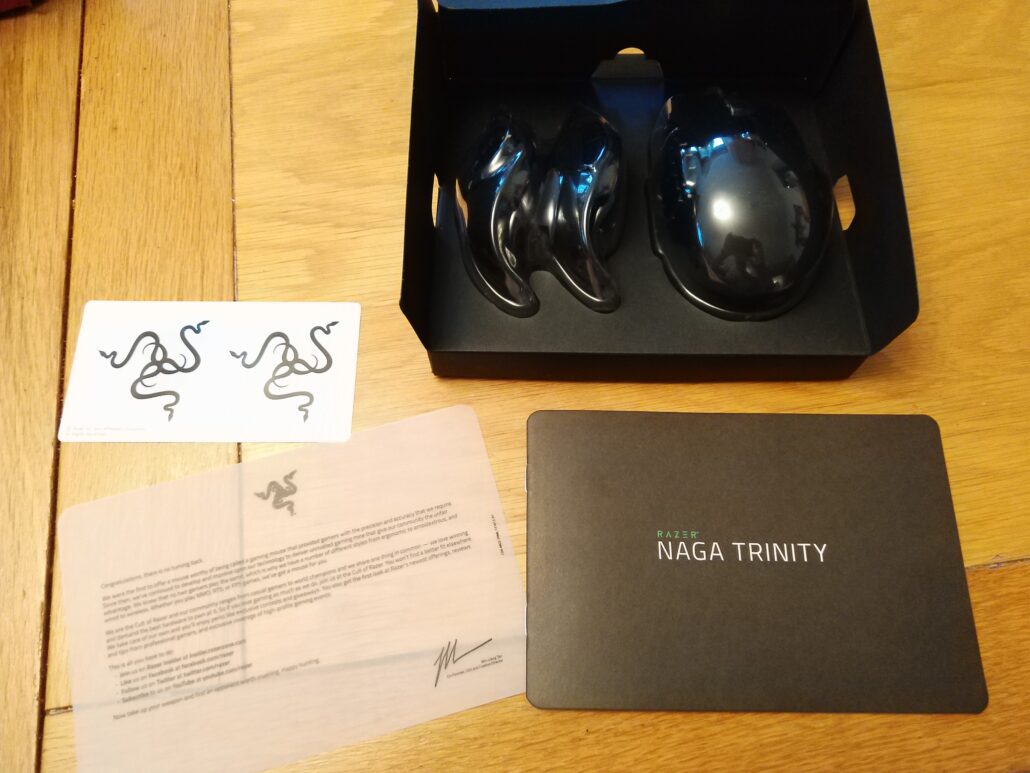 The usual stickers and docs...

It’s a reasonably well packaged Razer affair we’re looking at here. Opening the box you’re presented with the usual “Welcome to the Cult of Razer” and instruction booklet along with a couple of Razer logo stickers. The mouse itself and the three interchangeable panels mentioned above round out the contents.

Pulling the Naga Trinity out and looking at it closer, it’s a typical Razer affair. Matte black with a logo and wheel that can obviously have RGB (or Chroma) colour profiles applied to them. The side panel needs a reasonable amount of heft to remove from the mouse making me reasonably comfortable that in an intense gaming session they won’t accidentally dislodge. Putting it close to the housing and the strong magnets do their work, pulling it home with a satisfying “thunk”.

Razer Naga Trinity – In the Hand

I’m quite picky when it comes to mice, I suppose most people are. In general I go for a fingertip grip meaning that the thumb and the extreme tips of my fingers are pretty much all I keep in contact with a mouse and movements are very small. Palm grips or claw grips are generally not for me so the Naga feels a bit unnatural to me mostly because of its contoured grip with a resting place for the ring finger. I’m used to guiding the mouse with the inside of my ring fingertip, I can still do this but it’s a bit further out than I’m used to.

Buttons have a decent click feel to them and the wheel is one of the first I’ve used which actually has a reasonable amount of resistance for sideways movements (enough to require conscious intent but not enough to make you strain to activate). I personally slightly prefer a wheel which has a bit less distance between resting points and not as harsh a click as the Naga but these are minor points.

I'm pleased to note the super slick pads on the base of the mouse which mean it glides nicely directly on my wood desk. 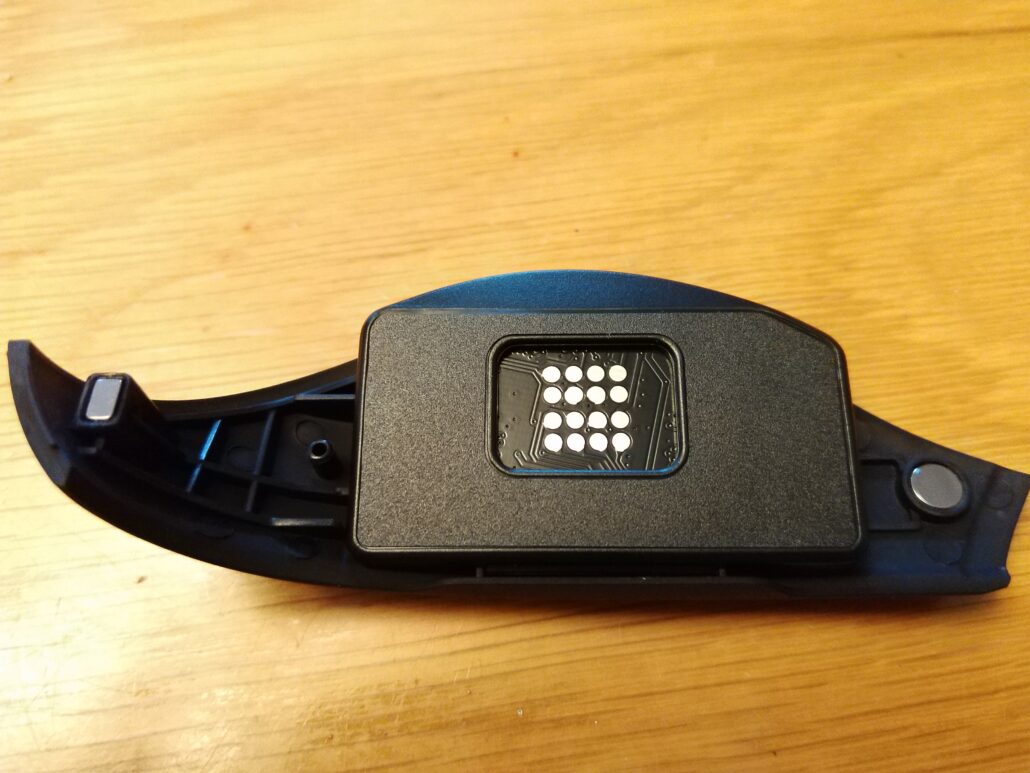 A magnet at each end keeps the contact panel secure

Ok, time to get real, I detach the 2 button panel and attach the circular 7 button one. I’m not a MOBA player and don’t have any real reason to need 12 buttons on my mouse side panel so the 7 feels ideal in terms of giving me a decent amount of options without too much to get lost in. The sizes of the buttons feel good and easily identifiable from the thumb, there’s a small rubber pad in the centre of the circle where your thumb naturally comes to rest (or at least mine does, your mileage will obviously vary depending on hand size etc).

Synapse itself is still something of a pain to setup with gaming profiles but after grappling with the system for a couple of hours I’ve kind of figured out how to link profiles to certain games and program the buttons to do what I want. Performance is great as you’d expect from the mouse and despite occasionally hitting the wrong button on the thumb panel, I’m soon using the Naga without problem.

Switching games and familiarising myself with the buttons again for this game profile, again the Razer Naga Trinity is quick to play with and feels natural in hand.

My main issue is that these days, I unfortunately don’t have as much time for gaming as I’d like. That means that muscle memory for different control schemes between lots of games aren’t going to be something I remember easily. As such, I found that my most used functions with the mouse is tying a lot of commonly used windows functions and programs to the buttons.

Helpfully I can bind anything from Razer specific functions like Hypershift and Synapse profiles through to normal windows shortcuts like copy, paste, opening task manager or notepad etc and this is actually the majority of what I’m using the Naga Trinity for. 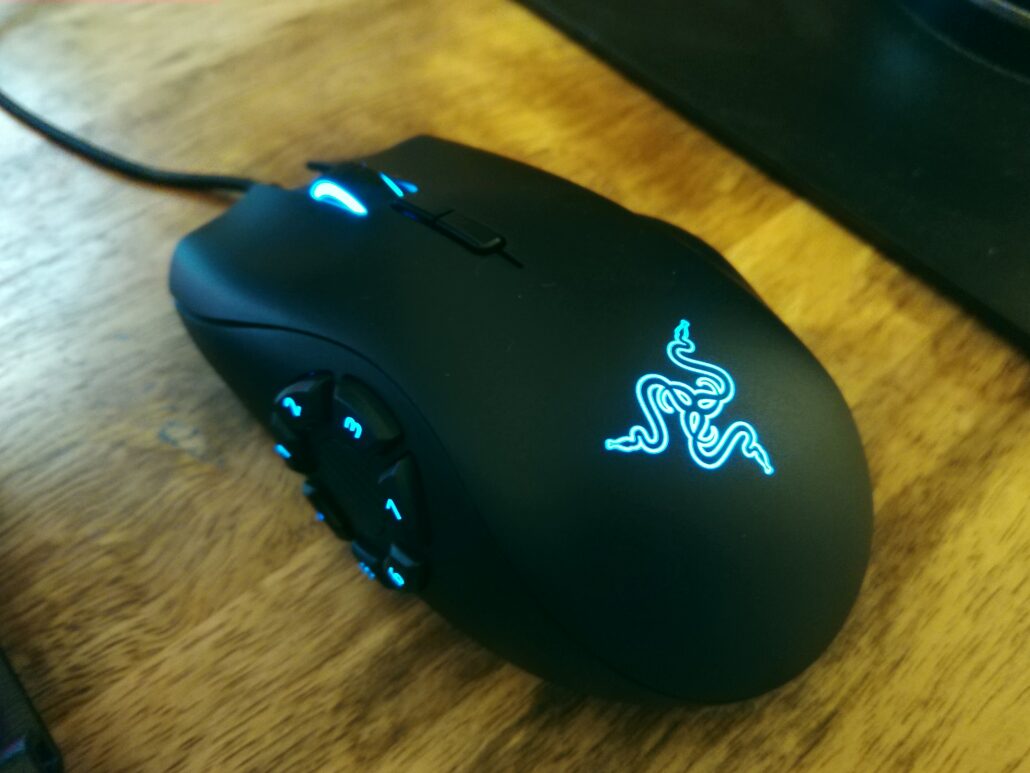 The Razer Naga Trinity is a great mouse if you’re a claw or palm grip mouse user. It’s also a great mouse if you’re a tip grip user who uses the little finger for moving the mouse around since the rubber padding on the outside of the mouse is in perfect place for the pinkie. Unfortunately, I’m none of these which is a bit frustrating because in every other sense, I love this mouse. The functionality on offer, and ease with which I adapted to using the circular panel is excellent. Synapse has stepped things up a gear from an interface perspective although still has further to go to improve stability and user intuitiveness but it’s better than it has ever been before.

The mouse is only available in right hand format guise but it certainly ticks a lot of the right boxes for the gamer crowd. I’d love it if they made a Naga Trinity without the ring finger rest, maybe Razer will read this review and launch a “whiny tip gripper” edition!

That much aside, this is a great mouse. If the shape is to your taste and you want the ability to switch between 2, 7 or 12 buttons, there’s not really anything else on the market that’s going to fit the bill. Selling a real “one size fits all” (at least from a button perspective if not a shape perspective) mouse feels like a win and the fact that it doesn’t cost a lot more than other typical gaming mice is a win. Definitely worth considering if your grip suits.

If you're a palm or claw grip mouse user, the Razer Naga Trinity is a great mouse that will give you a wealth of gaming and productivity options.