Out now
Type Flight Pedal Controller
Price €320 including VAT for EU, €256 for Rest of World

This review is of a pair of MFG Crosswinds, available from: http://mfg.simundza.com/products

Simulation (sim-yuh-ley-shuh n). According to the Shorter OED, it means: “The action or an act of simulating something.”

I’m a bit of a sim fan myself. There are all kinds of sim games out there these days, racing, people, cities, there even used to be an earth simulator (Sim Earth, by Maxis back in the day, anyone remember that??).

For me though, many of these other forms of sim took a back seat to one of my true loves, that of flying. Much of my youth was taken up by Microsoft Flight Simulator, Falcon 3, Falcon 4, Flight Unlimited, Fleet Defender, Gunship 2000, TFX, X-Wing, Tie Fighter, all of the Wing Commander games among others.

Back then, the internet was obviously not what it is today. People with hobbies that were slightly obscure were reliant on sometime reliable, sometime not magazines, bulletin boards (along with dial-up fees) and the random opinions of friends. Needless to say, all of this resulted in some, shall we say… less than optimal experiences and purchases.

Fast forward a quarter of a century and it’s a different world. The power of the web along with cheap and fast access in many parts of the world has created a haven for communities of hobbyists. Whether you’re in a facebook group, subreddit or one of however many specialist sites dedicated to the subject of your choice, it’s never been easier to get the information you need to help you figure out what to buy. 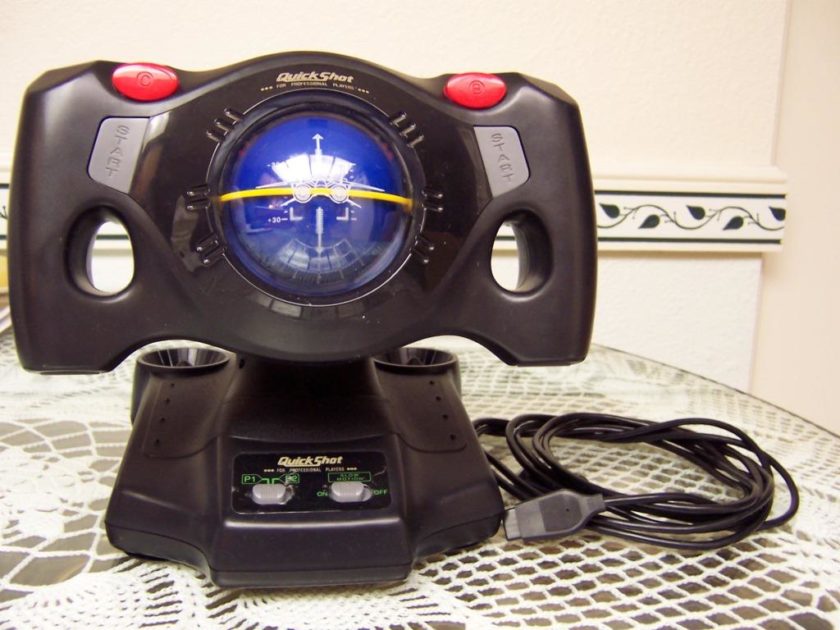 The QuickShot of my youth... Yeahhhhhh, no.

In many ways, my love of sims is kind of what brought me back to PC gaming with the advent of Star Citizen in late 2012. Since then, I’ve tried several different control methods, including joystick, controllers and a few different HOTAS setups.

The main problem as I see it is always a question of axes. At the prosumer end of the market, where people get relatively high end gear without going completely crazy, there are a couple of decent joystick/throttle combinations out there, notably the Saitek X-55/56 Rhinos and the Thrustmaster Warthog.

Ignoring some of the more obscure setups out there (twin stick, HOMAS etc), the HOTAS has been a mainstay of flight sims for a long time and therein lies the problem. It’s a logical setup, but chasing a decently intuitive control mechanism for 6 degrees of freedom based flight has always proven problematic for me, particularly given the relatively straightforward control layout of a typical joystick/HOTAS. In the old days of programmed in yaw/roll/pitch rates, this wasn’t a problem of course, today with the physically modelled flight systems of Star Citizen and others, things get a bit more complicated and this is where additional controllers attempt to fill the gap.

So for the past year and half, I’ve been getting by with a Thrustmaster Warthog HOTAS trying to figure out what my ultimate setup is going to be. The Warthog is an excellent piece of kit, well put together, solid, reliable and responsive, but assigning the various digital hats to some of the other degrees of freedom just left me with an itch I couldn’t quite reach. I tried out a Saitek X-55 a friend has as I often wondered if I’d made a wrong decision in going with the warthog over it since it has a twist grip but was left underwhelmed by the experience.

Pedals are something I’d been thinking about for a while. It’s a logical progression from what I can tell, real pilots use pedals, why shouldn’t I? That of course is a slippery slope that ends with buying a plane or some kind of ridiculous simpit type thing which my wife would absolutely not approve of, so I need to be careful. I’ve tried controllers but again of course, the complexity of flight (whether atmospheric or in a vacuum) is simply too vast to be able to reasonably capture using such a limited input device as a controller (check out my frustrated experiences with Elite Dangerous on an Xbox One here).

Mouse and keyboard while being great for FPS etc, again don’t capture the intuitive requirements of directional movement in 6 degrees for me. Ultimately I want something that provides a feel of balance.

But before we get into the MFG Crosswind itself, let's get a primer in 6 degrees of freedom flight.