The .hack series is still today one of the most interesting cross-media projects ever created. Starting with the .hack//Sign anime, fans of the series have come to love The World, a fictionary MMORPG, and its true nature, which is far from being a simple playground where players can go adventuring together. Those who have missed the original PlayStation 2 release of the .hack//G.U. trilogy can now enjoy them with several enhancements with the .hack//G.U. Last Recode remaster, which includes an additional volume that ties some loose ends while providing a little bit of fan service that definitely doesn't hurt the whole experience. The enhancements, however, don't manage to fix all of the game's issues.

.hack//G.U. Last Recode allows players to begin from any of the four volumes: Rebirth, Reminisce, Redemption, and the brand new Reconnection. As they are all part of the same story, it's advisable to begin with the very first volume, Rebirth, or to check out the Terminal Disc videos, which offer a recap of the events that have happened in the first four .hack games and the Roots anime, which acts as a prequel to the game's events.

.hack//G.U. Rebirth starts right from Haseo's first entry into The World R:2, the second version of the fictional MMORPG developed by CC Corp. Upon entering the game for the first game, the Adept Rogue meets two players who offer him to teach the very basics of the world. The two, however, turn out to be Player Killers, who would have killed Haseo with ease if not for Ovan, who appears at the very last moment to save him. Eight months pass since the encounter with Ovan, and Haseo is known as The Terror of Death, a Player Killer Killer who's seeking a legendary PK known as Tri-Edge, guilty of putting Haseo's close friend Shino into a coma. Following a hint given by Ovan himself, Haseo confronts Tri-Edge in the Hulle Granz Cathedral. The PK, however, turns to be way more powerful than Haseo, defeating him easily and Data Draining him, bringing the character back to Level 1 and unlocking a mysterious power. Not giving up, Haseo vows to become strong again to be able to defeat Tri-Edge, save Shino and eventually understand more of The World and its many, many mysteries. 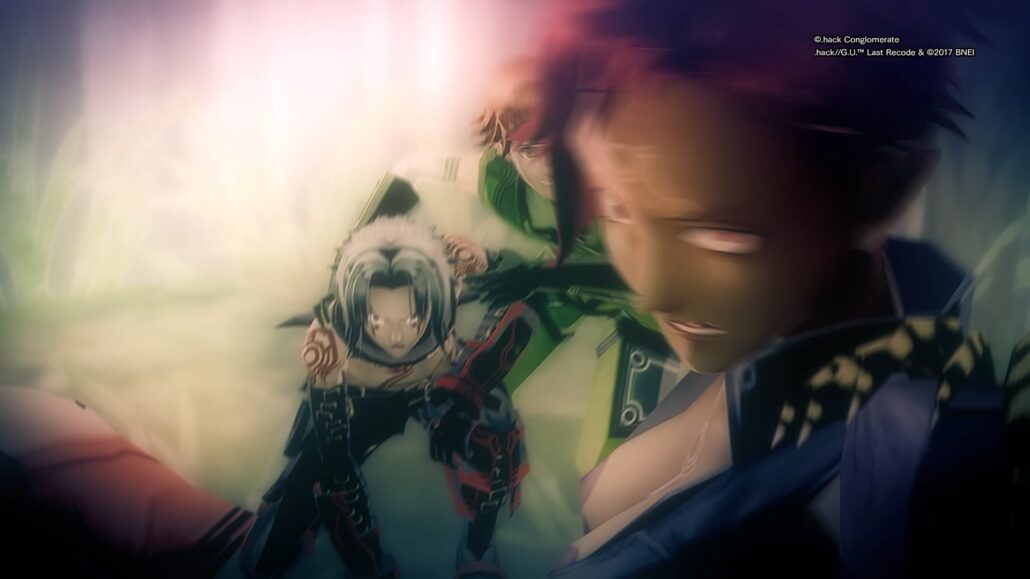 The story is definitely one of the strongest points of the games included in this Last Recode, mostly thanks to the setting. The World: R2 is much more complex than what it seems like, with its fictional programmers injecting much into the game that can only be experienced by special individuals. The story is also made quite compelling by the plethora of characters that will join Haseo in his quest: while a few are just there for comedy relief, like Piros the 3rd, many of them are actually central to the whole plot, especially the other seven Epitaph users who have the same power as Haseo to summon the Avatars, the only power that can defeat AIDA, a bizarre computer anomaly that has appeared in The World: R2. While many of the main characters actually played a role in the original .hack games, it's possible to enjoy the story without any prior knowledge. Additional story material available through the fictional version of the Internet included in the game fleshes out the universe nicely, making it even more complex than what it may seem like at first glance: an event happening in the real world which can be read about in the News section often has some sort of tie with the events happening in The World. The only real issue with the story is how slowly it unfolds at times, with the Rebirth's story being the worst offender in this regard.

While the third volume Reminisce provided a good closure for the whole story, some plot points were left hanging, and are now resolved with the new fourth volume, Reconnection. Truth be told, the fourth volume is extremely short and serves more as an epilogue than anything else. Focused primarily on Ovan, the story of Reconnection follows Haseo's in his final journey to save his friend and finally leave The World behind for good. While contained, this epilogue story brings a true closure to the events of the whole saga.

The .hack//G.U. games play as an evolution of the original .hack games, retaining some of the most interesting features. As an action role-playing game at heart, players directly control Haseo as he ventures into The World: R2. The fictional MMORPG sports different central hubs, depending on the server, filled with shops and other facilities, and dungeons, which are defined by a very peculiar system. Outside story dungeons, players can access an almost unlimited amount of dungeons by creating them through keywords, which are learned by checking out the game's forums, talking with characters and so on. The keywords alter the setting of the dungeon, their structure and final objective, the enemy's levels, the rewards and more. At the end of each dungeon, whether its a story related one or one created by the player, performance will be graded, giving players an additional reward depending on the obtained grade. 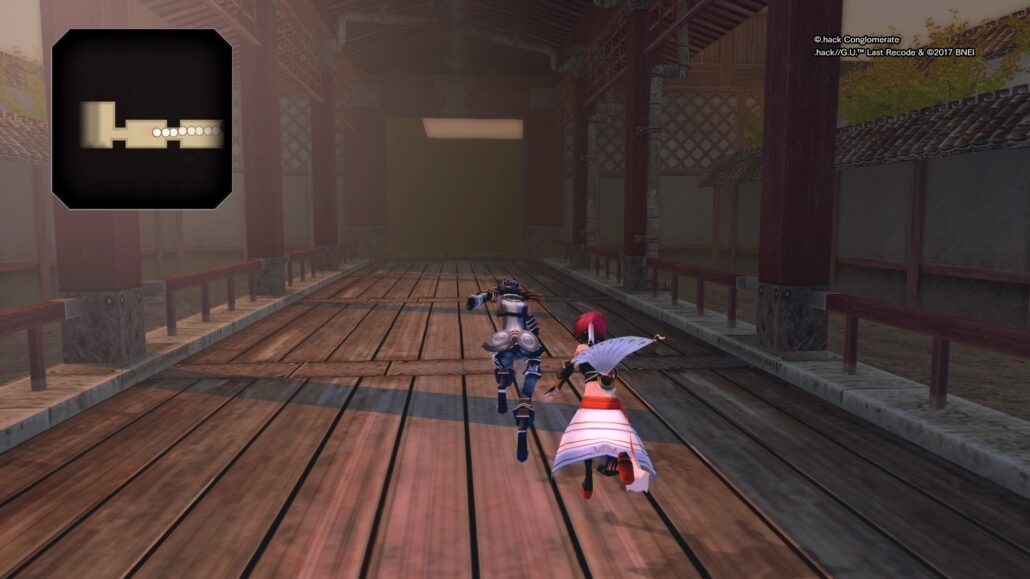 Dungeon design in the .hack//G.U. games have been improved considerably from the previous games. In place of dungeons consisting of a series of corridors with the occasional trap, the new games' dungeons feature more varied layouts, traps and even some simple puzzles such as warping through the right devices, activate contraptions with the help of Chims, defeat enemies located nearby select locations to unlock the final reward and more. While these additions don't prevent the games from becoming slightly repetitive in the long run, they do provide some welcome variation.

Combat has also seen some welcome improvements over the original games', becoming a true action combat system. During combat players can only control Haseo who can unleash a simple combo attack, a charge attack and special skills which can be activated from the menu or from the Skill Trigger. Attacking an enemy over and over will make them drop their defense and let Haseo activate Rengeki through the Skill Trigger, which makes all the attacks of a special skill Critical and grants an experience bonus at the end of a battle. An additional mechanic is the Awakening system, which allows players to power up regular attacks, unleash a barrage of spells of the opposite element of the dungeon and, later on, unleash a powerful Data Drain attack. The selected Awakening can be performed once a special gauge has been filled by performing actions that are appreciated by the two other party members, such as healing, use Rengeki and special skills and more. Each party member, who comes with his own class and special skills, has his own conditions for increasing morale, so choosing the right party members is the key in making battles easier. More variety is also added by the fact that Haseo's powers as an Adept Rogue evolve during the course of the games, allowing him to switch weapon types between daggers, greatsword, scythe and eventually twin guns. Sadly, like for dungeons, it's easy for combat to become a bit stale after hours, as most regular enemies don't require much strategizing. Bigger dungeon bosses may require a little bit more of resource management, but if leveled high enough, they don't pose much of a threat either. 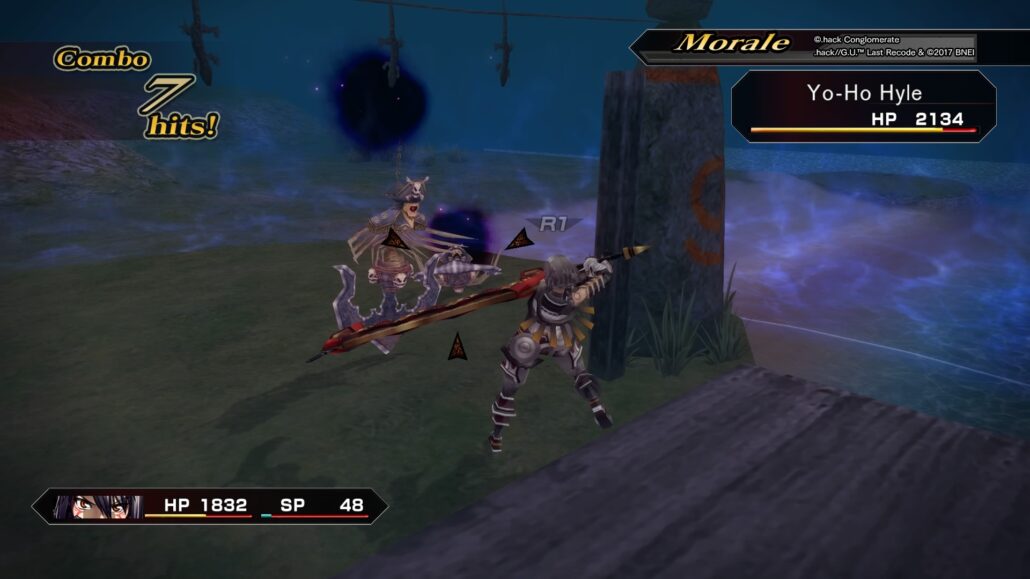 Other types of battles, the ones involving Haseo's Avatar Skeith, are much, much more interesting. They play similarly to the Zone of the Enders games, where players control the Avatar in flight, attack the enemy's weak points with ranged attacks, and eventually close in to unleash even more powerful scythe attacks. These battles aren't particularly challenging either, but it's more variety that the games needed. The low challenge level, especially if overlevelled, sadly makes some of Last Recode's sub-systems kind of pointless. There's the ability to customize weapons by adding skills such as increased HP, Critical Hit rate and so on through special items, but it's hardly required to complete the games.

While the basics of the games are still the same, .hack//G.U. Last Recode does attempt to improve things as much as possible. The increased walking speed and battle tempo make dungeon exploring less tedious, while UI improvements make the whole experience quite smoother. Sadly, the .hack//G.U. games still feel a bit "stiff" when played, and now more than ever, considering how far action role-playing games have gone in these years. If it weren't for the engaging story, it would have been quite hard to stomach how repetitive things get over time. This feeling was lessened in the original releases, as they have been launched months apart from one another, but playing them one after the other makes this issue even more evident. For those who wish to breeze through the four games, a Cheat Mode has been added, allowing players to start with everything pretty much maxed out to just experience the story. 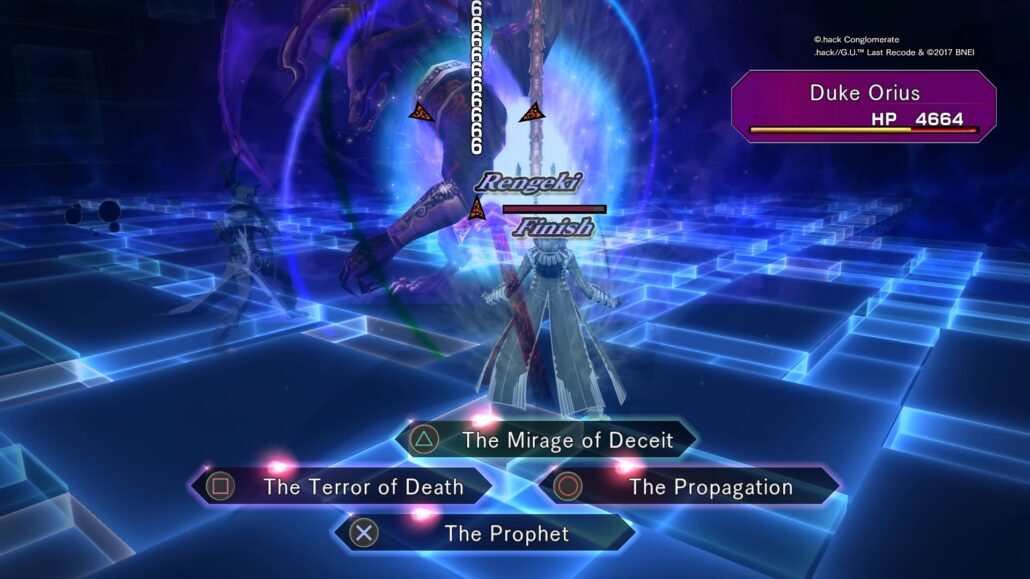 Battle and interface improvements are only part of the enhancements added in .hack//G.U. Last Recode. The games run at 1080p, 60 FPS on the regular PS4, with 4K support available on both PS4 Pro and PC. Movies have received a resolution upgrade, textures and shadows have been improved and Anti Aliasing support added. The first three volumes still look like PlayStation 2 games, obviously, but the enhancements are definitely welcome. Interestingly enough, Reconnection looks much better than the three other games. Character models have been enhanced further, and the new movies look incredibly nice.

So many years after their original release, it's a bit difficult to rate the games included in .hack//G.U. Last Recode. For fans of the series, Last Recode is easily a must buy, as the original volumes never looked and played better, and Reconnection provides a welcome closure. For those who never experienced the franchise before, it may be more difficult to look past some of the issues that plague the game such as the slow pace of the story, and the repetitive dungeons and combat.

PlayStation 4 version tested (review code provided by the publisher). You can purchase the game on Amazon.

The .hack//G.U. Last Recode remaster is a more than worthy way to experience the original PlayStation 2 releases, offering several enhancements which improve the experience considerably and a real closure with the new Reconnection volume. The enhancements, however, do little to improve the stiffness of the experience, the repetitive dungeon design, and the slow story pace, making .hack//G.U. Last Recode a must buy only for fans of the series. Newcomers, however, may still find something to like in the games, as the story, albeit slowly paced, is quite interesting, and the world well fleshed out.