Both of these series have now become the choice of enthusiasts and overclockers as they come with an impressive specifications list and some of the best design schemes on the market. CES 2018 saw G.Skill presenting their new Trident Z Royal RGB memory, a DDR4 memory kit which stays loyal to the Trident Z design but offers a royal touch to it. The memory kit sure seemed spectacular and G.Skill assured us that they'll be using the best-binned DRAM dies on the Royal RGB series, offering speeds of up to 4600 MHz.

G.Skill was kind enough to send us a review kit of their Trident Z Royal RGB DDR4-4000 (CL17) 16 GB memory kit. I will be taking a look at how the memory stacks up to other memory kits that we have tested and whether the design makes up for the high price of this particular Royal series.

The G.Skill Trident Z Royal RGB 16 GB DDR4 memory kit rocks some impressive specifications. The new Trident Z Royal kits with Samsung B-dies are some of the fastest clocked memory kits which can go as high as 4600 MHz. The kit we received is optimized at a clock speed of 4000 MHz (PC4-4000). The memory kit consists of two 8 GB DIMMs which make up a total of 16 GB in capacity.

The memory kit has a tested latency spec of CL17 and the timings are 17-17-17-37-2N for this specific kit. Voltage set at reference is 1.35V and the memory kit comes in an unbuffered package with non-ECC (Error Correction) design.

The memory kit is fully compliant with Intel's XMP 2.0 and can be easily set to its rated clock speeds through the BIOS shipped on the latest Intel motherboards. Memory compatibility differs from motherboard to motherboard so make sure that your board is high-end and rated to support high clock speed memory sticks.

G.Skill offers a limited lifetime warranty with their G.Skill Trident Z Royal RGB series memory kits. The height of these DIMMs is 44mm or 1.73 inches. They are a bit bulky and the heatsinks extend from the top making it harder to install these with a dual-fan heatsink cooler. Make sure there's enough space with an air cooler before installing these. The kit would go perfectly well with an AIO liquid cooling solution, leaving room for the RGB lighting showcase.

We are looking at the F4-4000C17D-16GTRS SKU which features 16 GB of RAM capacity which is clocked in at 4000 MHz at CL17 timing. The box is sealed by a single holder which can be pushed up or down to gain access to the contents within the package.

Within the package are two DDR4 DIMMs, both of which are held within black colored foam to protect the package during shipping as this is a very fragile product in design which can easily be damaged.

Outside the package, the G.Skill Trident Z Royal series includes the most stunning DRAM modules I have ever seen. G.Skill has managed to make their existing Trident Z memory modules even more interesting with the Royal theme and it sure would become a nice option for the PC modding community.

G.Skill provided us with their silver colored Trident Z Royal series memory. Do note that there are both silver and gold colored DIMMs available, however, I believe that silver is a very neutral color when building a PC compared to Gold. Gold sure amps up the appeal but you'd have to pick up a list of matching components otherwise you won't be doing much justice to your build. The silver color opens room for various build options.

The top of the memory modules houses the highlight of the memory kit, the Radiant Crystalline bar. This unique design is kind of reminiscent to the insides of a Geode with an entirely crystal designed light diffuser which provides maximum light refraction, allowing your PC to shine even when using in low-light conditions.

The crystalline top runs the entire length of the DIMM as was the case with the Trident Z RGB series. As always, G.Skill provides you full functionality of this feature through the Trident Z Royal RGB software which allows various modes and configurations for LED tweaking and the option to set off the RGB LEDs completely.

The frame of the memory DIMMs is of a high-class design that uses polished aluminum heat spreaders of either gold and silver color (silver in our case). There's also the extra Trident Z Tri-Fin design on the top just next next to the RGB diffuser that helps deliver extra cooling performance for a memory clocked this high.

The memory sure looks spectacular but beware that it can easily catch fingerprints and requires you to clean them with the cloth provided in the package or use gloves when installing them in your PC.

For testing, I used the latest Intel Core i9 9900K processor which is compatible with higher frequency memory like the Trident Z Royal RGB Series. The motherboard used was a GIGABYTE Z390 AORUS Master and I booted the memory without any issues. The XMP profile to enable the 4000 MHz frequency had to be set from the BIOS which wasn't a hard task. The new 300-series motherboards are fully compatible with the fast DDR4 DIMMs.

The memory kit comprises 2 DIMMs that operate in dual channel mode. Since we were running a Z390 platform, the memory was operating in a dual channel.  The memory is clocked at 4000 Mhz which is one of the highest frequency I have tested to date. Clock timing is set at 17 and the capacity is 16 GB for this specific kit.

The main focus of the new G.Skill memory kit is RGB and boy oh boy, does it look great. The RGB LEDs are controlled directly through signal processing via the DDR4 memory slot. G.Skill has software known as "Trident Z Royal Lighting Control" which is still in infancy but does offer good support for the memory on various Intel 300-series motherboards.

The memory runs in the default "Rainbow Wave" mode when plugged in the slots. G.Skill has enabled RGB support on ASUS AURA motherboards and will later be extended to other manufacturers. We tested the kit with a GIGABYTE motherboard and while the software ran without any issues although this is currently BETA support so we can expect further features.

Through the software, LEDs for each memory can be configured individually. There is a range of RGB effects and animations available along with static mode and you can also turn the LEDs on and off. 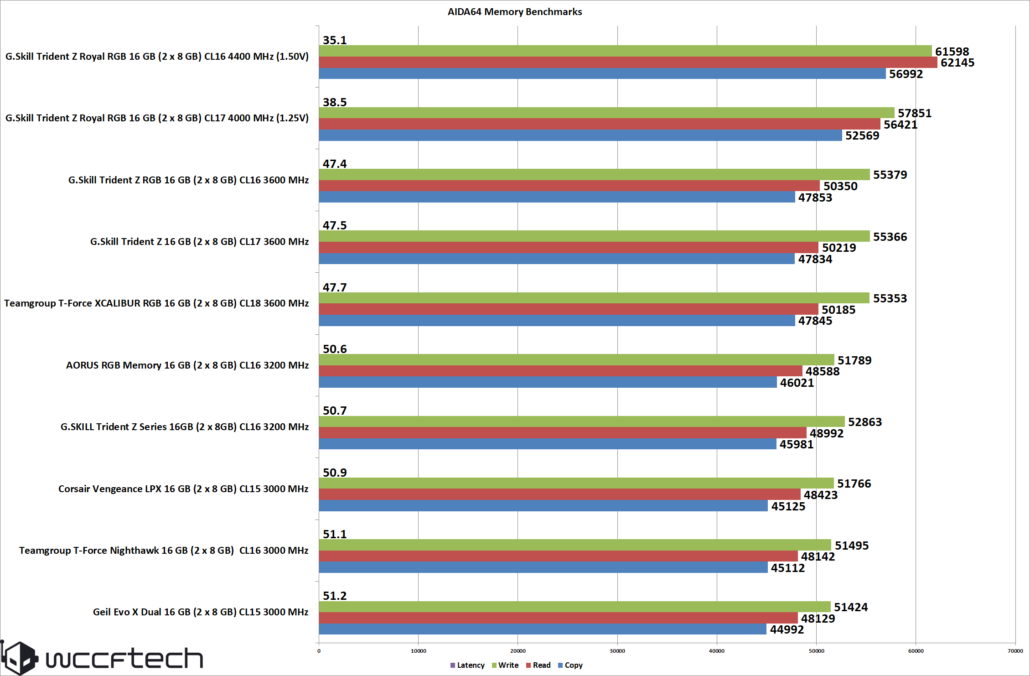 Gaming applications generally don't see huge gains with different memory kits but DDR4 has enabled a huge gain in memory frequency which can impact gaming performance. Moving from the stock 2600 MHz to 4000 MHz can have a slight effect on performance and the improved CAS timings on some of the high-end SKUs can result in better overall FPS and system responsiveness.

G.Skill has proved it once again that they can create some of the most beautiful memory modules for PC gamers and enthusiasts. The Trident Z RGB was already a great design but taking that as a foundation for Trident Z Royal, G.Skill has crafted a stunning design which offers more than being just a visual showpiece.

Sure, RGB is not to everyone's liking, but aside from looking great, the Trident Z Royal is a very solid memory kit that runs at it stated clock speeds without any issues. G.Skill has developed a reputation among the enthusiast community as a manufacturer of solid, high-performance and reliable memory. So we got a 4000 MHz memory kit, tested it on a high-end Z390 motherboard without running into any issues. I even went as far as overclocking the kit to an impressive 4400 MHz with much tighter timings of CL16 while staying within the JEDEC range of 1.5V and the test setup felt a lot more responsive.

As for the RGB software, G.Skill has really worked hard in this department. I remember the last time I used their RGB software for the Trident Z RGB memory when it released, it was very clunky and would crash all the times. Even the LEDs on the Trident Z RGB would remain stuck unless you cleared the previous profiles which were a cumbersome process. I am glad to say that I found no such issues using the more refined Trident Z Royal Lighting software which is fluid and can address the configurations really fast. It was a breeze testing out the new software and with more boards that are going to be added to the Trident Z RGB compatibility list, you can expect this to be a solid ram for your PC.

The G.Skill Trident Z Royal RGB series memory kit is definitely an eye-catcher and rocks an impressive specifications list with blistering fast speeds of 4000 MHz, solid overclocking performance and one of the best RGB implementations for memory modules in the industry. But all of this comes at a hefty price and the 4000 MHz, 16 GB kit would set you aside for $350 US that really makes the regular Trident Z RGB series to be sighted as a better option. 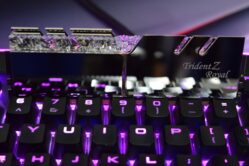 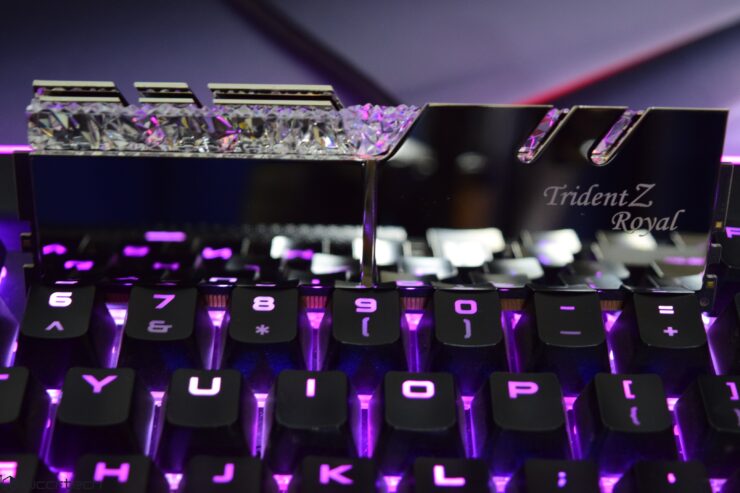