Both of these series have now become the choice of enthusiasts and overclockers as they come with an impressive specifications list and some of the best design schemes on the market. What we will be looking at today is how G.Skill is redefining how PC memory is made for gamers and high-end users. We will be looking at G.Skill's latest Trident Z RGB DDR4 memory kit which has been one of the most popular DDR4 memory kits at several retail outlets.

The G.Skill Trident Z RGB 32 GB DDR4 memory kit rocks some impressive specifications. The new Trident Z's are some of the fastest clocked memory kits which can go as high as 4266 MHz. The kit we received is optimized at a clock speed of 3600 MHz (PC4-28800). The memory kit consists of four 8 GB DIMMs which make up a total of 32 GB in capacity. 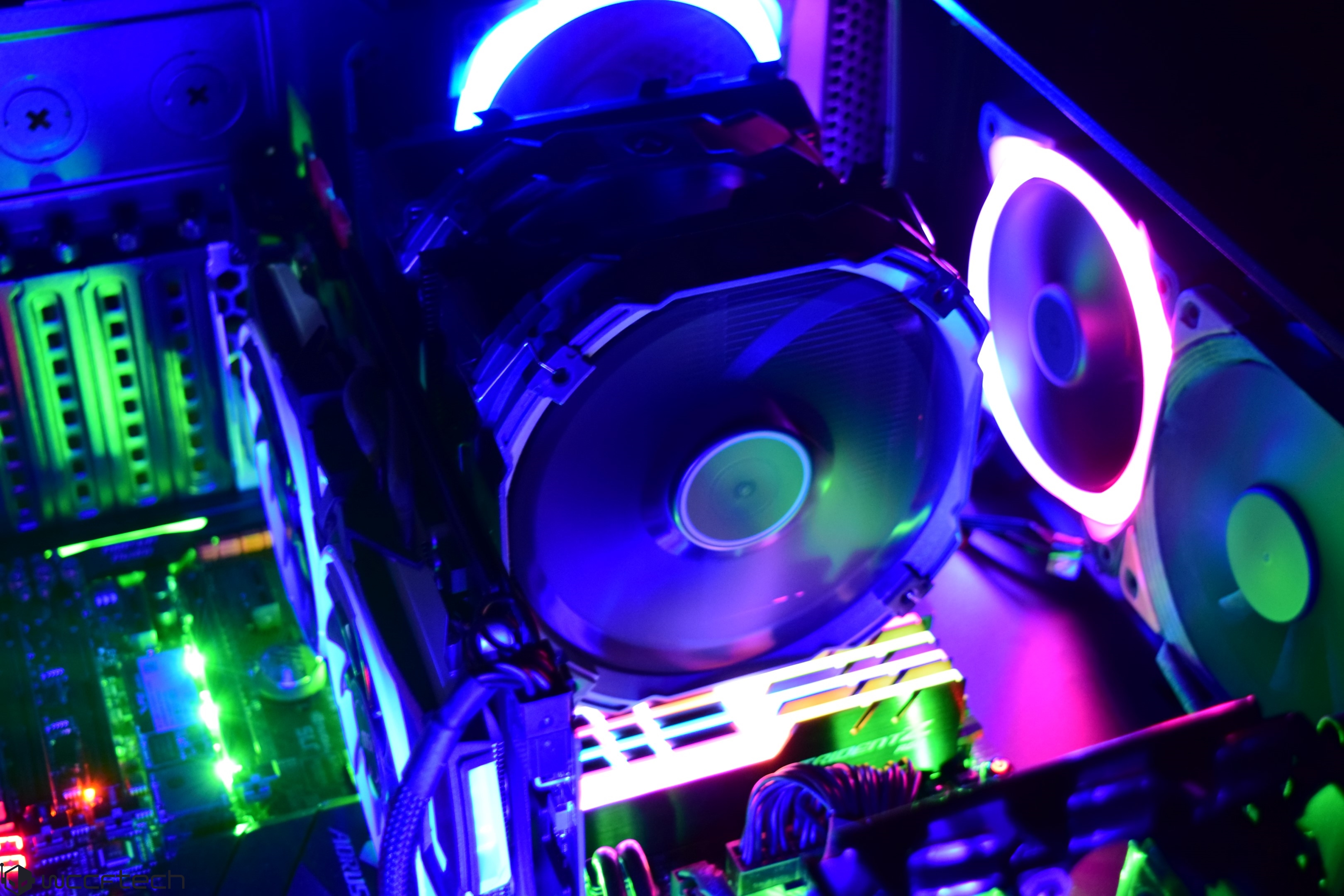 The memory kit has a tested latency spec of CL16 and the timings are 16-16-16-36-2N for this specific kit. Voltage set at reference is 1.35V and the memory kit comes in an unbuffered package with non-ECC (Error Correction) design. The memory kit is fully compliant with Intel's XMP 2.0 and can be easily set to its rated clock speeds through the BIOS shipped on the latest Intel motherboards. Memory compatibility differs from motherboard to motherboard so make sure that your board is high-end and rated to support high clock speed memory sticks.

G.Skill offers a limited lifetime warranty with their G.Skill Trident Z RGB series memory kits. The height of these DIMMs is 44mm or 1.73 inches. They are a bit bulky and the heatsinks extend from the top making it harder to install these with a dual-fan heatsink cooler. Make sure there's enough space with an air cooler before installing these. The kit would go perfectly well with an AIO liquid cooling solution, leaving room for the RGB lighting showcase. 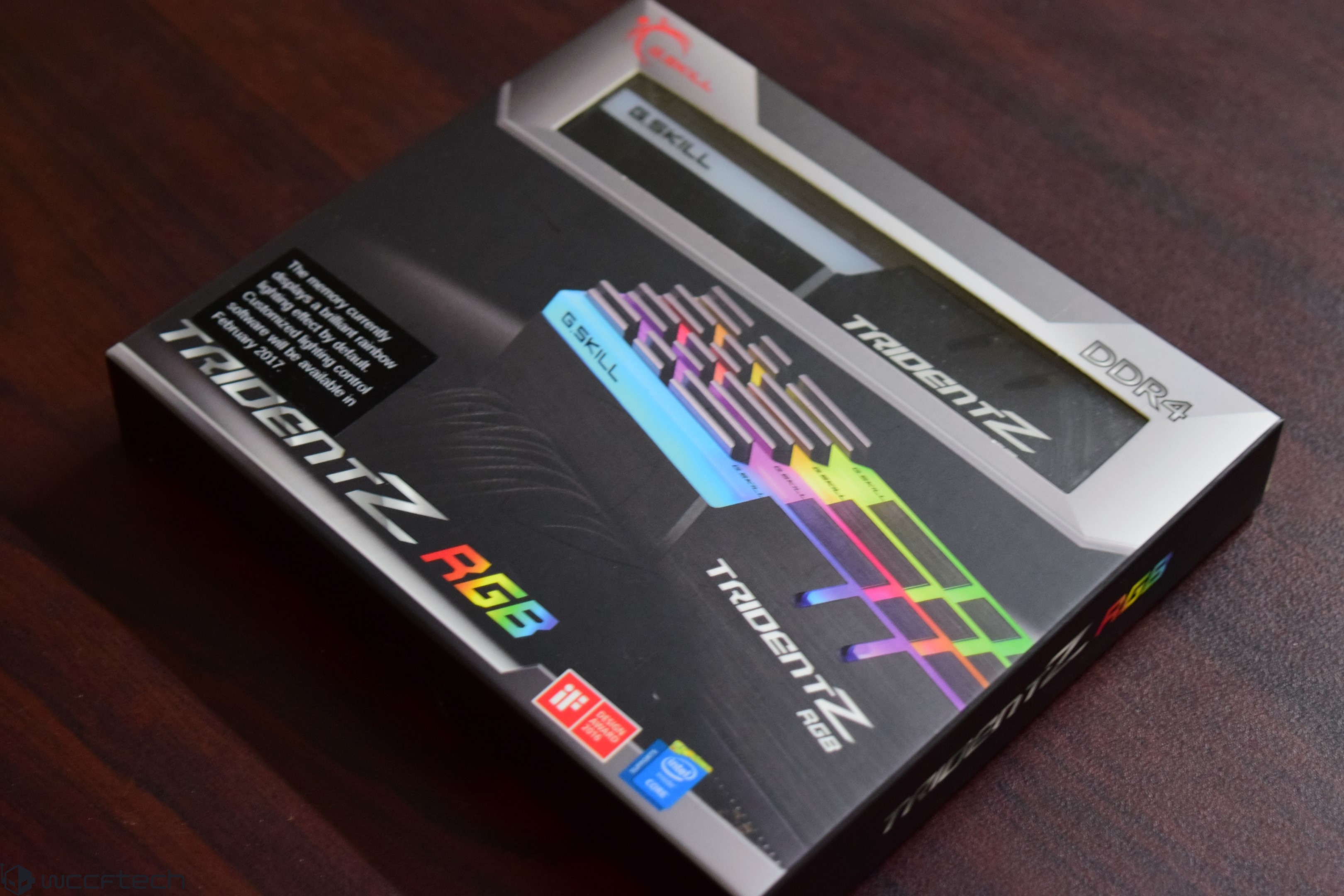 The back of the box reads down an introduction of G.Skill's Trident Z RGB series memory along with the specifications. In our case, we are looking at the F4-3600C16W-32GTZR SKU which features 32 GB of RAM capacity which is clocked in at 3600 MHz at CL16 timing. The box is sealed by a single sticker which can be easily removed to access the memory kit. 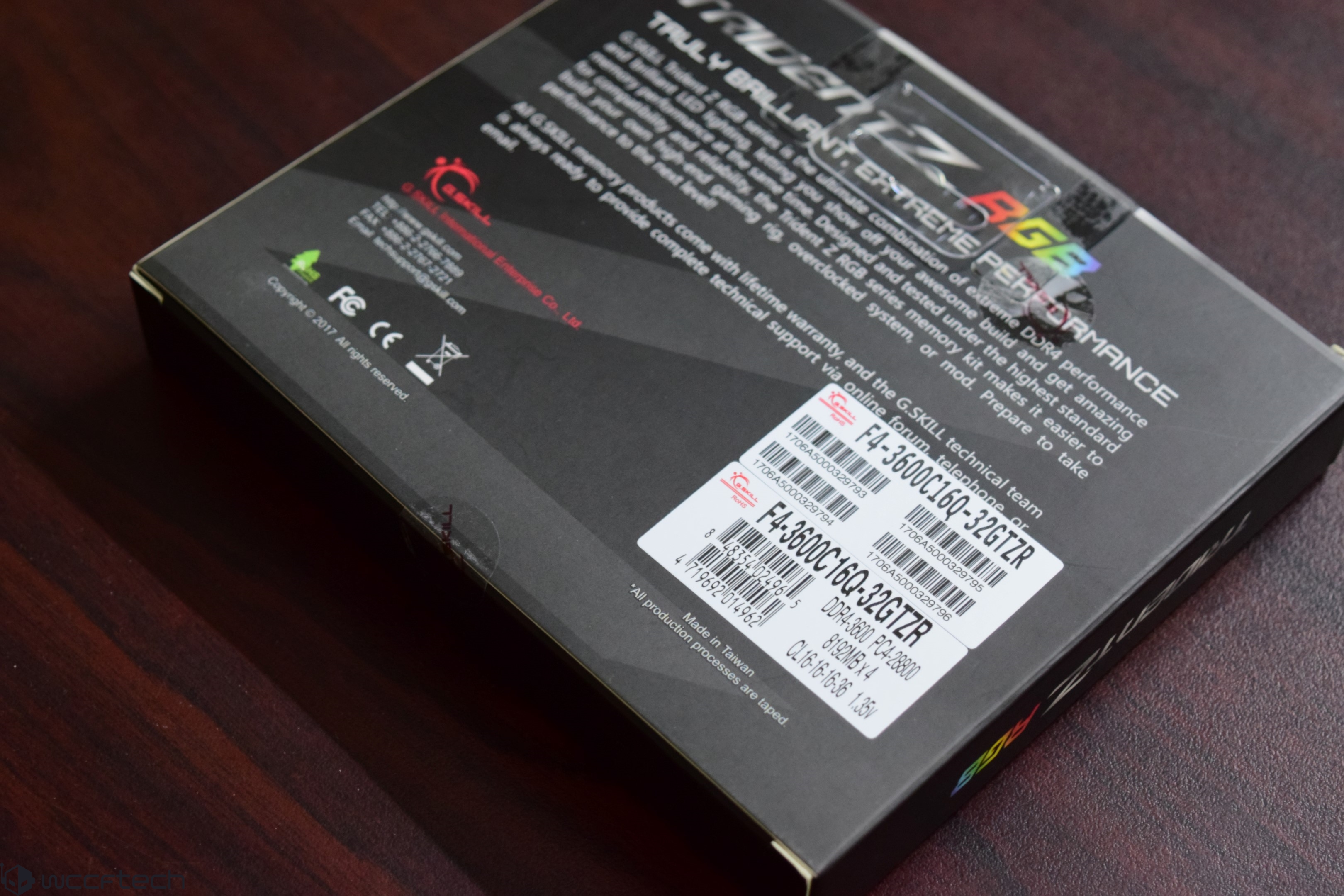 Within the package are two plastic containers which hold four DDR4 sticks (two inside each container). Both containers are easy to access and come with two G.Skill case stickers which look great. 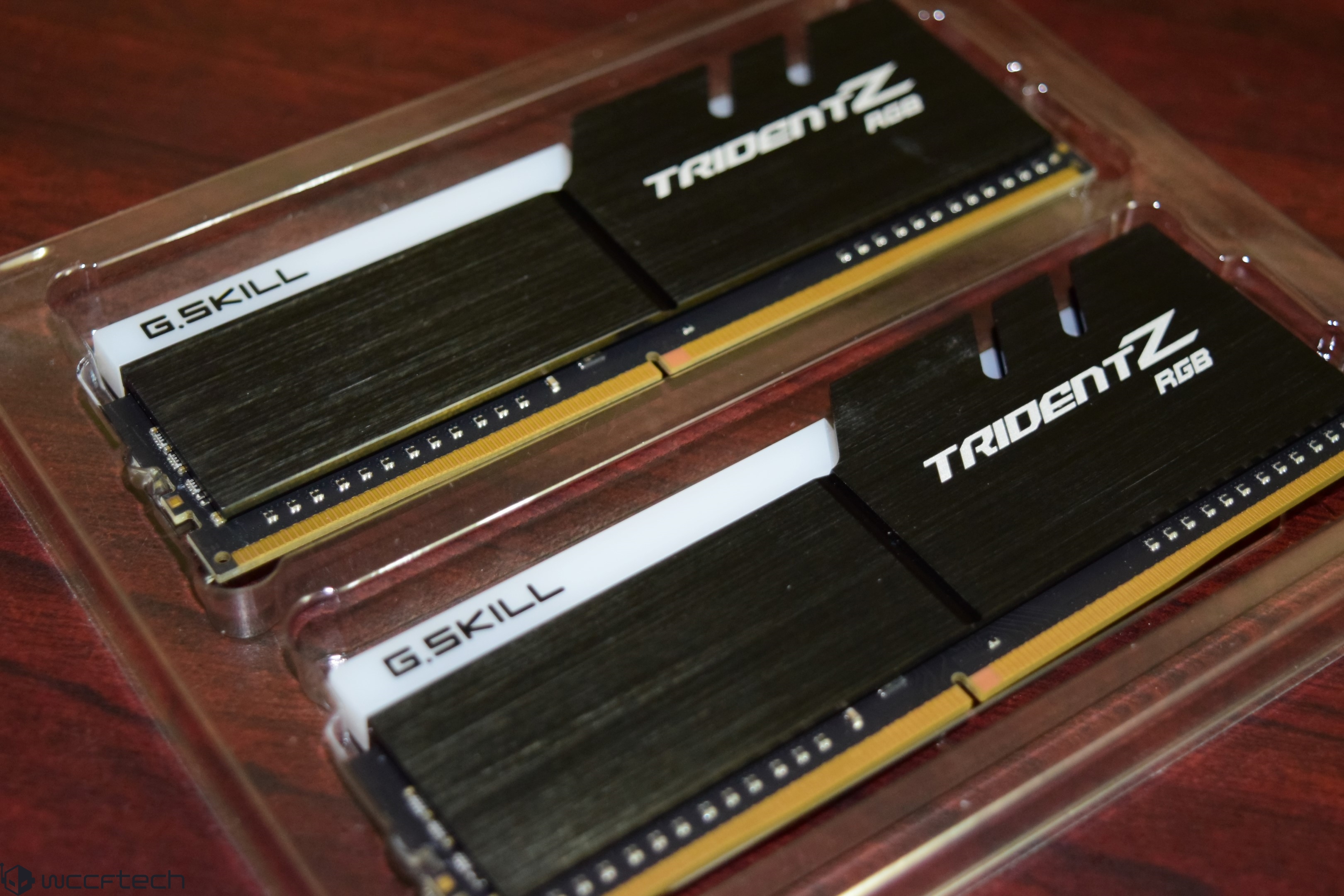 Outside the package, the G.Skill Trident Z RGB series includes the most stunning DRAM modules I have ever seen. Sure, Corsair Dominator series is also one memory kit that stands out from the rest but G.Skill has designed a stunner. The front side of the G.Skill Trident Z DRAM features a brushed metallic black texture while the back features a brushed metallic silver texture. This goes well with all types of PC setups even if you don't want to use the RGB feature. 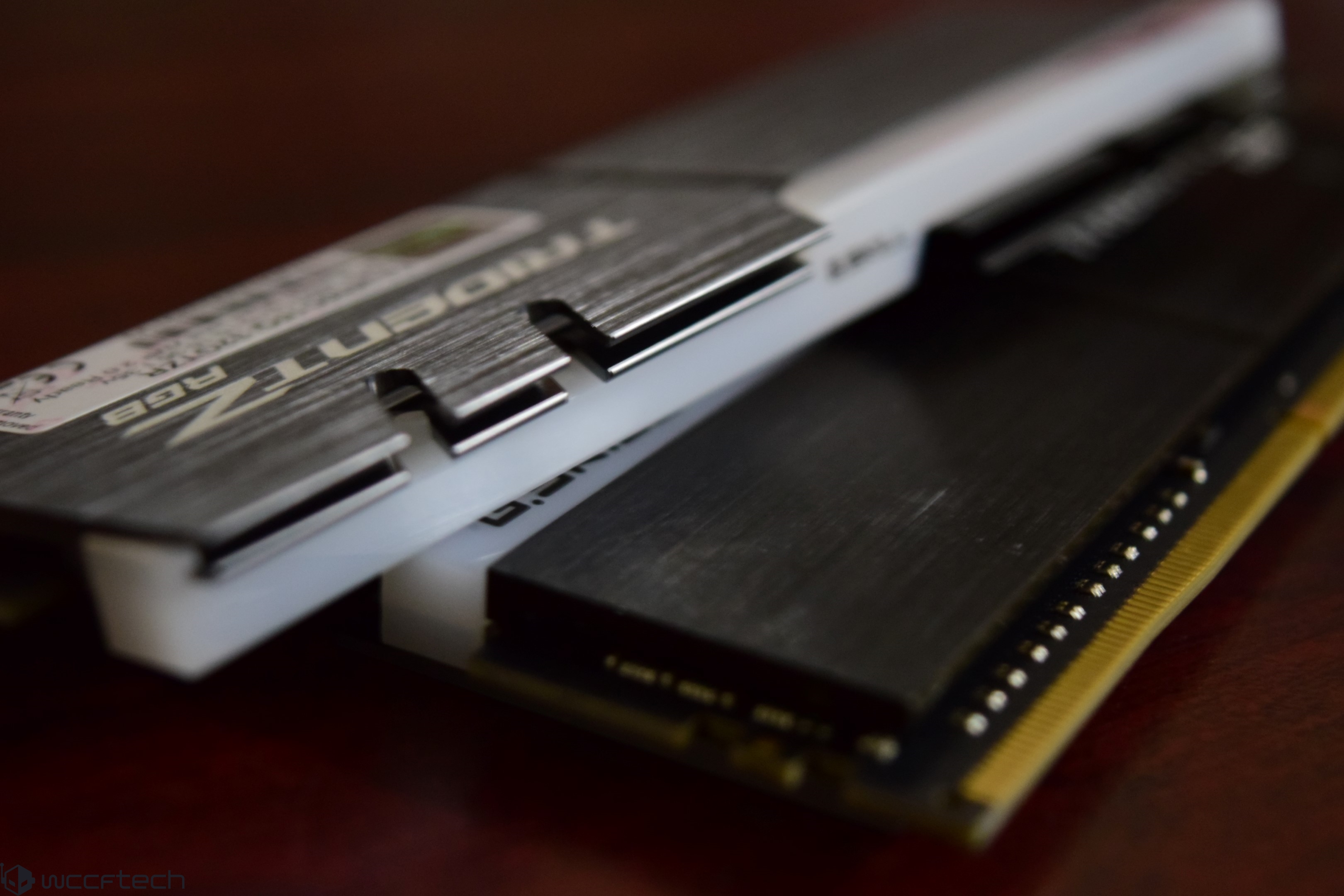 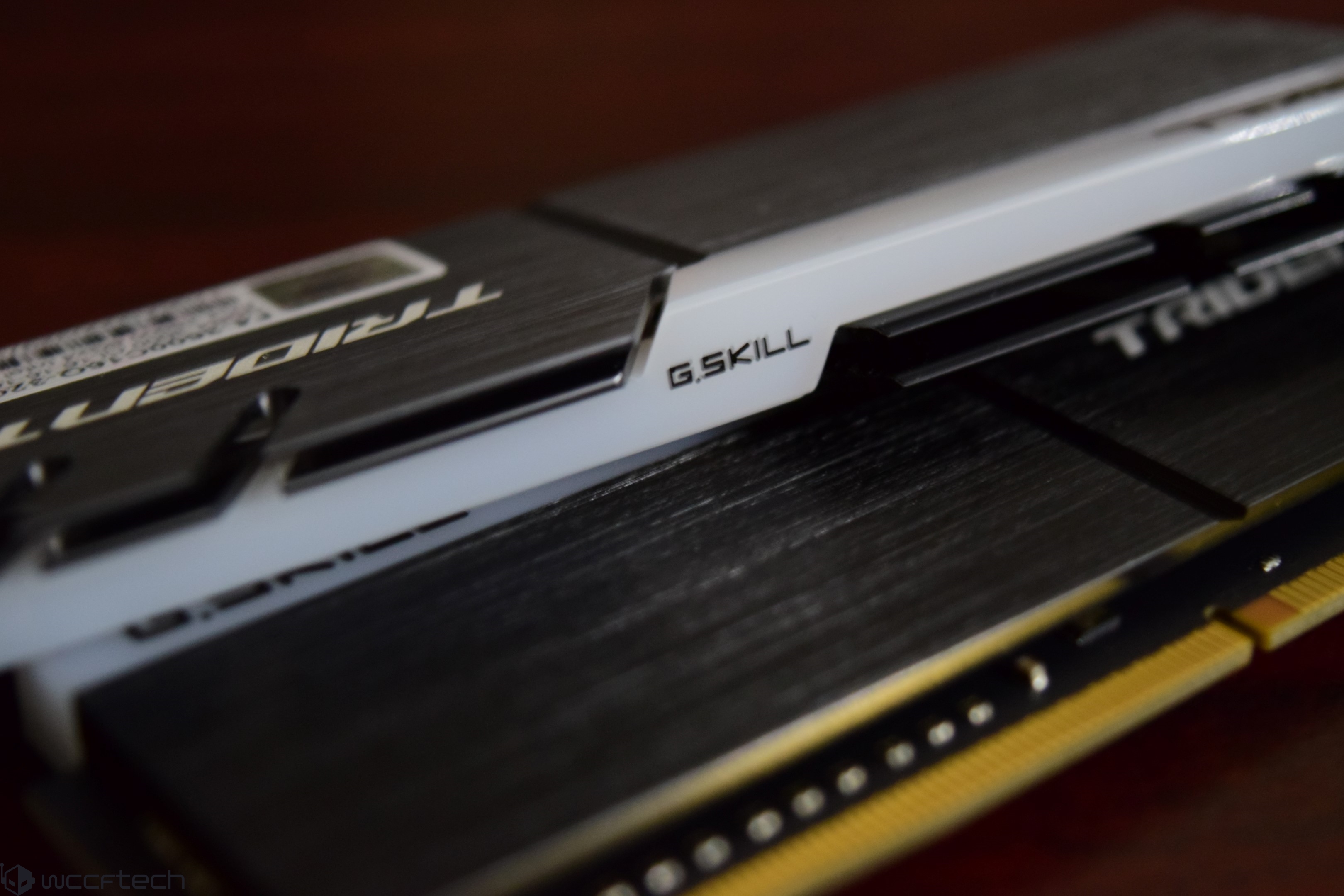 The top of the memory modules houses the RGB system. The top is kind of an acrylic cover with a white coating that hides the RGB lights underneath it. Multiple RGB LEDs reside beneath this cover and it looks aesthetically great. 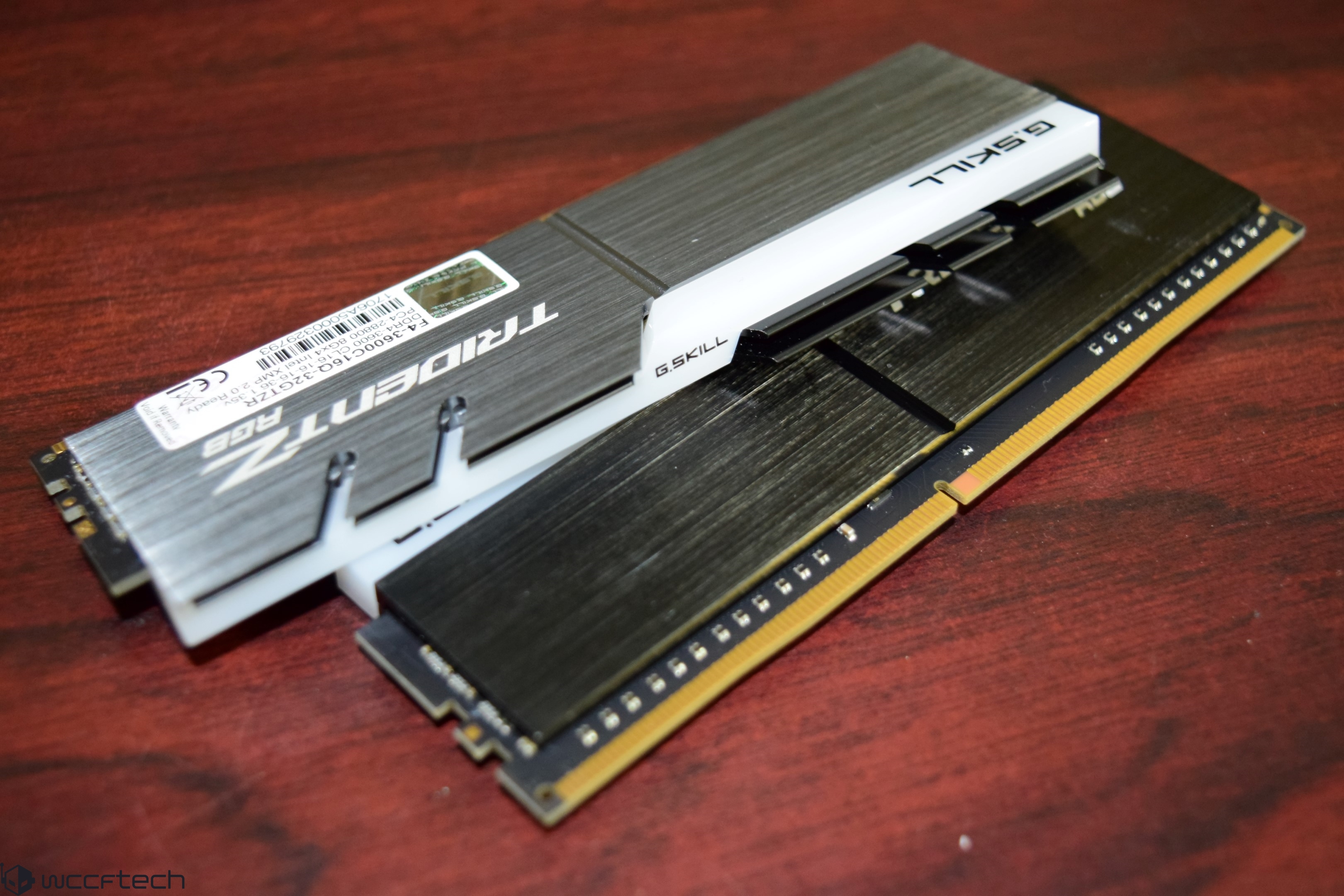 For testing, we used the latest Intel Core i7 7700K processor which is compatible with higher frequency memory like the Trident Z RGB. The motherboard used was a GIGABYTE AORUS Z270X-Gaming 8 and we booted the memory without any issues. The XMP profile to enable the 3600 MHz frequency had to be set from the BIOS which wasn't a hard task. The new 200-series motherboards are fully compatible with the fast DDR4 DIMMs. 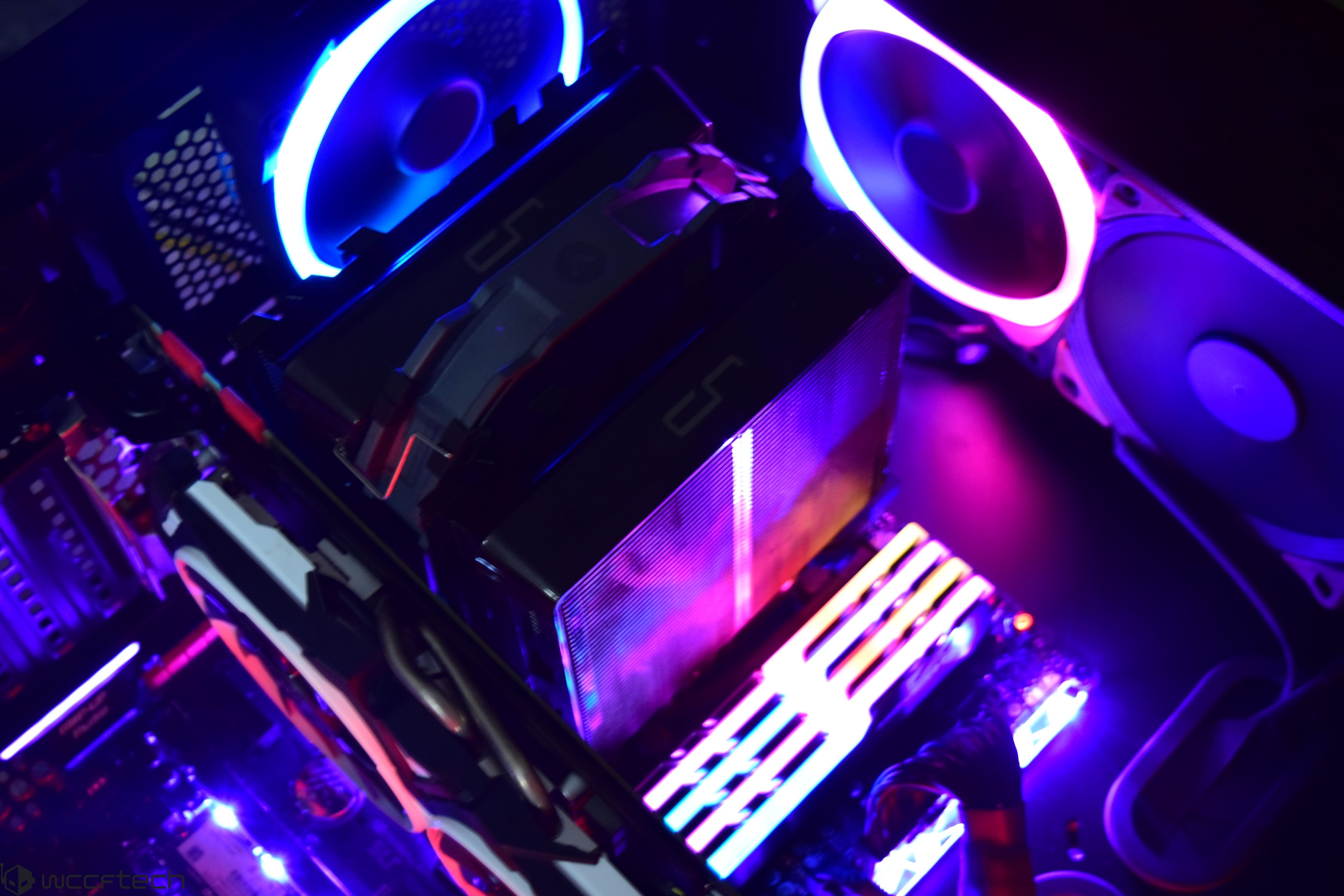 The memory kit comprises 4 DIMMs that operate in dual/quad channel mode. Since we were running a Z270 platform, the memory was operating in the dual channel while an X99 setup would have resulted in a 4-channel memory interface. The memory is clocked at 3600 MHz. Clock timing is set at 16 and the capacity is 32 GB for this specific kit. 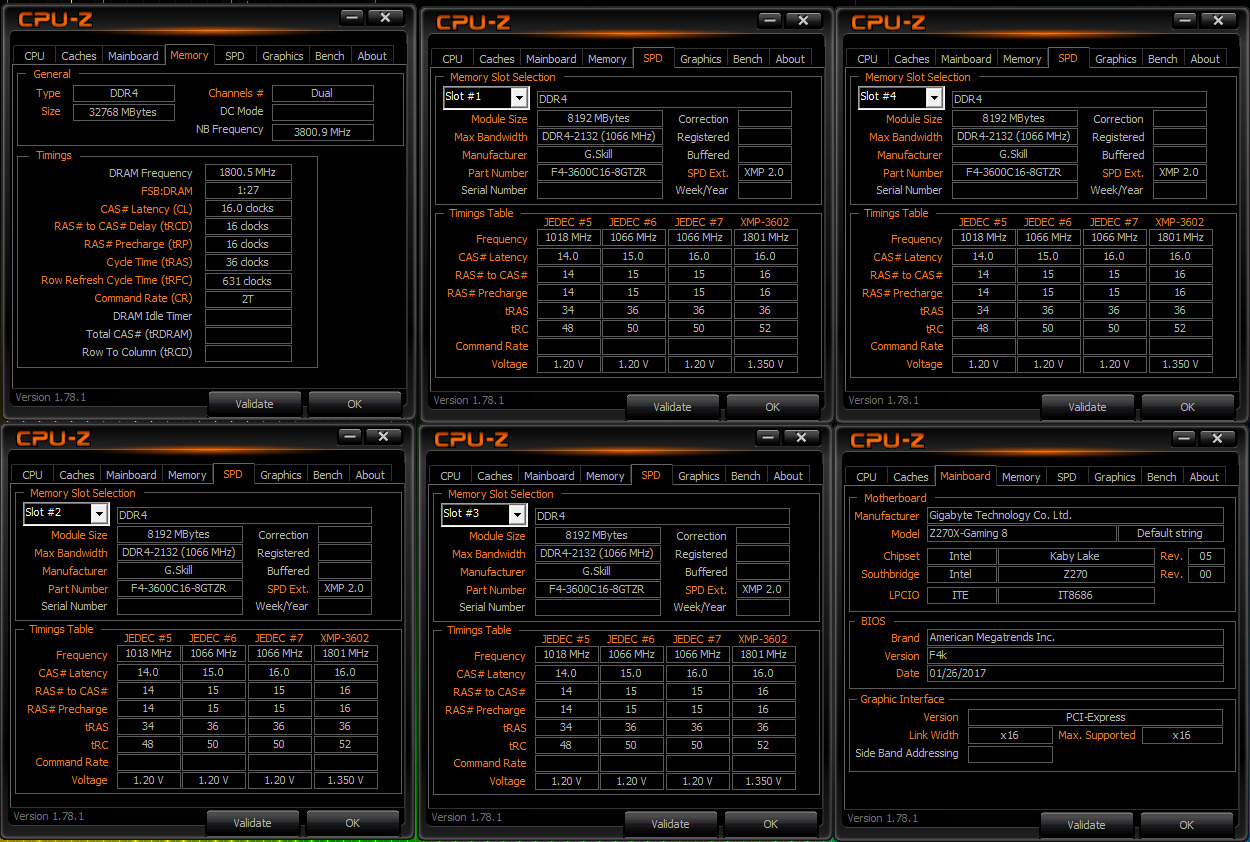 The main focus of the new G.Skill memory kit is RGB and boy oh boy, does it look great. The RGB LEDs are controlled directly through signal processing via the DDR4 memory slot. G.Skill has software known as "Trident Z RGB" which is still in infancy but does offer good support for the memory on various Intel 100 and 200-series motherboards.

The memory runs in the default "Rainbow Wave" mode when plugged in the slots. G.Skill has enabled RGB support on ASUS AURA motherboards and will later be extended to other manufacturers. We tested the kit with a GIGABYTE motherboard and while the software was a bit buggy which is to be expected due to its BETA nature, it still allowed us to run different effects on the memory.

Through the software, LEDs for each memory can be configured individually. There are a range of RGB effects and animations available along with static mode and you can also turn the LEDs on and off. 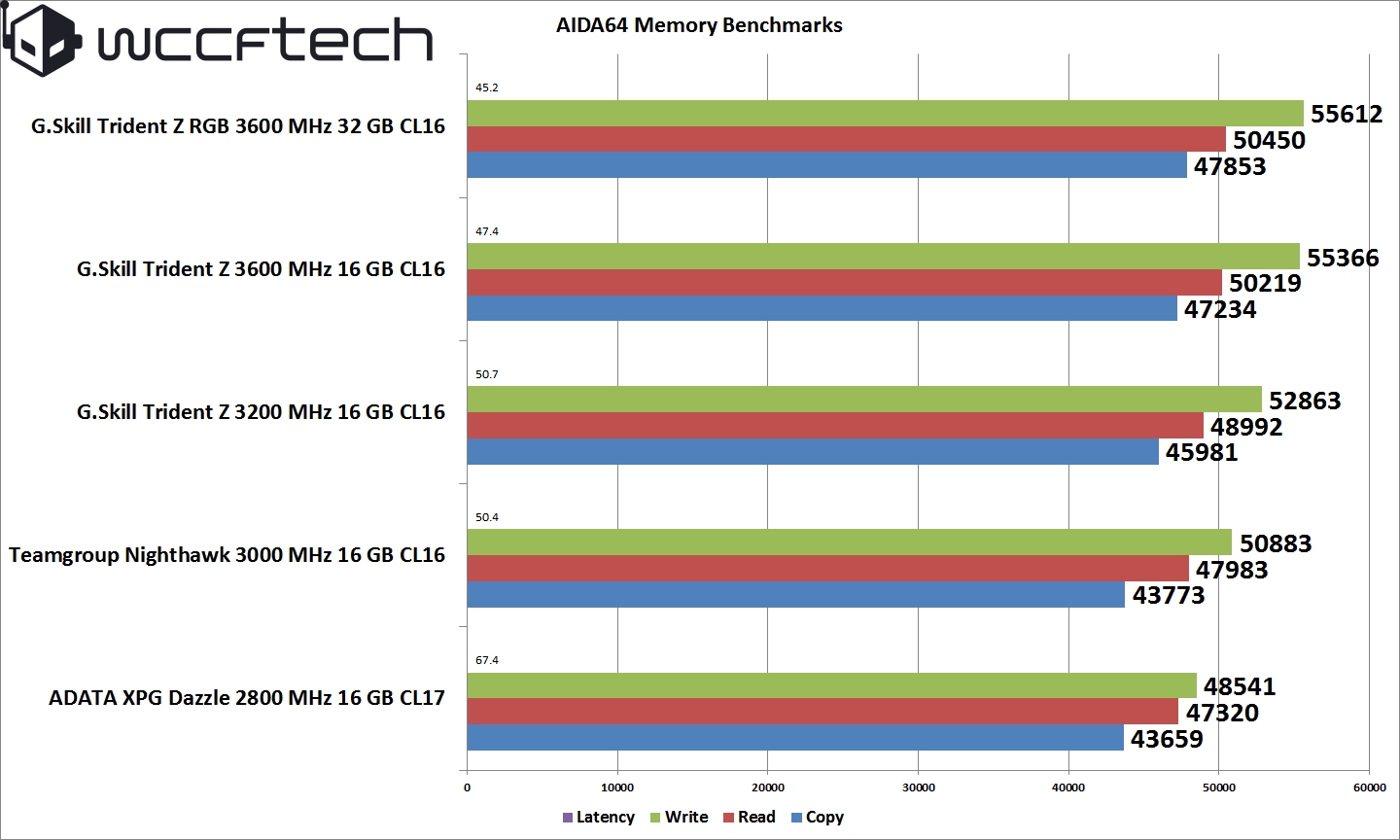 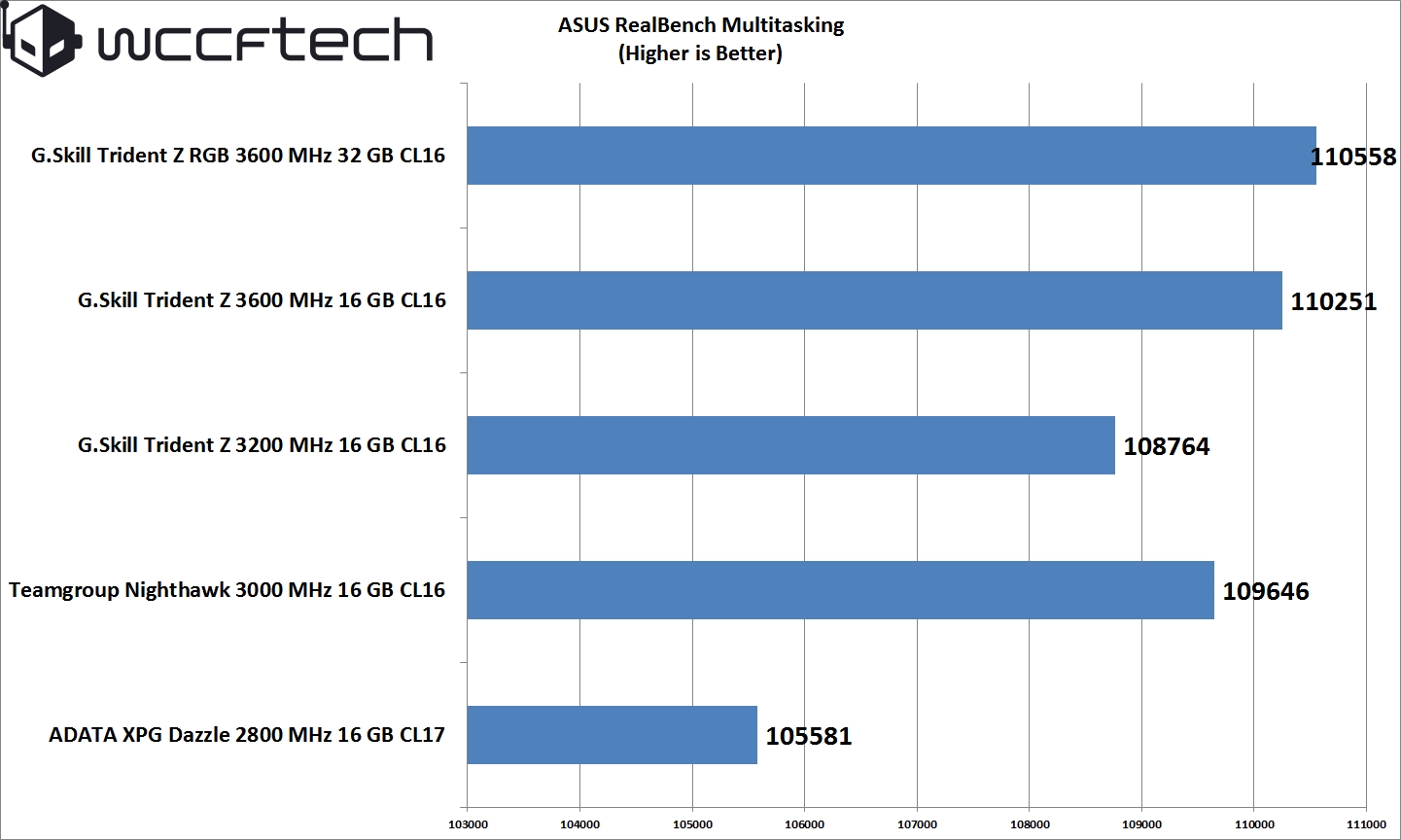 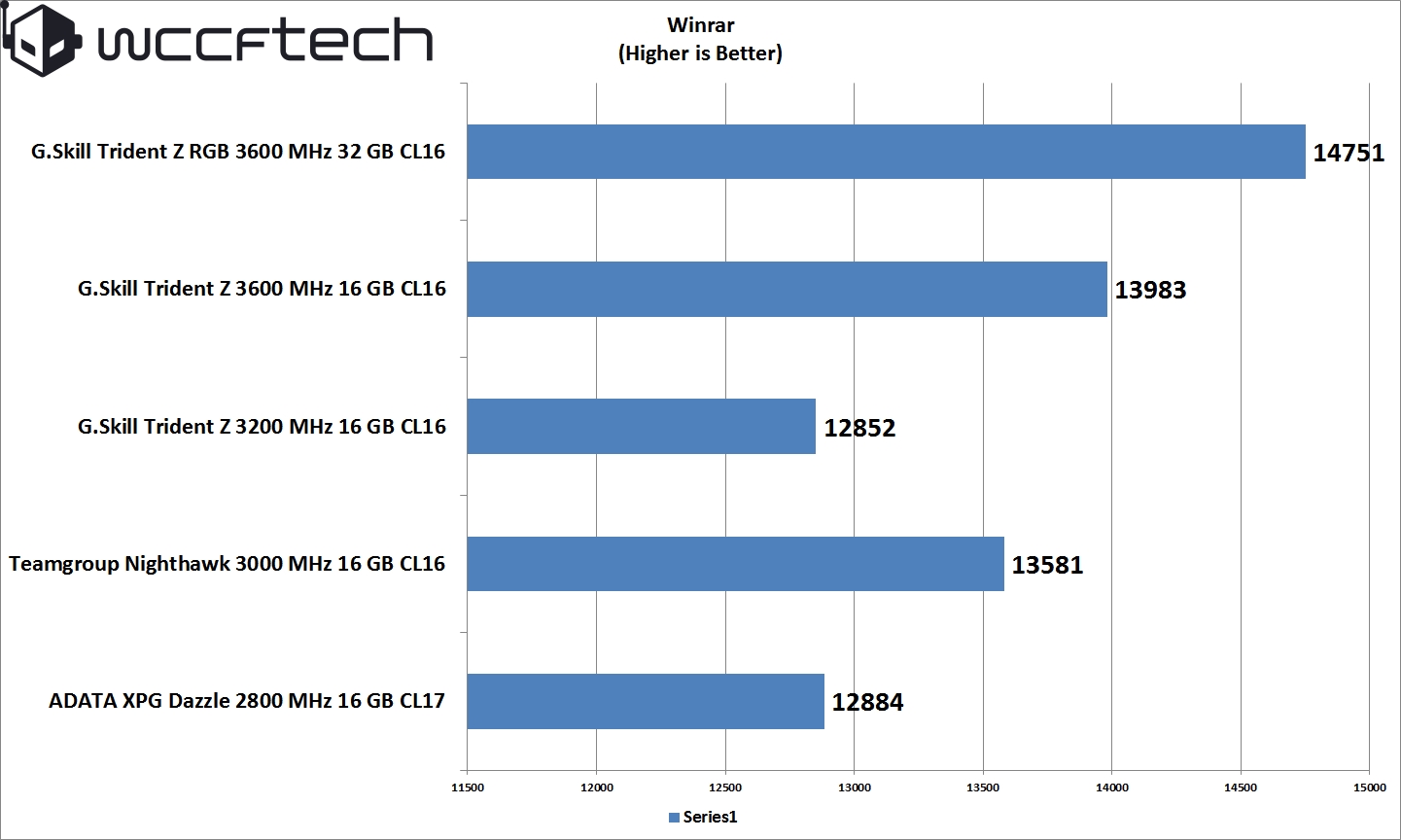 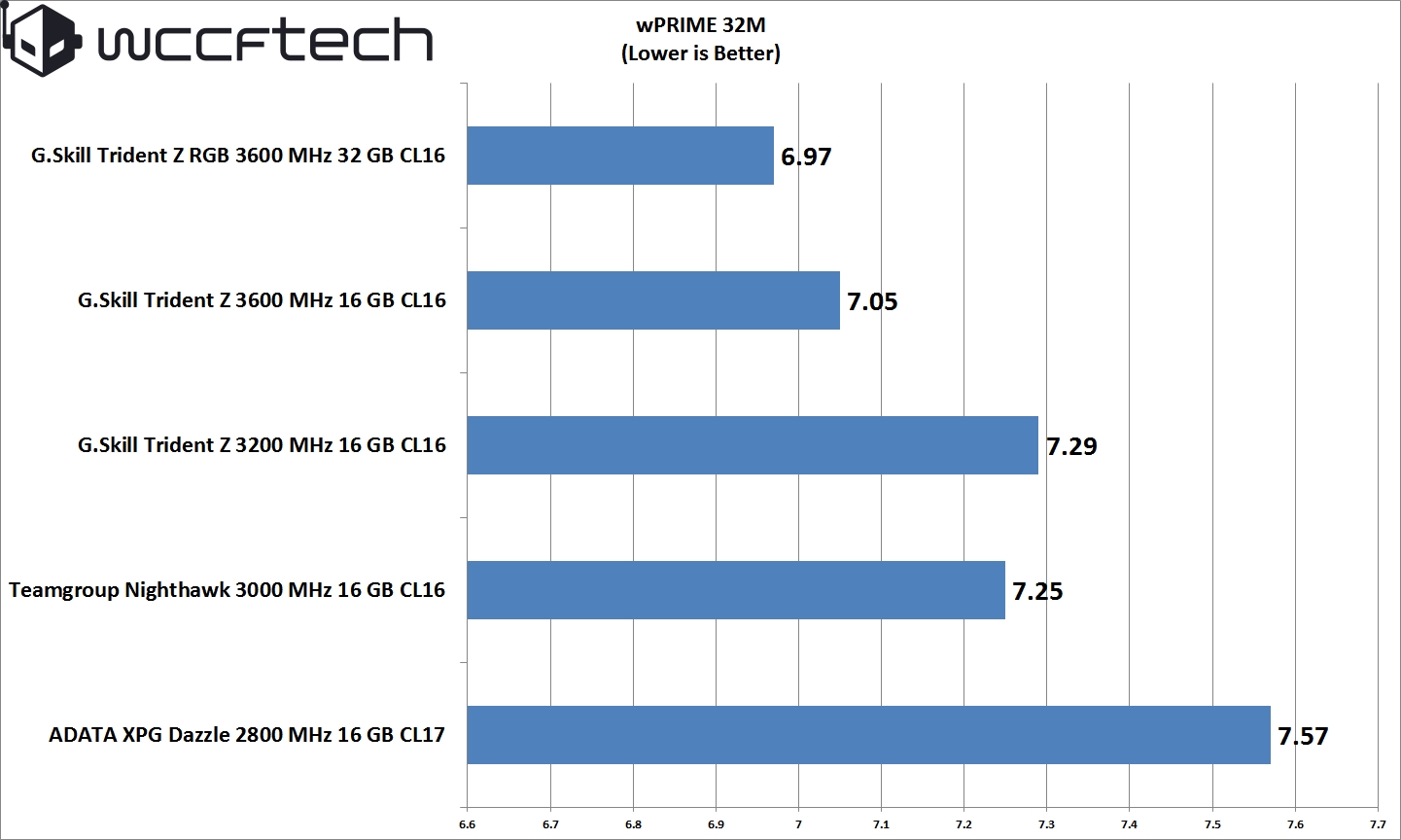 Gaming applications generally don't see huge gains with different memory kits but DDR4 has enabled a huge gain in memory frequency which can impact gaming performance. Moving from the stock 2600 MHz to 3600 MHz gained us anywhere from 5 to 10 FPS which is something that wasn't possible previously on older DDR3 memory kits. DDR4 is much mature than it ever was before. 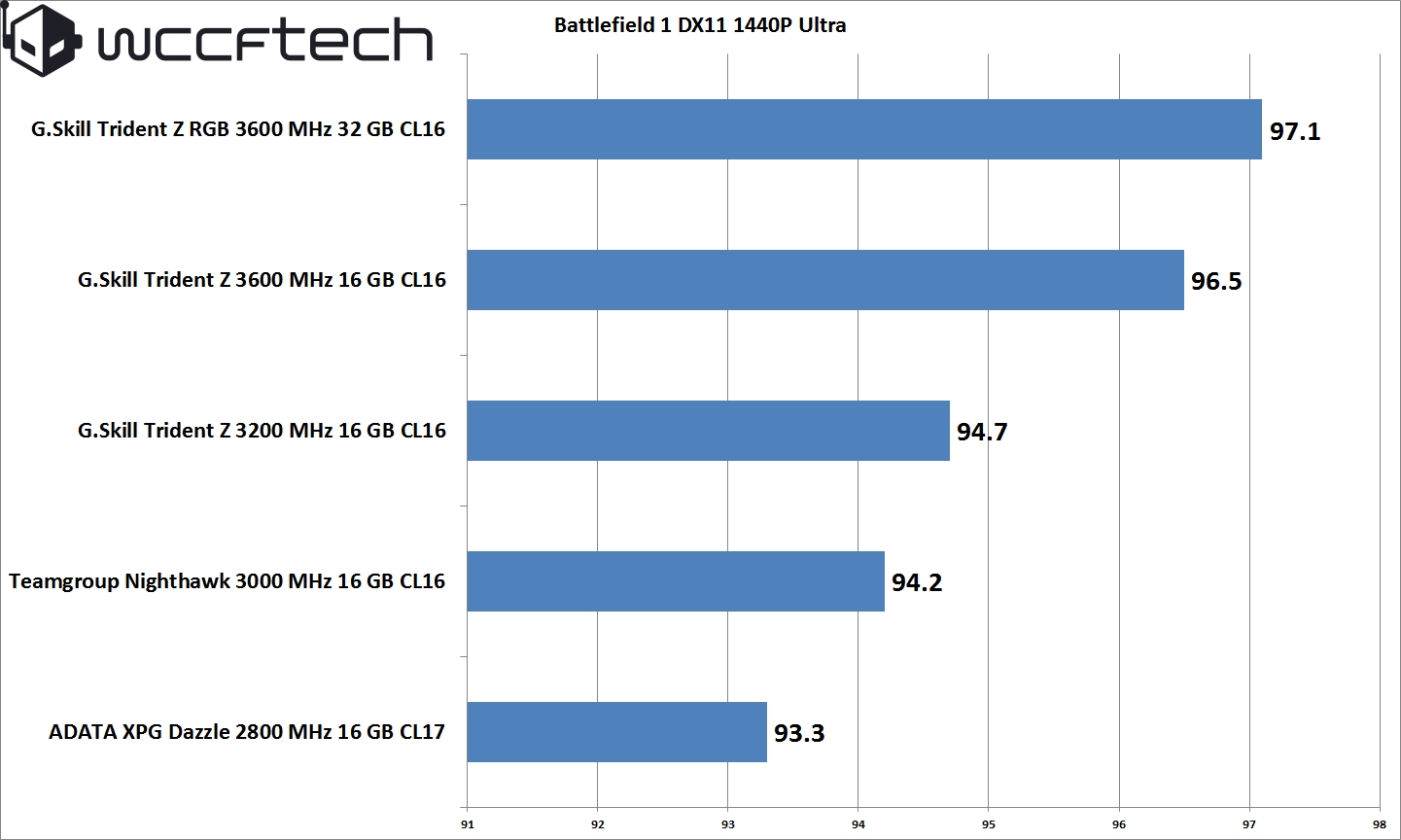 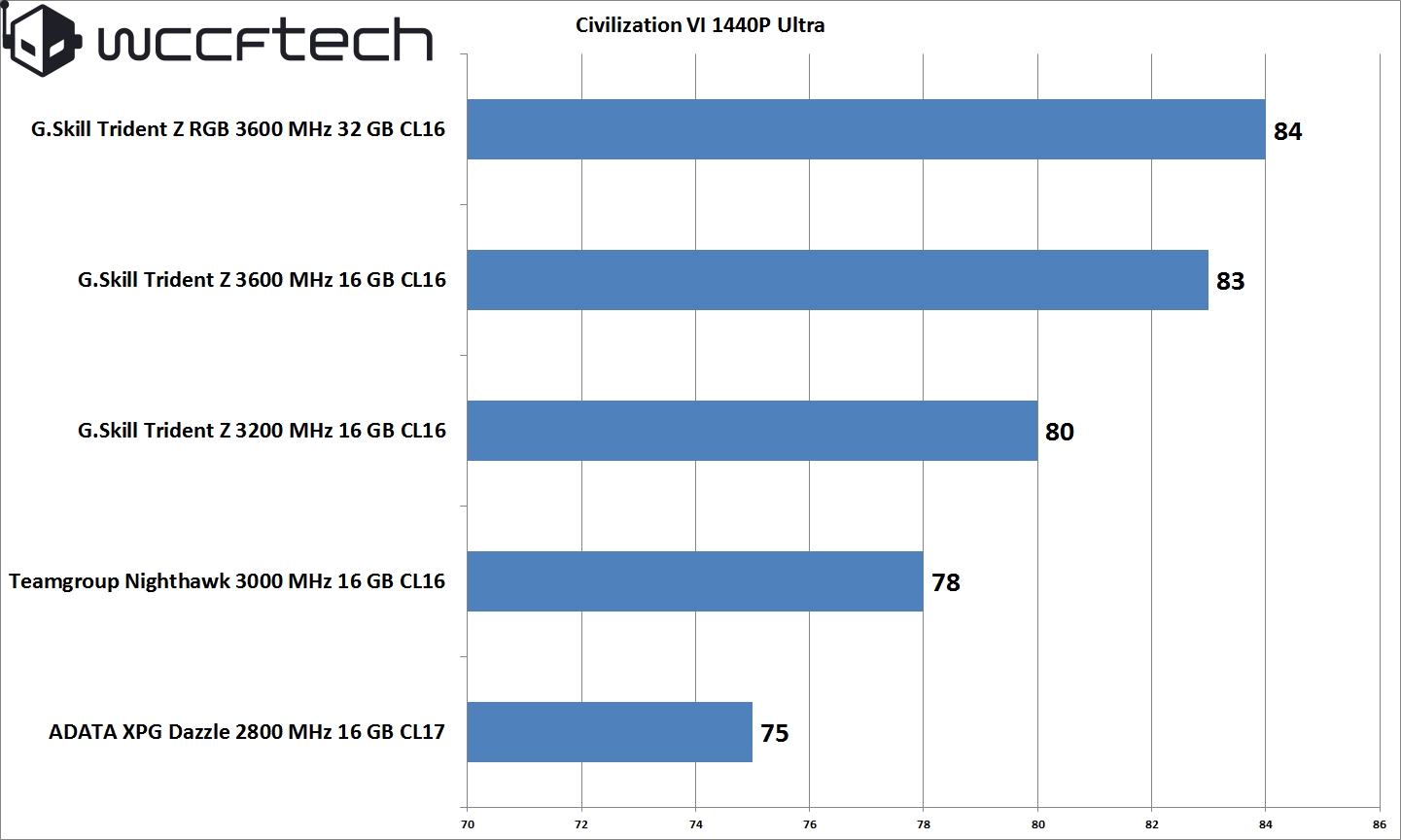 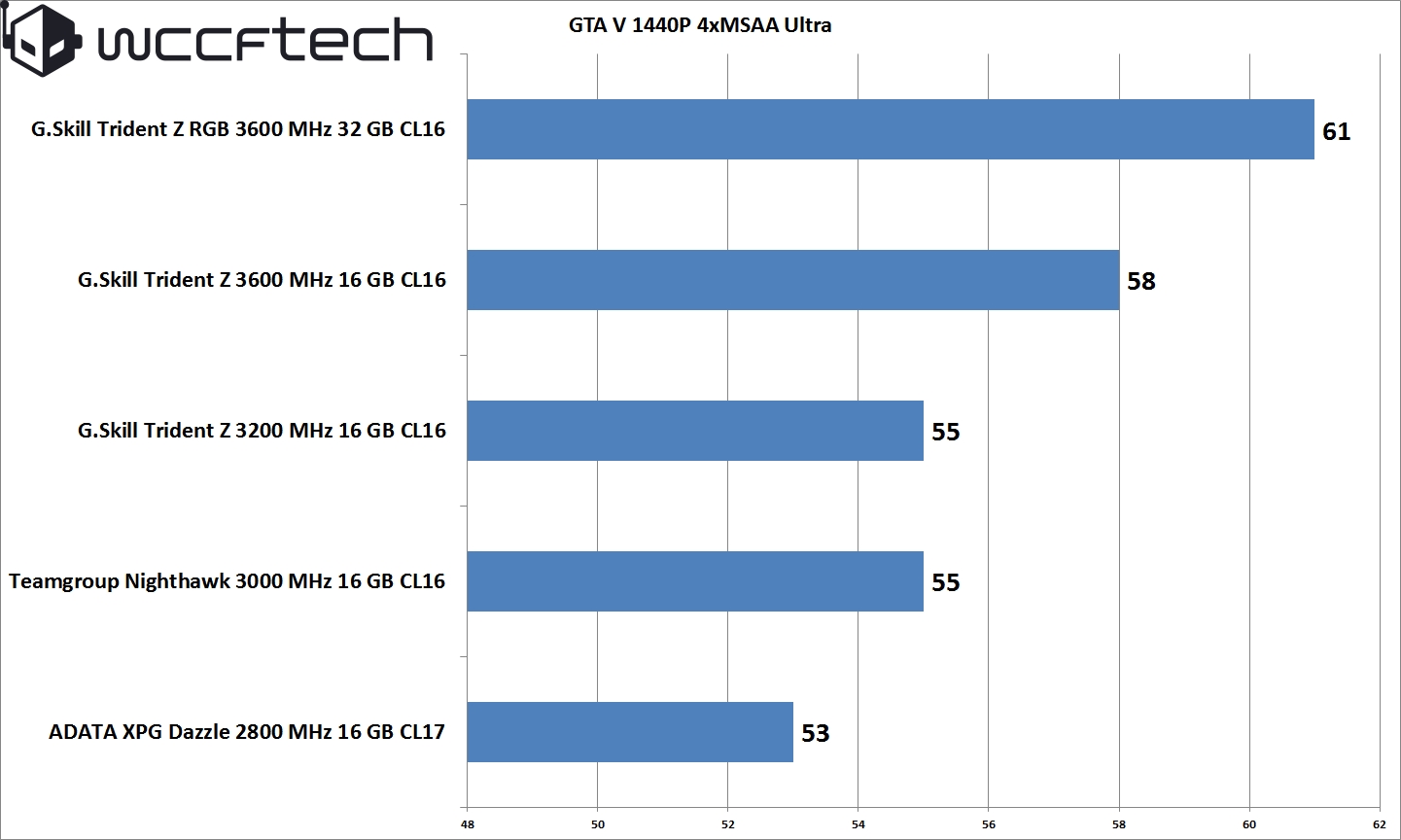 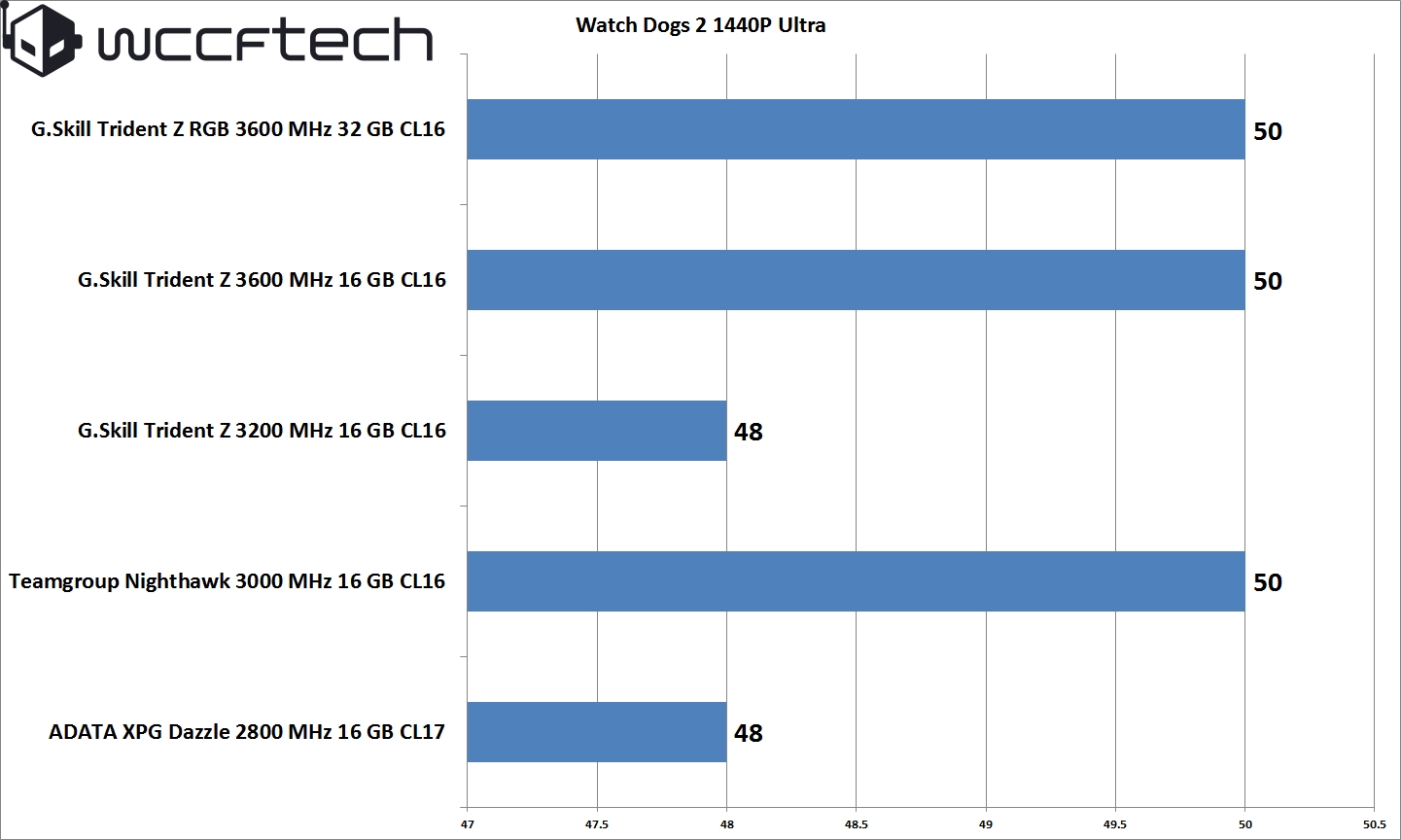 Coming to the last phase of this review, I would like to say that G.Skill has really built something out of the ordinary. Others have tried to implement LEDs on memory kits but their attempts haven't been such an eye catcher as G.Skill's new product. The G.Skill Trident Z RGB stands out from the rest of the crowd and in doing so, it looks gorgeous. The RGB trend is something of a hit and miss but G.Skill has nailed it at the very first attempt.

Sure, RGB is not to everyone's liking, but aside from looking great, the Trident Z RGB is a very solid memory kit that runs at it stated clock speeds without any issues. G.Skill has developed a reputation among the enthusiast community as a manufacturer of solid, high-performance and reliable memory. So we got a 3600 MHz memory kit, tested it on multiple Z270 boards and it ran without issue. It's still advisable to check your manufacturer if your board can run the stated speeds but Intel's XMP has it all under control.

The 32 GB kit gave me lot's of room for the test rig to stretch its legs. From video editing to the most memory-hogging gaming titles, the kit had no problem and still had over half of the system ram available even under the wildest stages. Browsing chrome with multiple tabs open (say 60+) can be a big memory hog but when you have 32 GB of memory in your PC, Chrome is the least of your worries. As amazing as it may sound, 32 GB is a bit of overkill for the regular gaming builders who won't need such high capacity memory.

This is why G.Skill has several dual and quad channel memory kits of the Trident Z RGB at various clock speeds available for users. The 8 GB and 16 GB with fine-tuned clocks and low CAS latency enable for a better experience at a lower cost. Multi-tasking users may opt for the higher capacity kits which come in 32 GB and 64 GB sizes but they cost extra.

As for the RGB software, it's still in the BETA phase with support for other motherboards rolling out soon. For now, Z270 users will be able to get the most out of the software which has an abundant list of settings to choose from. The software will be a key utility for PC modders and users who want PCs to match their personal preferences. The software did glitch out on several occasions, but we were told that it's a BETA version and it shows on G.Skill's site too that it's BETA right now, so this is to be expected and can, therefore, be forgiven. G.Skill has stated that Trident Z RGB support on X99 platform is heading out very soon as teased on their Facebook page.

Summing it up, the G.Skill Trident Z RGB series is the best DDR4 memory kit ever created. It runs solidly and has top-notch performance for a blazing fast memory kit. This 32 GB memory kit is ideal for high-end multi-tasking users and enthusiasts who want to glorify their PCs with some gorgeous RGB lightning.

The best RGB Lightning, solid performance, high capacity and a striking design, the G.Skill Trident Z RGB series has it all but for a high price.