G.SKILL does a lot to create RAM. They ensure it for quality, they add a cool design, and then they top it all off with a cool name. RAM is usually the most integral part of a system. Without the RAM, there is no place to store the little zeros and ones that your CPU processes like a crazed maniac. Without it, procedural textures would have no home, and games would be really boring. Today we review the G.SKILL Ripjaws 4 16 GB DDR4-3000 MHz Memory Kit, which is rated at 15-15-15-35 at v1.35v for some supreme PC4-24000 action. Is this the premiere league of DDR4 needed for your next-gen platform on the Haswell-E line? Let’s find out. 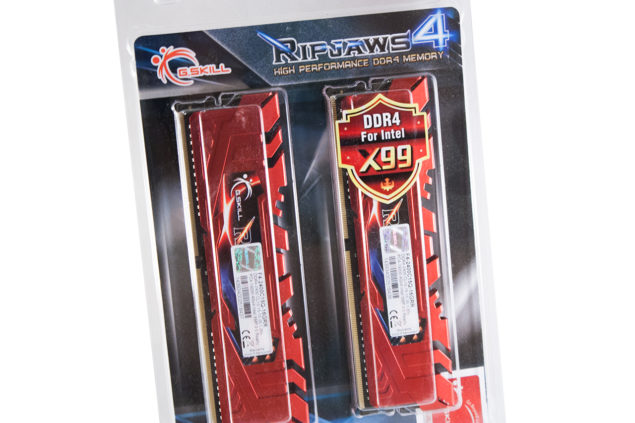 The G.SKILL Ripjaws 4 16 GB DDR4-3000 MHz Memory Kit comes with a lot, for starters – it’s 3000 MHz speed and low voltage marker is some of the best in terms of DDR4 memory right now. This is a great achievement by memory makers. The years of DDR3 research has paid off and the starting lineup already feels like it has the stability that comes with knowing something has been in the market for a long time. With tons of features, I am certain the G.SKILL Ripjaws 4 16GB will be a lot of people’s go-to DDR4 RAM in the market.

The specifications are as follows:

The Ripjaws 4 series memory kits above 2400MHz support Intel XMP 2.0 for automatic and trouble-free tuning. Working closely with the major performance motherboard partners, Ripjaws IV series DDR4 memory are validated for compatibility with most upcoming X99 motherboards with a series of rigorous tests under quad channel memory operations. It is guaranteed to provide the best-in-class performance, compatibility, and stability with a wide range of X99 motherboards. G.SKILL is really trying for it.

Sure, I hear you. DDR4 is a new platform! It can’t be as good as or better than DDR3. Not a chance! It IS better and it’s here to stay. Also the years of DDR3 have given these companies just the right amount of R&D to develop something that pushes bounds (even if a little) and make strides with time.

You bet. You can damage your DDR4 like we did! (Just kidding, please don’t). All G.SKILL memory products come with a lifetime warranty and the G.SKILL technical team is always ready to provide consumers with complete technical support via online forums, telephone and email.

G.SKILL Ripjaws 4 16 GB DDR4-3000 MHz Memory Kit is a double-sided monster that comes out to 135.8 mm at the length of its heatspreader. Now while overclockers might not be happy with this decision since the signal integrity may be weaker with the added ICs, consumers could not be more happy for this decision which allows for less heat as a result on one side of the DIMM. 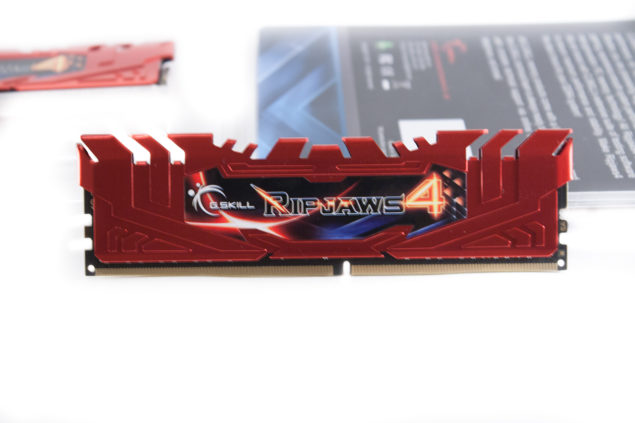 With the red heatspreader design with the little shark fins at the top, the G.SKILL Ripjaws 4 16 GB DDR4-3000 MHz Memory Kit stands out in style here. The design seems to be intentional and something G.SKILL really tried to keep true to their TridentX DDR3 series, while also making it look more stylish and new. You can see that the fins allow for a greater surface area, and also allow the RAM to have greater cooling capacity than your usual square modules. The 288-DIMM module pin placement on DDR4 is also much closer together, where each pin is varied in shape to accommodate signal layers in the IC stacking modules. 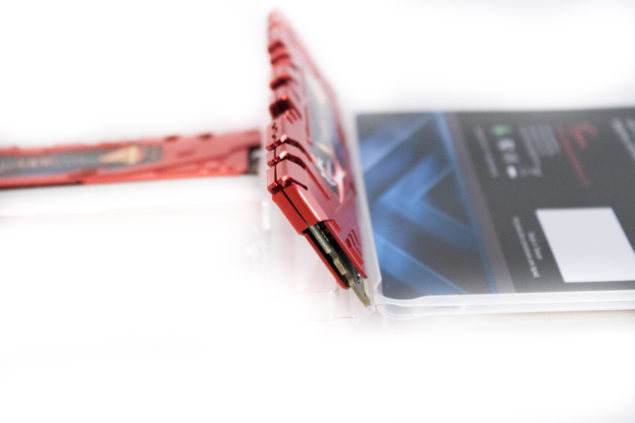 Now one thing most people will notice that DDR4 does not borrow from is TridentX’s ability to remove that heatspreader. I know, liquid nitrogen overclockers are probably heartbroken – but it’s not an issue for consumers. Most of the DDR4 metal profile is slimmer than the DDR3. G.SKILL ensured that this would smooth over for fans of custom aftermarket coolers, and it really does fit on the most oversized ones (I have yet to test Noctua fans but I can vouch for the V8 GTS).

We tested the memory kit on a bench test platform with the i7-4770K and the i7-5280K and compared this to the highest DDR3 offering by G.SKILL (this just makes the most sense than flooding the benches with a bunch of RAM). 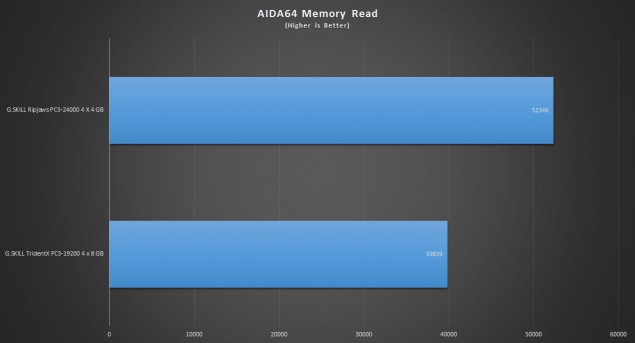 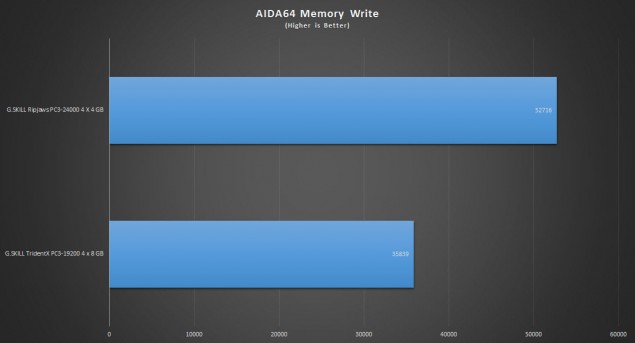 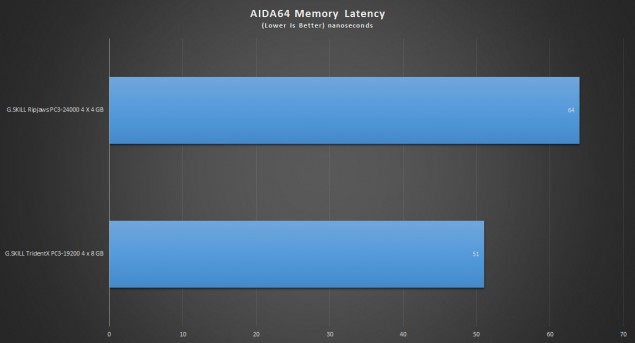 The memory averaged write speeds of 52,000 MB/s - 54,000 MB/s write speed on average. This is a giant leap over DDR3 in terms of the synthetic benchmarks. I thought DDR4 would only be slightly better than the higher-end DDR3's but these tests really show that in terms of the highest offerings, there is a noticeable and upgrade-worthy leap in terms of write performance. Obviously having faster anything allow for more future-proofing and keeping ahead with the times (even if games do not necessarily benefit from the added speed buffer).

SuperPi is a fancy program that calculate Pi to a certain amount of digits and is very memory and processor heavy. 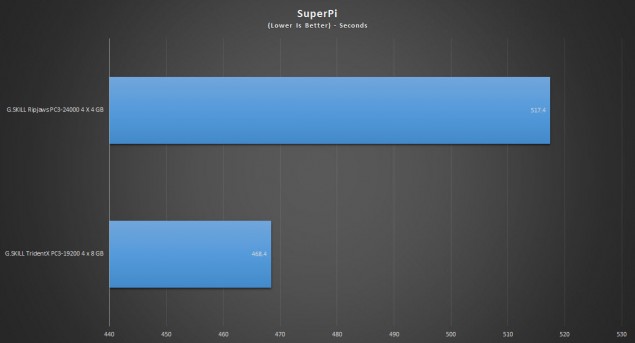 x264 HD Benchmark is a benchmark that allows you to measure how fast your PC can encode a 1080p video clip into a high quality x264 video file. It allows for an easy comparison because everyone running it will use the same video clip and software. This is a nifty AVCHD test that really stresses memory caching for temporary video files. 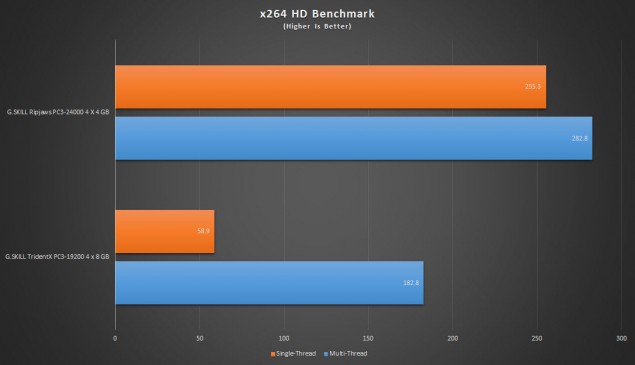 CINEBENCH is a real-world cross platform test suite that evaluates a computer's performance capabilities. CINEBENCH is based on MAXON's award-winning animation software CINEMA 4D, which is used extensively by studios and production houses worldwide for 3D content creation. Nothing says memory/processor/graphics testing than Cinebench. 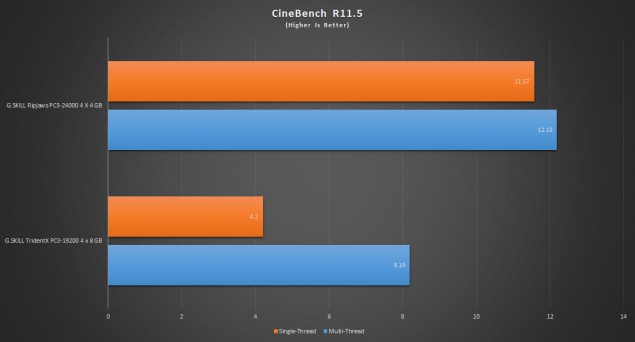 Cinebench results reveal that the Trident DDR4-3000 16 GB Kit comes out on top in both single-threaded and multi-threaded CPU result applications. It performed exceedingly well at Single-Threaded raytracing and the last generation offering does not come anywhere close to this guy.

Isn't it just fun to archive things super fast and save a few MB's in the process? Well, the WinRar benchmark utility allows users to test out their memory's write performance while also seeing their processor's performance in tandem. 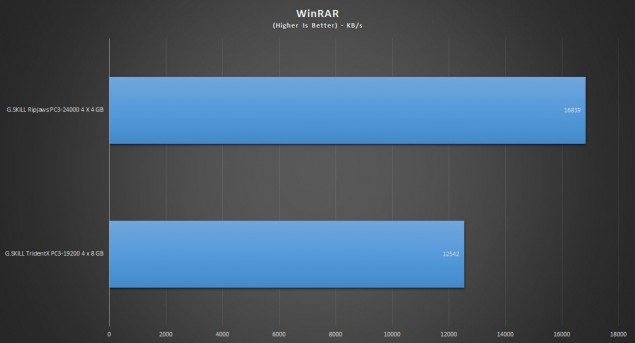 Handbrake takes mkv files and converts them to mp4, which is very handy if you want to watch files on the Xbox One or the PlayStation 4 that are not XVIDs or are even high quality Blu-Ray personal rips that chug on .avi format and the usually unsupported MKV file format. 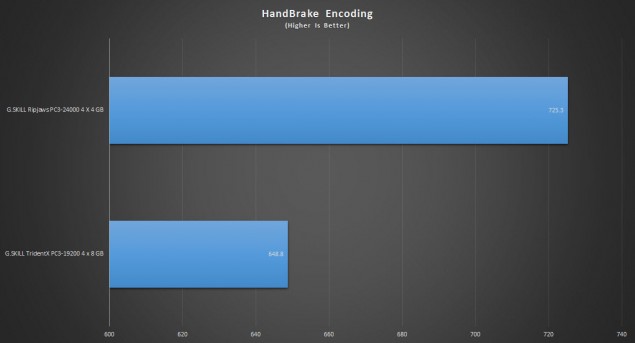 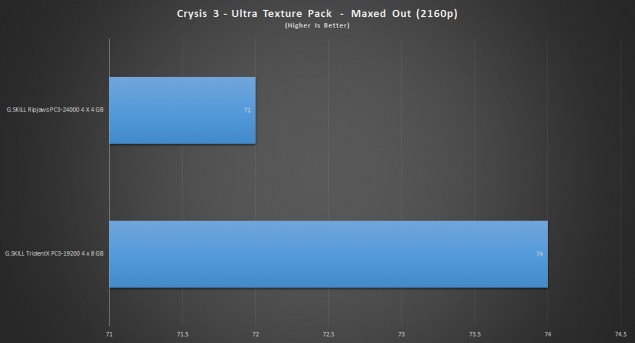 Now the above result is the most interesting. The result shows that when it comes to real heavy RAM usage (in the case of the ultra texture pack in Crysis 3 - your FPS is seriously affected by the amount of RAM you have, not the speed. So obviously I am sure if we had 32 GB DDR4 - this would be negligible.

In memory – latency is the biggest deal for anyone. The DDR4 has a lot of latency (about close to 50+ ns). This was surprising, even though it outperforms last generation RAM. What is latency? It’s essentially how quick your RAM responds to load operations in an amount of certain time (nanoseconds) and it’s a combination of timings, the memory controller speed and quality, along with the frequency chosen. Compared to DDR1 – we have not really progressed too heavily in the field of latency. When older Opteron memory had latency of 37-38ns, we still see the same latency in the majority of DDR3. While this is true, the amount of processing power is what changes in DDR4 RAM along with that speed despite high latency. 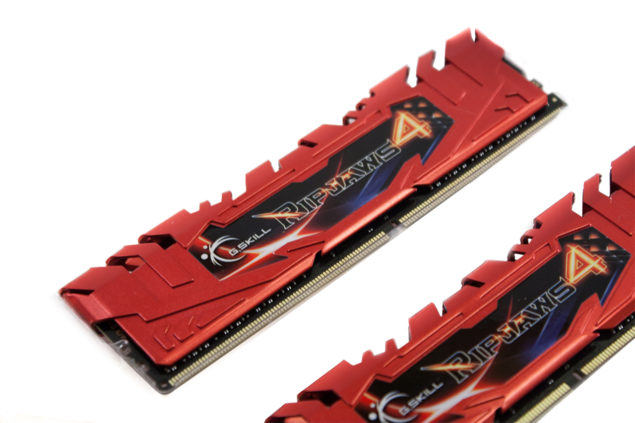 Sure the latency has not progressed much or hardly at all, but most memory manufacturers are aiming to push for that speed increase as the battle of latency is a tricky one and still requires further research. One thing is for certain with newer platforms: the latency will probably be higher (as we have seen) to start, and as time goes on as it did with DDR2 and DDR3, everything will get tighter and be slightly faster on a bigger bandwidth capacity. This means the memory controller bus width is bigger per stick along with bigger internal banks per module (which is about the only change to DDR4 from DDR3). Remember folks, it’s about bandwidth/capacity at the end of the day, speed and latency really are the second and third priority. In light of this, the G.SKILL Ripjaws DDR4-3000 16 GB Kit performs exceptionally well and it can only get better from here.