Crate Entertainment’s dedication and passion for the action role-playing genre certainly shows with the recently released Grim Dawn for the PC. Years of pedigree in the genre have culminated in a new title that takes the conventions of prior titles and mixes them fluidly with mechanics to create a project that feels familiar, yet undeniably fresh.

The setting of Grim Dawn draws not from previous works under Crate’s belt such as Titan Quest, but rather a dynamic based upon equal parts Essex County, Massachusetts and the unsavory Wild West. The first glimpses into the world of Cairn matches that of a Salem Witch Hunt; a reluctant hero finds themselves possessed by an otherworldly spirit and nearly hanged by those wishing to keep peace in the town of Devil’s Crossing. 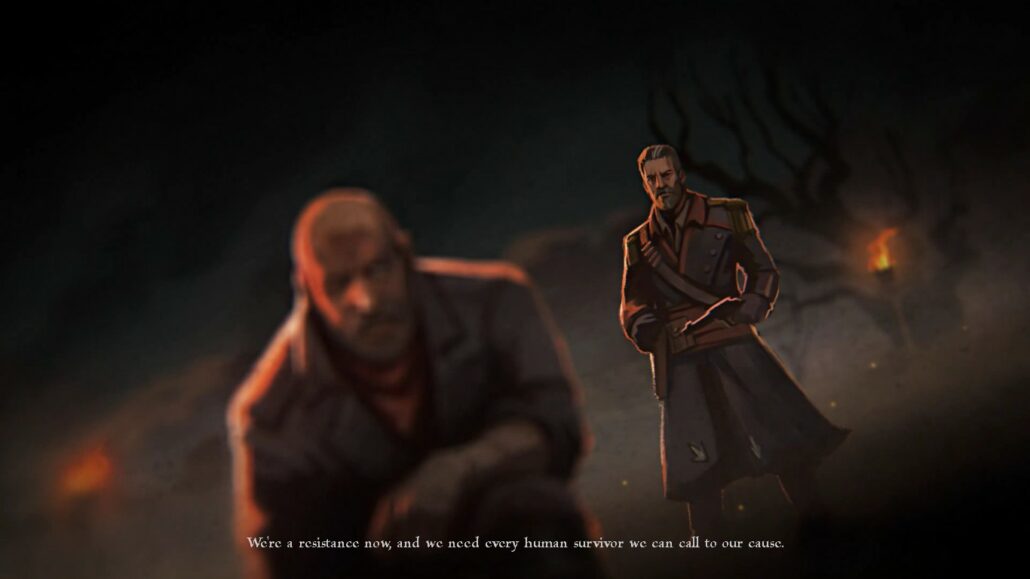 Upon being liberated from the gallows and given the chance to properly set foot in Cairn and destroy the walking dead just outside town, players pick from one of six classes and work towards unlocking the specialties of that particular class through the constant addition of skill points with every level increase.

What sets Grim Dawn apart from its contemporaries is the addition of dual-classing, giving players the option to pick a second class and working their masteries in tandem to create unique skill synergies. My personal favorite combination through my hours in the world of Cairn was the fraternization of Demolitionist and Occultist, resulting in a unique Pyromancer class that laid waste to anything in its path through the use of dual-wielding pistols and various elemental damage buffs. Being able to freely customize two classes into a single powerhouse gives players much greater freedom with adapting a build to their playstyle, and as the game is continuously patched, new viable skill sets are popping up frequently. 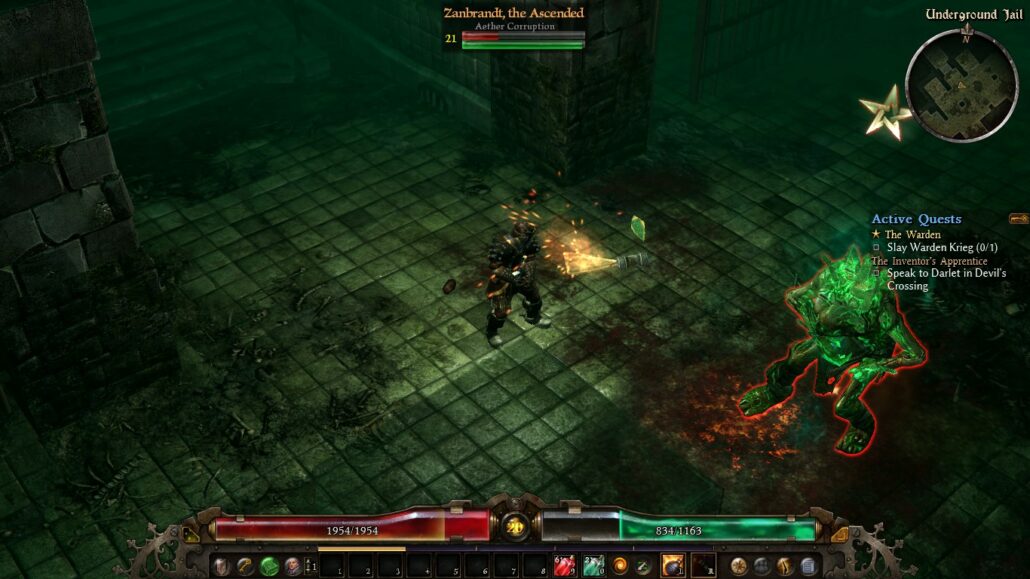 The core gameplay to Grim Dawn should feel familiar to those that have played at least one previous entry in the action RPG genre: click on enemies to kill them, pick up loot and shiny new gear to kill them faster, and repeat as damage and stats on gear increase as the cycle begins anew. Crate Entertainment has taken some creative liberties with the loop and added some general enhancements. Gone is the need to click endlessly to murder groups of fodder and enemies: Grim Dawn offers a smart targeting feature where a single mouse click can be enough to clear out entire swaths of enemy raiders. With thousands of enemies to dispatch in that hunt for greater loot and higher character levels, that’s sure to help increase the longevity of anyone’s gaming mouse.

Much like the previous Titan Quest, there’s a wide breadth of landmass to explore in Grim Dawn. Without the randomly generated maps of other similar titles in the genre, there’s a good reason to learn and get accustomed to carving paths through the world. Getting familiar with the world was a refreshing change and I routinely found myself stepping off from the beaten path to seek out more powerful competition or just one of the many secrets scattered around Cairn.

In fact, one of the entire sets of character customization perks is locked behind such secrets of the world. Littering the map of Cairn are a number of locked shrines, each separated across the different difficulties. Players can attain a total of fifty devotion points by unlocking the power of these shrines, so there’s a valid reason to go out exploring without worrying to gather up every single shrine if unlocking them proves to be too difficult. Gathering up devotion provides an extra backbone to the skill of your character, with bonus perks ranging to stat and damage type increases all the way to unique abilities that augment the skills granted by other classes. 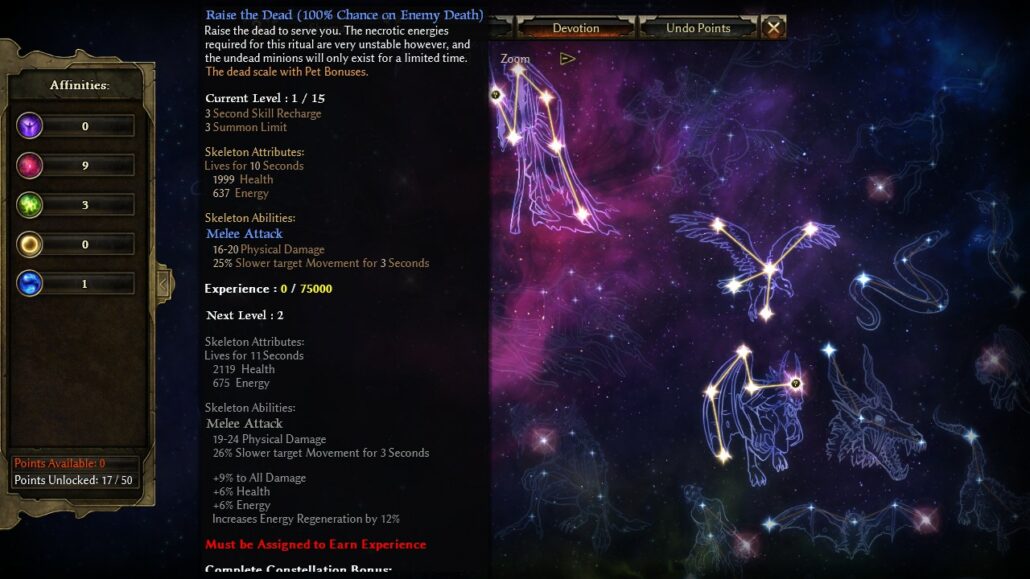 Loot has always been what really keeps my interest in the genre. Seeing the numbers of my routine attacks and combos scale up over time gives a sort of glee that directly correlate with the enjoyment I draw from the gaming experience. Grim Dawn never feels like the loot is coming at a drip feed and newer and greater gear can only be a click away. Blue-colored gear (Crate’s answer for the Rare loot, the first tier of unique items) appeared frequently enough that I never felt like I was working too hard without anything to show for it. While there would be pieces that didn’t feel suited for the way I played or needed a higher Physique stat than what I was working towards, all of that loot would be ferreted away in the communal stash for the next character class I’d feel like working towards.

Among Grim Dawn’s best items to be discovered are also Legendary and Set pieces, both terms that should feel familiar to those that have experienced other titles in the genre such as Diablo. Set items are a special class of goods that all stem from the same family of armor and confer special bonuses for those that seek out multiple pieces of the matching set, giving players more reason to aim for particular goods rather than mixing and matching freely. 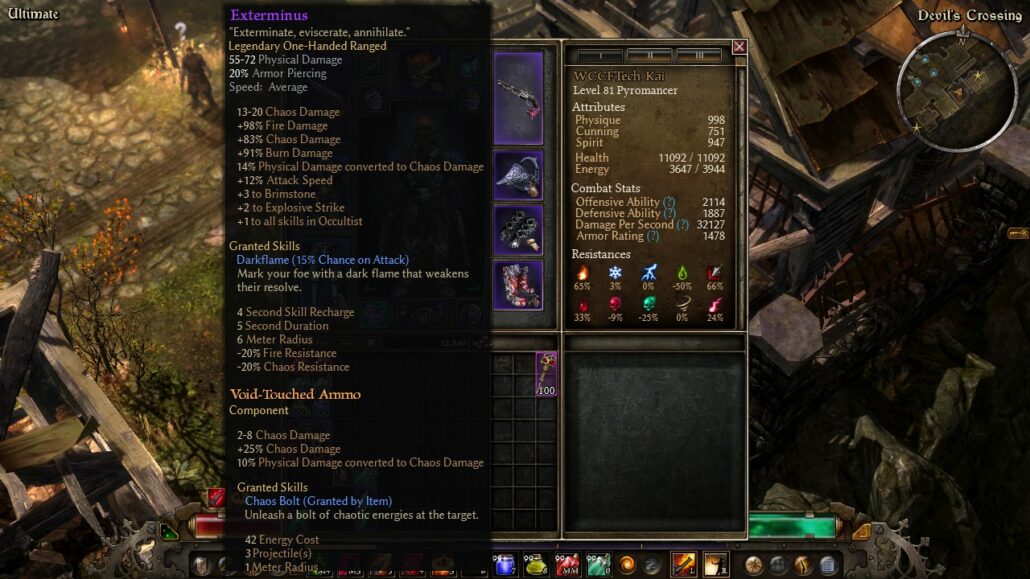 The Legendary items to be discovered in Grim Dawn bear an imposing purple name and never fail to make my heart skip a beat. Sadly, these unique pieces of gear won’t make their way into players’ hands until at least level 50 if only to keep the game’s balance from being overtaken by a particularly ‘godlike’ piece of gear. The days of seeking out early-game pieces of gear such as Diablo’s Nagelring are long gone, instead replaced with a more consistent flow of continuously upgrading and swapping out pieces of gear.

The game is based on Titan Quest's engine, so it's hardly surprising that the graphics do not shine as bright as some of the most recent ARPGs. However, that also means the system requirements are really quite low and you should be able to play this game on any PC built in the last six years.

The art is pretty good overall, though, and there's also a dynamic weather system that makes the world feel a bit more alive. 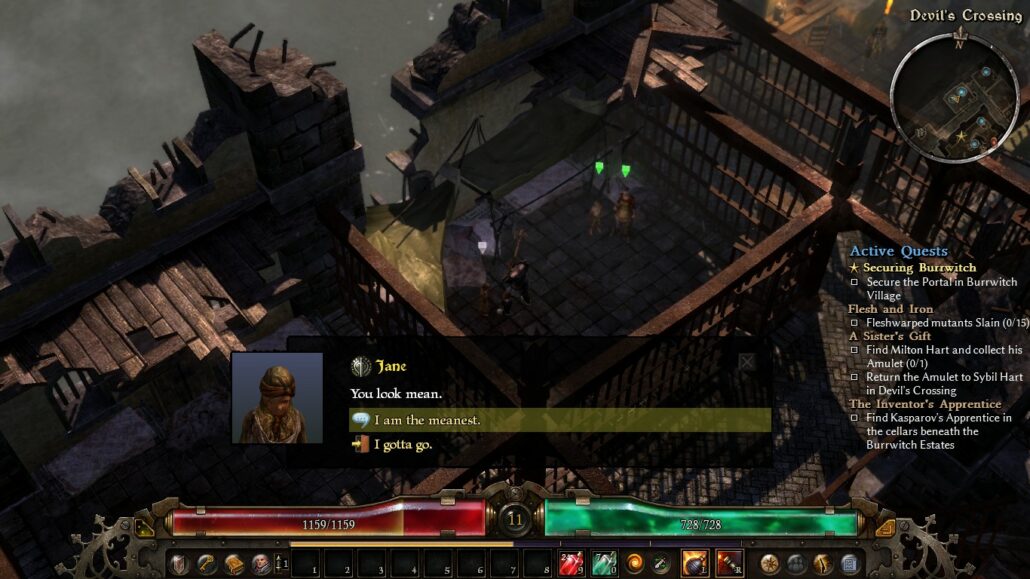 Grim Dawn has come a long way since its initial reveal nearly six years ago. While rooted in the foundation laid by its contemporaries, there are enough modern advances to keep the experience feeling interesting. In a genre dominated by games that rhyme with ‘flow’, Grim Dawn continues to find ways to appeal to veterans of the action RPG formula while simultaneously becoming a solid starting point for anyone looking to start gathering up legendary loot of their own.

As with any game in this genre, Grim Dawn is at its best when you can play it with some friends in multiplayer (up to four players). The developer is also planning to add mod tools at the end of April and then a Survival mode, an expansion and possibly even more; longevity isn't going to be an issue, that's for sure.