Today, we are testing the Gright HD7I tablet which features Intel's Clover Trail Atom processor. While the tablet measures at 7.0 inches, it also comes with a sim card essentially making this the Phablet from factor which offers functionality of a mobile in a device that measures as big as any regular tablet.

The tablet comes straight from Gright, one of the local brands who have signed a partnership with Intel to introduce cost effective tablets based on Intel Atom processors for around $164 US. The Gright based tablet comes at a price of $159 US in the market and features the Z2520 processor which is based on Intel's Clover Trail series design featuring two cores and a multi-threaded x86 Saltwell architecture. The chip features a clock speed of 1.2 GHz clock speed and we will see if the performance is enough inside the tablet to handle bulk of new applications and tasks. There's much more to talk about regarding the specifications of this tablet but we will cover those details later on in this article.

The 7 Inch tablet sports a IPS-HD display panel which boasts a resolution of 1200x1920 enabled with 5 point multi-touch capability. The 7 inch panel is good enough for multi-tasking since it provides enough room for easy and accessible maneuverability across the screen. Before we go into the details, we need to detail the specifications of the tablet and a small note to everyone looking forward to buy this tablet, don't fall for the specifications listed online by retailers. They are misleading and advertising that the HD7I features a Z2580 processor along with a 1200x800 IPS display where as that isn't the case at all. You can find the actual specs listed below. 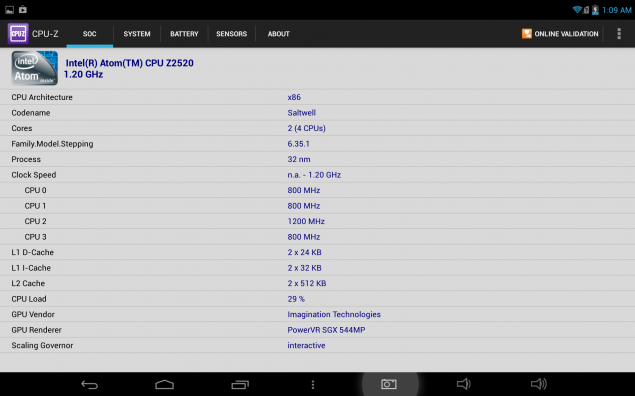 The packaging of the tablet is quite simple, its shipped in a box package with pictures and logos of Gright and Intel Inside brands. The front also focuses on features such as 3G, a full HD 7-Inch display, 3G call functionality, 1 GB LPDDR2 memory, 8 GB storage space along with SD card support, Ultra Slim aluminum design, 2M + 5M dual camera and Android 4.2.2 OS. The back of the box is nothing special since it once again lists all the feature that we detailed above.

Accessories include the tablet itself, a Micro USB cable. a Mini-USB to USB adapter, white colored headphones and a wall socket charger. There are a couple of documents such as warranty and setup guide included in the box just for the sake of including them.

The GRight HD7I has one thing that I think is the best thing about it and that is the design. The GRight HD7I weighs in at under 200 grams and has dimensions of 193.2 X 106 X 8.25 mm. The body is made out of a slim aluminum based design. The tablet is colored white and the display is surrounded by slightly thick bezels.

On the top, we can note that there's a speaker position along with two sensors and the front 2 Mega Pixel camera. The bottom has a large bezel which doesn't include any buttons since all of that is handled on the display. There's a metallic silver frame around the sides of the tablet which runs around the entire tablet. 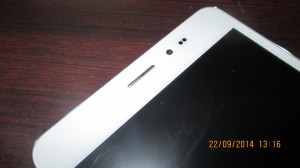 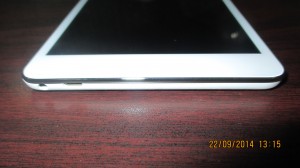 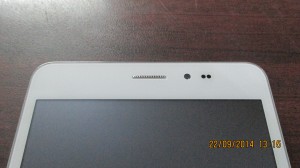 The rest of the input and output ports such as Micro HDMI, Micro-USB, Audio Jack have been placed on the top and are easily accessible. The Micro-SD card slot has been placed on the opposite side of the volume control and On/Off switches which can be accessed from there easily.

On the bottom, there are two speakers which, rather facing towards you, direct the sound towards the bottom side so it can vibrate easily. The back also sports a rear 5MP camera and like many tablets on the market, this variant also does not include flash. The front camera is rather good with 8-MegaPixel quality capture and up to 720P  Video recording.

The 7 Inch Gright HD7I tablet sports a IPS-HD display panel which boasts a resolution of 1200x1920 enabled with 5 point multi-touch capability. The 7 inch panel is the standard size for tablets offering more than enough room for easy and accessible maneuverability across the screen. Coupled with a higher resolution, the display is the only good thing I can find in this tablet offering decent viewing angles and a hassle free touch environment in several conditions. The 189ppi display isn't the best you get for the money but the quality isn't the worst either and is pretty usable for reading documents and browsing web pages.

Size wise, this is a 7 inch widescreen LCD with a resolution of 1200x1920 pixels and 720P video playback. The viewing angles are great and even if compared to the better resolution boasting Nexus 7, the tablet does a good job keeping up with it due to the IPS panel keeping the brightness just accurate and colors aren't bloated with a high contrast ratio when compared to some of the cheaper tablets. Application wise, the resolution will be good for browsing but could pose a serious draw back during gaming since the native resolution of the tablet will hinder gaming performance in some of the new titles available on android so its better to stick with temple run and angry birds rather than playing Real Racing 3 on this tablet.

The Atom Saltwell based Z2520 Dual Core processor featured inside the GRight HD7I is part of Intel's Clover Trail line of atom process. The chip runs at a base clock of 1.20 GHz and idles at 800 MHz when under no load. The chip is based off an outdated Intel architecture which has been replaced by Clover Trail and Bay trail series of Atom processors and Intel possibly has sub 5W Core M chips in their hands now which are being fused in several entry level notebooks and premium tablet designs. Regardless of that, these old processors based devices do come at a low price so that's one advantage of them being still around if not anything else.

The chips features support for LPDDR2 memory (2x32-bit) rated at 1066 MHz. The tablet in specific has just 1 GB of memory which should be enough for most applications while video codecs include MPEG-4, H.264, DivX, VC-1, WMV-9 and VP6 for video. Audio codecs include AMR-NB, AMR-WB AAC, MP3 MiDi and WMA. The chip is fully compliant with 1920x1200 resolution (WUXGA) and comes with the XMM 6360 modem for wireless and on the go 3G connectivity.

The android market has flooded with several benchmarking applications since uses want to compare their devices against a vast array of high-performance and budget friendly devices available across the globe. We ran a few benchmarks to evaluate the performance of the Gright HD7I tablet. The scores include 4670 Marks in 3D Mark Ice Storm, 4395 Marks in 3DMark Ice Storm Unlimited, 328 Single Core / 790 Multi-Core Points in GeekBench 3, 15618 Points in Antutu v5.1 Benchmark and 4374 Points in Quadrant benchmark. The results can be found in the gallery below:

The GRight HD7I itself comes stock with 8 GB storage (4.62 GB usable) which is a decent amount of space but may become an issues if you are a heavy application user or gamer. It does have a Micro SD slot which allows for higher storage capacities but the applications are installed in the main storage as standard so a 16 GB size would have been better. Even the HD8I model comes with the same storage capacities which make it a down side of the GRight based Intel tablets.

Besides that, the GRight HD7I has a 3.5 mm jack, WiFi, Bluetooth, a micro USB jack for data transfers or hooking up an OTG cable and a Sim card slots for regular phone plus 3G connectivity since this is a Phablet by specs and core design. 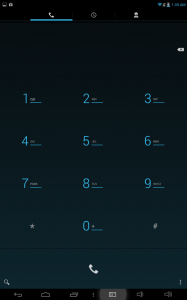 The software side on the GRight HD7I isn't the strongest thing either. Boasting an Android 4.2.2 OS, we can come to the conclusion that Jelly bean is neither the latest nor the best version of the Jelly Bean OS which has seen the 4.3 revision. Android has been updated to 4.4 KitKat since some time now and I was really expecting a better OS variant and to make it worse, there won't be any updates delivered by GRight for the tablet which means the software support in this tablet is virtually non-existent. Users may be able to flash unofficial firm wares but that voids the warranty so there's that. 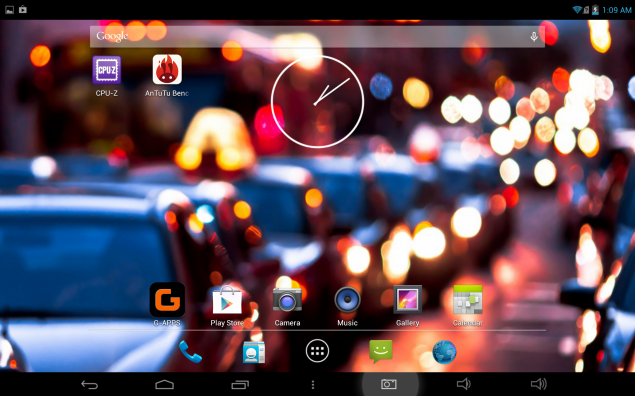 Aside from that, the 4.2 Jelly Bean also means that some applications will not be supported once Android moves to newer updates in the future and will depend on the developer whether they wish to release an update for older android versions or not. The layout and theme design is pretty standard Jelly Bean look with all the native applications along with a few bloatware apps installed out-of-box by GRight which really don't make sense. A stock version would have been much better and we had to remove half of the applications which were no use to all and run benchmarks in a pure lag free condition. 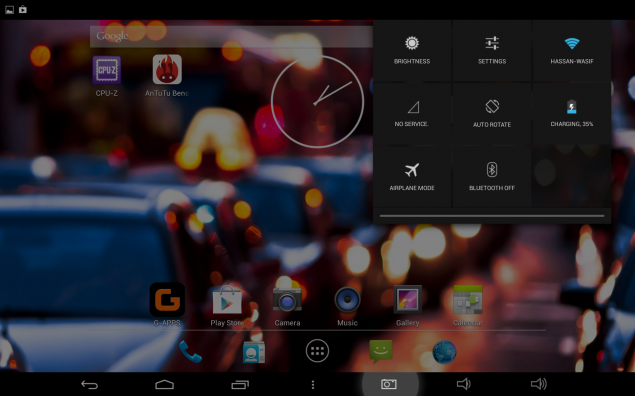 Including both front and back camera is a good addition to the tablet from GRight. The main camera is rated at 5-MegaPixel with 720P Video recording support while the front camera is rated a 2-MegaPixels and is an ideal choice for video chatting applications. 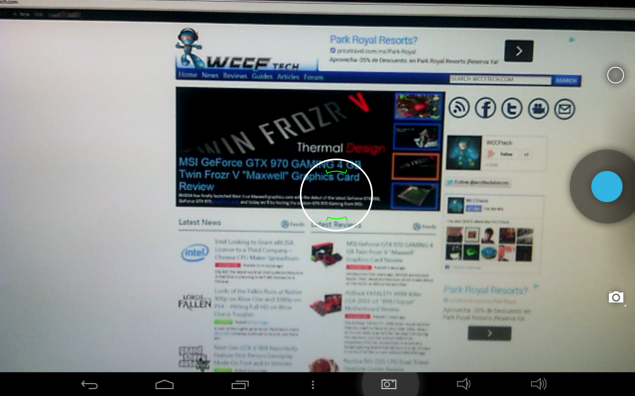 Video recording is at 720P while video playback is featured at 1080P. The video recording is great from the main camera but the front camera is ok when using skype and other video chat services. The camera quality isn't best for both sides but its a do able experience for a cheap and low cost tablet that GRight offers.

The Li-Ion 2900mAh battery to be exact runs for a 24 hour duration in mixed usage conditions by reference which may include browsing, gaming, multi-tasking, etc. The battery did last a good amount of time before being run out of juice. We can put the numbers to around 4 hours in intensive gaming, 14 hours in browsing and more than a day worth of time while regular usage which include call, 3G usage and standard application use.

Ending this review, I would say that GRight entered the market with the wrong product at the wrong time. There are several reasons, neither is GRight's solution the most fastest in the market nor does it have any features that make it stand out of the thousands or more tablets which are available in the market at the moment. You can find tablet solutions from APAC markets that cost less and perform better. Like I stated, the hardware in the GRight isn't the best and there's a reason for that, they want to keep the prices as low as possible however that isn't being showcased right with the HD7I tablet.

To sum this up, I would just say that GRight's HD7I is neither the best or the worst tablet in the market. Its a regular Phablet that comes in a price which is hard to absorb given the variety of competing solutions available in the mobile and tablet industry.