Govee Glow Smart Lamp Review – A Light for All Nights

If you're anything like me, you tend to find yourself awake during the dark hours. It's not that I'm a vampire; it's just that the daylight isn't my time. Naturally, this takes its toll on my eyes if I'm straining in the dark, or it means I've got a sometimes garishly bright light shining throughout some of the dark times, acting as a beacon to seemingly every single Moth in Britain. No longer. The Govee Glow Smart Lamp has solved this problem with a surprisingly stylish little product, and one that is easy on the eyes in more ways than one. 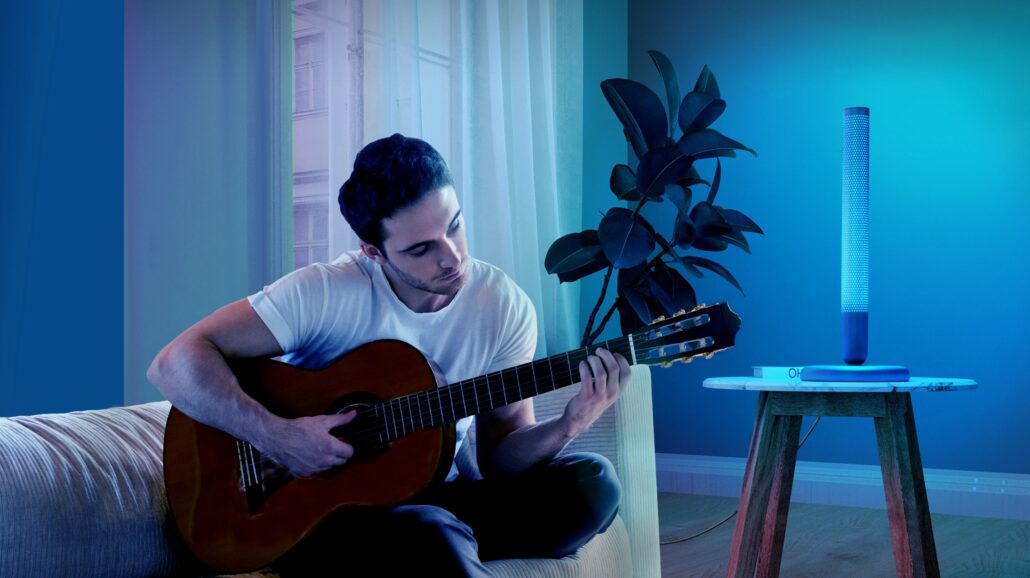 Basically speaking, the Govee Glow Smart Lamp is an LED light surrounded by a metal tube with holes drilled into it. Yes, that's a simplistic description, but fitting. The thing is, this simplistic design is excellent in its own right. It doesn't stand out unnecessarily; it fits in with any decor, and thanks to its size and shape, it fits on your desk with no issues at all. It genuinely looks good.

Height wise, the lamp comes in at just short of 40cm, with a base of a little over 15cm. The base is quite short, meaning the lamp can very easily stand at the side of a monitor, the base fitting beneath most gaps. The width of the cylinder surrounding the LED comes in at a little under 4cm. Simply put, the actual size of the lamp is as small as you could hope for in a desk lamp, but the small size doesn't act as a limiting factor depending on what you want from the lamp.

Before I talk about the output of the lamp, which is arguably the most important thing, let's talk more about the build and supporting aspects. The Govee Glow Smart Lamp is very light, but it doesn't feel like it will break even with this. Hell, I've given it quite the squeeze, and I've attempted to bend it to no avail. It would take a decent amount of force to put a dent in the lamp, the metal frame doing its job well.

If there's an issue with the design and build of the lamp, there's only one LED, which is at the lamp's base. I'll talk more about the light output later, which is an issue, but the other issue with only the one LED at the base is that - unlike other govee products and some other LED lights - this can only output one colour.

The base itself is made out of plastic, which isn't quite as durable, but less likely to get knocked about. This base also features four touch-sensitive areas on an LED strip that allow you to control the lamp, though this control is more awkward and limited than the true method of controlling the Govee Glow Smart Lamp, that being the Govee App. I'm so used to companion apps for games and products being generally lacklustre that this being genuinely good is almost too much of a surprise.

The colour range is as expected, letting you choose any of the 16 million colours at any given time using the app. Personally, though, rather than using the option that allows you to create your own functions, I've gone with the pre-set options on offer in the app. The night light option is top-notch, offering a lovely relaxing glow (thus the name). Others all have much to offer,  pre-designed by Govee to give you the feel you want.

That's where the Govee Glow Smart Lamp sets itself apart; it offers atmosphere and a general look that isn't hard on the eyes or the head. Now we get to the issues with the singular LED at the base of the lamp. Combined with the perforated and elongated design of the tube, you'll find an uneven light from the lamp. The other issue is that the design breaks up the light, which creates the glow effect that I like, but it breaks it up enough that this doesn't have the ability to light up a room.

Functionally, the best you could honestly hope from this is a soft reading lamp, and that's only when it's very close to where you're reading the book. The lamp needs to be within half a metre, further away from that, and there is no functionality beyond looking good. Again, this is both a selling point and a detractor; it all depends on what you want from the lamp.

Coming in at £69.99 in the UK (though currently on sale on the Govee website) and $69.99 in the US, the Govee Glow Smart Lamp isn't exactly cheap, but nor is it too expensive when looking at the options available and the general build quality of the lamp. While there are certainly some limitations, such as its inability to light up a room and the limited functionality for even basic aspects, such as reading, there's something inherently nice about the lamp. It gives atmosphere, and it's easy on the eyes in every single way.

Would I recommend it? Yes, I would. Enough so that I plan on using it until it drops.

The Govee Glow Smart Lamp is a well built and well-designed lamp, with excellent support through the Govee app, giving you a host of options in how you want the lamp to look. The lamp is all about atmosphere, the design creating the "glow" effect, befitting the lamp's name. This isn't to say there are no issues, with the lamp not really being bright enough to light a room and being very limited on allowing you to do something as simple as reading. Still, it's hard not to recommend it simply because it is more of a mood and atmosphere item, than a functional one.