God’s Trigger under sell’s itself from the very the beginning. The tutorial level that introduces the characters, Harry the Angel and Judy the Demon showcases some of the worst parts of the game. The level doesn’t have much charm with uninspired lasers acting as the only obstacle, enemies that allow you to test your reflexes and dialogue that feels almost comically bad. Luckily, nearly all of these are almost immediately improved upon when the game starts in earnest a few moments later.

God’s Trigger is an isometric top-down hack and slash game that has players fight their way through film sets, desecrated churches, factories and the heavenly planes as well. Players will die from one hit, as well most enemies, so reflexes and adaptability are what you need to survive the hellish world. You could make a comparison to Hotline Miami in the way the game moves, but it feels a little different. Enemies aren’t quite as well defined in God’s Trigger, so players can’t always rely on trial and error. On top of that, weapons take much more of a backseat in God’s Trigger, with players normally fine with using their basic attacks to cleanse most levels. Notably, the neon-soaked style of Hotline Miami was much more interesting than the rather drape art style of God’s Trigger.

There are a few additions to the formula as well that Hotline Miami doesn’t have. While wearing different masks would change some passive abilities, God’s Trigger has abilities that can be activated to take advantage of a situation. These can be anything from possessing an enemy to freezing time or turning invisible. It's a nice idea but to be honest I kept forgetting they were an option as I played through each level. Even in moments where I struggled I wouldn’t remember to use any of the abilities I had at my disposal.

But the game didn’t really suffer for it. In my first session with the game, I thought I’d just get a handle of the gameplay and themes, before digging into an extended trial later. But as I murdered my third horseman, I realised that I had been playing for several hours already. There is something delightfully moreish about God’s Trigger, even when you feel completely stuck. Every death is a lesson in God’s Trigger, and you know that if you can move a little faster, or kill the enemies in a different order you’ll have a shot at getting past. The game might have forgettable abilities, but its open maps make sure to give you alternate routes and strategies every time you’re stuck so no encounter, however repeated, feels the same.

This game is not quite heaven sent, though, and a few issues continue to plague the player each step of the way. God’s Trigger has a fairly rudimentary stealth system. Enemies can be stealth killed, which silently removes their body and allows for players to thin their numbers a bit before a big encounter. Unfortunately, the game can feel like the input is delayed, and stealth kills can go unrecognized as you race past enemies. This can turn a perfect run into a sudden failure and feels frustrating as the game wants you to move fast but seemingly punishes you for it. This can also be true of changing character as well. In the single player mode, you take the role of both Harry and Judy, swapping between them whenever you like. Each has their own ability and basic attack which makes them preferable for different situations. But swapping often means arguing with the game for a moment as it never seems to understand the button prompt the first time around. I found it almost impossible to change character in a fight, and would instead do it between skirmishes, stalling the momentum I had gathered.

But in local multiplayer, this isn’t an option. The on-screen chaos that is caused by two players blazing a bloody trail through each level is delightful, and even at the most intense moments, you never feel like you don’t understand what is going on. I suppose that this is a benefit to the art style I dismissed earlier, which does use a lot of clear lines and colour coding to make sure you always know where you are and what is happening. This is definitely a game best enjoyed with a friend over a long afternoon on the sofa. Even the abysmally 90s softcore collectibles hidden in most levels are almost amusing in a deeply cringey way with a friend.

The story and characters might be called B-movie comedy, but they are so underdeveloped I don’t think they even qualify for that. Harry has fallen to Earth and immediately sets about killing the four horse of the apocalypse. Judy the Demon sees Harry fall and joins his struggle for reasons. Their dialogue during the massacres is stilted, uninteresting, and delivered in such a drape tone it's hard to catch them over the action. But this isn’t a game about the story. The vaguely religious overtones are just an excuse to introduce demons, angels and more gore as the levels progress.

When you’re knee deep in the blood of enthralled cultists and soldiers, zipping across rooms to dispatch another wave of enemies, you don’t really care about the reasons, you just want to find your next victim.

Reviewed on PlayStation 4 (code provided by the publisher). You can purchase the game for Xbox One via Microsoft Store or for PC via Green Man Gaming. 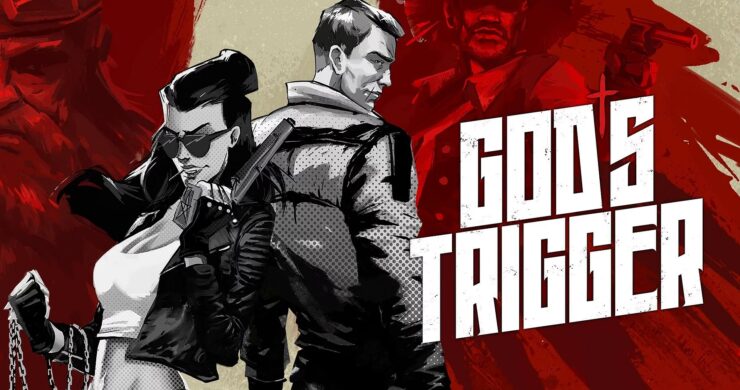 God's Trigger might feel underwhelming at the start, but its mediocre tutorial hides a fast, frantic and fun hack 'n' slash that is perfect to play with a friend.