God Wars: Future Past Review – A Relic of the Past

Strategy JRPG’s have been a bit of a dying breed in recent years. NIS America has had the market cornered with over-the-top stylized titles such as Disgaea for years, but what about the more grounded titles? Once a mainstay of the early days of the first two PlayStation consoles, this offshoot of the Japanese RPG genre has become a relic of the past. Developer Kadokawa Games, in their first RPG since Natural Doctrine, has tried to resurrect that lost genre with the recently released God Wars: Future Past.

If you’ve had an introductory course on Japanese mythology, you might already have a nice grasp on what God Wars: Future Past is about. As the rustic Kintaro and his animal pal Kuma, the player’s goal is to protect the Princess Kaguya as she journeys across medieval Japan in hopes of reconnecting with her long lost mother. Along the way, both gods and mortals alike journey to the west to keep the princess safe from harm, whether from Japanese oni, pirates, or other mythical beasts. 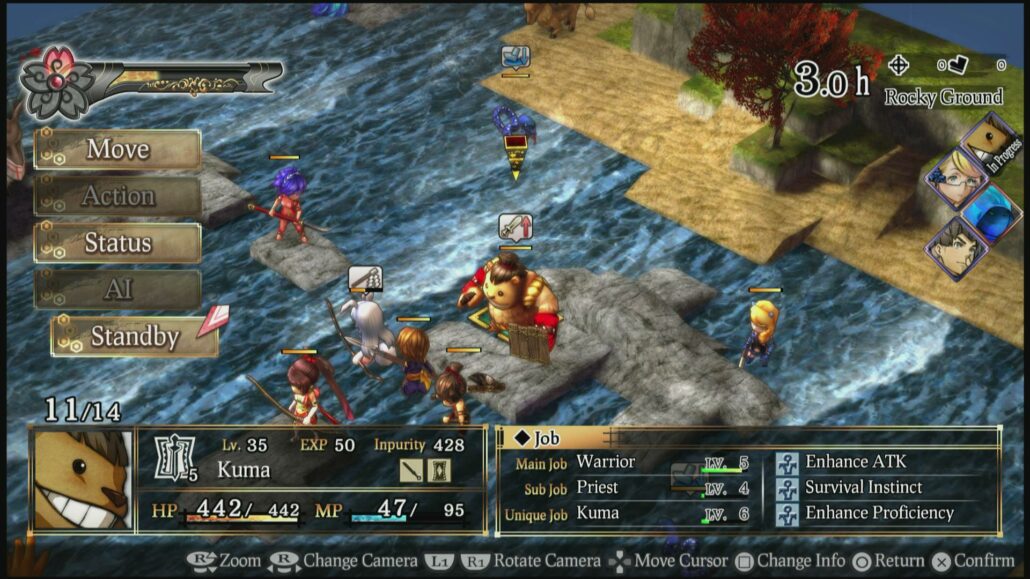 As the story is deeply rooted in Japanese lore, playing through God Wars: Future Past in Japanese is the purest experience. However, it’s worth noting that the very first cutscene (and a few select others throughout the story) doesn’t feature subtitles as of writing this review. A separate English dub is available for players to enjoy, and thankfully the issues that were reported between early adopters in regards to poor audio mixing have been fixed with the minor (80MB) day one patch on PS4 (versus the much more substantial patch for Vita owners).

When it comes down to expanding the tactical JRPG genre, God Wars plays it safer than most. In terms of both presentation and mechanics, this Kadokawa-developed JRPG feels taken straight out of the PS2 era. The graphics of environments and even the characters themselves take little creative liberties in any particular art style. What players can expect are some completely average designs that do little to shine in comparison to the colorful character portraits. Any of the environments where players will do battle feel devoid of individuality save for some of the set pieces. One battleground might have a cluster of windmills, another might be on a boat. Beyond that, there’s little diversity between the urban and rural levels, with even the environmental bonuses providing minimal benefit compared to the party’s stats.

Despite playing like a simple grid-based strategy JRPG, it’s easy to see that Kadokawa has taken notes of what people have enjoyed in recent years with the genre and implemented those lessons in God Wars. Team members can move and perform actions in whichever order they choose. Spells fire off instantly rather than charging across multiple turns, where enemies might simply walk out of the way. A handy turn chart shows the order of upcoming actions. Teammates and VIP’s stick around the battlefield for a few turns after falling to give players the chance to revive them (something the enemy team can’t take advantage of). 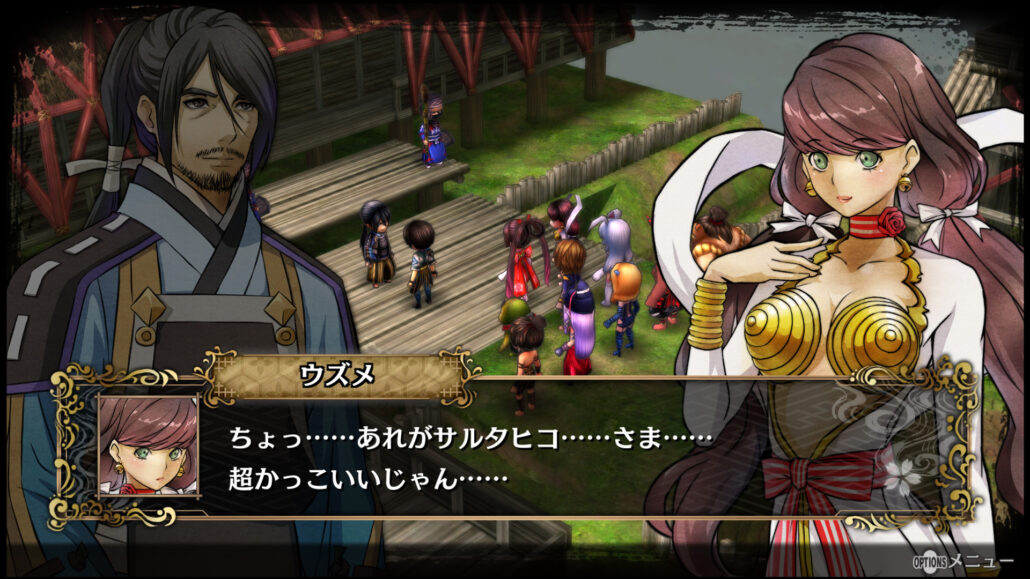 God Wars: Future Past may have little to do with the team that developed Disgaea, but that doesn’t mean this is an SRPG that can’t take advantage of some efficient min/maxing of characters. Every character has access to three classes (main, sub, and a character specific class that can’t be changed) that can provide some degree of flexibility in customization. Not every character can access every one of the thirty classes, with only a very minor amount of classes being gender specific. There’s a fairly straightforward unlocking system that should feel familiar to fans of Final Fantasy Tactics. Investing enough time and skill points in specific classes will unlock another and the process will continue through most of God Wars.

For the most part, what you unlock in a particular class will only be useful while you’re actively a member of that class. Because of this, multiple classes will have similar abilities that have varying degrees of effectiveness. The exception to this rule is through unlockable (and upgradable) passive abilities, of which each character can carry three into battle at a given time. By continually swapping classes and working your way into the more advanced tiers, the player’s effectiveness in battle will also exponentially increase. While a beginning Magician might only have access to single-target elemental spells, a higher level Celestial would have similar spells that can target an expansive area on the field and increased damage, albeit at a much higher MP cost.

Early on, I made an effort to give every character a few levels of Priest to unlock a passive ability called Proficiency+ that gave a 50% increase to the skill points earned, making leveling new classes progress much smoother. From there, I’d usually branch into some sort of skill that would increase either a specific weapon type’s effectiveness or a straight ATK/M. ATK boost. Given how many classes there are, players will constantly be upgrading into newer and more effective classes throughout the story. Unless you’re wanting to take advantage of Kaguya’s special ability to gain an increase in stats depending on how many job classes she’s mastered, or a trophy hunter, I wouldn’t advocate sticking with a less effective class when there are many others to put to good use. 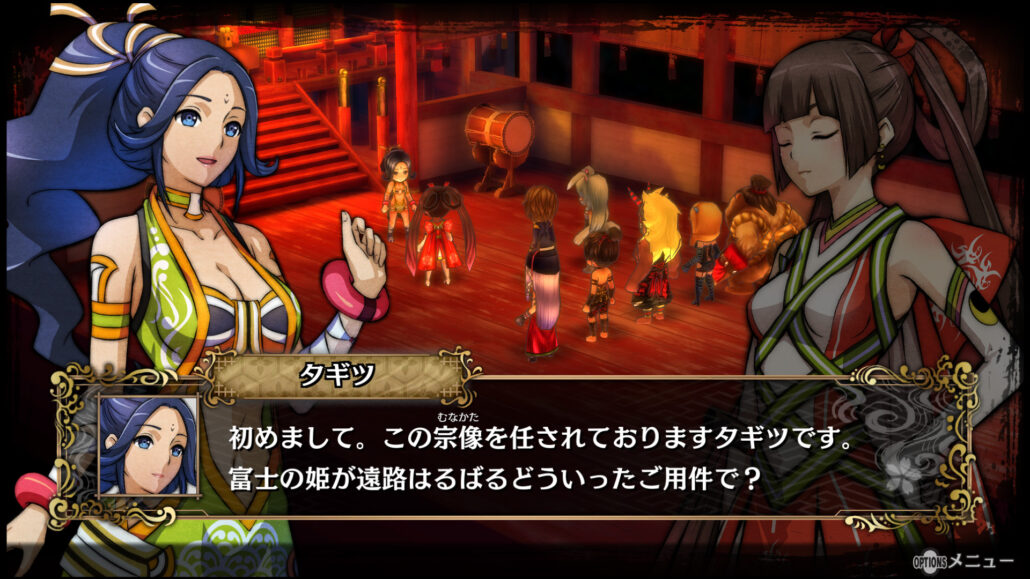 As players progress through the story, access to new Secret and God skills give the party some much needed flexibility with ultimate attacks. By filling up a special five-segment gauge, Kintaro and team have access to unique God skills that vary from supreme buffs to some of the highest damaging attacks in the game. A personal favorite to use was one that consumed all five pips in order to launch a map-wide fire attack that targetted every enemy on screen.

As a tactical JRPG that doesn’t take many risks, God Wars: Future Past doesn’t particularly stand out as a must-play title on Playstation. There’s nothing negative I can truly say about the project, nor is there anything that makes it a forty-hour reason to jump into the strategy JRPG genre for the first time. Fans that already enjoy the genre can appreciate seeing another well-crafted experience, whether they enjoy it on their television or on the portable screen of the Vita.

God Wars: Future Past is certainly a JRPG from another time, when the tactical genre was a mainstay on the Playstation 2 (and even has the aesthetics to match). If you've been craving another tactical title in your life, God Wars is a pretty safe choice.