This Review is Not Spoiler Free. 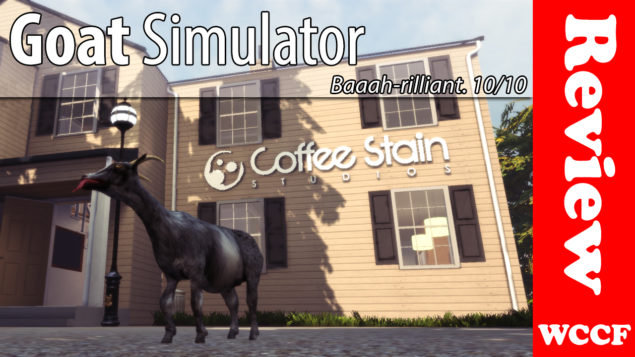 First of all, a big thanks to Anton Westbergh (@AntonWestbergh) for handing us the Review Copy of Goat Simulator. Goat Simulator is an Indie game developed by Coffee Stain Studios to instant, critical acclaim. The game's humble origins were from a Game Jam and it was only after the Internet's enthusiastic demand that it turned into an IP. When we heard of this game, a few weeks back, we knew we had to get our hands on it.

The Goat Simulator Review: You won't believe the stuff you can do in this Baaah-rilliant Indie Master Piece

Normally, what happens in the case of a super-hyped game, is that the Gaming Studio shamelessly paints it as the Next Big Thing and the critics shoot it down (mostly). However just as everything about Goat Simulator is one-of-a-kind, it has the exact opposite approach, because the Dev's don't take it seriously but we think it's nothing short of epic. Cofee Stain Studios, posts a witty comment on the official description:

"Goat Simulator is a small, broken and stupid game. I t was made in a couple of weeks so don’t expect a game in the size and scope of GTA with goats. In fact, you’re better off not expecting anything at all actually. To be completely honest, it would be best if you’d spend your $10 on a hula hoop, a pile of bricks, or maybe a real-life goat."

Let me tell you right now, don't listen to them. This game is an absolute gem. Tell me something, how often are you going to play a game in which you can get a demented goat that sacrifices humans and then goes off to space? That's right, absolutely none. If the Pre-Order price tag of $10 is too much for you, wait a bit and I am sure this will eventually come in very cheap bundles. But regardless of when you get it, this game is an absolute must-have for any respectable PC Gamer. 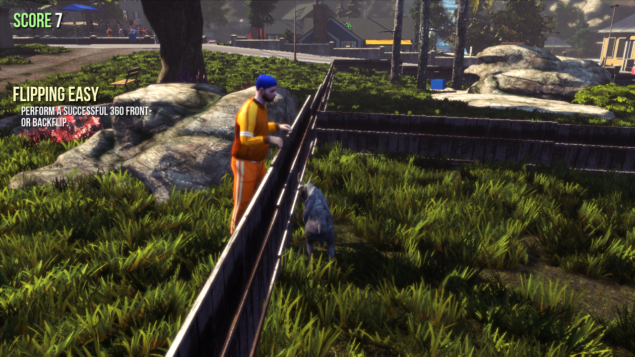 I will try to cover everything that can be done in this game. I spent the better part of an entire day hunting down easter eggs and cool stuff to do and I am still pretty sure I missed out alot. You start in an enclosed area with a completely unsuspecting looking human watching. The most critical element of this game is the tongue of the goat. It's a super-strong, super-stretchy and super-sticky piece of goat-technology that is able to lift, throw and above all lick everything known to goat kind. The headbutt of the goat is weapon of mass destruction and will lay waste to just about anything it touches. Finally, this goat is damn near un-killable.

The gameplay is more or less arcade. Remember those skate boarding games of old? Well this is like that, only much more fun. The game is painfully simple though unbelievably fun to play. You roam around the somewhat limited game-world looking for trouble, and scaring the crap out of humans. The aim of the game is to get as many points as possible. The original map and gameplay won't change alot but because the "Workshop" feature is present, more levels and user generated content is expected. The gameplay is dynamic, Phys-X ridden, and sometimes buggy but never boring. And now the best part of this particular review, the stuff you can do in Goat Simulator.

Play Nyan-Flappy Goat: If you think Flappy Bird is hard, you clearly haven't played Nyan-Flappy Goat. I played the Goat Simulator for 8 Hours straight and my score is still, you guessed it, 0.

Become the king of all goats: I found this around the 5 hour mark of the game and when I did, I face-palmed. This is probably one of the coolest parts of the game and lets just say that it is staring you in the face (I am not going to tell you how to get in, that will just ruin the fun!) We basically enter a secret location and proclaim ourselves as the rightful demonic king of all goats. We even get a skull crown to show for it.

Visit the StoneHenge, and Trash it: Visit the location that has enraptured humans, no, goats for Millennia and offer your services as resident cleaner. Trashing a national landmark was never so much fun. To be honest, when visiting the goathenge it is neigh impossible, not to trash it; your horns being the superpowered, chaos machines that they are.

Goat Encounter of the First Kind - Get Abducted by Aliens: When I found the beacon I immediately knew what I had to do. I had noticed the crop circles before and remembered that one of the beacons was missing. So I licked the beacon took it to the crop circle and placed it in the marker. Lo and behold, the UFO appeared, and took me to space. Interestingly 'space' consisted of lots of stars, Earth and a freaky astronaut orbiting us. Of course a demonic goat does not require puny things such as an oxygen mask.

Attach yourself to fireworks and shoot of into the sky: Why? Because we are a goat, thats why.

Get a Power Pitcher and shoot humans: The Power Pitcher is available inside a cage near the point we spawn. Just go to it and the goat will wear the pitcher. From then on, Press R to shoot the tennis balls at unsuspecting homo sapiens.

Zero G, Water Slides, Skating, Satanic Rituals and More: From Zero G fun to Water Slides to sacrificial satanic rituals (trust me, you will want to find this one yourself), this game has everything. And this is just the vanilla map. When the user generated content starts coming, the epicness of third game will take a dive, inversely. 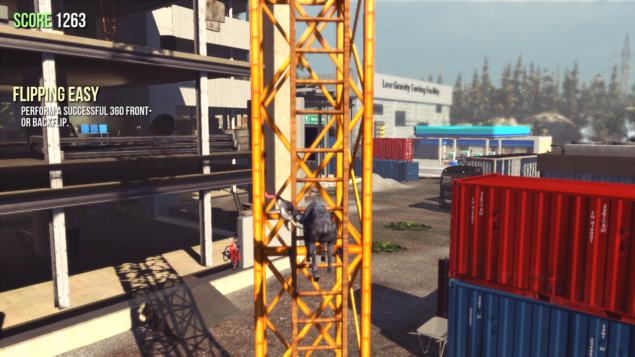 I am not going to go into detail regarding the graphics, polygon count, the visual acuity etc. etc. of the game. Goat Sim. is one hundred percent game play centric, so much so, that it gets a free pass from any glitches that might be present. However, it really doesn't need the free pass. The graphics are the standard from Unreal Engine 3 and are not half bad. Infact with the integration of PhysX the game play mechanics are downright decent. Some elements glitch, but deliberately so. For example, you should see what happens when the goat climbs the crane while carrying an object, interesting stuff.

I wasn't kidding when i said this game is a must-buy. It is. And like I already mentioned, if the pre-order price of $10 is too much for you, wait a few days for discount offers to appear and buy it. Once the user content comes out, this game will become an absolute gem. Not that it currently isn't because this is quite possibly one of the most fun games I have played.

Do you know what the problem with the current gaming industry is? Especially the AAA Titles? They have lost sight of what games were supposed to be like. I don't remember how many hours I put into Final Fantasy, Chrono Trigger and those SNES games. Games of old, were designed to be immerse but not through the use of gfx or gimmicks. They were immerse by design. And above all they did not take themselves seriously. It is these qualities, reminiscent of the retro-gaming era, that make the Goat Simulator such an insane hit. This game has singlehandedly won over even the most bigoted and cynical critics and the reason is simple: it is a silly game, which is probably 'unmarket-able' to big publishers and has absolutely no reason to exist. Yet, it does. And that makes all the difference. To buy this game visit either:

Infact this game is causing such a storm in the Gaming world that I wouldn't be surprised if it bags Goat of the year, ahem, Game of the Year Awards left and right. It has all the features to take the competition by surprise and leave them confounded. Oh, by the way, it wins WCCF's Editor's Choice Award.