Brave Sir Arthur's tale of love and loss is a timeless classic that ranks among the most iconic of Capcom storylines. Going from enjoying an afternoon picnic with Princess Prin Prin to having to rescue her from the clutches of some abducting demons is quite the turnabout, but our hero has managed to succeed time and time again. As the first Ghosts 'n Goblins game specifically designed for the Nintendo Switch (and the first new game since the PSP), Arthur has plenty of experience slipping into his strawberry boxers and rescuing the princess. In Ghosts 'n Goblins Resurrection, can Arthur do it again, or is he finally outliving his knight boots? 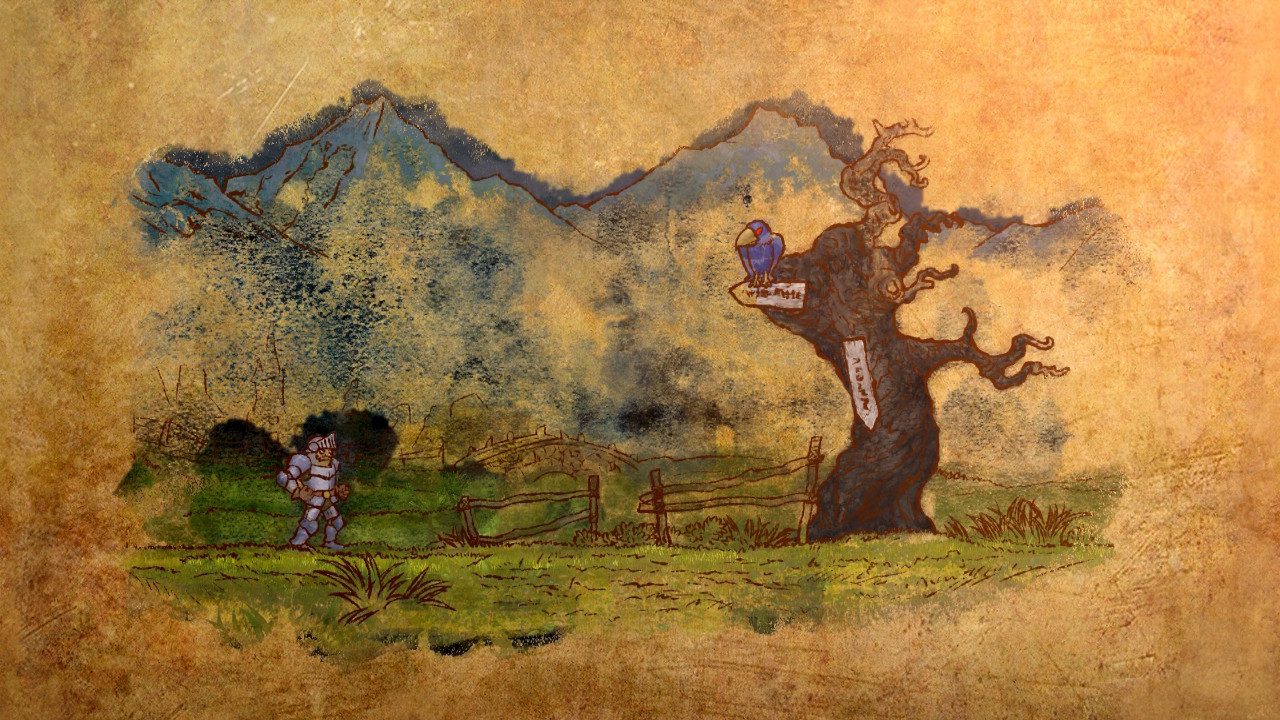 From the very first arcade/NES entry to today, Ghosts 'n Goblins has largely followed the same structure: fight through five devilishly difficult levels, beat some bosses, take on the big bad at the very end, and realize you forgot something critical (typically a bracelet left behind at the picnic) and do it all again, only at a harder difficulty. Ghosts 'n Goblins Resurrection fits that mold almost to a 'T' but with some notable exceptions. The first two levels offer a branching path but in all actuality, it's just a way to pump up the level count to seven rather than just five. These levels aren't brief, either. If you're dying half as often as I do, expect most levels to last at least thirty minutes to an hour as you engage in some light trial and error each time Arthur is turned into a sad pile of bones. On the third stage alone, I clocked in nearly ten minutes on the clock and eighty-eight deaths. That would be an impressive feat if I didn't spend nearly two and a half hours on those eighty-plus attempts, most of which spent dealing with a particularly obnoxious segment of riding atop a bone skeleton's back and jumping from platform to platform. 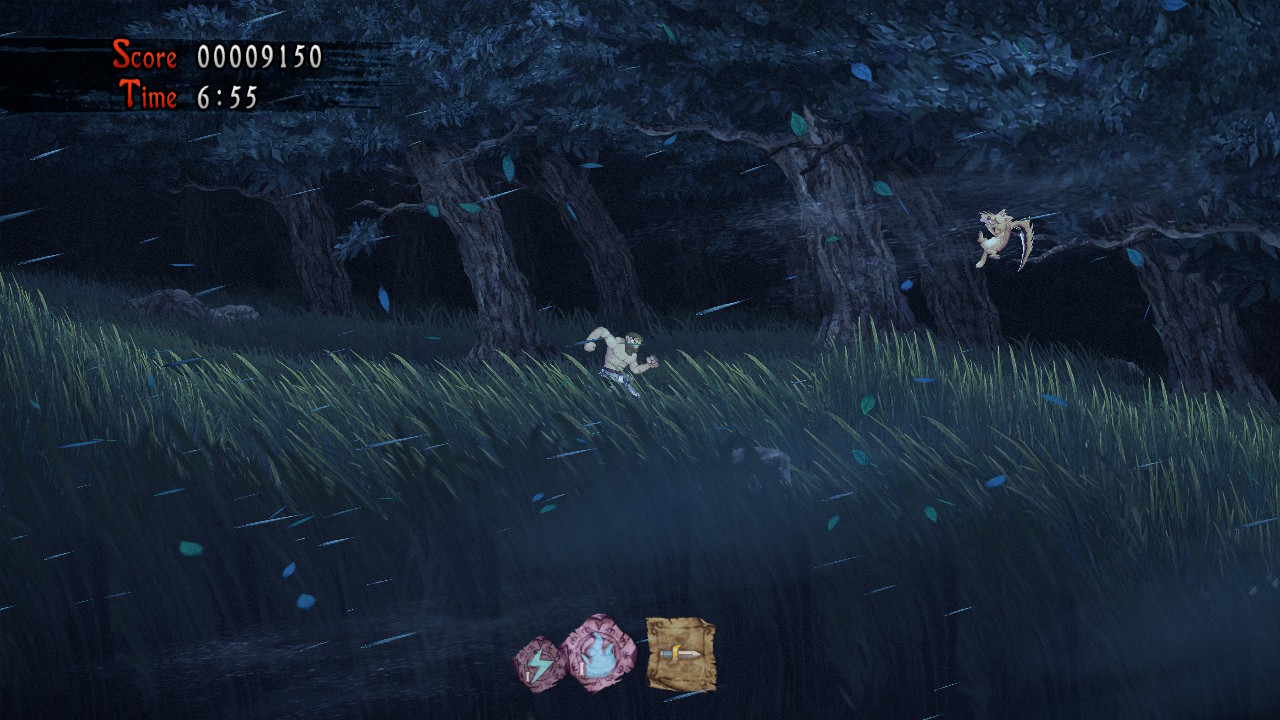 To offset the immensely hard difficulty that Ghosts 'n Goblins is known for, Resurrection adds in one of the most generous checkpoint systems that the series has ever seen. Not only does Arthur have a limitless supply of lives to venture forth with, but he can also raise many a flag in checkpoints throughout each stage. When you die, you're given the choice to restart the entire stage, go back to the start of the smaller area in each stage, or lastly the last pennant checkpoint that you passed. As a subtle taunt from the developers, the cursor hovers over the restart area option each time you die, making the player either mash their way to an earlier checkpoint if they're rushing through the menus or making them go up on option to retry from the last pennant.

While Arthur won't have to contend with a limited pool of lives to protect him on his journey to rescue Princess Prin Prin, don't assume that Ghosts 'n Goblins Resurrection is any easier than previous entries. On the middle two difficulties, Squire and Knight, the experience is largely similar. Arthur can take a couple of hits before he's knocked down to his strawberry boxers unlike Legend's single hit and the main difference is in the number of enemies that spawn in at once. 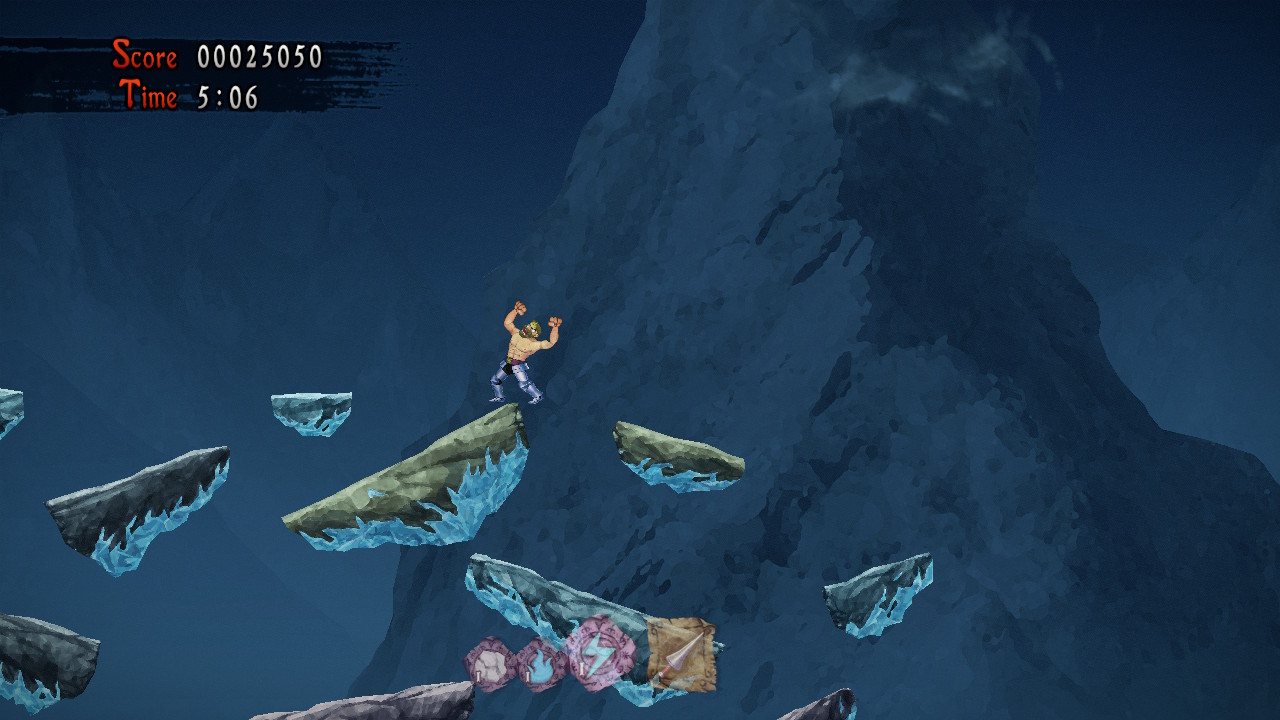 I'll gladly admit that I spent most of my review trying to finish the game on Knight mode and would have to knock it down to Squire from time to time just because of the sheer volume of enemies that would continuously spawn in at one time. If these enemies followed the same pattern, it wouldn't be so bad, but there are sections in each level where enemies will continue to stream in and do so off of a standard cycle. Regular enemies always drop in at regular cadence, making them easy to develop a pattern and navigate through. However, these moments of infinitely streaming enemies can ruin the attempts to navigate through constantly shifting platforms or a blusteringly frustrating level where the wind constantly pushes back any attempts by Arthur to advance forth. 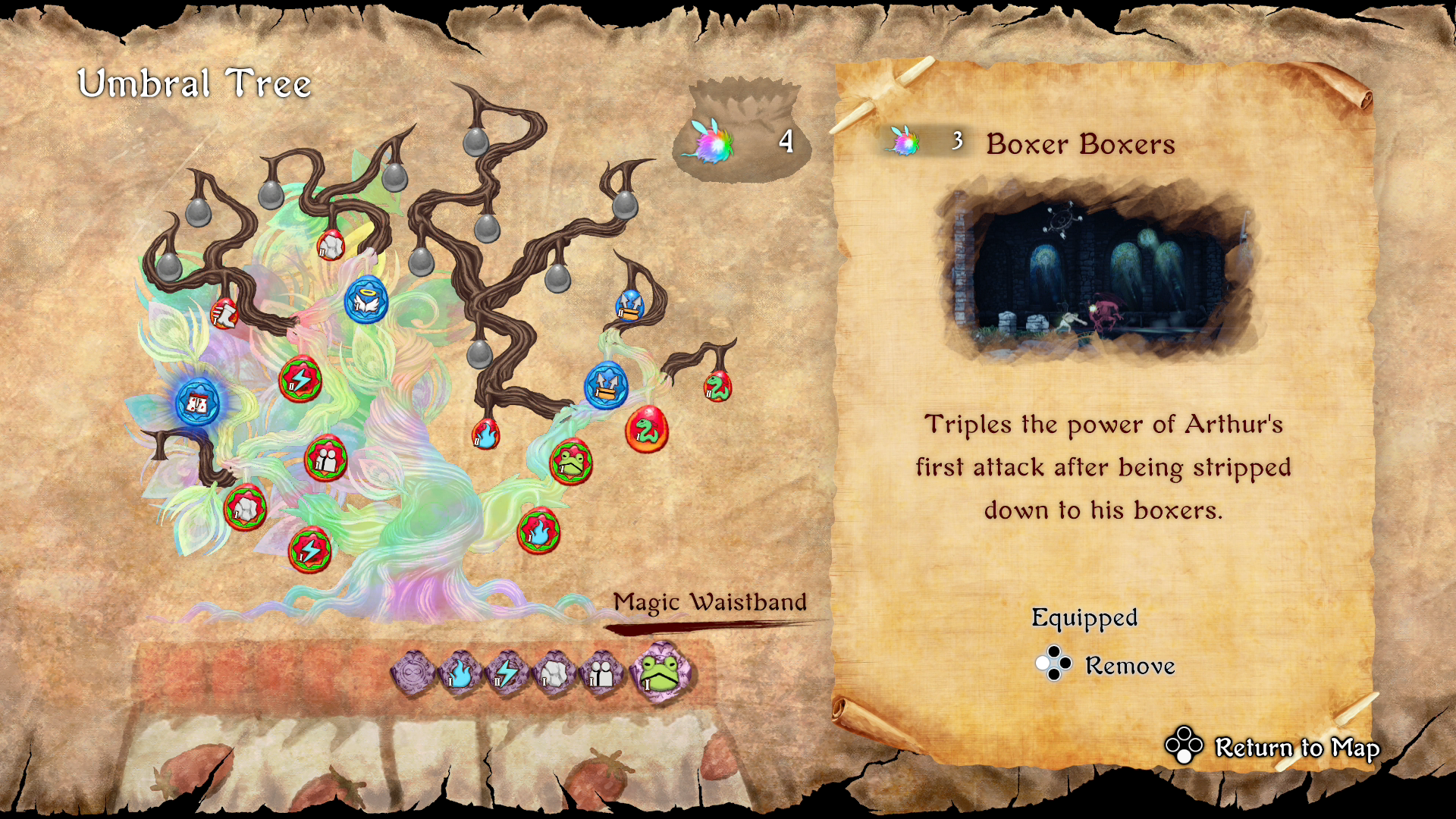 To give the player and Arthur a bit more of a fighting chance, Ghosts 'n Goblins Resurrection offers a few layers of persistent progression. For starters, whatever weapon Arthur is currently equipped with is never lost after death and is only gone when another weapon is picked up. Through the use of crafty upgrades, Arthur can expand his inventory to wield three weapons at a given time. These upgrades are earned by collecting Umbral Bees with a set number to discover in each level, frequently requiring the player to go out of their way to rush forth or take a side path to acquire. Umbral Bees can then be spent at the main map on a number of investments by way of passive boons or various magics that can be used merely by holding the attack button down for a few seconds (which might not seem like much but five seconds can feel like an eternity when you're unable to fight back). My tip is to invest in the right half of the tree just to the point where you can equip a second weapon and focus on the boons on the left half from then on.

The art style to Ghosts 'n Goblins Resurrection is one that's difficult to praise in just still images. In motion, the devils that aim to take Sir Arthur's head are rather colorful and easy to pick out amongst the darker and more drab environments. The world at large is like a printed canvas, rich with pencil sketches and oil paintings throughout. Arthur himself stands out as this weird caricature of a man, almost like a papercraft simile of himself that stiltedly runs and jumps throughout the world but without any real flow to his movement. This is especially noticeable in his jumping and running animations, where few frames of animation fill out his movement.

Resurrected for a new generation of gamers, the latest iteration of Makaimura is tough to recommend to players that might not know what they're getting themselves into. Ghosts 'n Goblins Resurrection is a hard-as-nails platformer when it hits the right flow, only to get distinctly more punishing and frustrating when infinite enemies and even the environment conspire to kill off the player. In keeping up with the tradition for the long-running franchise, Capcom has made no concessions to water down the experience for fans that want the challenge but we can all be thankful there's just a little bit more accessibility to Arthur's latest quest.

Ghosts 'n Goblins Resurrection plays it a bit too safe when it comes to being the first sequel in 15 years, instead opting for a polished up retelling of Arthur's quest to rescue his fair maiden from the clutches of evil demons not once but twice.