There were moments of quiet and contemplation in Gears 5 that made evaluate how very different this game is to what I expected. Peacefully driving a skiff along an icy plane, surrounded by mountains and glaciers, leaving a thick imprint in the snow behind me. Gears is no longer a hyper-masculine stereotype, rubbing up against hardened concrete and staring at a variety of grey and brown hues while characters scream about how much they love murdering aliens. More than ever before, you're asking questions about the world, your role in it, the COG, and what the correct path forward is. But you're unlikely to reach any real conclusions about any of them when the game ends rather unceremoniously.

Gears 5 is brighter and more vibrant than ever before, truly separating itself from the conventions of the series in a number of ways, and reinventing itself to secure the series' future. The primary cast from Gears of War 4 is here, but this time you'll be seeing more of Kait and the progression of her story arc, rather than Marcus' son, JD Fenix. With Kait as a protagonist, Gears 5 sheds the ties that held it to the old style and moves forward boldly in its own direction, and it's mostly excellent.

Of course, not everything has been thrown out. Gears 5 is still a cover-based shooter, one which will see your characters crouch-running, rolling, sliding, and snapping themselves against brick walls, all while pulling off perfect reloads and blasting the heads off of the latest alien threat, the Swarm. Gears 5 plays out in four acts, the first is essentially an introduction to the game, the second and third are far more open areas, with a variety of side missions that you can ride your skiff to at your leisure, and then the fourth act is a rushed finale.

In that second and third act, the game is in its prime. You'll be heading off to obscure locations on your map, harvesting components and upgrades for your new robotic drone buddy, and shooting down the alien menace, of course. The side missions are always short and offer decent rewards, so they're all worth visiting as you come across them, and I even found myself actively seeking out the optional content before moving on to any missions that might lock me out of the potential upgrades. 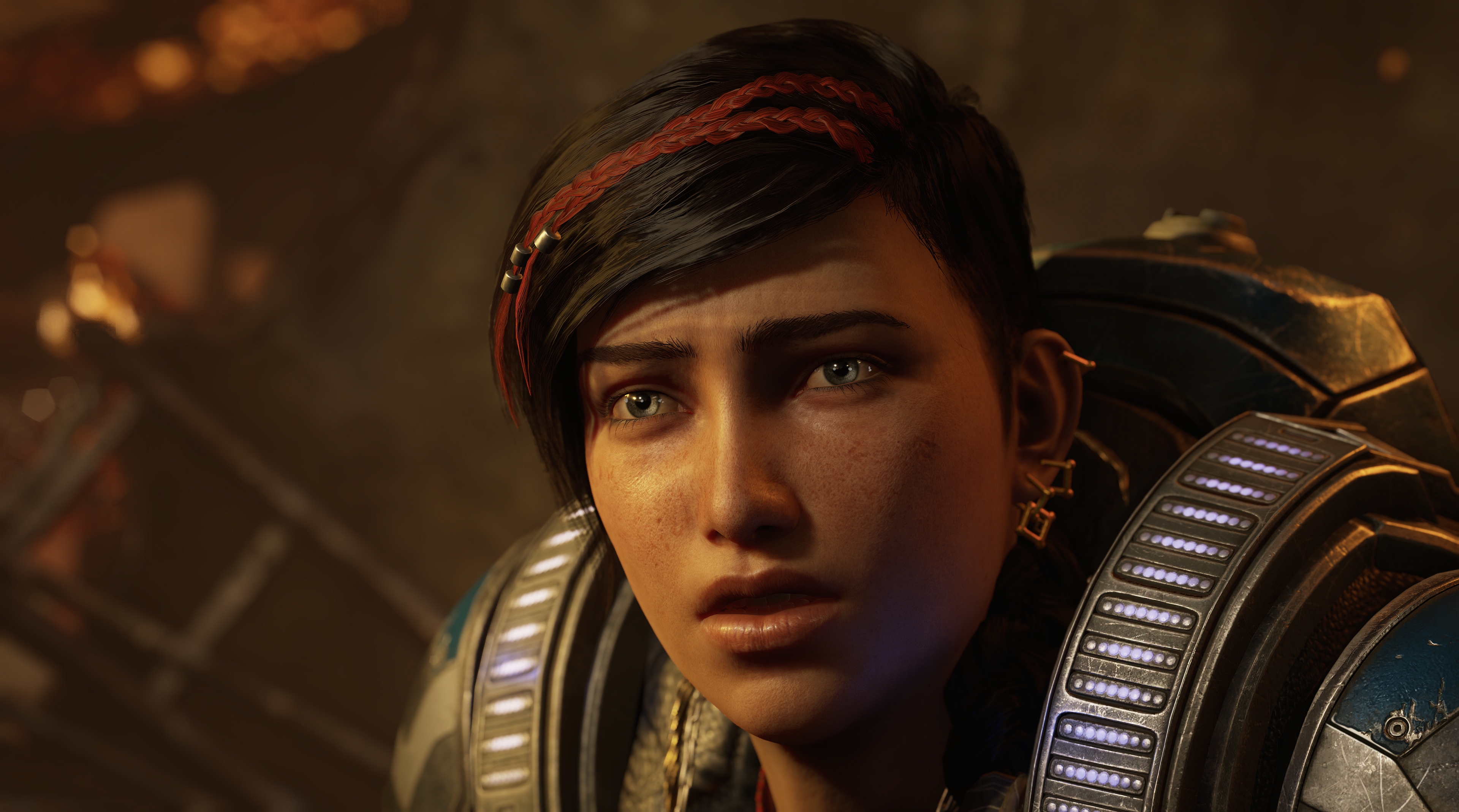 Jack is the new drone you'll be strapping upgrades in to, and Jack will be there to help you with anything you need. For example, picking up weapons and ammo in the field, offering you a health buff, reviving downed players, making you invisible for a stealth boost, and even hijacking enemy units and temporarily turning them on their allies. Jack basically takes the place of alternative abilities other cover shooters have, like Mass Effect's bionic abilities, and it's very welcome, especially when you're under fire and low on ammo.

Act two takes place in a wonderful snowy world tinted with a blue hue, while the third act is in a hostile Mars-like desert, complete with visually stunning storms and vivid red sands. The visuals in this game truly are excellent, especially on PC. When Gears 5 isn't having you explore open-world areas, you're in small corridors in labs and facilities, shooting down legions of enemies both insect-like and robotic, and when paired with Jack and a new stealth system, you'll have a variety of ways to approach each situation. Though honestly, you'll probably just end up shooting down the enemies anyway.

When it comes to technical execution, Gears 5 might be better than ever. Stunning graphics, a 60FPS target, excellent shooting, and impressive real-time cutscenes that you can actually unlock above 30FPS. But when it comes to the narrative, I have some issues.

We primarily follow Kait, who seems to be suffering following her mother's abduction in Gears 4, and in her off-the-record mission to find the truth, she discovers a few things and, as of the finale of the game, solves nothing. She finds out a lot about the Swarm, but nothing concludes. Nothing ends. This goes for side-plots too. A close friend is discovered to have ordered shooting on civilian protestors, which colors your view of them, and in outlander villages, children and villagers shout at the COG for being fascists. But much like the main story, none of these are given their time to develop properly. Even an emotionally "poignant" scene at the end of the game has its impact blunted, as the characters have to put it behind them and get on with the fight. Some might say these characters are being stoic with their decision to finish the fight and put emotions second, others might say they're running from their feelings. Both are probably correct. The bottom line is that none of the big moments from the final act and none of the main plot points are resolved, instead, leaving us on a cliffhanger, and a vague promise of a Gears 6. This game gives me hope that Gears 6 will be excellent but also leaves me bitter from a distinct lack of narrative satisfaction. Though, despite that, I can't deny the fact that I want to play more. 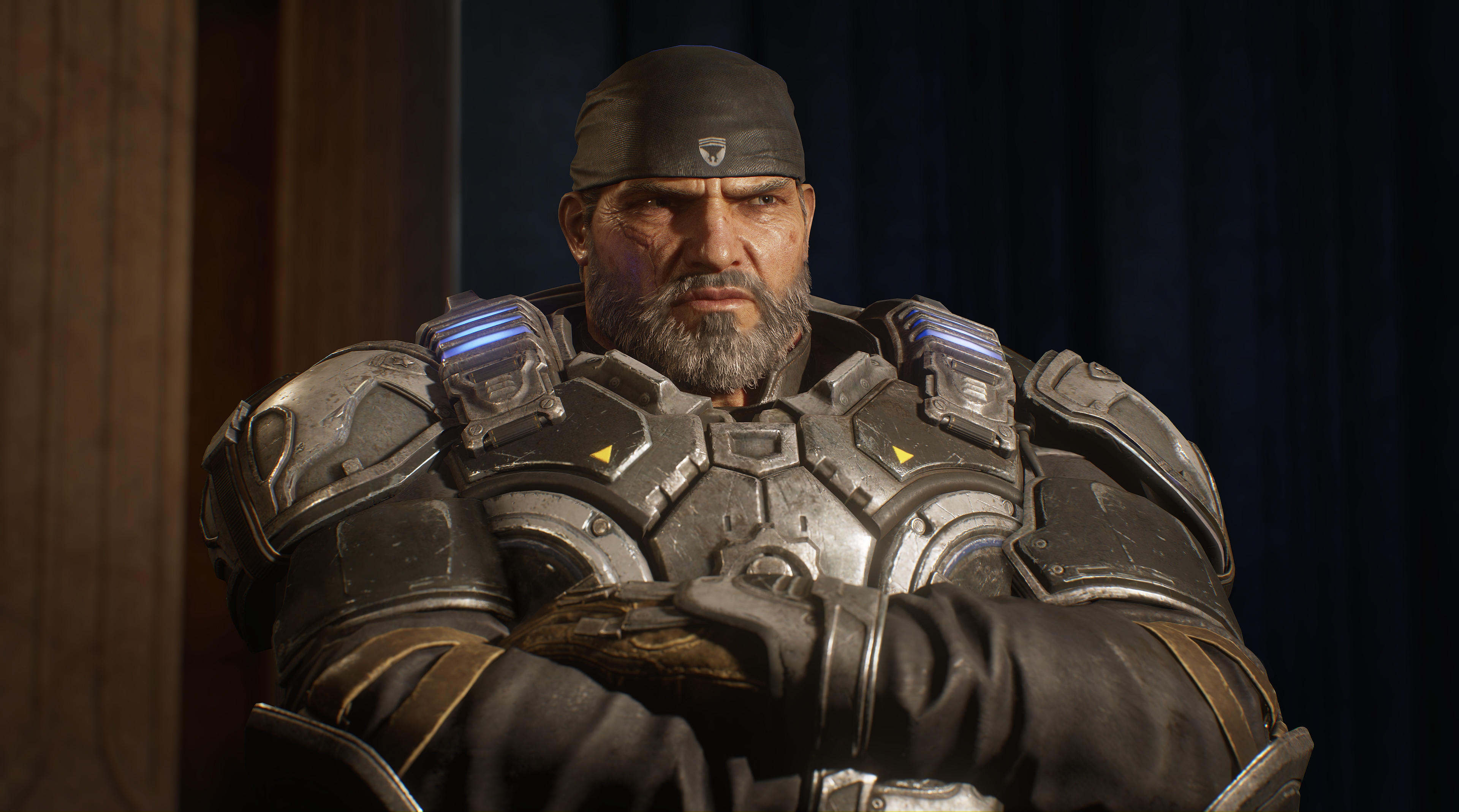 Of course Gears 5 also comes with the usual line up of multiplayer game modes, in addition to Horde mode. While multiplayer is about what you expect (pretty good when the servers are working), Horde mode has been changed, and feels more like a Hero-shooter, with your character selection making a much bigger difference. A special ability can buff yourself and your teammates, and you'll be setting up a base and carefully defending it from the alien horde. Enemies pop into view a bit too obviously for my liking, and unless you actually have a team prepared to stick through to 50 rounds, things will get disappointing. Having players leave and replaced by AI robots is incredibly annoying, and will see you performing far worse each time someone decides they've had enough. With a team of friends, though, it will be exhilarating

As for PC specific details, I found that on a 980 Ti GPU and Intel 6700k CPU at stock clocks, you can easily hold 1440p at Ultra settings and 60FPS for much of the game, though some cinematics may flag a bit when higher-quality character models are swapped in. Despite how incredible the game looks, it also runs incredibly smoothly, and less powerful rigs should find 1080p60 easily attainable, while 4K60 should be well within reach of more powerful GPUs. You'll find a much more in-depth technical analysis in Keith's article.

Reviewed on PC (code provided by the publisher). You can get the game for both PC and Xbox One by purchasing it through the Microsoft Store.

Gears 5 is excellent, albeit with a major narrative downfall. While the finale of the campaign definitely left a sour taste in my mouth, the game was so good that I want to keep playing the Horde and multiplayer modes just to get more Gears 5. The atmosphere and gameplay in the campaign were different to what I expected, in a good way, and I'm looking forward to where the series goes next and how this narrative finally finishes up in the sequel. Until then, this is the best Gears game in years, with an excellent multiplayer suite to back it up. Practically essential on Xbox One, and a great option for PC owners too.