G.SKILL has made memory modules since 1989, and has become a very well-known brand amongst enthusiasts for PC prosumer users who are looking to set world records or even have a computer that more than likely houses some of the best memory inside its chassis. We are looking at the G.SKILL TridentX F3-2400C10Q-32GTX from G.SKILL, a quad channel memory that is aimed for extreme overclocking and using the highest quality memory integrated circuitry available on the market. We cannot wait to get started on testing this Trident DDR3-2400 memory kit and really seeing what it has to offer in terms of some other leading competitors out there.

The G.SKILL TridentX F3-2400C10Q-32GTX is a single-sided DIMM which comes out to 54 mm in height measure to the top spreader. This is excellent from former dual-sided DIMMs for overclockers as the signal integrity is better with the fewer chip count because every bit of silicon and length path of PCB trace introduces capacitance onto the memory controller bus, which slows down signal transitions from sharp edges to slower slopes, thereby effectively decreasing the operating frequency of the memory controller bus. With the memory itself, we find that the actual memory contains memory modules by Samsung with the SEC 240 HCH9, considering Samsung themselves and many other manufacturers produce memory modules for more than one industrial application.

The G.SKILL TridentX F3-2400C10Q-32GTX memory has a nice housing structure with the red heatsinks which can be customizable for people who are using aftermarket oversized coolers. I myself am using the ever so illuminated Cooler Master V8 GTS, which may not pack a punch like Noctua’s offering in the high-end spectrum, but does a good job at a very bulked size. The TridentX F3-2400C10Q-32GTX memory kit really works well without the thermals as well provided that there is either water cooled memory bracketing on the chipset or a big 120mm side fan for air flow management. Below are the specifications of this memory kit.

Our TridentX series features a removable heat spreader fin to improve your cooling options. With the heat spreader fin, the increased surface area helps keep the memory cooler. On the other hand, with a system that already has a sufficient cooling solution; the fins can be removed to accommodate massive CPU coolers or other customized cooling solutions. Please refer to the following user guide.

Extreme overclockers look no further. TridentX will push your system to the limit that was once unimaginable. Not only available at high frequencies of 2400MHz, 2600MHz, 2666MHz, 2800MHz, 2933MHz and 3000MHz, but also available with extremely low timings at 2133MHz CL9, 1866MHz CL8, and 1600MHz CL7 achieved with 8GB module capacity!

All G.SKILL memory products come with a lifetime warranty and the G.SKILL technical team is always ready to provide consumers with complete technical support via online forums, telephone and email.

We tested the memory kit on a bench test platform with the i7-4770K and also got a ton of other memory kits I had laying around ready for a memory showdown comparison.

SuperPi is a fancy program that calculate Pi to a certain amount of digits and is very memory and processor heavy.

As we can see from the results, the Trident DDR3-2400 comes out on top over its RipjawsX brother. The difference is noticeable by almost 30 seconds.

WPrime is a multithreaded benchmark for x86 processors that tests processor performance by calculating square roots with a recursive call of Newton's method for estimating functions, with f(x)=x^2-k, where k is the number we're sqrting, until Sgn(f(x)/f'(x)) does not equal that of the previous iteration, starting with an estimation of k/2. In simpler terms - this just means that it uses iterative calling to make sure that the function of x is equal to the value of k through many x values.

This is where we see the higher memory kits rake in a higher second count. Though more memory is a great thing, more memory does come often with increased calculation latency. This memory kit from G.SKILL came in around 6.041 seconds to calculate functional integration whereas the Kingston FuryX PC3-14200 (DDR3-1775) performs the best out of them all with the same Cas Latency timing of 10.

x264 HD Benchmark is a benchmark that allows you to measure how fast your PC can encode a 1080p video clip into a high quality x264 video file. It allows for an easy comparison because everyone running it will use the same video clip and software. This is a nifty AVCHD test that really stresses memory caching for temporary video files.

Thankfully the TridentX DDR3-2400 came out on top, but it was given a strong run for its money by the Kingston FuryX PC3-14200 memory kit for a surprise that we did not expect. The RipjawsX memory did not scale well to encoding tasks and this could mean that the integrated circuiting is not as efficient with some calculations as others for the RipjawsX series or the FuryX by Kingston Technology.

CINEBENCH is a real-world cross platform test suite that evaluates a computer's performance capabilities. CINEBENCH is based on MAXON's award-winning animation software CINEMA 4D, which is used extensively by studios and production houses worldwide for 3D content creation. Nothing says memory/processor/graphics testing than Cinebench.

Cinebench results reveal that the Trident DDR3-2400 32 GB Kit comes out on top in both single-threaded and multi-threaded CPU result applications. It performed exceedingly well at Single-Threaded raytracing but really took a dive when it comes to the RipjawsX coming close to the DDR3-2400 monster.

Handbrake takes mkv files and converts them to mp4, which is very handy if you want to watch files on the Xbox One or the PlayStation 4 that are not XVIDs or are even high quality Blu-Ray personal rips that chug on .avi format and the usually unsupported MKV file format.

The Trident DDR3-2400 barely came out on top over a lot of other memory sticks. The application is once again memory and processor intensive  but it seems that this is not an area where a lot of memory sticks shine in general. Overall, the memory sticks did see a marginal gain.

Isn't it just fun to archive things super fast and save a few MB's in the process? Well, the WinRar benchmark utility allows users to test out their memory's write performance while also seeing their processor's performance in tandem.

We are so glad to see this DDR-2400 top the competition with WinRar. One thing is for certain as the AIDA64 write speeds previously revealed, the G.SKILL TridentX DDR3-2400 32 GB Memory Kit is a tough contender for practical applications such as WinRar.

Overclocking this memory kit proved to be a challenge surprisingly. We tried to increase the base clock and a lot of the times this resulted in the system not starting up. I increased the memory to 1.68V from the rated 1.65V and proceeded to up the base clock until it was stable at 110. Then, I managed to tighten the timings to 10-11-12-32 2T and this proved to be stable with a DRAM frequency of 1204 at minimal load (DDR3-2400). The overall memory speed ended up being 2540 MHz. This was marginal for real-world performance results and for synthetic results this is only where it would slightly benefit. 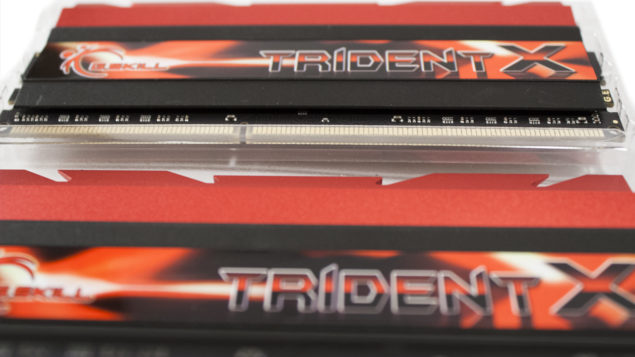 Overall, the Trident G.SKILL TridentX F3-2400C10Q-32GTX does everything that any consumer user would want. It provides good performance with decent compatibility for a nice price, which is what a lot of people can ask for. The performance gains on overclocking this thing by 50MHz is the only drawback, and overclockers will find themselves being limited in this aspect as we could barely get anywhere close to 3000 MHz/1500 DRAM for overclocking. Regardless, the memory sticks perform admirably well in a lot of the benchmarks outdoing a lot of the competition (mostly the RipJawsX series by G.Skill as the toughest competitor). All in all, the G.SKILL TridentX F3-2400C10Q-32GTX is a great buy for its price should you be looking for performance memory.