For Honor sounds like something I’ve been wanting for a very long time indeed – a multiplayer game with melee combat, a variety of warriors taken from across history, and the ability to shunt players off a ledge causing an untimely, frustrating, and hilarious death. It honestly sounds too good to be true – and in some aspects, it is, while in others, it outshines all expectations.

Based in a mythical land where space and time have seemingly had a meltdown and brought continents and historical eras crashing together, an evil warlord pulls some strings and sends the Knights, Samurai and Vikings into an all-out war – an absurd plotline, but a perfect excuse for multiplayer shenanigans. And, in case it wasn’t clear, multiplayer shenanigans is absolutely where For Honor excels.

Combat in For Honor is designed as a 1v1 experience – you lock on to an opponent, and hold your weapon in one of three stances, holding left, holding right and holding overhead. Flicking between stances with the right stick, holding your weapon in any of the three will ensure you’re blocking any enemy attacks coming from that direction. Handily, the long wind up for all of these moves, coupled with the flashing red arrows showing which stance your opponent is using, mean you’ll usually get plenty of time to prepare should you see a broadsword or axe being swung your way.

And in fairness to Ubisoft, they’ve found a solution to online melee combat that has been plaguing other games. Dark Souls III may have introduced a PVP battle arena, but unless you’re on a freakish low-ping connection, multiplayer is going to be filled with teleporting and missed strikes. Ubisoft clearly saw these problems coming and designed the bespoke slow-but-steady combat system almost as an answer to difficult connections and laggy games. 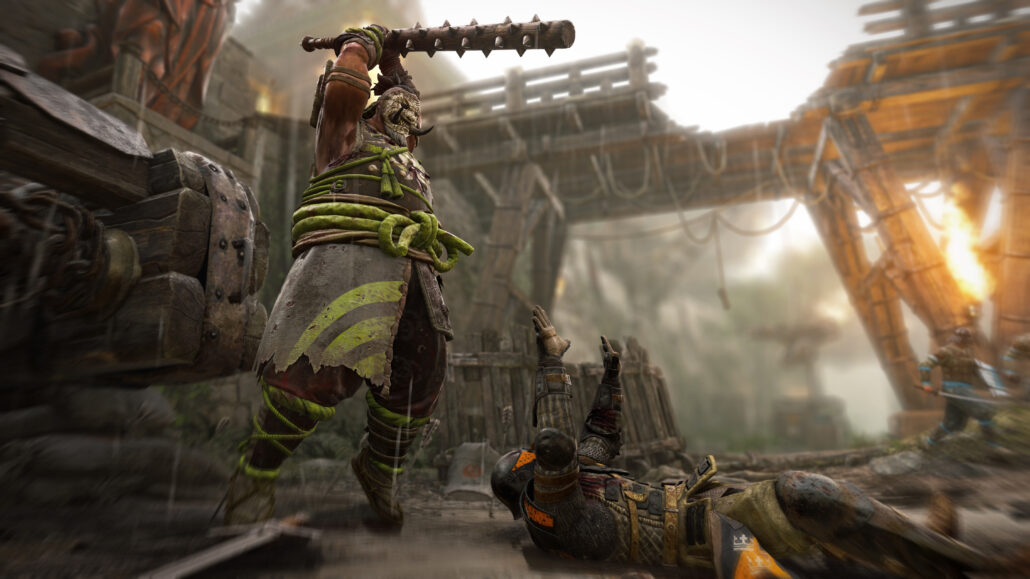 But that’s also one of For Honor’s downfalls – the pace of the game rarely feels anything but slow and plodding. In any given game of Dominion – the typical hold-three-objectives game type – you’ll find your chosen hero waddling across the map to capture points and encounter an enemy hero to do battle with once you arrive – that’s if you’re lucky. If you’re unlucky, then you’ll find your team has been doing God-knows-what for the entire match and you’ll be ganked by three enemy heroes. Even arrows flashing away, warning you that your end is nigh can’t save you from three swords at once.

And so, in that situation, what options are there? Well, it’s either fight to the (inevitable) death or… Run. And it has to be said, running and making distance truly ruins the For Honor experience, because it’s a stalemate until another member of your team appears – unless an enemy hero gets there first, in which case it doesn’t matter how well you fought up until now, the odds are officially stacked against you.

Ironic, perhaps, that a game called For Honor so quickly devolves into a multiplayer game lacking any real honor. Too often you’ll find players attempting to push you off a cliff or ledge, maneuvering around you trying to break your guard and shove you off the edge, before rubbing some salt into the wound with a quick taunt. 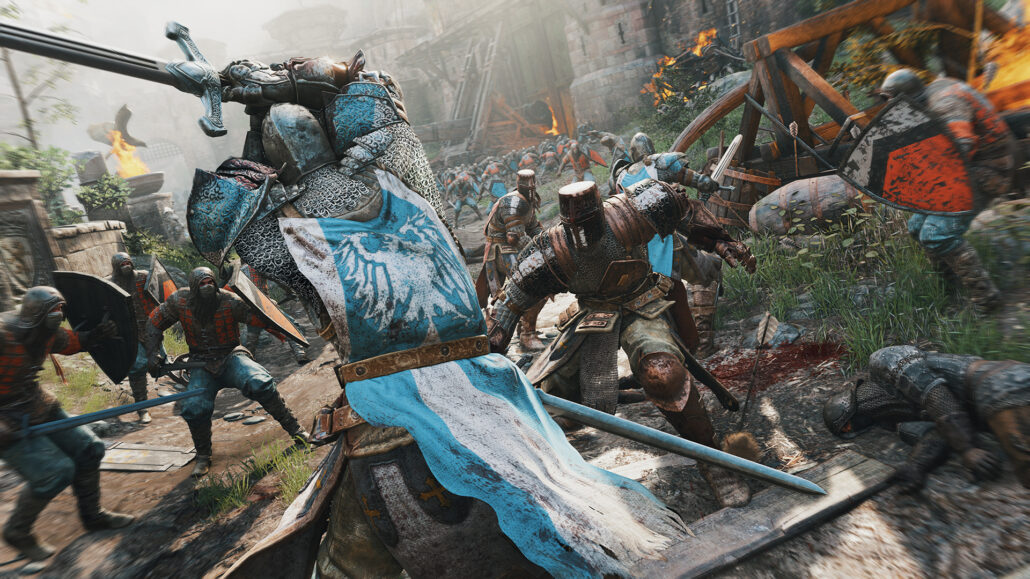 That’s why we have Duel, of course, the 1v1 PVP mode that anyone worried about a dishonorable discharge should be a fan of. Dueling against one other player, using only the stage layout and your own skills to win feels pretty exhilarating, admittedly, even if it’s still not fast paced or even all that varied.

Brawl, Skirmish and Elimination are all similar game modes, too, with Brawl offering a 2v2 game type, Skirmish earning points through kills and Elimination giving us a sudden-death scenario where the first team to lose all its players loses the game. Of course, couple a game type like Elimination with the tactics of run-away-to-not-lose and you end up with four burly bruisers chasing down a frightened enemy player – best advice is to ensure they don’t get the chance to revive their pals and maybe corner them with the rest of your team, if you get the chance.

But for those not too interested in multiplayer, Ubisoft have provided a full story mode campaign, one that is, admittedly… Not the best. In fairness, it’s less a deep singleplayer, and something more akin to an advanced tutorial. Each mission is ultimately a series of combat corridors you push through and beat enemies – and honestly, it’s borderline insufferable. Smaller enemies collapse after a single attack and don’t offer much of a threat either, meaning you just beat them one-by-one until they’re all gone. Enemy “captains” you can lock on to, like the enemy heroes you’ll fight in multiplayer. They work much the same way, but the AI bots haven’t quite gotten the hang of defending, meaning you can just keep whacking away as long as your stamina lasts – and it’ll usually guarantee victory. Area bosses are a bit more of a threat, with larger health bars, but honestly, not by much. But as I mentioned, this is closer to an advanced tutorial, slowly teaching the player higher level techniques, such as feints and the proper way to parry opponents. It’s a plodding, boring campaign, to be sure, but it does teach you everything you need to know for high-level online play.

Now, it sounds like I’m really down on For Honor, when in reality, in some aspects it really outdid all of my expectations, particularly in the multiplayer combat. Those initially long, frustrating swings eventually sink in and feel more like weighty strikes with a great metal bat – couple that with the fact that pretty much solve the problem of online connections for most players and you really cannot argue with the clever innovation Ubisoft is showing here. 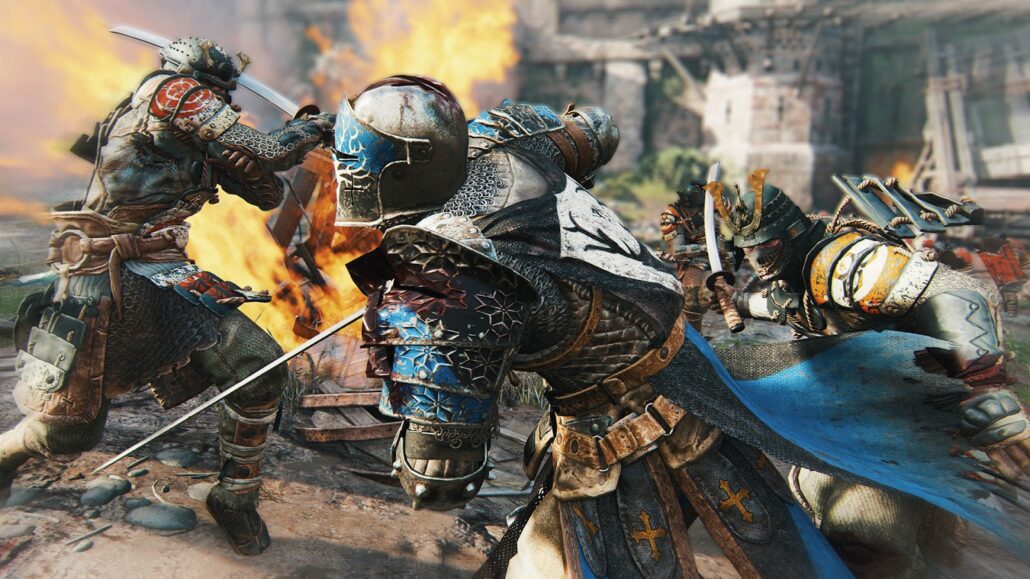 On top of that, all of the factions and classes are varied and interesting, if nothing else. You want to play, to unlock more classes, to play with a greater variety of weaponry and fighting styles – and each of those fighting styles offers a surprisingly authentic take on historical combat. Bonus!

For all of the failings of For Honor – campaign being one of them – there’s also a good deal here to praise. Although, the online servers certainly are not one of those things – days after launch the servers had problems, in the weeks following more problems occurred, and now Ubisoft is handing out “Champion Status” to players to make up for it. Unfortunately, I’m not sure that’s good enough in a game where you need to be connected to Ubisoft’s servers just to play Story missions.

For Honor has big production values and great combat, but a myriad of issues - server stability being chief among them - prevent it from being a classic.