Final Fantasy XIV and I have had quite an estranged relationship for just about the entire life of the past two PlayStation generations. I was there from day one on PC with the collector’s edition that regrettably did not include a tumbler and had a myriad of design flaws before the game was notoriously nuked and the servers shut down when Bahamut attacked in a moment that heralded in the end of 1.0 and remained one of the most infamous moments in MMORPG history. I had largely stepped away from Final Fantasy XIV and forgotten about it until A Realm Reborn picked up the pieces of the destroyed online landscape to become a redemption story unlike any other. I sported the New Gridania colors and fought alongside Cid to charge a rebellion against the Empire in 2.0 and then, well, stopped. I wasn’t too sure exactly what kept me from playing, could’ve been a combination of community, time, and money, or a lack thereof. Truth be told, I hadn’t thought about returning to Eorzea until a new expansion arrived that was said to scratch that single-player story itch, Final Fantasy XIV Shadowbringers.

Even with the better part of half a decade separating me from the last time I stepped into the shoes of a bard, Final Fantasy XIV Shadowbringers felt equal parts familiar and mysterious. My loot and linkshell were right where I left them, but so much of what I vaguely remembered about being a bard had changed in past content expansions that I couldn’t quite tell exactly what was new to Shadowbringers. I had to undergo a deep dive and rediscover that all of those songs I used to sing to buff the party members were changed to instead provide various forms of additional damage as the bard, a far cry from the supporting role I once loved. Sure, bard’s can still provide some damage mitigation or extra accuracy, but whatever happened to be able to help restore MP during a black mage barrage?

Shadowbringers opens up with the requirement of being level 70, the previous cap established in Final Fantasy XIV: Stormblood. Rather than residing in a new region of the map, players must first venture off to Mor Dhona and pick up the main scenario quest called ‘The Syrcus Trench” after completing all of the previous main scenario quests. From there, players are transported to another place and time in a region known as The First, where light touches as far as the eye can see. 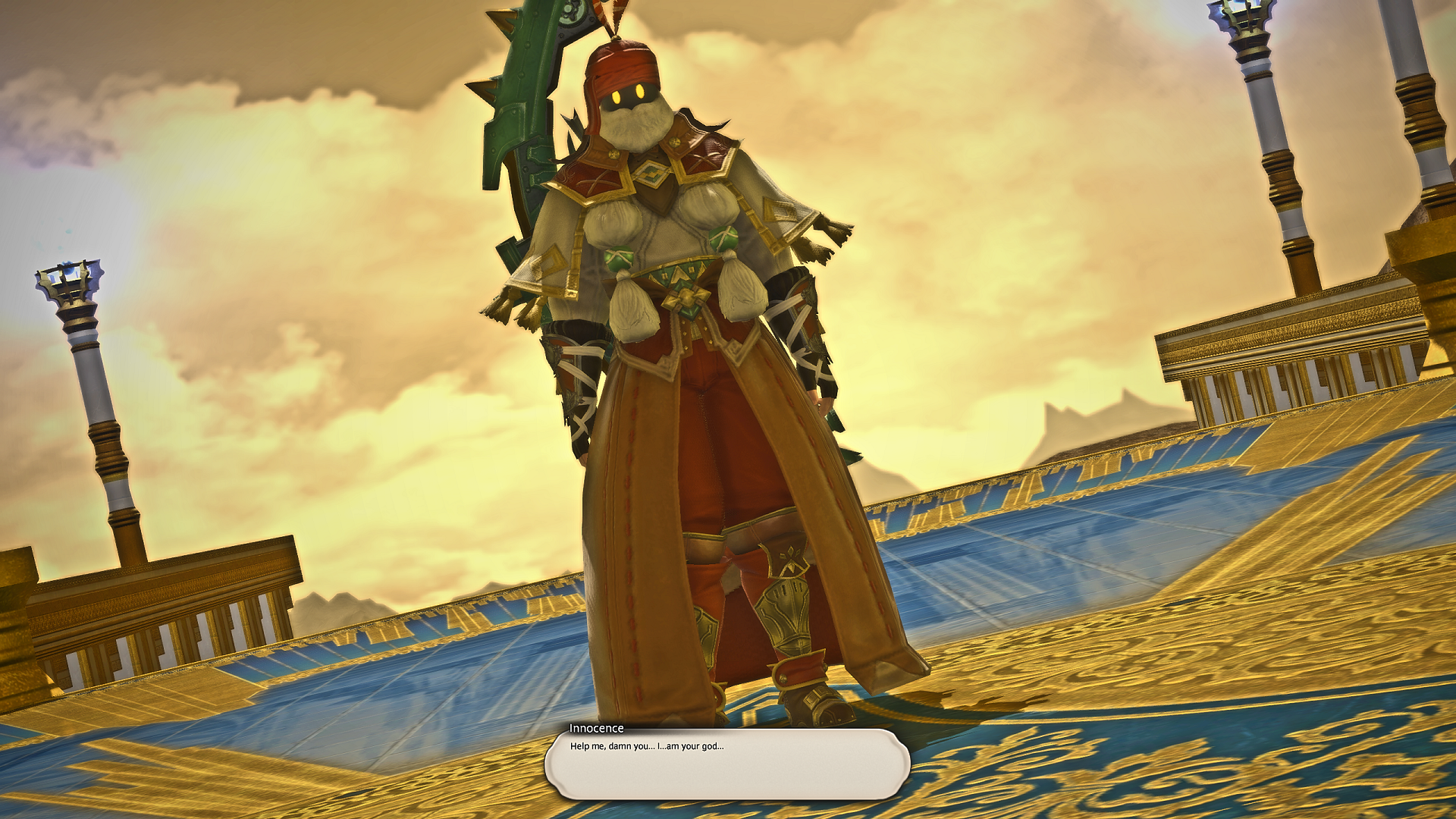 The First houses a diverse number of regions that encircle The Crystarium, the new major hub city for the Shadowbringers expansion. From here, players have access to all of the modern furnishings (well, no Mog Houses) that they would need: market boards, levequests for gathering and crafting roles, and dozens of quests to aide them in leveling up their adventuring class.

Shadowbringers’ story revolves around the player, once hailed as The Warrior of Light, having to reverse his role and become a Warrior of Darkness instead. The First is illuminated by eternal daylight, brought forth by angelic beasts known as Sin-Eaters. These divine horrors have been kept at bay and prevented from overtaking The First for quite some time, but enough’s enough. As the Warrior of Darkness, the player is tasked with venturing out into the various regions of The First and slaughter them one by one. Of course, as with any proper MMO, that experience is never to be undertaken alone. Along the way, players will routinely enter dungeons crucial to the story and will have the option to venture off with a light party of fellow players, or for the first time in FFXIV, venture off with key NPC’s like Alisaie and Thancred in the new Trust system. Save for the 8-player trials and raids, just about every piece of content in Shadowbringers can be enjoyed as a single-player story if you so wish. The story as a whole is better enjoyed if you can simply enjoy it at your own pace once you have a character up to level 70. So many of the story and side missions fall into the typical MMORPG tropes of fetching items or killing a select number of enemies to cull the local wildlife.

A friend once told me that Final Fantasy XIV exists as an amusement park and that much still holds with the latest Shadowbringers expansion. Continuously throughout the main story, players venture through various zones that while seemingly detached from one another, each host a slew of nostalgic moments and references that have persisted throughout the long-running JRPG franchise. The Viera and Hrothgar (Ronso) are the most obvious examples of this, being the two new races that players can chug a bottle of Fantasia and transform themselves into, but each zone has a theme that links together with the series as a whole. One of the final zones players will reach as part of the main story pits them in service of dwarves to reach a landmark by the name of Mount Gulg, which some players might recall from the very first Final Fantasy and various guest appearances since.

The various zones and regions of The First are all quite memorable in their way. One hosts a shantytown filled with people waiting to be invited into Eulmore, a palace of great opulence and home to FFXIV Shadowbringers’ other hub city, another is home to the Viera and has one of the catchiest tracks in Shadowbringers’ soundtrack (La Hee!). The final region of Shadowbringers, which I’ll omit from mentioning by name to prevent players from being spoiled, has some great promise of architecture and design in the southern half, but because it comes so late in the Shadowbringers’ story, feels quite underutilized and thrown together. Perhaps if future patches expand on the region, it could be one of the more interesting zones in Shadowbringers from a thematic perspective.

In a lot of ways, Final Fantasy XIV Shadowbringers tries to make both the latest expansion and game as a whole more accessible to those not looking to adventure in a group. Solo play is more viable than ever, letting players play through nearly the entirety of Shadowbringers’ main campaign without the aid of other human players. The new Trust system brings in storied NPC’s to venture alongside the player into every standard dungeon in Shadowbringers’ with a few minor caveats: standard party makeup is still required (two damage dealers, a healer, and a tank), you can’t do Trial fights with Trust NPC’s, they won’t pull every mob and nuke them with AoE attacks for a quicker clear, and once the player dies, it’s considered a complete party wipe and you can’t be revived by the healing NPC. To offset, you do have the honors of taking every piece of loot that drops and NPC’s all know the trickier fight mechanics, so if it’s your first time doing a particular dungeon, you can follow Alisaie or any other NPC around and let them be the first to react to those glowing orange puddles of damage.

The changes inaccessibility in Final Fantasy XIV: Shadowbringers does have some changes that longtime veterans might not feel too warm too. From my time experiencing a variety of roles, I found that many of the classes felt homogenized to one another. Tanks largely feel similar to one another and the various tank stances have been converted into a simple toggle that gives you increased enmity, reducing the need to worry about higher enmity attacks at the cost of slightly lower damage output. MP is another major change that completely changed how caster classes would have to focus their gear and materia stats (any direct stat increases materia were also removed from Shadowbringers). Instead, players have an MP pool of 10,000 from level one without any possibility or perks to increase that number to a higher value. TP has also been removed (good riddance!) from every player, meaning no more having to wait for it to refill after Sprinting around the map or burning it all out at the beginning of a fight. Now my bard can fire arrows all day long and sing his song without any fear of downtime. Wish I could say the same for black mages, as the radical MP cost changes mean I can only get a couple of fully-attuned Fire III casts off before my entire MP pool is drained.

Endgame content is a tricky balancing act for any MMORPG to follow. You want to have enough content available at launch for the hardcore folks to have something to do once they max out their character levels but still have enough content to keep them coming back week after week after the weekly cooldown timers reset. The reason I’m so late in penning my review is that I wanted to see this content firsthand, as some of it wasn’t available at launch. Square-Enix left the first set of Eden duties off the launch window and only released them for the first time just over a week ago. The whole series of four boss encounters so far are all Final Fantasy VIII themed, from the zone where you get a bit of story content that plays the world map theme (Blue Fields) to the various boss fights that reward one lucky player with a miniature Eden Prime minion after clearing. It’s a perfect fit after including the Gunbreaker class and Squall’s iconic gear as part of the new expansion. These four trial fights each drops a preset number of Eden gear tokens that can be cashed in each week, although you’re only permitted to get one token per fight each week.

Each piece of gear requires a certain number of Eden tokens, from just one per accessory to a full set of four for both chest and leg pieces. Thus far, I’ve only managed to get my accessories and gloves from the weekly Eden challenges with the rest of my gear coming from cashing in Tomestones and repeatedly taking on Titania’s EX raid fight to unlock a new weapon. By limited the amount of gear that players can earn each week, it prevents players from burning out on over-grinding while still giving them a weekly challenge to look forward to. If I’m able to clear all four Eden trials on a Wednesday, that gives the rest of the week to play at my leisure (or not at all and work on another title for review). That’s a smart change and I am grateful that Shadowbringers can respect my time as I certainly don’t have the free time I once had when FFXIV 2.0 first debuted.

There’s a lot of content on the way for Final Fantasy XIV: Shadowbringers, but I won’t factor that into my final review score. Savage challenges are slated to drop today with the 5.05 patch and more Eden trials are among the items on the release schedule, but most importantly, a whole new raid series that ties into one of my other favorite Square Enix titles. Sometime in 2020, Final Fantasy XIV: Shadowbringers will release a raid that ties the MMORPG to the world of NieR: Automata. Even if I take a break from Shadowbringers after getting my bard all geared up, I will certainly be back for some new Yoko Taro content.

Reviewed on both PC and PlayStation 4 Pro.