I've re-wrote the intro for this review of Fairy Tail six times now. Why? Well, I wanted to say something about how with a game based on a license, there are always going to be pitfalls. Do you follow the rigid story already found in the canon? Do you create your own story, placing it in a gap somewhere, but then have to balance the already-known strength of the characters? Maybe you just say 'sod it' and create a game like the Dragon Ball Xenoverse series.

All of these options have their merits, but it's always best to go with one, rather than a mixture of two or more of the above. This is something that Fairy Tail seems kneecapped with very early in the game and it persists throughout. Does this mean it's bad? Does it mean it's good? Well, that's something that you'll find out very soon, as you read through this review. What I will say for now is "sexy animé girls".

I know, I shouldn't criticise a game based on an animé for the fetishism of large-breasted, tight-bottomed, flawless-complexion... where was I again? Right, the characters. Maybe I'm forgetting something, but I don't remember Lucy posing before a fight, showing off her ample cleavage and giving a sly wink as if to say "let's get it on" to boost the rest of the team. To get a discount in a shop, sure. Anyway, the characters look great with animé style visuals that always age well and they look like the source material, only with extra costumes to unlock and have them look as you want them to.

Gust, having developed the long-running Atelier series were never going to get it wrong on the aesthetic front. Animations are smooth, well detailed and very showy when it comes to battle. In and outside of battle, with the in-engine cutscenes as well as the pre-rendered cutscenes, it all looks and sounds great, from the voice acting to the battle effects and soundtrack. I will always be in favour of using the original Japanese audio, there's no janky lip-syncing to worry about then.

At least there shouldn't be. It's just a shame that the audio plays around eight to ten seconds before the pre-rendered cutscenes. There aren't that many either, so how they get that wrong I'll never know. It got to the stage where I was skipping scenes, if only because I already know the source material and because those particular scenes weren't showing off Lucy, Erza, Mirajane or some particular action that I really wanted to see, despite the pre-emptive audio.

I mentioned the story right at the start, you're likely wondering what I mean. Fairy Tail actually follows two sections of the manga and animé, these being the Grand Magic Games arc and the Tantaros Arc, with the end of Tenrou Island being used as a tutorial. Eclipse Celestial Spirits is simply not mentioned and Sun Village is relegated to a few images and a quick voiceover. Honestly, it works. It doesn't lose any of the key story beats so you needn't worry if you're new to the franchise. There is one major problem with the story though, the pacing.

Before I get onto that, because there's a fair amount of negativity coming, I want to say that I've had a fair few laughs with the game. Some parts of the game have the characters bouncing off each other well, little scenes for the game that make you like the characters and should really be useful for those not familiar with the series. For someone who is, it's fitting and comedic, it works.

Anyway, this is where it comes in about Fairy Tail having that mixture of following a rigid story and creating its own. At least it would if it created an engrossing narrative to draw you in. If you're not a fan of Fairy Tail and the characters within the property, so much is going to be tepid, meaningless, busywork. If you don't know, the guild (Fairy Tail) has been missing for seven years because the ghost of a former guild leader pooled together the power of the guild to survive a devastating attack by creating a fairy sphere, it just so happens time stops inside as well... Just read the wiki.

All you need to know is that since you're starting fresh, the guild has no power, your characters have no power and it's time to start all over again. There are bits of story here and there, all following little questlines over time. It could be stopping a group of thieves, who just so happen to be stealing because they spent all their money on search parties for you. Maybe it's to stop a group of monsters that just so happen to like stealing skimpy underwear, which of course most of your female characters wear. That or there's one of many reasons to visit the handful of areas within the game, killing whatever monster of the day it happens to be this time.

All of this is to build your character levels, your guild rank, your character rank in the guild, the bond between your characters, the level of the different facilities within your guild and the equipment (Lacrima) your characters can use. I have never been so glad that there isn't a system where you choose and level up different abilities because there's so much to manage already and later on when you can bring in a host of extra characters to your list of 'friends', you're looking at an MMO's worth of time to get all of them to top rank and with a max bond to each other.

It wouldn't be as big of an issue if it was managed in a different way, but you gain experience and obtain general items through killing enemies. You increase the bond between characters, gain character rank points and general guild rank points through completing tasks. These tasks don't really differ from any others, like ones that require you to get special items to upgrade your guild facilities by, you guessed it, killing enemies. Well, not always, sometimes you can also be tasked to go to an area and simply pick the item up. It's all annoyingly monotonous after a while because it becomes a massive grind at times, some quests demanding you raise guild rank to proceed.

What doesn't help is that you don't really come up against a big variety of enemies. Of the ones you do come against, you'll find variants of a higher level that are just a different colour which is just a cheap cop-out. I don't want to fight a yellow version of the same dog I've killed a million times. Nor do I want to fight a purple golem with glowing lines, it's the Stone Golem in drag, I've already killed it a load. It's a shame because I love the turn-based combat system thanks to the grid system.

Before I talk about that, though, I want to praise the AI because for a decent amount of Fairy Tail you'll get guest characters, before you eventually make them your friends, that you don't get to control. They'll fight alongside you and honestly, they perform admirably well. The attacks are what I'd do myself, for the most part, and they make sound, tactical decisions when picking off enemies.

So, combat. As I've said, it's turn-based. While your characters, starting at three and eventually moving up to five, stand in a line, your enemies take up room on a three-by-three grid. It offers for some interestingly large battles in the game and also allows for huge enemies, like dragons, to naturally take up much more room than what a single person would. The best part about it, however, is that the attacks you have at your disposal impact different squares and with different strength. Combine this positioning with monster weakness and it can be surprisingly satisfying to pick off even multiple enemies at once while leaving one alone that could absorb your attack.

So far, so good. Adding onto this is also a fairy gauge for your whole group and an awakening gauge for each character. The fairy gauge is essentially a super attack, allowing you to chain together multiple attacks, creating massive combos and eventually an utterly insane amount of damage as it attacks every single enemy on the field. Awakening, on the other hand, allows you to build it up fully and to trigger it, unlocking new moves, healing your character or other effects depending on the character. Otherwise, you can use part of it to perform a follow-on attack. There's a massive amount going on but, unlike with other aspects, it all merges perfectly well together and creates something engaging and interesting.

If I were to say anything, Fairy Tail feels like an Atelier title but restricted due to the license it's based on. What was alchemy is now magic and shop or city development is now guild development. This isn't an open-world game, but one with a number of maps that are mostly linear with a few branching paths blocked by obstacles. What I like is how the monsters roam around the map and you can destroy the obstacles by fighting near them, requiring anything from 500 to over 100,000 damage in one single attack to destroy.

So, do I like Fairy Tail? I've really enjoyed my time with the combat system and I do like the story and some of the smaller elements, though it helps that I'm familiar with the original work. On the other hand, there is way too much busywork and some aspects offer a little too much fanservice, even though Fairy Tail generally offers that, then you have the issue that the audio track is around eight seconds out on the pre-rendered cutscenes.

I didn't answer if I like Fairy Tail. It's alright. I've spent over thirty hours with it and if I wasn't enjoying myself I would have turned it off long ago. I can still accept that - at times - I've been pretty bored. If you like Atelier, you'll likely like this. If you like turn-based JRPG's with some nice additions to the combat, this will work for you. For all its flaws I'm probably going to get it on the Switch. 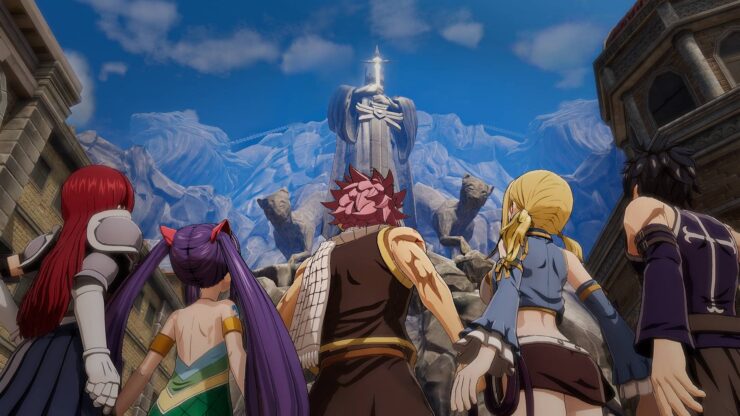 Fairy Tail is a very similar game to the Atelier series, only one borrowing characters and story direct from another source material. The story here, based on two separate narrative arcs, works well with how it's laid out and is laid out in a way that doesn't stop newcomers to the franchise. Other aspects, however, are mixed. The turn-based combat is far more tactical than the average JRPG, offering an interesting grid-based system that helps to keep it engaging. There's a decent amount of character interaction and humour to be found within but the massive, overhanging issue is that the quests and the game in general demand far too much busywork of you in terms of building your guild, character relations, character and guild ranks and more than I care to remember. Fairy Tail has somehow managed to keep my interest but I can't deny it has too much grinding that gets boring.