F.I.S.T.: Forged in Shadow Torch is a fursona, diesel-punk, Metroidvania game that, despite its rather unorthodox approach to the genre, is a strong example of classic design and modern storytelling. You take on the role of a rabbit with a huge robotic fist strapped to your back, your primary weapon against the Iron Dogs, an Orwellian organization that controls the grease-stained city you live in.

At the beginning of the game, you’ll first be treated to a long cutscene that does little to explain the details of the world but still dumps a lot of exposition for you to mull over. The developers clearly have a story in mind, a world of history that you see only a fraction of, but often it comes across as shallow and simplistic from your perspective, at least at first. The characters are archetypes of the anime veterans, with stone-faced heroes rubbing shoulders with happy-go-lucky friends and desperate optimists. In FIST, the bunny you play as is broken in spirit while his friend and former comrade, a literal bear, is more personable. Dialogue is also written like anime, full of cliché and drama, whereas a more subtle approach might have been more effective (although we are talking about diesel-punk furries, so maybe not).

Once you’re introduced, at least partially, to the world of FIST, you’ll take the reins and begin your exploration of the city. Other modern Metroidvania games like Ori and the Will of the Wisps have worked hard to make their worlds feel organic and spacious. You are not exploring a set of rooms and corridors but a vast forest of treks and glades, with curved edges and flowing natural architecture. F.I.S.T.: Forged in Shadow Torch is not one of these games; it's rather old school. You are exploring a series of boxy rooms broken up by corridors. These corridors might have the set dressing of a street, but they feel tight and claustrophobic. This works absolutely perfectly for the game's dystopian design and oil-stained nature, however. It also feels more like a Metroidvania. Branching paths break away from the ceiling and improbable walls, forcing you to utilise platforming alongside combat. The whole world has this rigid, difficult feel that screams it was designed by robots rather than animals.

Even the map looks like old-school Metroidvania games with no hint of vanity or an attempt to hide the world's hard edges. It's something you might appreciate about the game when you start, but it quickly ties itself to the world and becomes as oppressive as the Iron Dogs, making it all the more fun to demolish them. The art design also mirrors the level design, with streets cluttered by all the trappings of a semi-futuristic slum, while the interiors are filled with gears and machinery that should have huge ‘risk of death’ signs plastered across them.

The combat takes a little more getting used to, though. When you first start playing, you’ll have roughly two combos to choose from – a series of quick attacks or a couple of heavy blows. This makes your first half an hour or so a little clunky and repetitive as you explore the early sections of the game. But once you’ve discovered the means of unlocking new combos, the experience opens up. It can still be a bit slow going, with the cost of each new combo becoming quickly more expensive, but even once you’ve unlocked just a handful of options, you’re guaranteed to have more fun in combat encounters. The difficulty of the game shouldn’t be understated either and can be quite surprising in points. While the first boss and beginning several areas are relatively painless for anyone used to 2D brawlers, some rooms demand a much more adept hand.

The combat has clearly taken some inspiration from everyone’s favorite video game comparison, Dark Souls, and given you the ability to heal a handful of times that replenishes only when you reach designated safe areas. This means that taking any damage can be crippling, and some rooms are filled with a fiendish array of armored, ranged, and berserker enemies that quickly become overwhelming. A steadier difficult curve might have been nicer, as grinding to a halt because of a random corridor can feel a little disheartening.

Along with new combos, you’ll also discover new abilities at regular intervals. These can often be used in combat but have a much more satisfying use in exploration. In true Metroidvania style, these abilities can be used to access areas previously locked away, allowing you to find more collectibles, coins, and paths with other treasures at the end. The map handily keeps track of everything, including how much is left to discover in each location and what type of obstacle blocked your path, so you can easily retrace your steps when you’ve got a new tool. Where this suffers is that despite the open exploration of F.I.S.T. Forged in Shadow Torch, several areas can only be accessed in one direction. This can often lead to you bashing your head against a door that opens from the other side, unsure of how to get there. Naturally, once you’ve reached the finale, you’ll have everything you need to discover every secret the game has hidden away. It's just a shame some earlier ones can be obscured in other ways.

The story is, as suggested earlier, a little hard to engage with. While exploring the world is great, the characters feel a little two-dimensional, and their history – alongside that of the world – is a little monolithic. For the most part, it can be forgotten about as you leap into new area after new area, which sometimes introduces new mechanics. One section has you disarmed and forced to sneak through a facility of security devices, for instance. It isn’t always a smooth ride, and often you’ll feel the game is a lot more comfortable with you robo-punching everything and moving on, but it is still a nice change of pace.

F.I.S.T.: Forged in Shadow Torch is a great Metroidvania with a few teething problems. It clearly had a lot of development time put in, and it shows. The world is hugely explorable and steeped in the diesel-punk oppression you love to fight against. The combat warms up and switches between power fantasy and a fantastic challenge. While its story feels shallow compared to its other components, the world more than makes up for the simplicity. It's just a shame that years of Disney have ruined everything but the most realistic fur physics. 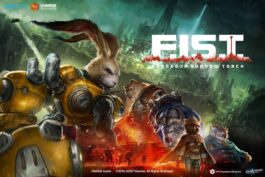 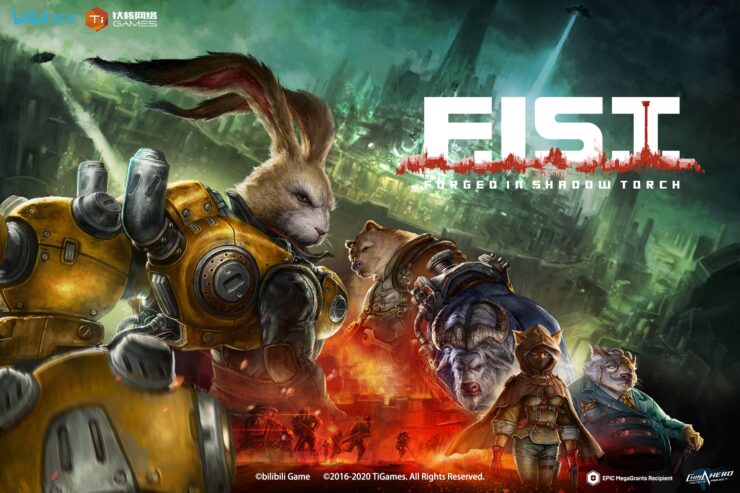 F.I.S.T. Forged in Shadow Torch throws a lot of different things at the wall and tries to make them all stick. In the end, it's a bit of a messy mix of platforming, combat, robots, and animals that Dr. Robotnik would be proud of, but it's still great fun to play even if it doesn't make a lot of sense.