When I'm playing a horror game, particularly one where there's a creature that's is designed to put you on edge, one where you should be abjectly terrified of, It's never a good thing when you're typical reaction is "not this f-ing c... again" (fill in the blanks). Expedition Zero left me with that reaction all too frequently. Frankly, I'm at the stage where even seeing the game's title ends up with the same response. It's not that there isn't a good game here or at least the glint in the milkman's eye version of a good game; It's just that the game is mired in so much (metaphorical) shit that I didn't enjoy the vast majority of my time.

So, after that rousing start, you may want to read on. Maybe you'll find you're interested in the game?

Asterigos: Curse of the Stars Review – An Odyssey of the Soul

Let's get technical before starting on the gameplay, what I liked and didn't like. I'm generally quite forgiving when it comes to bugs. I fully appreciate that games will never be perfect, even in the bigger titles where they've got an army of QA testers. I can't forgive whenever the most basic of things crop up. Let me give an example: You have a battery. You can expand your capacity to 200%. This battery is immediately set back to 100% whenever you load a save or travel to a new area. Such a glaring game-impacting bug should not exist for a fundamental part of the game.

Sticking to the technical aspects, I have a few other issues. I've had a few times where I've loaded a save only to find a bit of progress missing. Nothing major, and, honestly, I was save-scumming. However, what annoys me is that the game seems to be suffering from the spooky creature that causes static to appear on your screen. That is to say that the game crashes far too bloody often. I can try to load an auto-save only for the game to throw up a critical error notification. I'll try to reload a save a little before that; critical error. Try the same save a few times; the game will eventually load up. Why these critical errors occurred, nobody knows. I doubt Expedition Zero even knows.

Issues like this are a problem; there's no other way to put it. When you're getting into the atmosphere of a game, being dragged out by major technical issues that can't even decide that they're a genuine problem from one attempt to the next isn't helping the game. One significant bug that hit me, which did recreate itself, was my inability to travel back to the safe zone. I'd click travel, and Expedition Zero would revert everything to before my first visit, only I was locked in the cabin with no way to escape. At this point, my only option was complete the game without looking backwards. Fortunately, I could.

So, completing Expedition Zero, what's the aim? You're in some walled-off area that's very bloody cold, and you need to find out how to stop the spooky stuff going on, the stuff that killed all the scientists and soldiers. It's time to go to the forest after starting up at the safe zone and crafting a helmet lamp in a 3D printer that can disassemble anything in the world. This forest has several samples of "the virus" lying around, including a glowing deer, floating human remains in a tube, and red glowy vines.

We're told it's a virus by some broke hiding inside a building next to the wall that reportedly surrounds the area, but we'll never know. Why? Because while you can visit some other locations, you only ever see a few parts of the wall. I'm also not aware of any virus that makes a spooky girl start flying in the sky or letting ethereal arms claw up from the ground that isn't in the middle of a graveyard. However, when you reach the end of Expedition Zero, you find out it's not so much a virus but a Cthulhu-esque creature in an old power plant or rocket silo? Not sure.

It's not even really a spoiler. There is something right after this creature, the actual end of the game, that would be a spoiler, and I won't talk much about it except to tell you that the developers, Enigmatic Machines, have used the ending as clear sequel bait. It's okay, but a lot goes unused and unexplained unless I'm missing something. As you find some of the closer samples, the random bloke at the wall tells you of new areas you can visit.

The shop area is bare, and I'm not sure why it exists other than to give you a place to salvage more materials. The farmhouse has another small section with a monster that will kill you if it catches you. Well, not quite, since I've had it see my light, walk up to me, walk away, walk back up to me, twist around about three times, walk away, walk up to me and finally insta-kill me. It's a little broken. There's also a school; I think that was there to hold one item you need to access the end-battle-thing.

Partway through playing Expedition Zero, I moved from my old 2560x1080 ultrawide monitor to my current 3440x1440. I mention this because if there's something that Expedition Zero does well, it's the atmosphere. It's not the best looking game in the world, but with the combination of fog, snowstorms, and the often-too-dark lighting, with the pretty damn good audio, you've got a recipe for success. The environment as a whole is a puzzle you have to solve. You can only get so far without freezing your giblets off at the start of the game, so you need to find another 3D printer that lets you print a thermal suit; only the rivers give off toxic gas, so you need to print a gas mask to get past.

Do you see where I'm going? It's structured to stop you from going too far before you have to detour elsewhere. It doesn't tell you where to go, but you'll probably figure out by the random guy saying that you can now go somewhere else, in a thick Eastern-European accent. Some of the dialogue doesn't match the text shown, but it's honestly far better than most indie games developed in the region, so while I've mentioned it, I'm not going to hold it against Expedition Zero.

Not when I've got so much more to hold against it. Now I get back to where I started, the enemies. The majority you face are slow-moving zombies/infected, ones that are even slower at swinging whatever weapon they happen to be holding. They offer zero challenge, only slowing you down as you chip away at them, only really stalling you as you freeze to death or your battery keeps running out. The only other enemies are the annoying flying ghost thing that stalks and attacks you as if you've just stolen her favourite pair of knickers and the earlier mentioned broken one-hit-kill creature.

Do I like Expedition Zero? No, I don't. It's got some decent ideas, and the pacing is decent, excellently using the environment, but there are a few too many annoying elements. The few great moments, such as the spooky ghost church, are outweighed by trudges like the shop and farmhouse where you're just wading through zombies, far more worried about your body temperature and battery than the shambling monsters. Still, I completed it, which is more than I can say for most games these days. 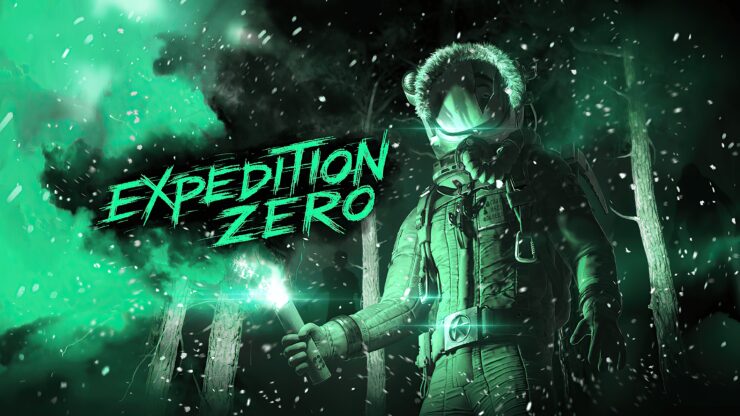 Expedition Zero is an interesting game with some good ideas and exceptional atmosphere use. Still, the positives are let down by several bugs, issues around areas of the game feeling unfinished and other frustrations. There's certainly a chance you'll have some good moments with the game, but I can only imagine these moments will be outweighed by other less fun and more annoying moments.